Info – Bygonebungo – … The land to the south-west of the village was cut off from Maxwell’s farmland of Titwood with the coming of the railway in the 1840s but remained agricultural apart from A & T Hamilton’s Titwood Brick and Tile Works, which sat approximately halfway down the Queen Square/Marywood Square back lane. The original feu disposition of 1860 between Sir John Maxwell, and William Stevenson & John McIntyre for the building of modern Strathnungo refers to compensation to be paid to Alexander Hamilton, brickmaker in Glasgow and Thomas Hamilton, brick and tile maker, Auchingray Brick and Tile Works, Carnwrath, since they would be required to vacate the site, although the business remained until dissolved in June 1862 …

01/10/1856 – Glasgow Herald – Titwood Tileworks for let – The tilework on the farm of Titwood and Estate of Pollok, will be let for such a number of years as may be agreed on. It is situated one and a half-mile from Glasgow, on the Pollokshaws Turnpike Road, and has a connection with the Glasgow and Barrhead Railway. The clay is good, and coals are in the immediate neighbourhood. Apply to Wm. Colledge, Factor on the Estate, at Hillhead, by Pollokshaws; or at 69 St. Vincent Street, Glasgow. Sept. 1856. 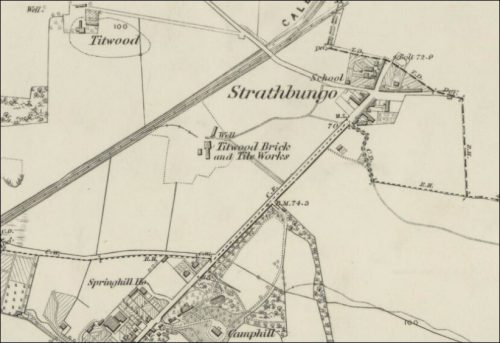 1858 – 1861 – ScotlandsPlaces – Titwood Brick and Tile Works. A small brickwork on the farm of Titwood.  A Hamilton. Mr Ronaldson occupier Titwood.

(In 1859 the Titwood Brick and Tile Factory was demolished and a gated residential suburb to the south-west of Strathbungo began when Alexander ‘Greek’ Thomson together with the builder John McIntyre built 1-10 Moray Place.)

06/06/1862 – Glasgow Herald – Notice – The copartnery carried on by the subscribers as brick makers and brick builders in Glasgow, under the firm of John McIntyre was this day dissolved by mutual consent. 04/06/1862. Signed John McIntyre and Alexander Thomson.

The subscriber, John McIntyre who now carries on the business alone, will uplift and pay all debts due to or by the late company. Signed John McIntyre and Alexander Thomson.

By 1877 – Austin and McAslan had transferred all their nursery growing to the Titwood Nursery, which lay in the Glencairn Drive area of Pollokshields.  The Coplaw Hill site then became the brickworks to meet the demand of the construction activity taking place in the area.  The brickworks were known as Coplaw Hill Brickworks; Strathbungo Brickworks and also Nursery Brickworks. 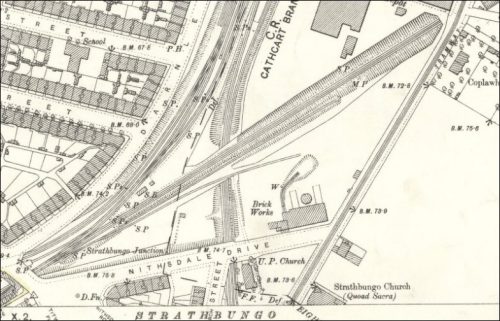 Bell, Hornsby & Co. were a building and contracting firm, and one of many brick manufacturers in the Glasgow area. From the 1860s to the 1890s, local brick was widely used for factories, and for the internal and rear walls of stone-faced commercial and domestic buildings.  ). Of the original partners, Alexander Hamilton seems to have been the longest-established, manufacturing bricks at Lilybank off Eglinton Street, on the south side of the city, from about 1852.  He expanded into tile making, operating from a second brick works at Strathbungo in 1858, before becoming a ‘silent partner’ in Bell, Hornsby. Another partner, Robert Bell, possibly ran a bricklaying firm in South Wellington Street c. 1857 (he is not to be confused with the wealthy Wishaw and Broxburn industrialist of the same name, who was also a brickmaker). Other partners were John Thomson Hornsby and Alexander Whitelaw, a Greenock-based builder.

By 1875, the partners had taken over Polmadie Brickworks, Rutherglen Road, with its clay pits nearby at Mallsmire Burn. Brickmaking was a seasonal activity; since clay digging was impossible in winter when the ground froze, and good weather was important for initial drying. Rather than pay for the upkeep of draft horses over winter, the brickmakers, including Bell, Hornsby, sold them off. As a supplementary activity during the closed season Bell, Hornsby erected one or two blocks of tenements at a time (probably using their own bricks) in the fast-growing working-class area of Polmadie. Of the 46 tenements built there, Robert Bell, house factor, and John Bell, mason’ were proprietors, and therefore the likely builders, of five.