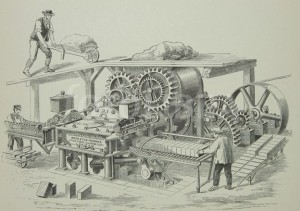 1830s – By the 1830’s several skilled engineers in the Calton district of Glasgow commenced the manufactory of machinery for drain tile makers and potters. They had a particular eye on this expanding Ayrshire market. One of these was a rather eccentric inventor called David Neil whose products were highly regarded in the trade. These were offered in the Ayrshire Advertiser in this rather quaint notice: –

Mills for grinding and cutting clay. David Neil takes the liberty of thus expressing his sincere thanks to the noblemen and gentlemen of the West Country who have kindly favoured him with their orders for mills for cutting and grinding clay, and to assure them, and the public in general that no exertions shall be wanting on his part, to execute any orders he may receive, to the entire satisfaction of his employers.

D.N can with confidence recommend a new, and greatly improved, mangle which he has brought forward. It occupies but small space and is not easily put out of order, and does the work in a superior manner.

D.N has been recommended to draw the attention of those gentlemen who keep dogs, to a newly constructed iron bedstead which, for convenience, can be put up through the day to prevent the bedding from being destroyed, as well as giving so much additional room in the kennel. When folded up, it only occupies about 7 inches from the wall. 33 & 31 Struthers Street, Calton.

19/12/1855 – North British Agriculturist – Brick making machine. In your paper of last week it is mentioned that a gold medal of honour has been voted by the jurors at the Paris Exhibition to Mr Clayton for his brick-making machine, which will be considered as a high compliment, coming as it does from such a source, and will no doubt be duly appreciated by the exhibitor. There is a numerous class of brick and tile manufacturers will be anxious to learn the novelty of this machine, and its capabilities, how it was exhibited, whether at a regular brickyard or in an apartment of the Palace, whether tried with exhibition clay or by the usual material taken promiscuously from the brickyard, whether the jurors had an opportunity of testing its capabilities, with the usual methods of brick-making now in use, or comparing the article with others when finished. I am induced to put these queries, and from experience have occasion to remain somewhat sceptical till they be satisfactorily answered.

A few brick machines were lately introduced into the neighbourhood of Glasgow, at a great price, from England, and with very high commendations from the patentee; but on their being subjected to the regular ordeal of a brickyard, and getting every fair chance by experienced workmen, they were found unsuitable for the purpose, and at variance with the statements given, consequently they were abandoned after having incurred much expense and putting the manufacturer to very great inconvenience.

I will take an early opportunity of sending you the principle of these brick machines, the causes which led to their failure, the brickyards where they were tried, their original cost, &c., all which are necessary to be made public, in order that parties may be fully satisfied before embarking in the speculation. A few years ago when the southerns were seized with a mania for bringing out pipe and tile machines, many of the manufacturers and landed proprietors north of the Tweed, (albeit their proverbial caution), were induced to speculate, and became purchasers, but I believe in every instance felt disappointed, and numbers abandoned such gimcracks altogether, after many fruitless attempts.

One cause of failure in these machines may be attributable to using coarse clay, another in having overstrained anticipations of their working powers, from perusing the glowing eulogiums regarding them by the makers, and also by the injudicious mode of parading them, more especially in the English periodicals. A chief reason I believe why so many similar attempts have been made and failed, may be justly ascribed to the fact that few of the contrivers know anything of the practical part, and are not acquainted with the component parts of the clay from whence the article is to be manufactured. Had they been practically versed in the manufacture, from the preparation of the raw material to the burning process, they never could have had the temerity to recommend or give out such machines to the public as has been done.

In conclusion, I may remark that amongst manufacturers there should be no delicacy in exposing the many fallacious attempts of interested parties, so as to prevent such crude productions from being patronised by the unwary. B. December 17, 1855.

Thomas Constantine Fawcett was born at Armley, near Leeds, on 29th April 1839.

Having developed in early youth a strong natural taste for mechanics and engineering, he commenced his career in the works of  Sir Peter Fairbairn, Wellington Foundry, Leeds, where he was employed for a few years.

Thence he went to complete his apprenticeship with Messrs. Greenwood and Batley, Albion Works, Leeds, where after a few years service he was made foreman over a department in 1859. In this position, he continued for three years until 1862, when he started a business for himself as a maker of engineers’ tools at Victoria Works, Shannon Street, Leeds.

About five years later he took up brick-making machines as a special manufacture, and was highly successful in all kinds of clay-working machinery, particularly for making wire-cut bricks from semi-dry and stiff plastic clay. Of this machinery, he made many complete sets, besides many special adaptations to meet peculiar varieties of material; and also various special engines and pumps.

In 1886 the concern was removed to the Whitehouse Engineering Works, Hunslet Road, Leeds; and in 1895 was formed into a company, enabling him to leave the management in other hands, and to seek a little well-earned rest after having been in active business for thirty-seven years.

He died at his residence, Parkhurst, Chapeltown Road, Leeds, on 27th October 1899, at the age of sixty. 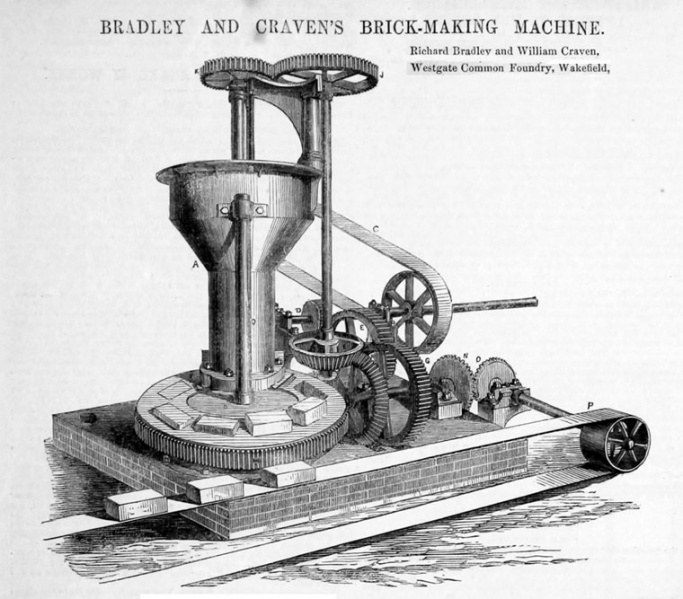 1869 – Slaters Directory, Scotland did appear to have their own brick machine making companies as per the adverts below. 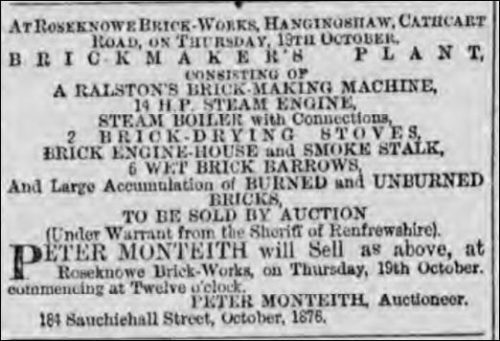 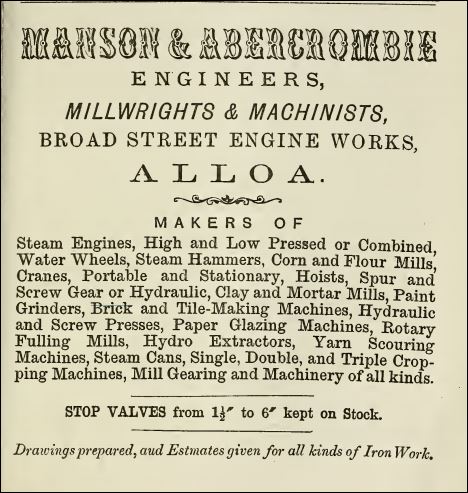 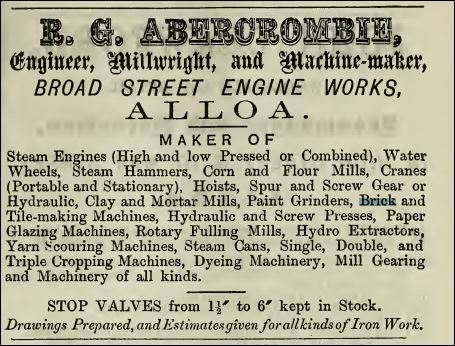 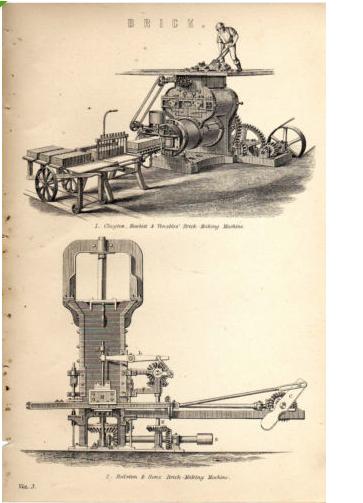 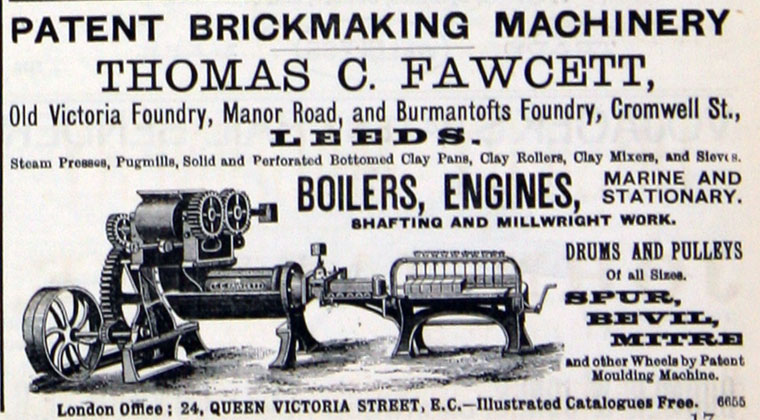 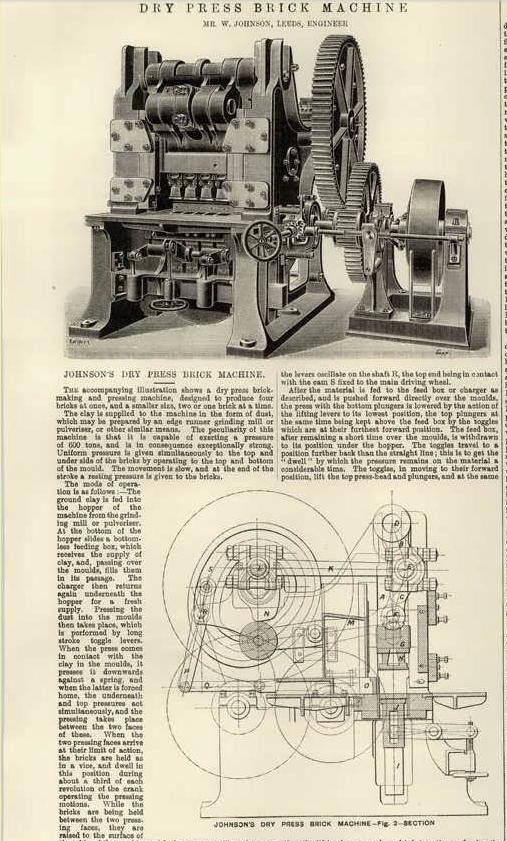 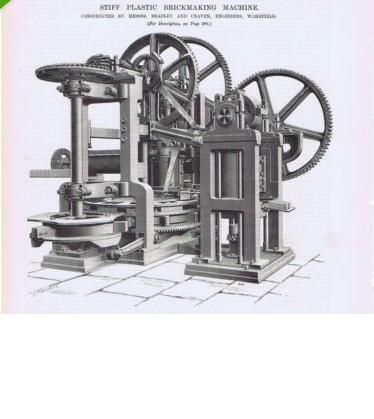 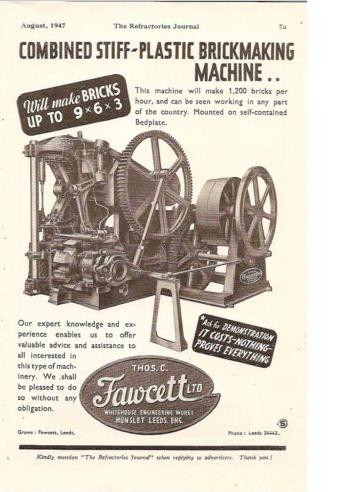 The ‘Craven’ side of the business was founded by William Craven and Richard Bradley, two young engineers who produced revolutionary machinery for automating the production of bricks. By 1853 the company’s’ Stiff Plastic Brickmaking Machines were being sold throughout the UK and to many overseas markets, including South Africa, Germany and Australia.

The product portfolio grew in 1972 when Bradley and Craven pooled their resources with rival Leeds firm, Thomas C. Fawcett, yet the pioneering spirit remained.  Today, in partnership with Joseph Rhodes, investment in research and development remains as essential as ever to the development of the Craven Fawcett business.

The company was founded in 1843 by two young engineers, William Craven and Richard Bradley to manufacture what was then revolutionary machinery for automating clay brick production. Their 1853 patented ‘Stiff-Plastic Brickmaking Machine’, in combination with the Hoffman continuous kiln was responsible for changes in the industry which eventually saw it shift from a handcraft to a mechanized production line. Their machines were manufactured at the Westgate Common Foundry in Wakefield and were sold throughout the United Kingdom as well as many overseas markets such as Australia, South Africa and Germany.

The company also made steam engines, colliery winding gear and exhibited in the 1862 London International Exhibition.

In 1972 Bradley & Craven, amalgamated with a rival Leeds company, Thomas C. Fawcett, forming Craven Fawcett Limited.  However, the name continued in use with a new private limited company of the same name incorporated on 1 October 1998 and dissolved on 30 July 2002.