Canmore – Original brickworks built for the manufacture of firebricks in the mid-19th century and superseded (probably about 1930) by a new brickworks of the same name, which incorporated the blowing-engine house and two chimneys of the former Dalmellington Ironworks

Dunaskin Fire Clay Works  –Dalmellington – Dunaskin Fireclay Mine was owned by the Dalmellington Iron Company from 1866 to c. 1920. They also mined at the Pennyvenie mine and at the Jellieston mine, Patna. They produced taphole clay for blast furnaces and only ever made a few firebricks in the early years. Their biggest product was the manufacture of building bricks. William Baird & Co. Ltd bought the Company c. 1931 and rebuilt the brick kilns.

1855 – 1857 – ScotlandsPlaces – Dunaskin Brickworks. A substantial building one storey high, and slated erected by the Dalmellington Iron Company for making fire brick and tiles &c such as they require at the furnace. The clay is procured from a shaft (Worked by an engine) in Dunaskin Glen and is considered to be excellent for the purpose ironstone is found in the same pit the clay is conveyed by horses to the kilns and worked by an engine ready for moulding. 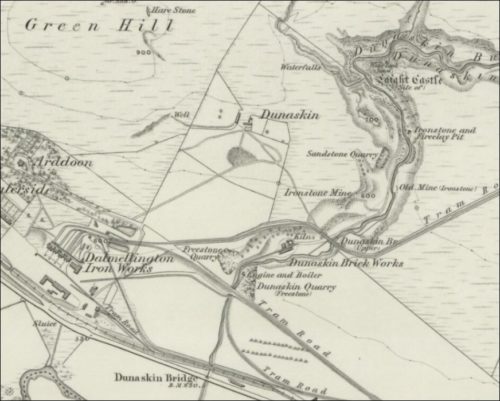 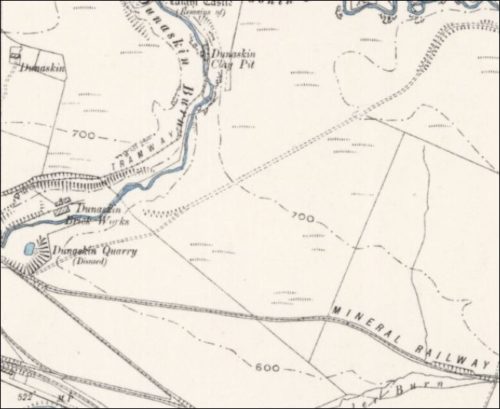 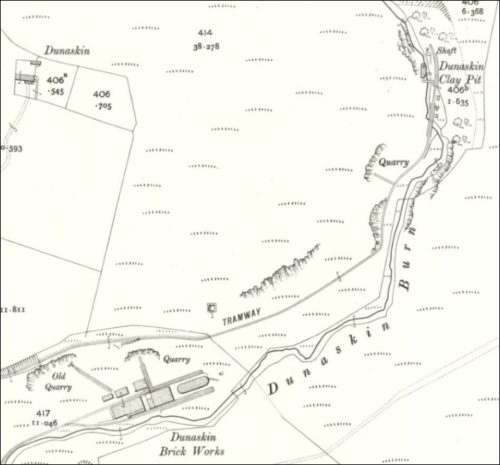 17/03/1936 – The Scotsman – Bairds and Dalmellington Limited, 4th ordinary general meeting … Additions to your Annbank Brickwork were also brought successfully into operation in July and a new brick kiln was commenced at Dalmellington which, I am pleased to tell you has been producing bricks as from the end of last month. I am glad to say that the demand for the Company’s production of bricks continued to be good in 1935 and that the increased make available for disposal was readily absorbed. Further improvements in connection with screening and other plant have been carried out and the process of mechanisation underground carried a stage further. The Company’s properties and plant have been efficiently maintained …

Below – 1938 – 1953 – Dunaskin Brickworks. (No buildings are shown at Dunaskin Brickworks as detailed here. It is believed that these works were abandoned by the time Bairds and Dalmellington Limited built the new kilns in 1935). 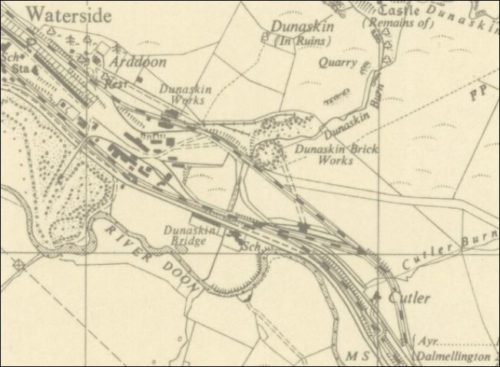 29/03/1938 – The Scotsman – Bairds and Dalmellington Limited – Favourable results of years trading … other major items of capital expenditure included … the erection of an aerial ropeway to handle supplies of material for the Dalmellington Brickworks. We also completed an extension to our Buccleuch Terracotta Brickworks, Sanquhar … the brickworks were actively employed throughout most of the year, though during December there was a slackening in demand due to weather conditions interfering with building operations …

25/09/1940 – Dumfries and Galloway Standard – Short time at Sanquhar Brickworks -The employees of Sanquhar Buccleuch Brickworks, owned by Bairds & Dalmellington, Ltd., are presently on short time. Last week they worked the first three days and were idle the last three. A superior class of bricks is manufactured at this works and apparently, the demand for these has slackened off.

1947 – 1969 – The 1985 publication ‘A survey of Scottish brickmarks’ suggests the works were operated by the National Coal Board during this period. 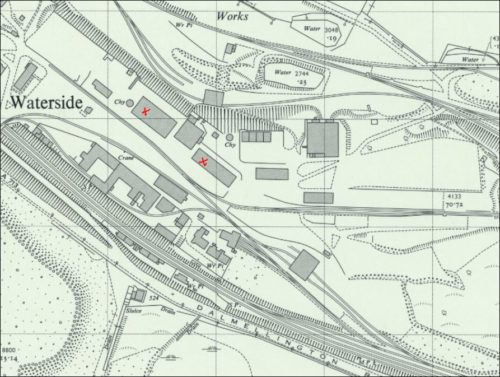 1969 – 1976 – The 1985 publication ‘A survey of Scottish brickmarks’ suggests the works were run by the Scottish Brick Corporation. (Note – SBH – This does not fit squarely with the 1970 entry below, which still has the NCB as operators?).

22/10/1971 – The Edinburgh Gazette – Factories Act 1961, Employment of women and Young Persons Act. In accordance with section 117 of the Factories Act, 1961, the Minister of Labour hereby gives notice that, during the month ending 30th September 1971, he has made special exemption orders relating to the employment of women and or young persons at the following factories: … Scottish Brick Co. Ltd.3 Dunaskin Brickworks, Waterside, Dalmellington  …

Below – The following photographs and description are believed to have been written by John Dinwoodie in 1999.

Below – This is a Bradley and Craven brick machine No1, which produced 1,400 bricks per hour, two of these machines operated at the Dunaskin Brickworks since it was built in the 1920s to early 1930s. In fact, the machine which produced bricks for the Staffordshire kiln actually worked for many years up at the old brickworks in Dunaskin Glen, where it was steam-driven. Both machines operated until 1956 to 1957 when they were replaced with No 2 Bradley and Craven machines. These new presses doubled the production thus ending the nightshift and reducing the workforce. These double machines were in production until the brickworks closed in March 1977. The old machines were ‘line shaft’ driven whereas the No 2 had individual 75 hp motors. All the machinery was removed from Dunaskin to Skares Brickworks, Cumnock in 1977 where it lay and rusted until it was removed for scrap. The only part of the Dunasking machinery remaining is the old type Fawcett ‘Incla’ pan mill in the Pan House.

Bradley and Craven brick machine No1 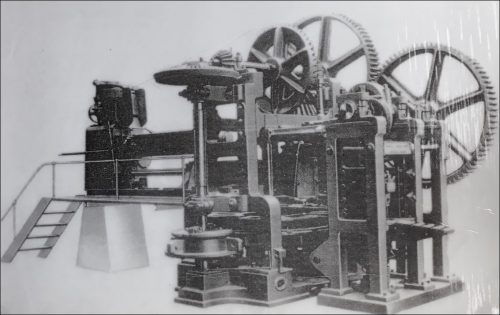 Bradley and Craven brickmaking and pressing machine No2 – This machine was invented and manufactured by Badley and Craven. It is of similar design to the No 1 machine but of larger proportions and has a much greater output of bricks. It comprises of two mixers (one single and one double shafted as on page 51) pugmill, circular rotating table revolving on a roller bearing and fitted with special chilled iron double mould boxes and a powerful press with dies. The operation of the machine is the same as described for the No 1 machine with the difference that the bricks are moulded and pressed in pairs. The machine produces the best quality bricks per hour and in some case where the quality is not so very important, an output of 2,400 bricks per hour is possible. Approximate nett weight of the machine is 27 tons. Approximate floor space (including mixers)  22′ 6″ x 16′ 0″ by 11’3″ high. 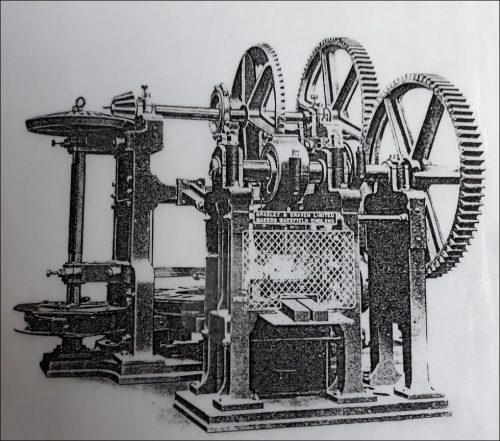 Below – This is a photograph of a series of Craven Fawcett ‘Incla’ pan mills. This is the most up to date type. These were the make of pan mills that were operated at Dunaskin Brickwork up until its closure. These mills were capable of grinding 8 ton of clay an hour. This clay then being fed into the No 2 Bradley and Craven machines. The pan mills were 11 feet in diameter with an overhead drive. Prior to this type of pan mill at Dunaskin, we worked with the 9-foot diameter Bradley and Craven flat bottom pans. These were a good type of pan but they could not sustain the tonnage of clay required for the new type of presses. This was the reason for installing the ‘Inclas’. These new pans were very difficult to maintain due to the incline of the pan grids and replacing the main scrapers. They were more prone to ‘caking’ the clay, especially in wet weather. This reduced the output of the material from the pan mill which in turn reduced the green brick production. To make up for the loss of brick production, we had to work overtime to maintain our weekly target of 200,000 bricks. 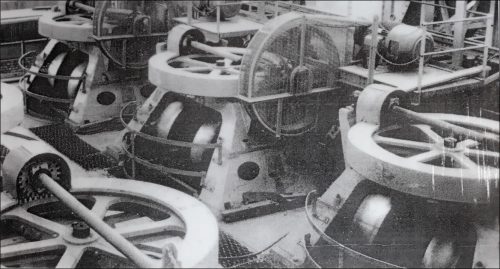 Below – Overdriven grinding mill (open base type). Grinding mills are amongst the most important machines in every branch of the clay working industry and these have received so much special care and study that we (Bradley and Craven?) offer them for all classes of work with the firm knowledge that they will give every satisfaction. Our mills are powerfully constructed with particular care being given to the general arrangement and design to ensure the highest possible efficiency.  The centre of the mill or that part on which the material is crushed is of solid metal, the outer portions being fitted with perforated grates over which the ground material is spread by scrapers. The powdered portion of the shale or clay passes through the holes in the grates into a hopper from which it is elevated to any desired position. The crushing rollers are fitted with renewable hoops or tyres and bushes, the steel roller spindle is in halves, the footstep of the latest ball bearing design. All parts of the mill are accurately machined and fitted, the pan itself being of the ‘built-up’ type with the rim in six sections, providing easy removal of the rollers for re-trying or bushing when necessary. Grinding mills are made in sizes ranging from 11′ diameter, all of which may be made with receiving dish if required. Approximate nett weight of 9′ mill = 15 1/2 tons. Approximate floor space of a 9′ mill is 12’6″ x 11’3″ x 9’6″ high. 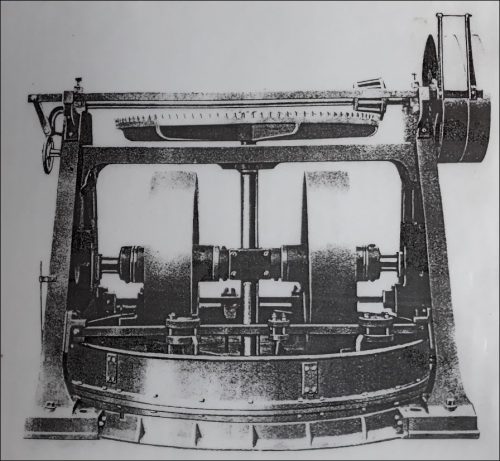 Below – A view of Dunaskin Brickworks. 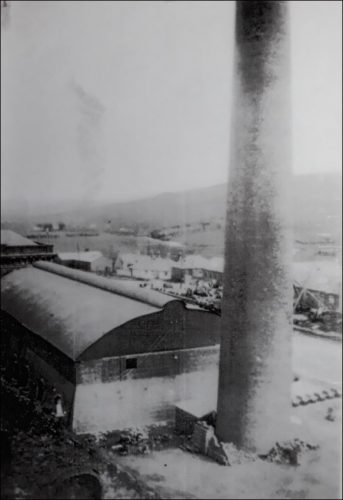