I have added this post for interest’s sake. I do not know if Mr Arthur was Scottish but he invented an early brick making machine that made bricks by pressure only.

08/08/1857 – Paisley Herald and Renfrew Advertiser –  Highland Agricultural Society Show – Among the new machines is one for the novel purpose of making bricks and tiles from common earth by pressure. The patentee Mr G.T.P. Arthur has spent many years and much capital in bringing it to perfection and he undertakes with the greatest facility to make bricks or tiles from any description of earth without any previous preparation and in any weather.  From the great pressure brought to bear upon each brick in making, they can be safely used for interior purposes without burning. The patentee has these machines already in operation in Madrid and is present under large contracts with the Spanish Government for the supply of bricks. It will be exhibited in full operation.

21/10/1857 – Glasgow Herald – Arthur’s brick making machine  – Our readers may remember that we briefly called attention to this machine at the time the Highland Society held their exhibition of stock and implementation on the Green.  The machine was then only in the process of construction.  Since that time it has been completed and may be seen at work in the establishment of Messrs. Steven, Little Hamilton Street.  It is no easy matter to convey and correct idea of a piece of machinery by mere words.  There are always some portion of the design which must be studied in model or diagram.  Fortunately, however, this very admirable tool is not only most perfectly adapted for its work, but also so simple that a verbal description may be read with advantage by those who have no opportunity of seeing it at work.  It may not be out of place to mention here, that this machine is not like many which have done good service in the mechanical and engineering arts, the results of many experiments, or of an accident.  Mr Arthur was requested to invent and construct a machine to make bricks without clay or water-and he did so.  This is no small matter.   He had been employed in Spain in the manufacture of bricks, where the material either could not be had suitable for the ordinary methods of brick-making or only at such enormous prices as made bricks almost as dear as one of the precious metals; so that his invention not only makes bricks out of materials not hitherto used but without water, in a country where that element is sold by the wine glassful.  But now too, the machine.  In the first place, as indicated, bricks can be made by it of any sort of earth, as thus;- at the one end, there is a cylinder slightly inclined from the horizontal at its outer end.  This cylinder is kept constantly revolving by means of a locomotive engine of four horsepower, which drives the entire machine.  The outer end of the cylinder is of solid metal, and within it revolves in an opposite direction, and at a different degree of speed, a series of chopping blades, which eat and triturate the earth which is cast into the cylinder, just as it is dug from where the machine may happen to be required.  This triturated earth passes slowly down the incline until it comes to a portion of the cylinder which is constructed like a sieve, with reticulations of about half an inch each, through which it falls upon an endless band of leather, and by which it is carried to an endless chain of small buckets like those on the dredging machine.  These buckets carry the pulverised earth up to a hopper in that portion of the machine which forms the bricks, and the manner in which they are formed remains now to be told.  Beneath the hopper, a small wheel revolves vertically, and on its periphery, with their mouths placed outwards, are arranged a series of dies or mounds, into which the earth falls from the hopper, only in such quantity as will make on brick.  During the revelations of this die-loaded wheel, it passes under a piston which is moved up and down by a cam, and as each die passes, the earth receives the full force, equal to many tons, of the piston, and is pressed into a solid and handsomely formed brick ready for the kiln.  When each die has reached the lowest point of the wheel’s revolution, another piston comes into action which forces the compressed block of earth from the mould, whence it falls upon another endless belt of leather, and is then ready to be carried to the kiln.  Having this attempted to describe how this machine makes bricks, it may not be amiss to say a word about the quantity and quality of its work.  The rate at which the machine works, with its handsome and very economical little four-horse engine, enables it to throw out with ease 25 bricks per minute, or about 15,000 per day and requires no more than three or at most four men to work it, whereas the same number of bricks made by hand and in the usual way would require not fewer than forty men.  Besides, hand-made bricks require to lie drying for several days before they can be put to burn, whereas these machine-made bricks can be kilned as soon as made.  And as to quality, we can vouch from actual observation that before being burned they are almost as strong as many burned bricks-e.g., we saw a strong man lift one of the unburned bricks fresh out of the machine, who, lifting it over his head, threw it four times down upon the hard floor of Messrs. Steven’s machine work before it broke.  It is scarcely worthwhile after what we have said too recommend Mr Arthur’s machine to the brick manufacturers of Scotland because we think that two or three of them would do all the brick-making required on this side of the Tweed, but we think that in England, where so many miles of brick are constantly being required, it would be found to be an admirable and economical assistant to builders and contractors.

Below – 10/07/1858 – Paisley Herald – Tests using Gabriel Arthurs new brick making machine on mine waste fail and they are to re-assess the machine using dug clay as a source material. 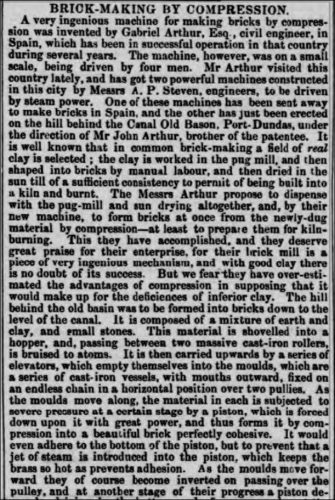 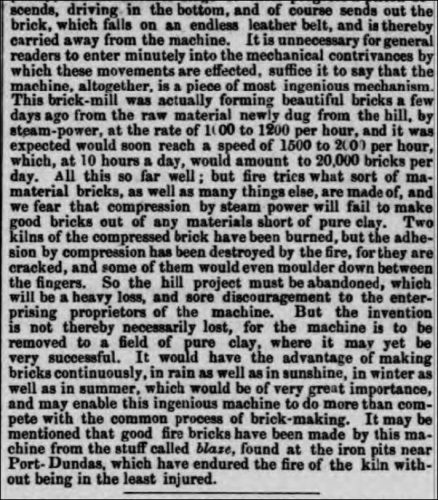