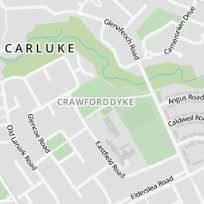 The article that follows was compiled by a member of the Carluke Parish Historical Society.

In the new statistical account (1845/6) volume 6) it was noted that “clay fit for a variety of purposes such as brick making and pottery manufacture” was abundant in the Parish of Carluke, and that “large deposits of white plastic clay” were found “in the Braidwood lands at Thorn & Co” although there is no mention of any works in production.

These early sites show all the typical characteristics in layout and location in a part of Lanarkshire which was fairly rural, but which benefited from the fact that the mainline of the Caledonian Railway ran through the centre of the parish, and some had access to mineral railways or sidings eg Castlehill and Braidwood.

Castlehill was situated by a coal pit which is interesting since it is marked as a brick and tile works, whereas the works at Scoularhall and Caledonian were marked as originally tile works. Neither had sidings and neither were in close proximity to a coal pit.

Both Law and Scoularhall were very near the sites of later works (Carluke and Whiteshaw Tile Works) and the site of Braidwood Works also changed between the 1850s and 1890s.

Scoularhall, Braidwood and Caledonian Works are good examples of the layout of earlier tile works with typical long drying sheds. All of the works were situated at the clay pit being used and rectangular intermittent kilns can be made out at Scoularhall and Caledonian.

All of the works made tiles and Mr J Blake (Ex-director TB Gibson & Co Ltd0 made notes referring to the ‘drainers’ made at Castlehill.

Thornice Bank and Braidwood are the first works to be entered in Slaters Directories (in 1860).

George Morton operated the former whilst Thomas Hamilton operated the works at Braidwood. By 1867 he was making a wide range of products and had several works in Lanarkshire – at Auchengray, Pool, Carmichael and Corehouse (see notes and advertisement from Slaters Directory 1867). He made agricultural drain tiles from 1 1/2 ” to 12″ in diameter.

James Allan operated the Caledonian Works and made bricks drain tiles and firebricks and fireclay goods. Mr Blake noted that Allan at Braidwood made hollow blocks too.

Although the figures from the Directories are not accurate in that they show 2 brick and tile makers in Carluke in 1869 whereas there were 6 works shown on the OS map 1858 – 59, they nevertheless indicate a rise in the number of works operating in the late 19th century. This was partly a result of the discovery in the 1890s of large deposits of ‘Staffordshire blue clays’, which led to the erection of the Nellfield (c 1892 – post-1915), Lee ( c 1892 – pre-1907) and Cleghorn ( 1895 – post-1911) works. These works specialised in the production of red and blue engineering and facing bricks. This aspect of the industry was rather unusual in Scotland, although blue bricks were produced by Mark Hurll at Garscube and Knightswood and by Dixon Fireclay Co, Cleland and red engineering and facing bricks were also made in the Borders area. However, Carluke area was unique in having such clay deposits and having 3 works specialising in these products. An article appears in the British Clayworker, Nov 1894 on ‘Staffordshire brickmaking in Scotland’. Mark Hurll transported raw material from Carluke, and the Lee Terracotta Works were erected by John Ferguson and John Agnew who also operated the Omoa Fireclay Co.  Nellfield Brick Co. were the first to develop this material and continued to operate until after 1915. A fine example of the Nellfield brick can still be seen in the form of the Loudonhill Viaduct at Galston in Ayrshire.

The facade of the Windsor Cinema in Carluke was made of bricks which lined the kilns at Cleghorn. Once such block was found to bear the mark ‘ Bonnybridge Silica & Fire Clay Co Ltd’

(Christine Warren, Canada writes – The article on Carluke says that the bricks from the kilns at Cleghorn were used by Micky Burns to build his iconic Windsor Cinema. About 30 years ago, I interviewed Gerry Burns, one of his sons involved in the building work, and he told me that his brother, Victor, drove a lorry to the old brickworks near Canderside Toll (Birkenshaw) to get the kiln bricks, not Cleghorn.).

Little remains of these 3 works although there are some foundations at the site of the Cleghorn Works. Bricks at the machine foundations were marked ‘McDonald Braidwood’.

There were 4 works at Braidwood in the 1890’s – Lee, Nellfield, Hamiltons Tileworks and the Meadow Brickworks (c 1889 – 1915/20) which were operated by John McDonald and which made composition and fire bricks.

By at least  1886 there were also 3 engineering works in Carluke area which made brick and tile making machinery.

Below – Robert B Dick, Millwright and Engineer, Kirkton Street, Carluke made machinery for grain threshing and sawmills, tile machinery and miners boring machines.

Below – John Hamilton, Braidwood Engineering Works made all kinds of machinery for collieries, brickworks, sawmills etc.

The history of these firms has not been dealt with, merely their existence being noted.

Like many similar concerns, the Coltness Iron Company entered the brickmaking business not only to provide bricks for its own purposes, but also for an ever-widening circle of buyers. The company started making ‘bing’ bricks at Hallcraig Works in Carluke about 1880. (Carvel pages 3 and 157).

The bricks were made from part clay and part blaes leftover from earlier mineral workings. (TSA Ph of Carluke pgs 509 and 510). Hallcraig supplied 8,000,000 bricks for work in connection with the construction of the Caledonian Railway Line through Glasgow(TSA as above, from Carvel “Coltness Iron Company”) There were 2 continuous kilns at Hallcraig, which operated from the 1880’s – 1947. In 1899 Coltness Company owned about 186 acres of surface and minerals at Hallcraig and about 187 acres of mineral area at Mayfield, both mineral areas being chiefly clay band ironstone ( Carvel p 73)

The Hallcraig Works were replaced in 1947 by the new works at Mayfield ( c 1947 – ) which were operated by Coltness Iron Company until the formation of the Caledonian Brick Company which the Scottish Brick Company acquired in 1978.

Bricks were marked Coltness and after 1978 – SBC. Mayfield is one of the few SBC works still operating in 1982, the year this was written. The works were unusual in that they were the only SBC works to use oil for firing the 2 kilns, which were 28 chambered Hoffman types. Bradley and Craven’s machinery was used and it is possible that at one-time wire-cut extruded bricks were made there.

Both works formerly used hand barrows to transport the bricks from the kiln but at the time of the SIAS survey conveyor systems were in use. Bradley and Craven machinery had been used but was being replaced by Mitchell machinery at Birkfield.

The predominance of drain tile manufacture was the most significant aspect of the industry within Carluke which is illustrated by the fact that 2 of the works were amongst the last operating drain tile works in Scotland and in the mid 1960’s tile making machinery was still being made by the Hugh Martin & Sons(Carluke) at Whiteshaw Engineering Works.

Hallcraig Brick and Tile Works ( 1886 – 1915 Andrew Gold & Co) and Whiteshaw Tileworks ( c 1889 – 1915 /20 – TB Gibson & Co) were situated next to each other and again both had the typical features of long drying sheds, the clay pits on the sites and rectangular intermittent kilns. The drying sheds at Whiteshaw were open-sided. They were 4 kilns at Hallcraig and 3 at Whiteshaw. A mineral railway ran past both works.

Nothing remains of these works which were superseded by Carluke Tileworks ( formerly Waterlands) and Milton Brick and Tile Works respectively. However, the account books for Whiteshaw Works are held at the history department of Strathclyde University.

There were typical wooden and brick drying sheds with louvred sides and 5 kilns consisting of 1 beehive (built 1926 SIAS drawing), 2 rectangular down draughts (SIAS drawing) all of which were coal-fired. The small updraught kiln was used for firing flower pots, which were made at the works from the mid-1920s. The updraught kilns were thought to be the original kilns built c1904 – 1904. Hollow building blocks were made both at Carluke and Milton – a product which was made mainly in those areas where common clay was found. For example, the other main centre for these products was in Aberdeenshire where drain tiles are still being made (1982). The hollow blocks were made from clay and granulated polystyrene which burnt out, leaving the clay very porous. Flower pots were also made at several Aberdeenshire Works.

The flower pot moulding shop at Carluke was also unusual in that it was built from hollow blocks with cement cladding. Several product samples were collected from the site, as well as a 3 pronged wooden fork which was used for transferring green tiles from the machine to the drying shelves.

Both Carluke and Milton Works are interesting sites as they illustrate changes in layout and production and are also good examples of works operating in the 1930s and 1940s. Latterly both had the same directors – Messrs Gibson, Blake, Muir and Martin.

Carluke Works have been listed/scheduled or are recommended for such.

Milton ( c 1897 – 1980) had only one continuous kiln in 1897, which suggests that it may have originally concentrated on bricks (bricks were marked Milton, Carluke). By 1912 there were 3 Scotch kilns, which were replaced in 1941 – 42 by a Gibbons Mennier Tunnel Kiln. This was the only works in Scotland where a tunnel kiln was built specifically for firing drain tiles and hollow blocks. Latterly only drain tiles were made and in 1980 the works were closed maintained. This site is a good example of the output and performance of Scotch kilns in the 1930s and 1940s as well as a tunnel kiln for such products. The tunnel kiln was originally fired from the top by coal dust but was latterly fired by diesel oil. The bricks for construction of it were made by John G Stein. Mechanical feeders were provided by Gibbons Bros. Some of the machinery was by Fawcett but the de-airer / extruder was by Rawdon Ltd.

A variety of products were therefore made in the Carluke area and remains exist which are important to the history of the brick and tile industry of the country as a whole. but at present (May 1982) only the 2 common brickworks, Mayfield and Birkfield are operating. The latter employed 22 men in 1979 which was a fairly average number for the size of the works. Mayfield employed 68 in 1979 but by November 1980 the works were on short time and 1 kiln was off. The works were re-visited in March 1981 when there was still only 1 kiln in production. Bricks were then being sold in packs as elsewhere in Scotland.

There were no entries in Pigot’s Directory for 1837