Carstairs Junction Tileworks, Carstairs, South Lanarkshire. (Note – SBH – I am uncertain as to the exact name of these works. Many brickworks in the area were owned by Thomas Hamilton).

Below – 1858 – Carstairs Junction Tileworks. These works are not detailed on the 1896 map. 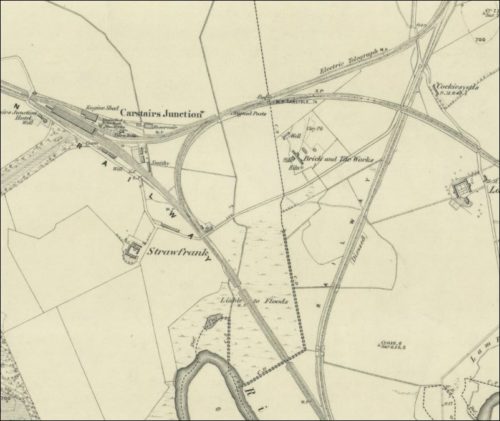 1858 – 1861 – ScotlandsPlaces – Carstaits Tileworks. This tileworks which supplies the adjacent country with tiles for draining purposes was erected by Henry Monteith Esq the Stat[istical] Acc[oun]t says with reference to it that “the clay in the N[orth] W[est] of the Mouse is of a very fine quality which circumstance induced the proprietor to erect a tilework where tiles for draining are now made to a great extent” it is the property of Robert Monteith Esq.

04/03/1864 – The Scotsman – Jury trial before Lord MacKenzie. Hamilton v Simpson. In this case, which commenced before Lord MacKenzie and a jury on Wednesday and concluded yesterday, the pursuer was Mr Thomas Hamilton, brick and tile manufacturer, Carstairs and residing at Park House there, in the County of Lanark and the defender was Mr A G Simpson, coalmaster, Wishaw near Motherwell and residing at Muirhouse in the county of Lanark. The issue which was sent to the jury was as follows:- It being admitted that in or about November 1862 the defender removed from Waterlands, in the Parish of Carluke and County of Lanark on the Caledonian Railway, the through crossing and the points referred to in the missive letters, No 15 of process, which connected the siding formerly there with the mainline of the railway. Whether the defender in breach of his obligation has failed to replace and relay the same to the loss, injury and damage of the pursuer. Damages laid at £500. The jury after an absence of an hour and a half returned a verdict for the defender.