1854 and 1855 –  Invoices – Thomas Hamilton, tile manufacturer, Overton near Kirknewton. Works – Auchengray by Carnwath and Newbigging by Broxburn and Hallcraig by Carluke and Nellfield by Carluke. The reference to Overton, Kirknewton may be Mr Hamiltons residence and office?

19/09/1891 – Lanarkshire Upper Ward Examiner – The telephone at collieries – Coltness Iron Company are carrying through a connection by means of the telephone between their works at Coltness and their brickworks at Hallcraig. Poles have been erected along the old road between Carluke and Wishaw and branching off at a point to go through the lands of the general scheme by which the Coltness Iron Company are making their connection by means of the telephone with their principle pits and works throughout Lanarkshire. 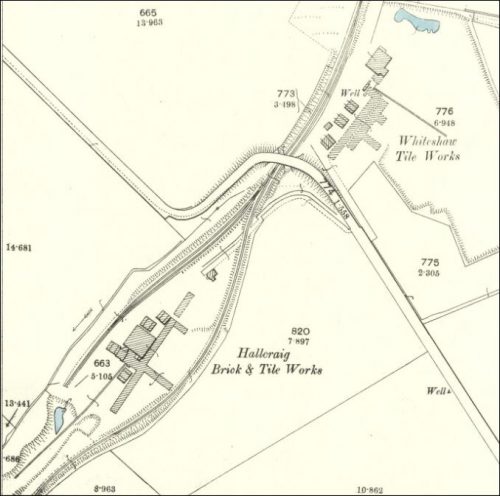 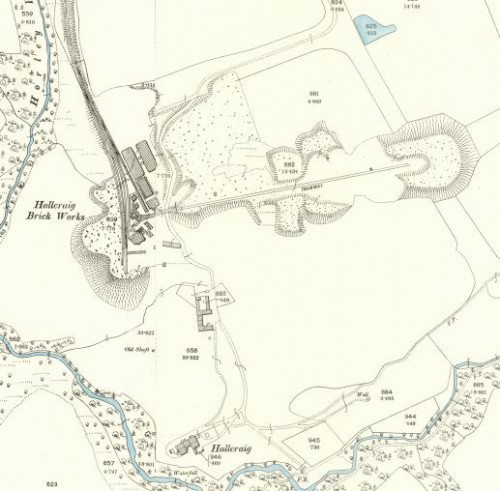 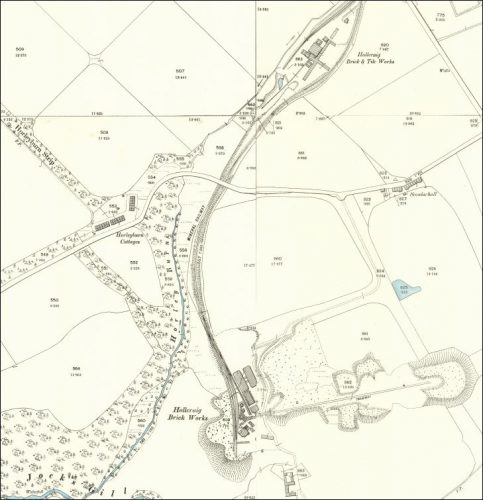 Below – 12/07/1899 – Daily Telegraph and Courier – Coltness Iron Company Limited prospectus. The three brickworks of the company are in efficient condition and are situated at Newmains and Hallcraig, in Lanarkshire – both being the absolute property of the company – and Jordanhill, Glasgow. The manufacture of enamelled fireclay goods is carried at Newmains, and that of building bricks at Hallcraig and Jordanhill, the capacity of the two latter being about twenty millions of bricks per annum. The properties absolutely owned by the company, including the above-mentioned purchase, are as follows (1) At Newmains, about 325 acres of mineral area, and 270 of surface area, upon which the blast furnaces, &c., are situated, and having abundance spare room for future extension. (2) Woodend, in Linlithgowshire, about 1,024 acres surface and minerals, upon which one of the company’s collieries. (3) At Hallcraig, in Lanarkshire, about 186 acres of surface and minerals, upon which is one of the company’s brickworks. The mineral in this property is chiefly clay band ironstone. (4) Mayfield and neighbourhood, in Lanarkshire, about 187 acres of the mineral area —chiefly clay band ironstone and limestone.

Red composition drain pipes, 3 feet lengths and 6″ to 24″ in diameter.

06/05/1905 – Hamilton Herald – Courts … Two tramps were charged with sleeping at Hallcraig Brickworks belonging to The Coltness Iron Company. It was stated by the Fiscal that the objection taken to these tramps sleeping in the Works was that they made beds from the bricks and they did not put them back in the morning which caused considerable annoyance to the workmen who had to put them back in their place. The Sheriff dismissed them with a warning.

23/10/1925 – Carluke and Lanark Gazette – Carlukes new houses. The minute of the Public Health meeting of 21st September bore that a letter was read from Messrs Bryce & Symington, contractors for the brick work of the 84 houses to be built at Carluke, stating that they were now prepared to build these houses with Hallcraig composition bricks at the same contract price as their tender accepted for the building of the houses with Shotts slag bricks and the Committee agreed to the amendment of the contract with Messrs Bryce & Symington to allow of the substitution of Hallcraig bricks. The Committee thereafter reconsidered the contracts for the 16 houses at Law, 16 houses at Carnwath and 4 houses of three apartments at Carstairs. in each of which it had been agreed to build with Shotts brick on account of the saving of cost as compared with composition bricks. The Clerk reported that the contractors for the houses at Law were not prepared to reduce the amount of his offer for building with composition brick; that the contractors for the houses at Carnwath had already entered into a contract with the Shotts Iron Coy., for the delivery of their bricks on the job, and that the Shotts bricks for the four houses at Casatairs were already on the site and the work well advanced. In view of these circumstances, and having regard to the fact that, if any of these contracts were increased by preferring composition bricks, the price per house authorised by the Scottish Board of Health for the whole scheme would he exceeded the Committee resolved to abide by the tenders as accepted.

15/03/1929 – Motherwell Times – A Newarthill native’s death. There was laid to rest in Shotts Cemetery on Thursday last week the remains of Mr Richard Gibb, late manager Hallcraig Brickworks, and who, we have reason to believe, was Scotland’s oldest bricklayer. Mr Gibb who was in his 80th year, was a native of Newharthill, Parish of Shotts. As a boy, he. commenced work in Auchinlea Brickworks, Cleland, and saw the process of brickmaking develop from the handmade brick to the elaborate machinery of today. From Auchinlea, Mr Gibb went to Paisley and later he was at Bargeddie. In 1891 he came to be the manager at Hallcraig Brickworks, a position he held until about three years ago. Two years ago he came to reside in Carnwath Road, where he died on Monday. Mr Gibb was a man of fine physical stature and possessed outstanding intellectual abilities. Broad in his outlook he was a keen student of social affairs, took a deep interest in the Co-operative movement and had good knowledge of Company Law.  He was much liked for his genial manner. Mr Gibb was predeceased by his wife about thirteen years ago and is survived by a family of two sons and four daughters. Deep sympathy is extended to the bereaved family.

1934 – Wishaw Press – Coltness Iron Company year-end report 31/12/1933 … Hallcraig and Giffnock Brickworks have been on full production throughout the year. Additional kilns have been erected at Giffnock. Newmains Brickwork, producing sanitary fireclay goods has only been partly employed. 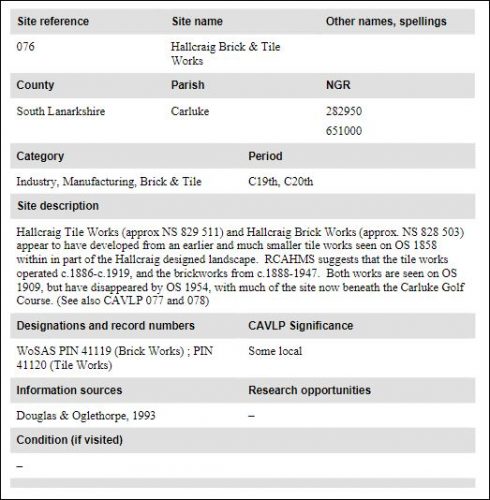