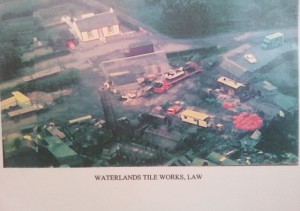 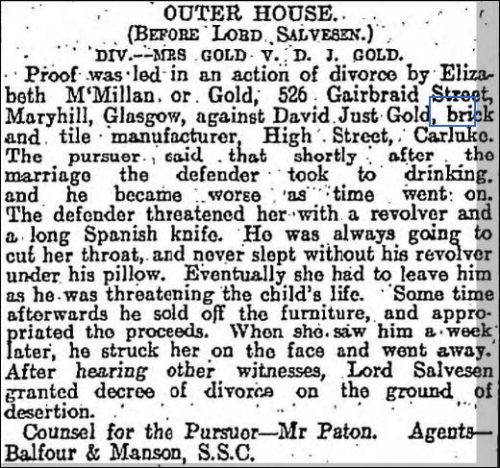 21/09/1920 – Gold and Company Limited  (in liquidation). Notice is hereby given, in terms of Section 195 of the Companies (Consolidation) Act, 1908, that a general meeting of Gold & Company Limited, Carluke Tilework, Law Junction, in liquidation, will be held in the office of the liquidator, 2 Candleriggs, Alloa, on Saturday, 23rd October 1920, at 10 a.m., for the purpose of receiving an account showing how the winding-up has been conducted, and the property of the company disposed of, and giving any explanations thereof; and also determining, by resolution, the manner in which the books, accounts, and documents of the company shall be disposed of.  J. Reed, Liquidator. Alloa, 21st September 1920.

Below  – 1954  – Waterlands Tile Works. The blue cross marks the position of the Law Junction Tileworks and the Carluke Tileworks aka Waterlands are underlined by 2 blue lines. 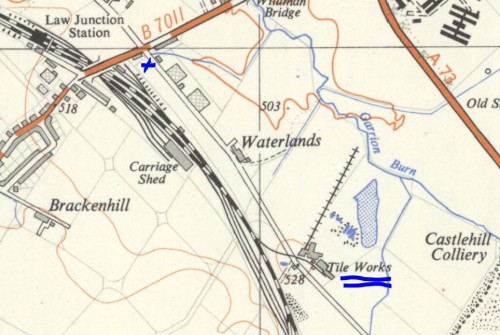 04/02/1975 – An entry in the Edinburgh gazette making reference to a change of directorship for Gold & Co (1920) Ltd, Carluke Tileworks, Law Junction.

The following entries are recorded by the Carluke Parish Historical Society as being extracts from ‘James Blake’s’ notebooks….they reference Mr Gold and Waterlands.

Tileworks and Clay and Clayfields

From an advert in Glasgow Herald – John Miller, Woodhead, Bothwell – clay over 80ft which J Loudon did not appear to think much of his field.

J Loudon also looked at a field on John Watson’s (coalmaster)  ground at Neilston – this field was thoroughly pitted by United Collieries.

Started about 1860. Andrew Gold along with Loudon and Russell at a site near Low Crossing.

Gibson took adjoining clay field and Gold had later to move across the road to Law Village.

He took Waterlands clay field about 1904 and commenced making bricks about 1906.

Old Company assets were bought by Brown for £3200 and handed over to new Company.

Sump and pump put in during coal strike of 1926. 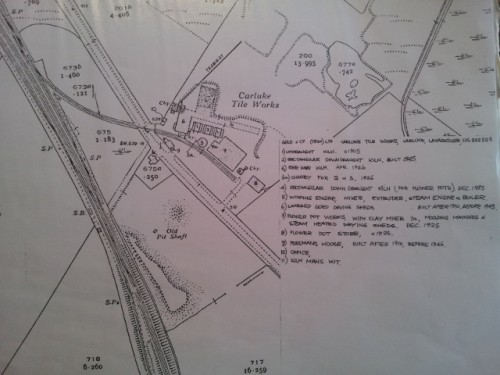 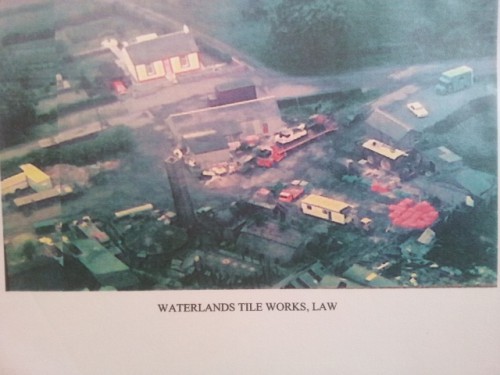 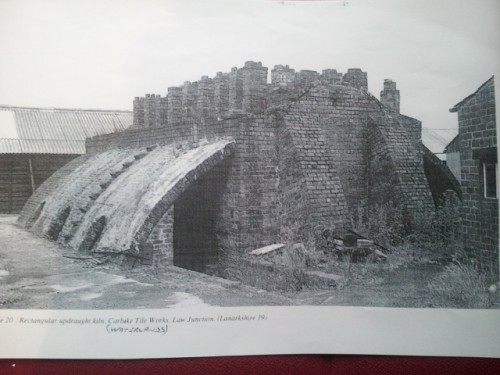 Below  – Sketch of the updraught kiln, Carluke Tileworks, Law Junction, Carluke  – RCAHMS. Measured and drawn by Graham Douglas in 1978. 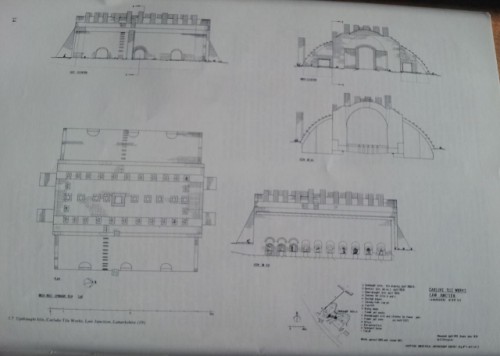 Below  –  2016 – These photographs were taken at the Carluke Tileworks.

Below  – A chimney pot in the garden of the manager’s old house -the present owner states this was made at the works. It is not marked. 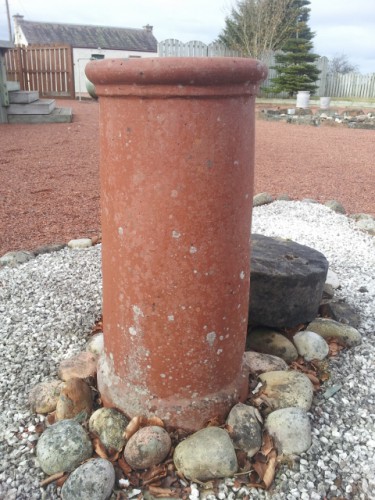 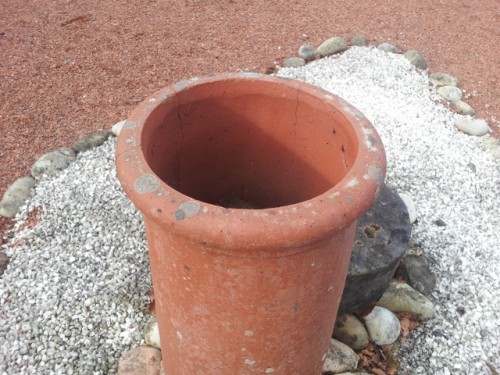 Below – A sandstone wheel measuring 20″ diam with the square central hole being 4″ x 4″. The current owner states it used to have a wood shaft and was turned by a thick rubber belt. 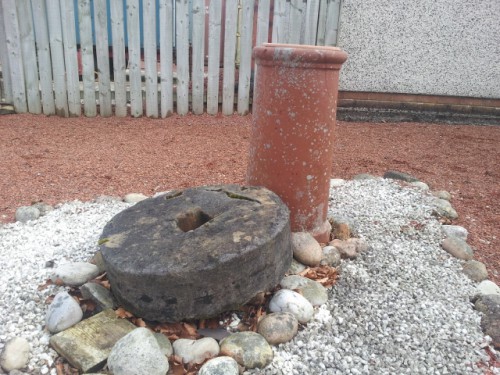 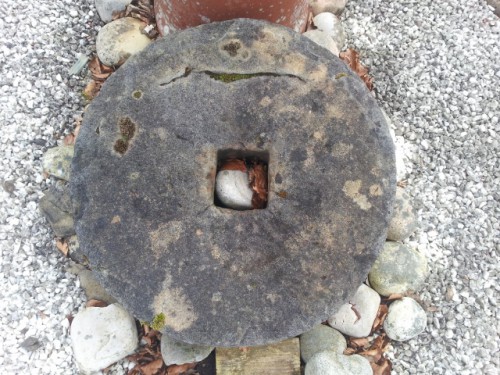 Below – A sandstone marked that originally stood on the road at the entrance to the works. 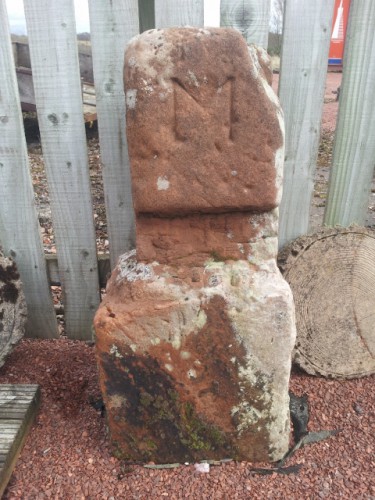 Below – Former offices of the Carluke Tileworks. 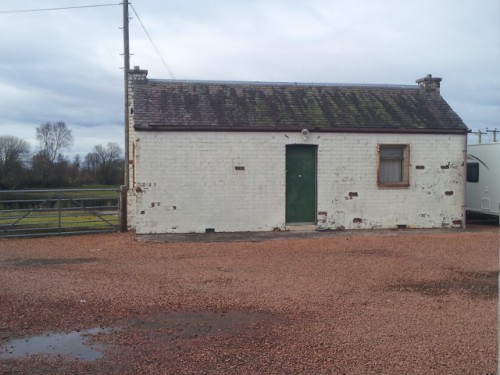 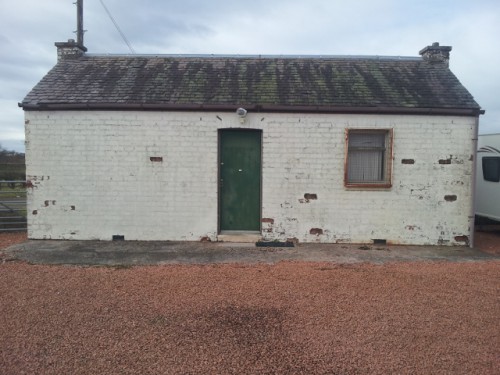 Below  – This brick building was apparently a wash and shower house for use by the works employees. To the right of it is a retaining wall supported by buttresses. 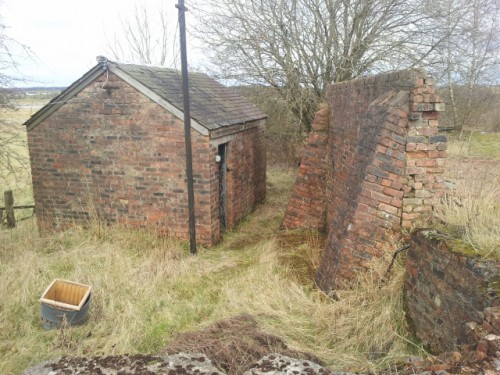 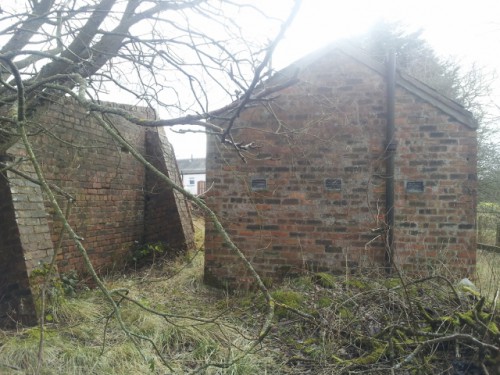 Below – The interior of the wash house. 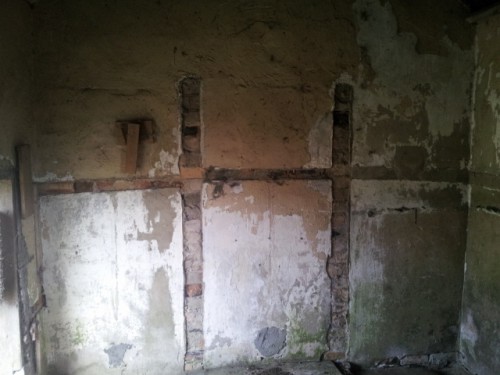 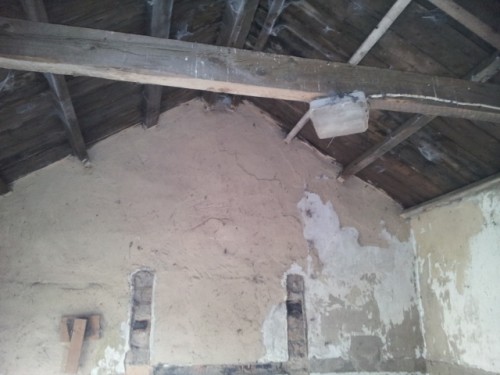 Below –  – This iron housing was situated just below the wash house and in a shallow pit. It would not open but may well house a water pump or similar. 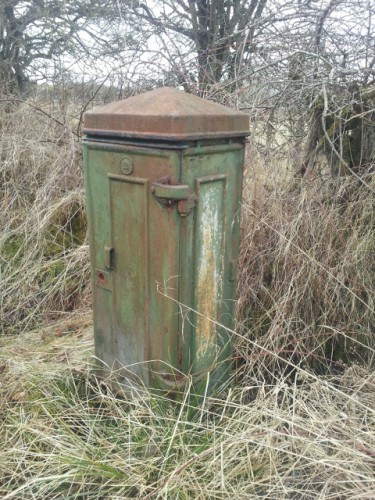 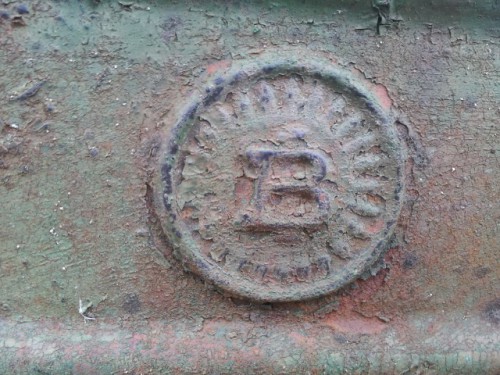 Below – A pile of hollow blocks which likely formed the walls of the buildings on site. They appear to be of the same general type thought to be manufactured by the Scottish Clay Hollow Ware Company at Milton, Carluke 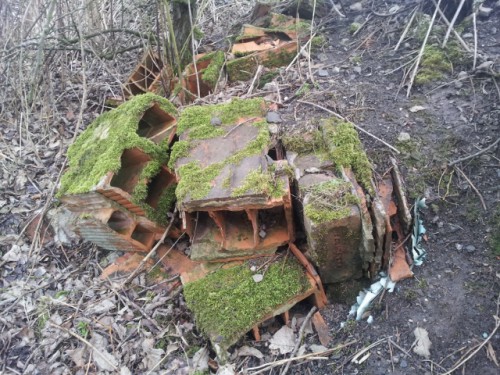 Below – 2 drainage tiles and a cored brick, all found on-site and highly likely to have been manufactured there. Both are probably misfires and ended up on the rubbish pile. Note the ‘bubonic plague’ look of the tiles. The tiles measure 13″ long by 2″ flat base and 3″ diam. 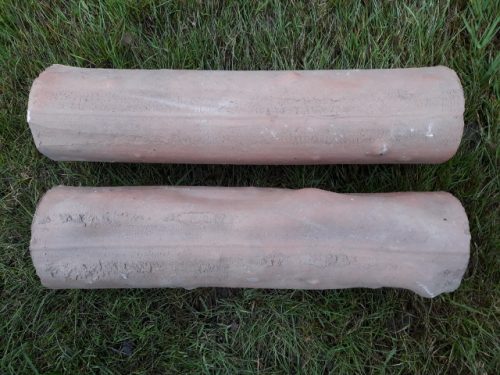 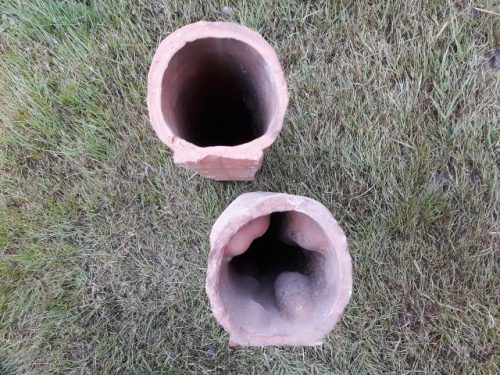 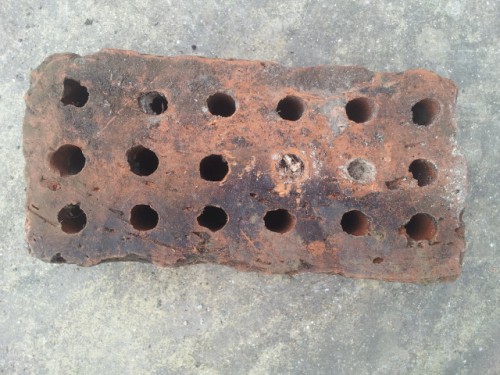 Below – Also found on site. It could be the top of a clay rhubarb forcer or similar although these normally had a little knob on the top to assist with removal. 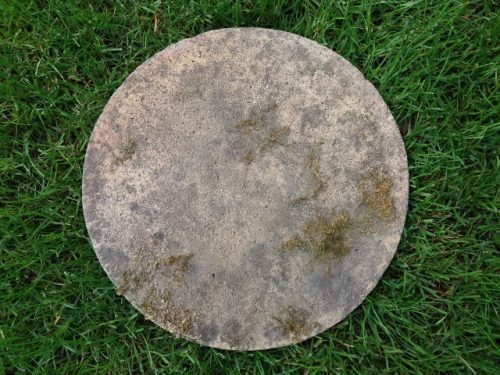 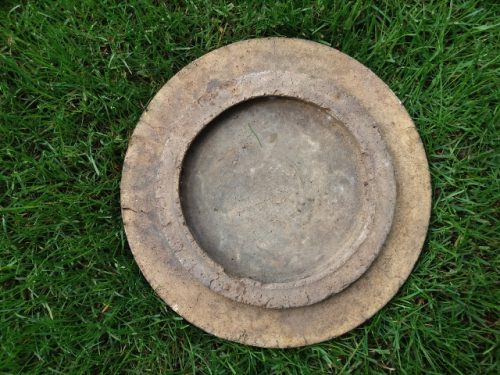 The Company traded under the name of Gold & Co. 1920  the Carluke Tileworks were known locally as the Waterlands Tileworks.

The works were opened in 1905 and closed in 1975. In spring 1978, the general condition of the works was rather poor. Parts of the main drying shed roof were off and much of the timber used for the sheds had been cut up for firewood. All machinery apart from some portable extruder’s and dies, several cutting off tables, electrically driven pug mill in the lower flower pot section and flower pot making machinery, are still in place.

The machinery for making flower pots in the 1930s and replaced in 1939 was 3 potters wheels. In 1939 the potter’s wheels were replaced by an inside stucco mould which was again replaced by a steel cap and die machine. The pot section had steam-heated drying cupboards. The pot section closed in 1965.

The winch for bringing the tubs up from the clay pit was removed in 1969. (This was a main (mane) and tail haulage system installed in the 1940’s)  The clay then came from the Milton Tile Works at Carluke, by road.

The extruder’s date from about the 1920s, electrically driven and could be moved about the drying sheds so that transporting the green tiles was cut to a minimum.

The pug mill in the flower pot section, originally line shaft driven from a stream engine but later fitted with an electric motor, originally had a wooden barrel. This, however, wore out and was replaced with a welded steel fabrication in the 1960s. The new barrel was made at a nearby engineering works but it also suffered from the same problem as the original. – the clay quickly wore out the bearing in the end cap and the rotary knives soon wore through the barrel.

The preparation of the clay was reasonably straight forward. It was mixed with a little water and originally shell or lump lime latterly hydrated lime, in a pug mill and then extruded into large blocks which were then taken to the portable extruders.

In all 20 were employed at the works. 7 in kiln work and the rest making tiles, The first job young lads had at the tile works was taking blocks of clay from the mill to the portable extruders. Their next move would be to placing tiles on the shelves and finally onto kiln work.

Downdraught kiln – This was the largest kiln. It was built in 1945 and used 8 tons of washed singles per cycle, 72 to 84 hours and was loaded with approx 12,000 mixed sizes of tiles. Chamber size was 3.6m wide and 9m long. 12 fireboxes. It was built with bricks and braced with steel section and used the same chimney as the beehive kiln.

Up draught kilns(2) – used about 12 – 14 tons of washed singles per cycle and again about 72 to 84 hours per cycle. 15,000 mixed sizes could be fired … All brick built. The temperature of the kiln was usually judged by the colour of the tiles in it – also in updraught kilns, the required temperature had been reached when the hairs on the back of the hand were singed by waving it over the open flue!

Tiles took between 1 and 3 weeks to dry depending on the weather and some parts of the shed were much better than others.

It is generally said that the tiles shrink 1/8″ for every 1″ of their length while drying out and up to 1/2″ max. (for the largest sizes while being fired. 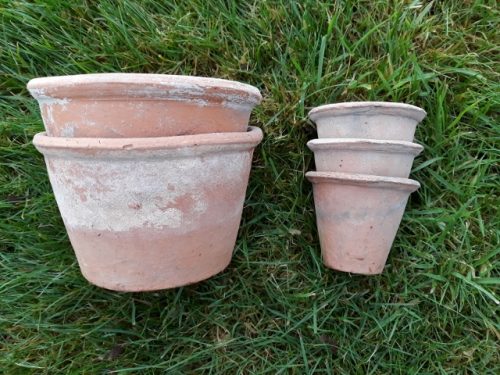 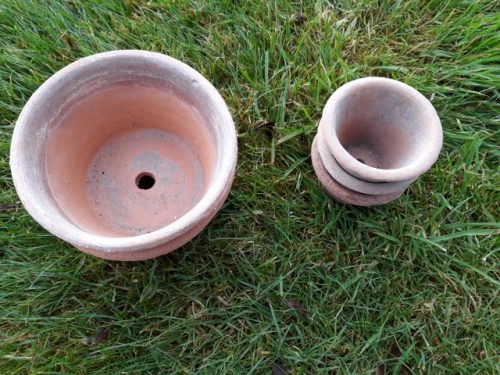 Thank you to the  Carluke Parish Historical Society for their valuable information.