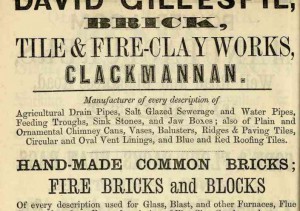 08/01/1852 – Falkirk Herald – Brick and Tile Work at Clackmannan – To be Let, for such period as may be agreed upon, with entry at Candlemas next. Previous tenant James Raynes Wilson. That well-known clay field on the Lands of Grassmainston, in the Parish of Clackmannan, at present possessed by the Clackmannan Brick and Tile Company. The incoming tenant will have such of the buildings as he may require for the works, and also the branch railway connected with the railway which leads to the private shipping place at Clackmannan shore, on paying for the materials. The clay is of very superior quality, great thickness, and capable of being manufactured into every description of drain pipes, collars, tiles and bricks,&c. The works, being situated within two minutes’ walk of the Stirling and Dunfermline Railway Station at Clackmannan, and having besides a private railway communication to the shipping place at Clackmannan, a great facility is afforded for the transport of the articles manufactured. A very extensive trade, now ell established, has been carried on for the last 18 years in manufactures both from the common clay and from fire-clay, of which an abundant supply of first-rate quality is wrought immediately adjoining the works. The current lease granted to the late Mr James Raynes Wilson expires at the ensuing term of Candlemas, and it is proper to state for the information of intending offerers that the Proprietor has found it necessary to take a decree before the Sheriff of the County, for having the heirs of the late tenant formally removed at that term.  The conditions of the lease will be seen on application to Mr H. G. Dickson, W.S., 3, Dundas Street, Edinburgh; or to Mr Law, at Kerse, near Grangemouth, and offers will be received by Mr Law, until Wednesday the 14th of January. The works will be pointed out by James Anderson, the forrester, at Birkhill Lodge, near Clackmannan. (From this advert – 03/12/1851 – North British Agriculturist, it appears the works came onto the market on 27/11/1851).

26/08/1858 – Fife Herald – Clackmannan Brick and Tile and Fire Clay Works – Mr Gillespie, Proprietor of the above Works, begs to intimate to Architects, Agriculturists, &c., that he has arranged with Mr John Scott, Shipmaster, Crail, Fife, to act as Agent for the sale of the manufactures of the above works.  Mr Scott will always have on hand at Crail, supplies of blue or red roofing tiles, chimney cans, common and fire bricks, cattle troughs,&c., and samples of all the drain pipes as manufactured here, and will be happy to arrange with agriculturists for the delivery of cargoes of drain pipes at any harbour on the cast.  Prices and freight learned on application to Mr Scott. Brick and Tile and Fire-Clay Works, Clackmannan, August 25, 1858 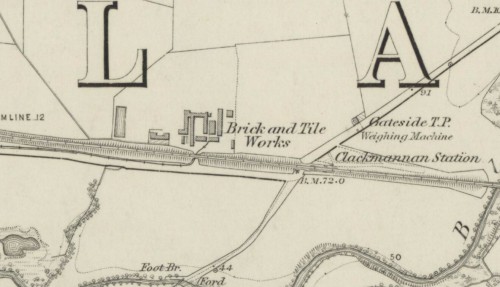 16/04/1864 – Dunfermline Saturday Press – Fatal accident – On Monday forenoon a lad aged 17, named George Dunn, son of James Dunn, Blacksmith, Clackmannan was employed at the brickwork there wheeling bricks to the kiln. A horse and cart belonging to the work were standing across the path when he attempted to pass with his barrow, under the horse’s belly. The animal got frightened and ran off, trampling upon the poor lad so severely about the breast and abdomen that he died immediately afterwards.

18/06/1864 – Alloa Advertiser – EntertainmentMr John Sharp. On the evening of Wednesday last, a party, numbering upwards of thirty, sat down to supper in Love’s Commercial Inn on the occasion of presenting Mr John Sharp, manager of the brick and tile works, with a handsome silver snuff box and also an excellent writing desk. Mr John Stein discharged the duties of the chair, while Mr Adam Cooper, who had been thirty years connected with the work and had seen many changes, officiated as croupier. After doing ample justice to an excellent supper, the Chairman gave the usual loyal and patriotic toasts. In giving the toast of the evening, the Chairman dwelt at some length on the excellent character of Mr Sharp, not only as manager of Mr Gillespie’s brick and tile work, but also as a private gentleman. Mr Sharp had now been twelve years connected with the work, and the assembly around that table, as well as the substantial presents made to him that evening, showed how highly he was respected by those over whom as manager he had the oversight. The Chairman then presented the guest of the evening with the snuff box and writing desk, each bearing an inscription that it was presented to him by the workmen at Clackmannan Brick and Tile Work, and also a few friends as a token of respect and esteem. The articles, he said, with which they were highly pleased, were both selected from the stock of Mr Strang, jeweller, Alloa. The toast of Mr Sharp’s health was then received with great applause. In reply, Mr Sharp returned his grateful thanks for the valuable gifts that night handed to him. These articles were of much intrinsic worth, but he valued them highly coming from the quarter they did. In any circumstances of life in which he might be placed, he could point to these articles as a testimonial to character. As manager of the Clackmannan Brick and Tile Work he had endeavoured to do his duty both to employer and employed, and so long as he was honoured to retain his present position, it would be his endeavour ever to act fairly between the two parties. Again he thanked the subscribers most heartily for their great kindness on this occasion. Mr Sharp’s excellent speech was much applauded. Other toasts followed – Mr Bruce of Kennet, Vice-Lieutenant of the County; the health of Mr and Mrs Gillespie; The Press; The subscribers to the Testimonial; The workmen of the Clackmannan Brick and Tile Work; The Chairman;  The Croupier;  Mr Robert Sharp and Mr Alex. Cuthbert, who collected the subscriptions; The Landlord, &c. In the course of the evening, a great many songs were sung, as may be seen from the names of those who entertained the company with their musical powers – Messrs Alex. Kirk, George Dunn, Michael Chrystal, William Bain, Daniel McVie, John McNab, Duncan Ferguson, Thomas Wilson, &c. The entertainment was a very successful one, creditable the excellent body of workmen at Clackmannan Brick and Tile Work, and honouring to the respected manager of that important work. 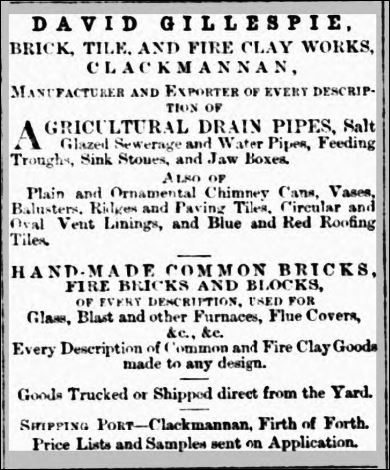 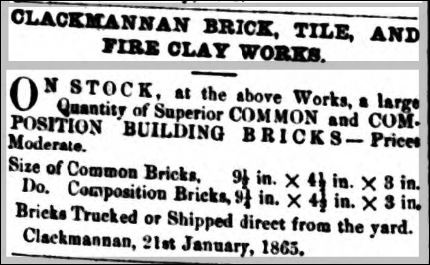 11/04/1865 – Orcadian – David Gillespie, Brick Tile and Fire Clay Works, Clackmannan. Manufacturers and exporters of every description of agricultural drain pipes, salt-glazed sewerage and water pipes, feeding troughs and jaw boxes. Also, plain and ornamental chimney cans, vases, balusters, ridges and paving tiles, circular and oval vent linings and blue and red roofing tiles. Handmade common bricks, fire bricks and blocks of every description used for glass, blast and other furnaces, flue covers &c. Every description of common and fire clay goods made to any design. Goods are trucked or shipped directly from the yard. Shipping port – Clackmannan, Firth of Forth. Price lists and samples sent out on application. 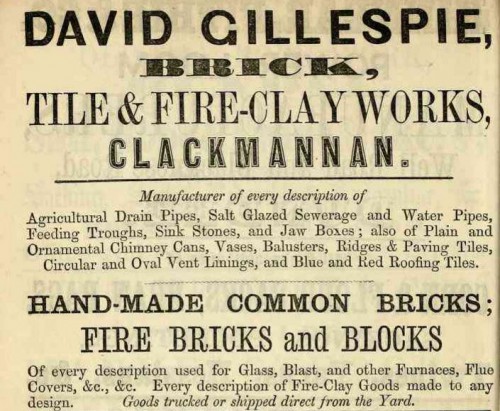 06/03/1869 – Alloa Advertiser – To Joiners etc – Offers wanted for providing wood, iron and the erecting of a footbridge over the Black Devon near Riccarton, Clackmannan. Particulars may be had by applying to Mr John Sharp, brick and tile works, Clackmannan.

15/09/1871 – Edinburgh Gazette – John Sharp, Clerk, residing at Clackmannan Brick and Tile Works, near Clackmannan, has presented a Petition to the Sheriff of the Sheriftdom of Linlithgow,
Clackmannan, and Kinross, for Interim Protection and Decreet of Cessio Bonorum; and all his Creditors are hereby required to appear within the Sheriff-Court-house at Alloa, on the 17th day of October next, at 12 o’clock noon, when he will appear for Examination. J. Gregory Wallace, Petitioner’s Agent. Alloa, September 12, 1871.

09/11/1871 – Fife Herald – Clackmannan Brick and Tile Works – I, David Gillespie beg to intimate that John Sharp, late cashier and clerk here, has left my employment and is no longer authorised to receive orders or take payment of any accounts for the above works. Clackmannan 30/10/1871

Yours of the 1st has been forwarded to me from Cowden and in reply to your application I have no hesitation in saying that the concentration of the smoke outlets of the rectangular Brick and Tile kilns at Arniston into two dwarf chimneys was a decided improvement, both as regards to consumption of fuel and the diminution of smoke, and you need have no scruple in recommending or carrying out any alteration similar to what you did then, for the attainment of similar results.

I am in receipt of yours of the 21st ult.,  and consider the pan mill with perforated bottom delivering into the horizontal pugmill underneath.  Such as we fitted up at Arniston. a decided improvement on the ordinary pan mill, especially when composition bricks are made from shale and common clay; but it is equally well suited for fire-clay.  From the regularity of the mixture in the former description of bricks, a better article is produced, as no small stones can get through the bottom, which, in the ordinary mode of milling clay, causes considerable breakage after the bricks are burned.

Mr Henry Stirling, Brick Works, Clackmannan.
The above mill produces bricks twenty per cent better article than the old pan and pugmill, and not one broken in place of ten. Plans, &c., furnished, £10 for each.

22/11/1878 – Edinburgh Gazette – Intimation is hereby given that the Trustees of the Late David Gillespie, of the Clackmannan Brick and Tile Works, ceased to have any connection with or interest in these Works, as at 12th September last. All parties indebted to Mr Gillespie, or to his Trustees, are requested to make immediate payment to Mr James Gillespie, at the Works, or to Messrs. Dalgleish & Bell, W.S., 22 Coates Crescent, Edinburgh, the Agents of the Trustees. Dalgleish & Bell, W.S. 22 Coates Crescent, Edinburgh, 21st November 1878. 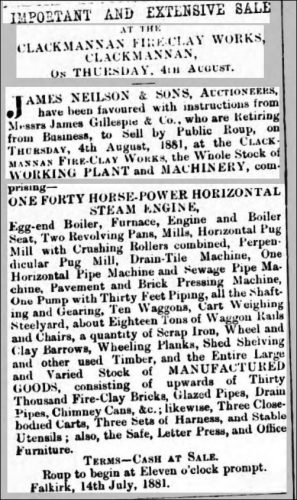 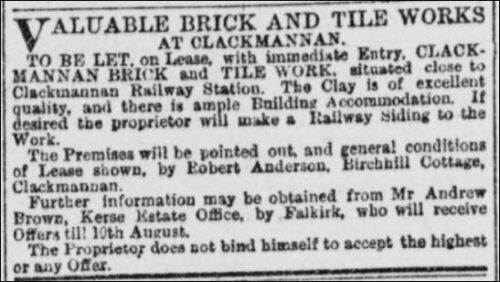