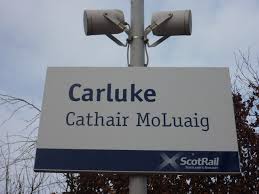 John McDonald operated the works which were situated on the opposite side of the road from Scott’s Tea Room.

McDonald bricks were used to build the machine foundations of the Terracotta Works at Cleghorn.

12/01/1889 – Accident at brickwork – Yesterday Robert Gray, aged 17, residing with his parents at Lanark Road, Braidwood, Carluke, met with a serious accident at Meadow Brickwork, Carluke, belonging to Mr John McDonald. He was employed in the brickwork to feed the clay mill. The mill was brought to a stand for want of steam, and the workers were ordered to go and work outside till the steam was got up. A short time afterwards the manager, supposing all had left the attendance at the mill, restarted it, when Gray (who for some reason had not left with the others) got his right arm entangled among tho machinery and it was cut off at the elbow. Dr Stewart, Carluke, was called, and attended to the injured lad, and shortly after he was conveyed to the Lanark Hospital. 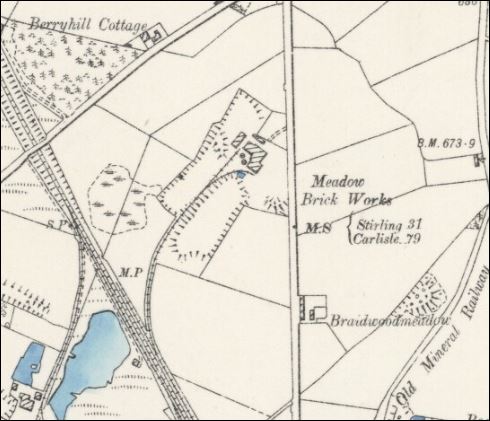 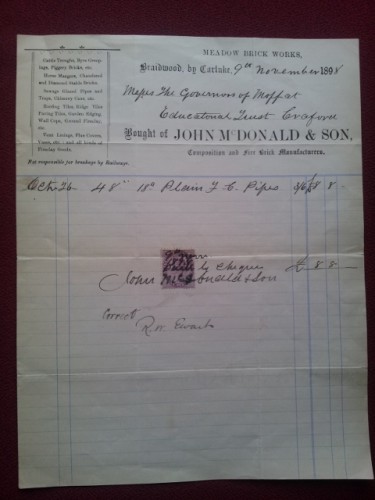 24/07/1909 – Carluke and Lanark Gazette – Article re a break into the offices of the Meadow Brickworks, Braidwood. Reference to Samuel Crawford, Mount Stewart Street, Carluke being the foreman and Charles McDonald being a senior partner in the firm owning the brickworks. 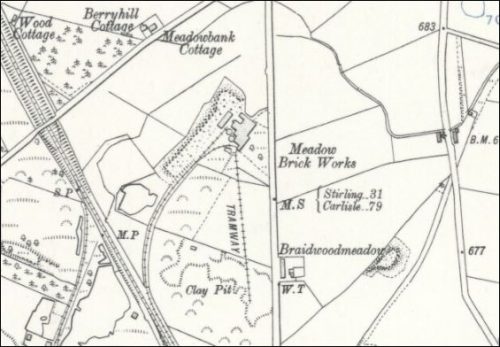 26/11/1920 – Carluke and Lanark Gazette – Brick making and house building. Captain Walter E. Elliot, M.C., M.P,  speaking in the House of Commons on Thursday last week in connection with Unemployment Relief Work … Within what might be called a comparatively recent period no less than, five brickworks in Lanark and Carluke districts have ceased work and not always for the want of raw material. Messrs Macdonald’s Brickwork at Braidwood was permitted to stop and later be dismantled with a wealth of brickmaking material at hand in the shape of the Mayfield Blaes Hill. The dismantling of Cleghorn Terra Brickworks with their great capacity for brick production is now fast coming to a finish. Instead of allowing this brick machinery to be reduced to scrap iron and the kilns to heaps of loose bricks, could not the Government have taken over these works and used them in connection with their housing schemes? The five brickworks referred to had alone a producing capacity of at least 150,000 bricks per day.

Early 1920’s – The 1985 publication ‘A survey of Scottish brickmarks’ suggests the works were demolished around this time.