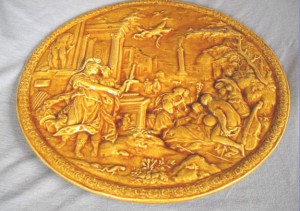 1981 – Falkirk Herald – John Gardner opened a brick and tile works on the site in 1845 however it failed to make a profit until 1860 when John’s son Peter took it over and began to produce pottery. (c.1866-1902). The pottery was in the estate of the Earl and Countess of Dunmore, the quality of the pottery was enhanced by clay bought from Devon and Cornwall in the 1860s, this was added to the “till” or clay found under the moss in Stirlingshire.  Mr Johnston took over the pottery from Peter Gardner when he retired, it did not return to the production of bricks.

Source  – Pottery was produced on the Estate of the Earl of Dunmore near Airth, in Stirlingshire, from the 1790s. At that time, it was a typical estate pottery, producing bricks and tiles for building repairs, and domestic pots for local use. All of its wares were made from the carse clay, dug on the estate, a process which unearthed 8000-year-old whalebones, deposited on the Carse of Stirling by a tsunami or giant tidal wave. The early wares were not particularly distinctive.

Production changed dramatically during the time of Peter Gardner (1835-1902), a third generation potter who took charge of the works on the death of his father in 1866. Peter Gardner imported china clays from Cornwall, and for over 30 years was constantly experimenting with shapes, glazes, and finishes, making his work much sought-after and highly collectable.

The Dowager Countess of Dunmore, and the seventh Earl and Countess of Dunmore helped to promote the work of the pottery through securing royal patronage. The Prince of Wales (later Edward VII) came to the Pottery during his visits to Dunmore, and Queen Victoria purchased some of the ware at the Edinburgh International Exhibition of 1886.

Peter Gardner used the Dunmore Estate as his inspiration for the many leaf and flower-shaped dishes and containers, as well as the puddocks, toads, owls and fish ornaments produced at the Pottery, much in the same way that the Massier family pottery at Vallauris drew its inspiration from the Cote d’Azur. Japanese and Chinese themes were also in evidence, and some of Gardner’s Arts and Crafts shapes are close to the work of his contemporary, Christopher Dresser at the Linthorpe Pottery.

Dunmore Pottery was never a mass production works. Indeed, although many pieces in the exhibition are similar, there are scarcely two which are identical, on account of the different effects obtained through the glazes. Reds, yellows, cobalt (mined in the Ochils) and mazarine blues were among the bright colours employed. Teapots were a speciality.

Dunmore Pottery – Peter Gardner represented the third generation of Gardners to pot at Dunmore Moss on the estate of the Earl of Dunmore in Stirlingshire, Scotland. He took over on his father’s death in 1866 and transformed the country pottery from a supplier of utility and domestic wares to a world famous source of ornamental wares.

Gardner was a keen experimenter and his glazes were what led to the strong and lasting appreciation of Dunmore Wares. Queen Victoria was a patron, and in 1876 over a hundred pieces were bought by Glasgow Museums and Art Gallery.

On Gardner’s death in 1902 the pottery was bought by Robert Henderson, who sold it, two years later, to an ex-employee of Dunmore Pottery, Thomas Harrison. Harrison died in 1912, and his wife managed it for a further few years. By 1917 the buildings had been sold, and they were never re-used as a pottery.

Kiln of Dunmore Pottery, Dunmore, Stirlingshire From the early 19th century, Dunmore Pottery made tiles and domestic ware using local clay from Dunmore Moss, and superior clay from Devon and Cornwall. The surviving remains date from after about 1860 when it was bought by Peter Gardner of Alloa. The brick built bottle kiln was just over 5 m in diameter at the base. In January 1974, it was badly damaged by a gale and subsequently demolished. Although Scottish potteries made some use of local clay, their sites were usually chosen for their nearness to a good supply of coal. It took about 15 tons of coal to fire one ton of pottery. 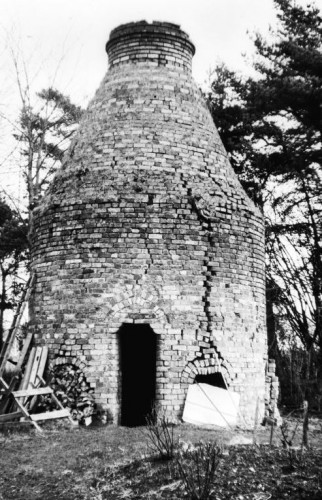 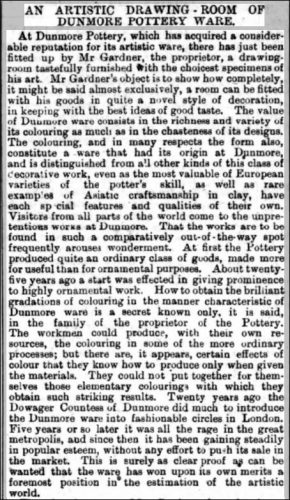 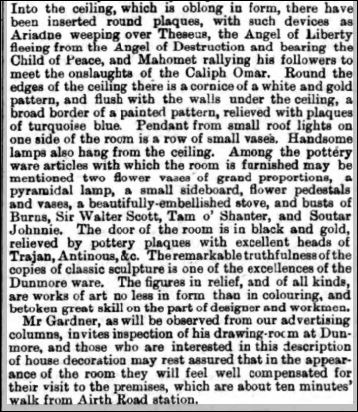 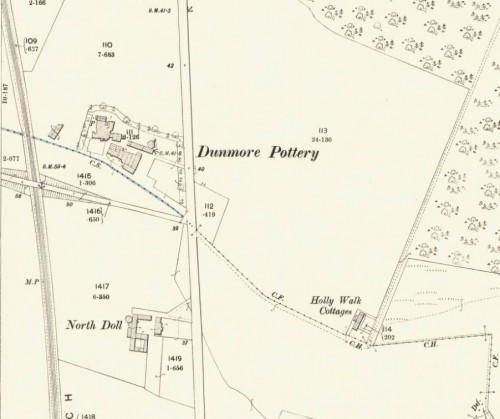