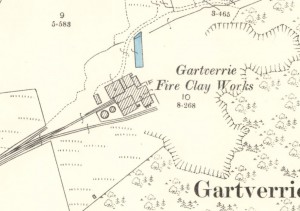 25/06/1856 – Glasgow Herald – Notice to creditors – Parties having a claim against or due to the Estate of the late Mr John MacDonald of Gartverie Fire Clay Works are requested to lodge the same within eight days with Mr A.G MacDonald, 20 St Vincent Place, Glasgow. 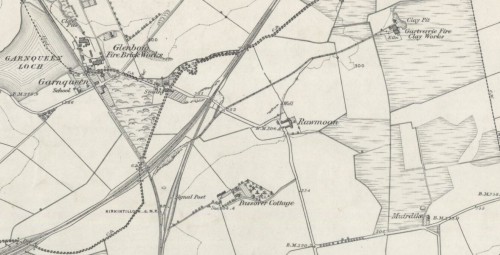 1875 – Falkirk Museum has a quotation from the company offering silicate bricks at 57s 6d and firebricks at 42 s 6d per 1000, and ground fireclay at 5s 6d per ton. Silicate fireclay/Ganister was quoted at 8s per ton.

07/05/1880 – Dundee Courier – Accident on the railway. A labourer named William Johnstone was severely injured at Gartverrie Fire Clay Works, Glenboig where he was employed. He had been engaged in shunting wagons when he stumbled and fell before the wheels, which passed over his right leg between the ankle and the knee, crushing it terribly. Johnstone was attended by Dr Wilson, Coatbridge who ordered him to be removed to Glasgow Royal Infirmary.

04/07/1885 – Airdrie and Coatbridge Advertiser – A milkman named William McGowan (21), residing at Wellhouse, New Monkland, was shunting some waggons at Gartverrie Brickworks, near Coatbridge, on Wednesday, when he accidentally fell off a waggon and had both his legs run over by the wheels, besides sustaining severe injury about the shoulder. He was taken to the Royal. Infirmary, where one of his legs was amputated. He lies in a critical state.

31/08/1885 – Glasgow Herald – Mining exhibition and refers to The Gartverrie Fireclay Company being present.

31/05/1886 – Glasgow Herald – The International Exhibition refers to the Gartverrie Fireclay Works as exhibiting.

21/10/1897 – Glasgow Herald –  At the 15th annual meeting of the Glenboig Union Fireclay Company Limited there is a reference to having in the past year acquired the works of Gartverrie.

29/04/1911 – Airdrie and Coatbridge Advertiser – Glenboig Fireclay as a mineral. In the House of Lords on Thursday the Lord Chancellor and Lords Macnaghten, Shaw and Robson commenced the hearing of an appeal by the Caledonian Railway Company, the respondents being the Glenboig Union Fireclay Company (Limited). The appellants sought to interdict the respondents from working beds or seams of fireclay or clay in the land, of Gartverrie and Ramoan underneath or adjacent to the Castlecary and Garnkirk branches of the appellant’s railway near to Glenboig Station. The question for decision is whether the beds and seams of fireclay of which the respondents are tenants are so far as situated in the lands acquired by the appellants to be deemed to be excepted out of the conveyances in favour of the appellants as falling within the exception of mines of coal, ironstone, slate, or other minerals under the lands purchased by the appellants within the meaning of Section 70 of the Railway Clauses Act, 1845. In short, the question is whether fireclay is a mineral within the meaning of that section. The appellants submit that the fireclay in question is not a mineral within the meaning of the Railway Clauses Act, in respect of that it is a common rock of the district and forms the substratum of the soil with, no doubt, other kinds of rock intermixed. They further submit that the fireclay is part of the subjects purchased by them when they acquired the lands. The respondents, on the other hand, maintain that the fireclay is a mineral within the meaning of the Act of 1845 and that the fireclay in question is excepted from the conveyances in favour of the appellants. The Lord Ordinary refused the interdict and the First Division upheld this decision. Against these judgments of the Courts below the present appeal is taken to the House of Lords. Mr . Clyde had not finished his speech opening the case for the appellants when their Lordships adjourned. The Lords heard further proceedings in the case yesterday, and at its conclusion dismissed the appeal with costs.

21/04/1921 – The Scotsman – Refers to the sale of the Gartsherrie Estate including The Gartverrie Fireclay Works and Quarry.

25/09/1931 – Motherwell Times – Deaths – James Craik Bishop of Barncluith, Hamilton, Writer of Glasgow, a partner in the firm of Milne, Boyd and Co and in the Gartverrie Fire Clay Company, a director of the Cadzow Coal Company and of CoatsTrades Hotel Ltd, a secretary of the Scottish Ironmasters Association, of the Scottish Manufactured Iron Trade Employers Association and of the Scottish Steel Founders Wages Association left a personal estate in Great Britain of £24, 636.

c. 1945 – The Company was bought by the Glenboig Union Company for £1,200 who used the sand for brick setting and supply to the local iron foundries. Some building bricks were made. (Note – SBH – These are possible in reference to the bricks marked GV).