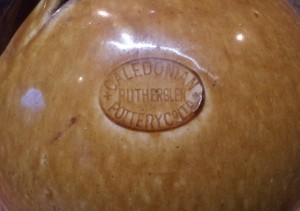 The Caledonian Pottery factory was in production in Rutherglen from 1872 to 1929 and is now considered to be of national significance due to the variety of its products, its massive output, and its extensive international export trade.

In the late 1800s and early 1900s, the Caledonian Pottery and its ‘Ru’glen Broon’ teapots were famous all over the world but, after the factory closed in 1929, this flagship factory lay buried and largely forgotten.

Then, in 2007-2008, the factory site was excavated as part of the M74 Completion Project. In one of the biggest single excavation projects in Europe, a team of archaeologists investigated a number of sites along the proposed route of the motorway. The Caledonian Pottery was one of the three largest sites to be excavated and revealed industrialised pottery production on a massive scale. It also revealed evidence for the first continuous gas-fired kilns anywhere in the world – source 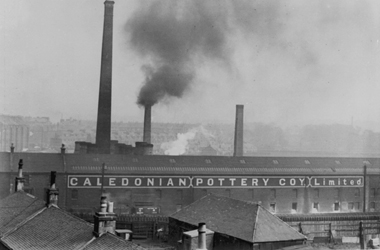 Below – Found in Scottish Borders. 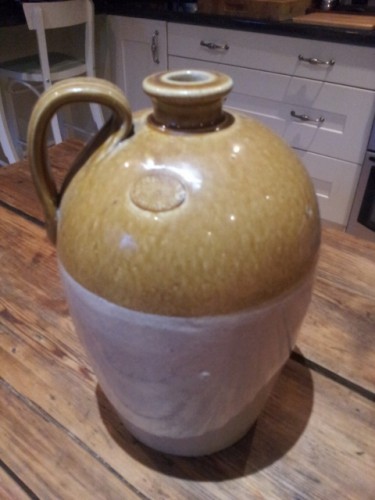 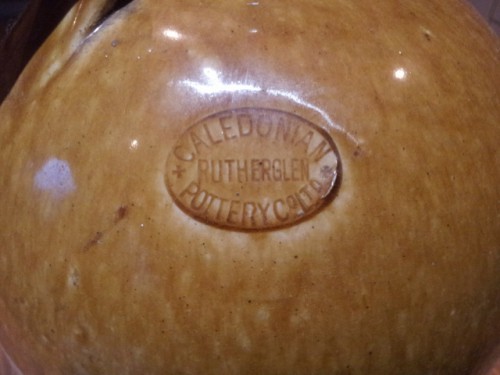 Below – 1852 – Caledonian Pottery, St Rollox, Glasgow. Murray and Fullarton. (Note – SBH – Could this be the same Fullarton as that involved with the Mallsmire Fire Brick Works?) 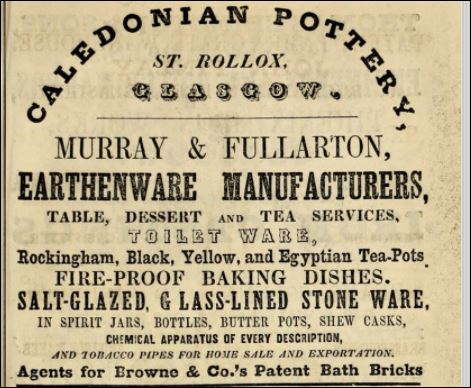 Rutherglen. Caledonian Pottery. The “Caledonian Pottery” at Rutherglen, near Glasgow, was established at Glasgow about 1780 by a joint-stock company, and from the company was acquired, about 1825, by the grandfather and father of the present head of the firm of Murray and Co., by whom the manufactory is carried on. In 1870 the works were removed from Glasgow to Rutherglen, about a couple of miles from that city. At first, fine porcelain and china were made; then cream-coloured printed ware, with Rockingham and salt-glazed wares. In 1851, the demand sprang up for stoneware ale and other bottles, and this has become one of the staple trades of Glasgow and the surrounding district. The goods now produced are the usual classes of ” Bristol ” glazed stoneware, salt-glazed stoneware, cane ware, and Rockingham and Egyptian black wares. In these classes of goods, all the usual domestic articles are very extensively made, both for the home and continental markets. The quality produced is much above the average in excellence, and the goods of this firm are in much repute. A speciality of Messrs. Murray and Co. is their patent ” spongy iron filter ” which has been officially recommended by Royal Commission and has been awarded a medal. It is one of the most perfect and useful of filters, and its principle of construction is thoroughly good. The mark used by Murray and Co. is a lion rampant. 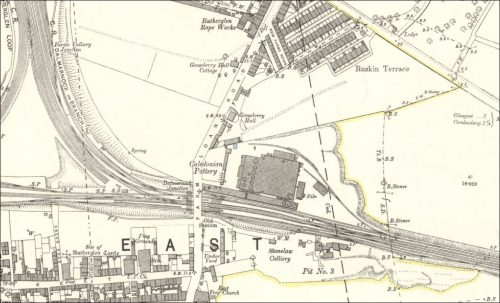