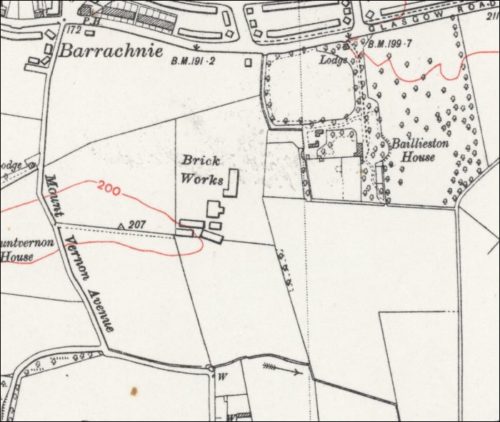 1928 – 1939 – The 1985 publication ‘A survey of Scottish brickmarks’ suggests the works were operated by the Garrowhill Brick Co Ltd during this time.

30/06/1928 – Airdrie and Coatbridge Advertiser – At Barrachnie Colliery, Baillieston, owned by the Mount Vernon Coal Coy., Ltd., a new brick producing plant is in course of erection, and it is stated it will be completed in about a month’s time. On Monday the huge chimney stalk, 120 feet high was finished and a flag placed on the top. In the building of this chimney, 1000 tons of red bricks were used and the time taken to build it was five weeks, supposed to be a record-breaking feat. Messrs William Cleghorn & Son, Newmains are the contractors. All the bricks used on this job are being supplied by the Mount Vernon Coal Coy.’s Broomhouse Brickworks which is producing bricks at the rate of over 100,000 per week. 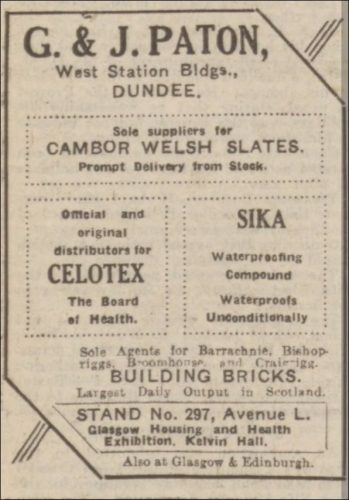 31/10/1928 – Airdrie and Coatbridge Advertiser – The Mount Vernon Colliery Company (Ltd.) is installing at Broomhouse a complete installation of plant on the Buell pulverised Coal System, operating three Lancashire boilers. The same company has recently erected a brickwork at their Barrachnie pit, which, within a month of commencing operations has attained an output of over 20,000 bricks per day. The disposal of output at full capacity is assured for a period of shout three years.

Below – 02/03/1931 – The Scotsman – The Mount Vernon Colliery Co Ltd (In liquidation) – For sale. The following pits and brickworks belonging to the Company including Cadder Brickworks, Bishopbriggs and Barrachnie Brickworks, Baillieston and Broomhouse brickworks … 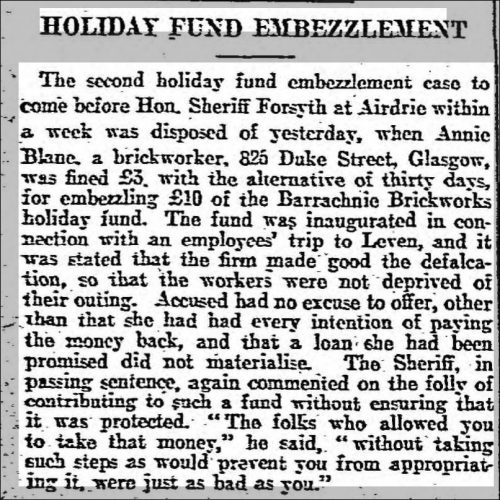 29/04/1933 – Airdrie and Coatbridge Advertiser – In Airdrie J.P. Court on Thursday, ex. Provost Armour and Mrs Wardrope on the bench, two young lads named John McVey, (17), pithead worker, 14 Ellismuir Road and Samuel Affleck, (15), 6 Ellismuir Road Baillieston were accused of on 26th March, at the loaded waggon railway siding at the Barrachnie Brickworks, Baillieston belonging to the Gartocher Coal and Brick Co. while acting in concert, wilfully and maliciously releasing the brake of a railway waggon which was then standing loaded with 12 tons of bricks at the said siding, whereby the waggon ran down an incline for a distance of 500 yards and left the rails, smashing four railway chairs, damaging a set of points and 20 wooden sleepers and thus causing total damage to the extent of £10, or thereby. McVey was further charged that, from the workmen’s both, situated at the breeze bing, at Barrachnie Brickwork, he stole an oilskin south-wester hat, the property of the said Gartocher Coal and Brick Co. Proof was led at some length by Mr J. Dunn Russell, the Procurator Fiscal which resulted in the first accused being found guilty on both charges, and he was fined 15s or seven days and the second accused guilty of the first charge and he was fined 10s. or seven days, this fine being payable by the lad’s parents. Fourteen days were allowed for payment.

16/09/1933 – Airdrie and Coatbridge Advertiser – Young people working overtime – In the Airdrie Sheriff Court yesterday, before Hon Sheriff Forsyth, the Gartocher Coal and Brick Co, brick manufacturers, Barrachnie Brickworks were charged at the instance of Mr H W Atkinson, HM Inspector of Factories, Glasgow, with contravening the Factory and Workshop Act, 1901, by employing young persons on certain night shifts and on Sundays in contrary to the Act. Mr Gemmell, writer, Glasgow, on behalf of the Company tendered a plea of guilty. The Inspector said it was a very serious disregard of the law in the interests of young persons. There was plenty of adult labour available at present for both day and night work without employing the young persons already in the employment. Mr Gemmell said it was perhaps curious to find a company giving too much work at this time when there is so much unemployment. But this firm had a very strong demand for their products at the moment which had to be met at once. It was during the month of July and part of August. when some of the workers were on holiday. The employers were desirous of giving their employees holidays as far a possible and with those off on holiday the burden of turning out the work fell on those still on the job. He pointed out that it was not a case of pressing unwilling people to work as these workers were quite eager to get doing it because they were receiving for it, a higher rate of pay, which was very acceptable to them. He thought a modified penalty would suit the case. The Sheriff said there were five charges in the complaint and as they were admitted, he imposed a fine of £1 for each, being £5 altogether, including the cost of prosecution.

22/12/1934 – Airdrie and Coatbridge Advertiser – The Henry Boot Housing Estate at Barrachnie is now assuming commendable proportions. Such names as Gordon Avenue, Weirwood Avenue. Garrowhill Drive. Springhill Road and Barrachnie Road are becoming common to the Baillieston postal area. Many occupiers are moving into this ‘garden city’ before the New Henry Boot Housing estate at Barrachnie is completed and over 100 men have found work here within the last few months. The brickwork adjoining is enjoying a boom. 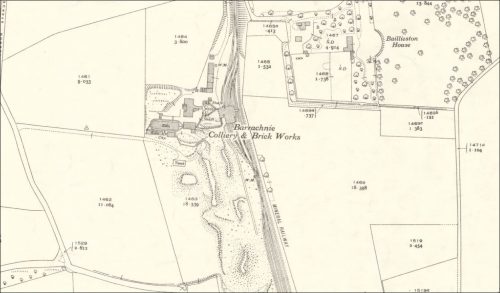 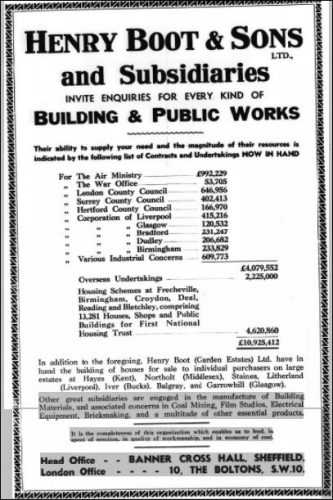 05/03/1937 – Motherwell Times – H.M. Inspector of Mines has given notice to Lanark County Council of the abandonment of the following mines:—Shettleston 3-4 Mine, belonging Gartocher Coal and Brick Co., …

05/06/1937 – The Scotsman – New pit at Shotts. Good news for Shotts district is contained in the announcement that the Gartocher Coal and Brick Company, Baillieston, have acquired the mineral rights at Knoweton Colliery, Shotts, from the owners of the colliery, Messrs Barr & Thornton. Knoweton Colliery was closed down six years ago, and most of the pithead machinery has been dismantled. The new owners intend to develop a mine from the surface, and a staff of men are now preparing the surface plant in readiness to begin work on the mine. The new mine contains seams of rich coal, which will take many, years to extract. It is expected that work will be ready at coal-producing within the next two months, providing employment for about 200 men.

17/07/1937 – Airdrie and Coatbridge Advertiser – The well known firm of Henry Boot and Co, Sheffield and Garrowhill Garden Estate builders have now acquired from the Gartocher Coal and Brick Coy, the brickworks at Barrachnie. The Gartocher firm were the last to produce coal in the Ballieston district, at their Shettleston Colliery which adjoins the brickworks. The colliery has now been closed down for some time.

17/07/1937 – Airdrie and Coatbridge Advertiser – An enquiry was also made into the death of David Hunter, engine fitter, Leckethilll, Gartcosh, who died on 8th April, at the Royal Infirmary, Glasgow from a fracture of the base of the skull sustained by him as a result of an accident on the same day at the doorway of the engineering shop at Barrachnie Colliery Garrowhill occupied by the Gartocher Coal and Brick Co.. Ltd. While in the employment of the Glenboig Union Fireclay Co.. Ltd., General Refractories, Glenboig, he was removing a coal cutting machine from the engineering shop by means of a chain block and tackle attached to an unfixed overhead steel girder. The girder was pulled from its position and fell to the ground striking the deceased on the head and body.

27/09/1937 – The Scotsman – New mine at Shotts. Rapid progress is now being made with the development of the new mine at Knowton Colliery, Shotts, which was taken over some time ago by the Gartocher Coal and Brick Company, of Barrachnie. The driving of the mine has now been completed, and underground development is now taking place. Electrical equipment is being installed, and it is hoped to have the mine producing coal shortly. The mine contains rich seams of coal, which will provide about 20 years of work for nearly 150 men and it is understood that the company intend to recruit most of the labour required locally.

05/04/1938 – The Scotsman – H.M. Inspector of Mines has given notice to Lanark County Council of the abandonment of the following mines: Rowantree Mine, Newhouse, belonging to the Gartocher Coal and Brick Co, Ltd, Shotts …

04/06/1938 – Airdrie and Coatbridge Advertiser – William Ure, labourer, Greenshield Road and John Henderson, labourer, 4 Rhinsdale Terrace, Baillieston, were fined for the theft of coal by Justices ex- Bailie Mulvey and Bailie Pirie at Airdrie J.P. Court on Thursday. They pleaded guilty to having on 19th May from the refuse bing at Garrowhill Brickworks belonging to Henry Boot (Garden Estates), Ltd., while acting in concert with another man, to the complainers unknown, stolen 1 3/4cwts. of coal. Henderson also admitted a previous conviction. Mr J. Dunn Russell. J.P. Fiscal said that the material on the refuse bing was used by the complainers for making bricks and recently they had been greatly annoyed by people stealing coal from the bing. On the day in question, the accused, who were regular offenders, were seen along with another man gathering coal. The manager decided to make an example of them and sent for the police. When the police arrived the men were still gathering coal and when they saw the police they made off across the bing. The police followed them to Broomhouse. Both the accused were known to the police and they were charged with the offence. They had nothing to say. Ure was fined 7s 6d and Henderson 10s.

24/07/1939 – Daily Record – Reference to Messrs H Boot, the well known firm of housebuilders at Garrowhill, Ballieston (Were the brickworks working at this time?).

15/08/1942 – Airdrie and Coatbridge Advertiser – … within the office of the works foreman at Garrowhill Brickworks, a young girl (16) told a police constable that she had been assaulted by a young man unknown to her, the truth being that she had not been assaulted and caused the constable and other members of the Force to devote their time investigating the false charge … 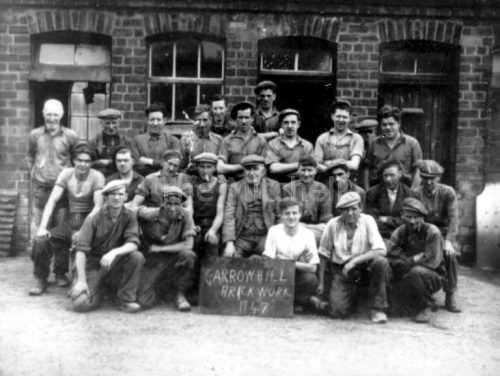 29/10/1948 – Motherwell Times – On the spot welfare helps brickworkers – Employees in brickworks in Lanarkshire and throughout the country have now been brought into line with workers in other industries in the provision of welfare facilities which include canteen or mess room accommodation at their places of employment. These welfare innovations have been granted to the brickworkers by The Clay Works (Welfare) Special Regulations 1948 which came into operation on 1st October.

The facilities which now become available to brickworkers are washing facilities with clean towels, protective clothing and adequate accommodation for this clothing, together with laundry and canteen or mess room accommodation, a shelter for kiln workers and an ambulance room with equipment and first aid requisites.

Interviewed by the ‘Times’ reporter Mr W Scholes, district organiser for the Transport and General Workers Union said that these revolutionary changes in welfare facilities in the clay industry though long overdue, were satisfactory to officials and employees and placed the latter on the same scale as other factory workers.  The greatest benefit in Scotland through the changes will be experienced in Lanarkshire and Fife where the largest number of brickworks are in operation. Lanarkshire clay industries where the new welfare facilities will be enjoyed are

09/12/1955 – Motherwell Times – Colliery bings to be removed. Planning permission has been granted to Messrs Henry Boot (Garden Estates) Ltd, Garrowhill Brickworks, Baillieston for the removal of the colliery bings at Newhouse – Newarthill area.

c. 1965 – The 1985 publication ‘A survey of Scottish brickmarks’ suggests the works closed around this time. It was apparently still owned by Henry Boot (Garden Estates) Ltd when it closed.