25/06/1863 – Stirling Advertiser  – Article on the opening of the Alva Railway for passengers on 03/06/1863. To celebrate, between 60 and 70 gentlemen dined in the Johnstone Arms Hotel…..Mr Moir proposed (a toast) “The Manufacturing industry”. Mr Ross replied. He said he had great pleasure in returning thanks on behalf of the manufacturing interests of Alva. This was a great day in Alva for they had, at last, got a road to their town. Till very lately he considered they were rather behind the age. But now they had got a coal work, a brickwork and various other works all of which had greatly added to the trade of the place …

Below – 17/10/1863 – Alloa Advertiser – Alva Brick and Tile Works – Messrs King and Penny having become lessees for the above Work, beg to intimate farmers and others in this neighbourhood that a large supply of bricks and draining tiles are kept in stock. Prices the same as in the local market.

21/11/1863 – Alloa Journal – Alva Brick and Tile Works – Messrs King and Penny having become lessees for the above brick and tile works beg to intimate that they have now on hand a quantity of drain tile which will be sold cheap. K & P beg to intimate that they are prepared to receive orders for brick and tile and give estimates for any quantity required. Alva 15/10/1863.

Below – 14/01/1865 – Alloa Advertiser – Alva Brick and Tile Works – The subscriber begs to intimate that having taken the above works he has on hand a large quantity of building bricks and drain tile which will be sold at moderate prices. Wm Robertson, House and Property Agent. Alva 13/01/1865

08/04/1865 – Alloa Advertiser – To Brick Makers – Wanted, a good brickmaker of good character and sober habits. A weekly wage and an engagement for the season may be entered into. Apply at the Alva Brick and Tile Works, Mr William Robertson, Proprietor.

18/01/1868 – Alloa Advertiser – The Alva Brickwork with the kilns, machines and whole implements, utensils and fittings will be sold or let with immediate entry. Apply to Morrison & Cunningham, writers, Stirling who will give information and receive offers. Stirling 17 January 1868.

(Mr Stein is believed to be  John Stein b. 1834. He was a brickmaker and emigrated to America and set up a brickworks in or near Philadelphia. He married in American in 1859 but returned to Scotland in 1861/1862. He returned to brickmaking and rose to become a partner in a small building brickworks in Alva. They had a son in 1862  who they named John Gilchrist Stein and he was to become one of the great stalwarts of the Scottish and indeed global, brick manufacturing industry) 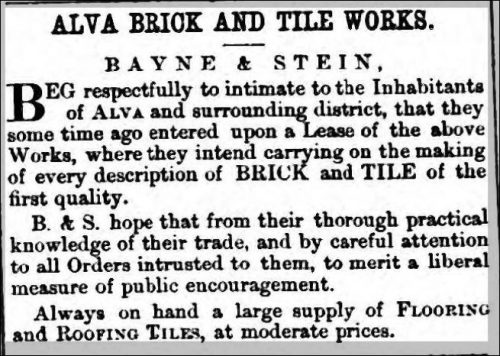 06/06/1874 – Alloa Advertiser  – Alva Brick and Tile Works to be sold or let with immediate entry. Operations may be begun at once. Apply at the Works, Alva, Stirling.

19/09/1874 – Alloa Advertiser – Alva Brick and Tile Works to be sold or let on favourable terms. For particulars, an application may be made to James Wallace, Solicitor, 25 Mar Street, Alloa.

14/10/1897 – Edinburgh Evening News – Fatal fall from hay cart – Yesterday while John Philp, Alva brickfield was assisting his men to cart some hay from the field, he was on top of a hay cart tightening the rope, which broke. Mr Philp, losing his balance fell from the top and was killed, his neck was broken. 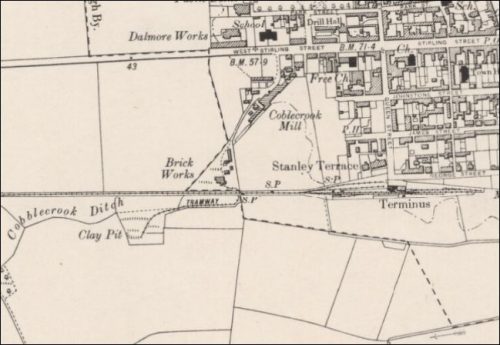 1907 – Plans are submitted to turn the Alva Brickworks into a dairy.