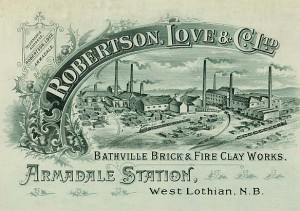 Bonnyrigg Fire Clay Works, Bonnyrigg, Midlothian – The exact site of these works is not confirmed.

Vladimir states  – “Brick with the mark produced at the company’s “Eldin Colliery Company” in the town of Bonnyrigg 13km south-east of Edinburgh, Scotland. The first mention of this plant dates back to 1880. And already in 1896. in this place mine Polton (Poulton) owns mining company “Lothian Coal Company Ltd.”, which has existed at least until 1945. The estimated date of production of the bricks has not been determined since there is no evidence that the bricks continued to be made and the new owner of the mine.”

The text above refers to “Eldin Colliery Company” and “Lothian Coal Company Ltd” both local companies from the area around Bonnyrigg.

The  “A Survey of Scottish Brickmarks” by the Scottish Industrial Archaeology Survey references a brickmark as  NCB BONNYRIGG. If this is the case the brickworks were still operating at least in 1947 when NCB took over many sites. (Note SBH – As far as I am aware there is no known example of this … to be confirmed with the National Museum of Scotland)

The Ordnance Gazetteer of Scotland 1834 to 45 mentions “the pre-eminent manufacture … bricks and tiles at Portobello, Millerhill, Newbattle, Rosewell, and Bonnyrigg”.  The OS Six-inch 1st edition, 1843-1882  also shows an “Old Tile Works” and adjacent kiln at Upper Dalhousie, less than a mile from Bonnyrigg. However, suggestions indicate that this may have been producing fireclay drainage pipes (tiles) rather than bricks.

Below – 14/12/1874 – The Scotsman. Eldin Oil and Colliery plant for sale. There is a reference to 30,000 bricks being sold. This could just be a stock of bricks they had on-site or it could be a reference to a brickworks although no brickwork plant is detailed. 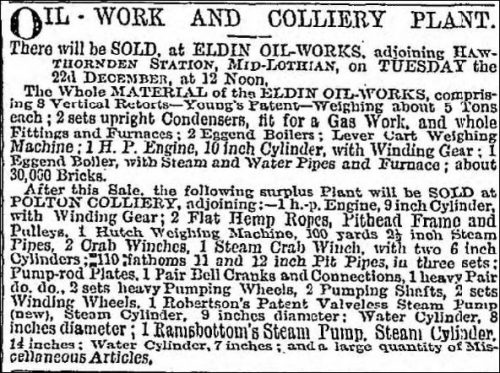 21/04/1879 – London Daily News – Mr Gladstone’s candidature for Midlothian – … One (banner) carried by the men of the Bonnyrigg Fire Clay Works had the inscription ” Gladstone is a brick and on him, we build our hopes”…

21/04/1879 – The Scotsman  – The Bonnyrigg Fireclay works were represented by a pair of flower potts, in front of which it was proclaimed in bold type that “Gladstone is a brick and on him, we build our hopes”

Below – 25/01/1907 – Linlithgowshire Gazette – Mr Thomas Robertson. Born in Kilwinning. Managed the Hurlford fireclay works.  Robertson, Love and Co were first established at the Bonnyrigg fire clay works and then they moved to Bathville. 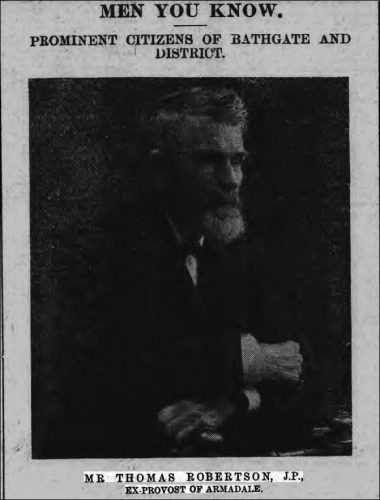 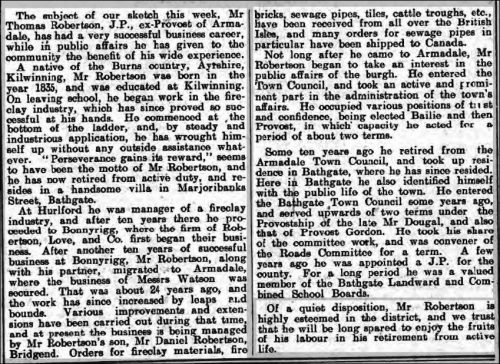 Below – 13/10/1922 – Linlithgowshire Gazette  – Late William Selkirk. For over 40 years he was the works manager at Messrs Robertson & Love’s Fireclay Works, Bathville. He was trained to the trade of fireclay pipe and brick making in the Dunbar area and then worked at Messrs Roberston & Co’s works as oversman at Bonnyrigg over 50 years ago.