I am assuming these are not the same works as the Grange or Earlsferry Brickworks near Elie, Fife or the Grange Farm, Brick and Tile Works, Near Kirkcaldy 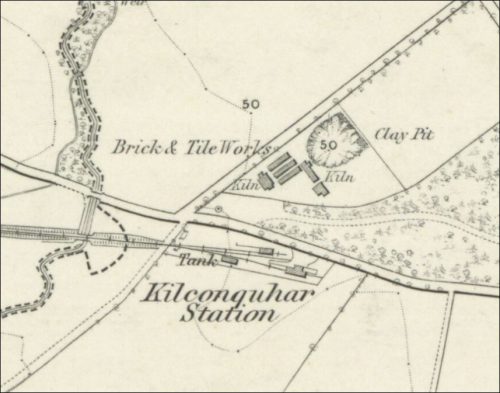 1853 – 1855 – ScotlandsPlaces – [situation] About 1 1/4 Mile N.W. by N [North West by North] from Elie. Brick and tile works having all the necessary offices such as kilns etc attached. The property of Mr Baird.

1853 – 1855 – ScotlandsPlaces – A brick and tile work on the Estate of Elie the property of Mr Baird. It consists of two kilns for burning the bricks or tiles in a number of sheds for drying purposes a clay pit and a small dwelling house, all the buildings are in good repair & large quantities of bricks & tiles are made here.

Below – 30/08/1855 – Fife Herald – Annual dinner – Kilconquhar – Annual dinner – The annual dinner given by the tenants of Broomlees Tilework to their workmen took place within the work itself last Wednesday, John Wood, Esq., in the chair, and George Roger, Esq, croupier.  The whole of the workmen were present, together with several farmers of the neighbourhood, a few other friends, and the minister of the parish.  An excellent dinner was provided within the drying room of the Tilework, with the workmen themselves had tastefully decorated for the occasion.  After dinner, a variety of toasts were proposed, and the company, having spent a most agreeable evening, separated at an early hour.  This dinner, met on foot, mainly believe through the instrumentality of John Wood, Esq., of Colinsburgh, has been given for many years past, nor is any dinner party of the whole year looked forward to with greater interest by those who have the good fortune to be invited.  Its influence in cementing the ties that bind masters and men is of the happiest kind, and all parties learn from it to esteem and another more, and to take a kindlier interest in each others welfare.  It helps in no small degree to promote that quiet and orderly conduct for which the workmen of Broomlees are certainly as much distinguished as any similar body of workmen in the county. 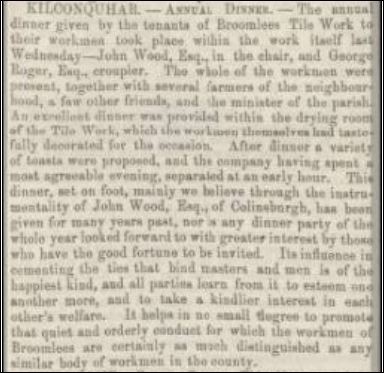 30/08/1855 – Fife Herald – East of Fife Railways – Issues regarding the proposed route of the railway … to terminate such deviated line at a point at or near Broomlees Tile Work aforesaid, and on the south-west side of the turnpike road from Elie to Balchristie …

Below – 06/08/1857 – Fife Herald – East of Fife Railways opens and the directors organise additional trains to carry patrons on opening day trips … in the afternoon the directors, a number of the shareholders and other friends dined together at Kilconquhar in a large shed tastefully fitted up for the purpose on Broomlees Brick Work. Between 80 and 90 gentlemen were present …

Below – 03/06/1863 – Dunfermline Press – Displenishing sale Broomles Tile Works. (Broomlees) – Thursday, 4th June 1863. Displenishing sale of Broomlees Tilework, Fifeshire at Kilconquhar Railway Station. Half-way between Elie and Colinsburgh. There will be exposed to sale by Public roup, on Thursday, the 4th June. The whole tile, pipe, and brick machines shed and other erections, &c, consisting of, amongst other things, viz. :- pipe machines, in Excellent Working Condition, for Pipes from 1 to 4 inches diameter.
Large.    ”     For Pipes 6, 8, 10, and 12 inches in diameter.
Patent (Chamberlain’s) brick machine.
Dies corresponding to the above all sizes, from 1 to 12 inches.
Dies for Horse Shoe Tiles and Soles.
One weighing machine, as good as New.
Moulds for pantiles, floor tiles and bricks.
Potter’s utensils, pipe lifters, pumps, wheelbarrows, tables, tresses and screens.
Flue Fire Brick, 20 in. By 17. ; Roof Tile; Floor Brick; Common do.; Free Stone, Whin Stone; Shelving; Posts; Roofing; Cast Metal Wheels; Doors and Windows, &c., &c.
Also, an eight horsepower engine, with Boiler and Bruising Rollers.  Tile Makers, Builders, Farmers, and others will find this a good opportunity of supplying themselves with a great many useful Articles.

The sale to commence at one o’clock, after the arrival of the second train. Mr Bowman Auctioneer.

NOTE.- Those from Edinburgh and the North will be in good time by the second train, and those from Glasgow and the West by the first train, via Stirling, Dunfermline, and Thornton Junction, on the Edinburgh, Perth, and Dundee Railway, returning the same day by the last train from Kilconquhar at 6.50 P.M. 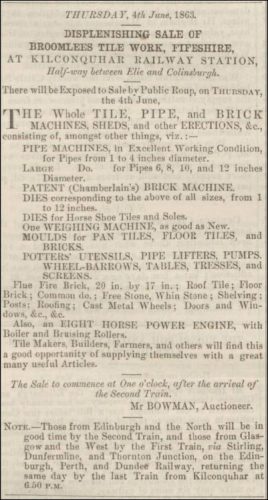 17/05/1888 – Dundee Courier – (Possibly connected to the brickworks?) – The action against a Kinghorn builder – In the Kirkcaldy Sheriff Court some time ago an action was instituted at the instance of T. & J. Lochtie, smiths and carting agents, Kinghorn, against Henry Harding, builder, Kinghorn, concluding for the sum of £73 15s 10d, being balance of account for carting bricks and stones and material and supplying goods.  The defence was that a special arrangement was come to between the parties to cart the bricks at 2s 6d per thousand and the stones at 2s per race.  The sum of £49 10s was admitted, and it was stated that defender had granted a bill for £35.  the pursuers denied any special bargain, and with reference to the bill it was still lying uncashed.  After having heard the case fully debated Sheriff Gillespie yesterday issued an interlocutor in which he found that defender had failed to prove that the carriage of the stones and bricks formed a special contract as alleged by him; that, considering the distance-four miles each way-from Grange Quarries to Kinghorn, and taking into account the maintenance of men, horses, carts, &c., the sum of 2s 6d per race was in itself a reasonable and moderate charge; that accounts were rendered to defender in which pursuers charged at the rate of 2s 6d per race; and that it was not until the pursuers put their account into the hands of a law agent, that any objection was taken to it.  His Lordship finds in law that defender, having continued to employ the pursuers in knowledge of their charges, and having taken advantage of the credit allowed him, is in these circumstances barred from objecting to their charges.  He therefore discerns against the defender, finding the pursuers entitled to expenses.