15/05/1875 – Alloa Advertiser – Deaths – At Winchburgh Brickworks on the 8th inst, Janet H Hunter, the beloved wife of Mr John Stein, in the 40th year of her age. (Note SBH – This is the same John Stein that was a partner at the Alva brickworks in 1868 and the father of John Gilchrist Stein) 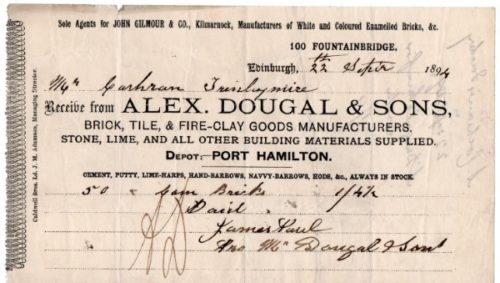 28/08/1908 – Linlithgowshire Advertiser – Machinery breakdown at brickwork. The employees of the brickwork have been thrown idle for a week owing to the shaft of one of the engines breaking.

18/10/1935 – West Lothian Courier – Meth drinkers sentenced. At Linlithgow Sheriff Court yesterday, three “meth” drinkers were sentenced by Sheriff Robertson to ten days imprisonment without the option of a fine. The accused were Henry Devlin, William Brannan and Margaret Devlin, all in custody and they pleaded guilty to having on October 17, within a kiln at the brickworks, Winchburgh conducted themselves in a disorderly manner and committed a breach of the peace. Brannan admitted that they had been drinking “meth”.

08/06/1945 – Linlithgowshire Advertiser – A letter from the Department Health stated that they understood the Area Director of Brick Production had taken action from which it was understood the Winchburgh Brickworks would soon be returning to production.

22/03/1974 – West Lothian Courier – Are they boring for oil near Winchburgh, for more than half a century a leading shale oil mining centre. The setting up of a boring rig in a field west of the village has set tongues wagging. With oil so much in the news, that was inevitable. It is hardly likely to be an oil probe, however. To tap the “black gold,” if any, means boring down many thousands of feet and that is well beyond the scope of the rig which has been set up. The work in hand is probably that of making a test of clay deposits known to exist in the area in question. Not far from the test bore, and on the other side of the Union Canal, was Winchburgh Brickworks, operated for many years by the Linlithgow firm, Wm. Dougal & Sons. The Winchburgh brick was recognised as being one of the best and hardest industrial bricks produced in Britain and came from a very rich alluvial blue clay. The Miller construction firm, Edinburgh, bought the Winchburgh plant from the Dougals and operated it for the last year or so of its life before abandoning it. This type of clay contains no combustible material at all and this means that coal is used to fire the kilns, making the bricks expensive to produce. If brickmaking is resumed st Winchburgh, the villagers hope that the planning committee will see to it that the village is not left with the same legacy of scars it inherited from the previous enterprise. During that time the clay was won by an opencast or quarrying method and no attempt was ever made to fill in and restore these workings. The clayhole, covering many acres, was left as it was, an ideal adventure playground for many generations of Winchburgh children but a dangerous and unsightly one nevertheless.

The following Dougals are all sons and daughters of my great – great grandparents, William Dougal & Marion Ferguson of Linlithgow, all of them born either in or around Linlithgow.
Elizabeth Dougal  1816 – 1884  married Thomas Newton  1816 – 1884. Thomas as a young man was a sailmaker at Carronshore, Larbert, and then was a tenant at Drumkilbo Tileworks from about 1856. (Owner, Rt. Hon. Lord Wharnecliffe). Continued till at least  1871, but by 1881 Thomas was farming at Kingoldrum, Angus.
Janet Dougal   1819 – 1896  married Robert Meikle 1818 – 1897 of Linlithgow. They were also at Drumkilbo Tileworks during the same years as Elizabeth & Thomas Newton. By 1871 Robert was farming at Polmont.
James Dougal 1821 – 1893 –   Erected Craigend Brickworks, and with his brother, John Dougal and others carried on the business successfully for 17 years. In 1868 Callendar Coal Company was formed, which James was coal master of, employing 310 men in 1881.
John Dougal  1825 – 1899   was with James at Craigend Brickworks, and by 1861 was farming at Muiravonside.
Alexander Dougal   1828 – 1899   as a young man was at Rentonhall Brickworks, Morham, East Lothian, ( learning the trade ? ) About 1859 he was at Forgandenny Brick & Tileworks as the tenant. By 1869 he was back in Linlithgow, and Winchburgh Brick and Tile works had begun. With 2 of his sons in the business, Winchburgh Brickworks continued beyond Alexander’s death in 1892.
Drumkilbo Tileworks made the bricks for the railway tunnels at Dundee Railway Station.
Winchburgh Brickworks used the canal for transporting bricks and coal to their depot in Edinburgh. They had a yard at Linlithgow Canal Basin for the same purpose. Another relative was in charge of this and lived in the cottage on the canal which is now a tearoom.
It would be fitting for it to be recorded that 5 members of the family were all connected with early brickmaking.
3 others were successful boot and shoemakers in Linlithgow, and my great-grandfather, Laurence Dougal was an iron founder in Bathgate, but that is another story.
*************************************

Many thanks to Alex Steven for forwarding the following photographs

Below – <1914 – Winchburgh. Union Canal. Bricks on a barge coming from Winchburgh Brickworks. The bricks appear to have been thrown into the barge. Was this the normal practice or were these broken 2nds anyway? 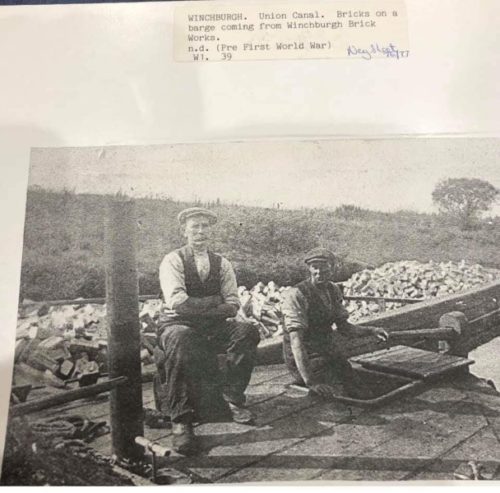 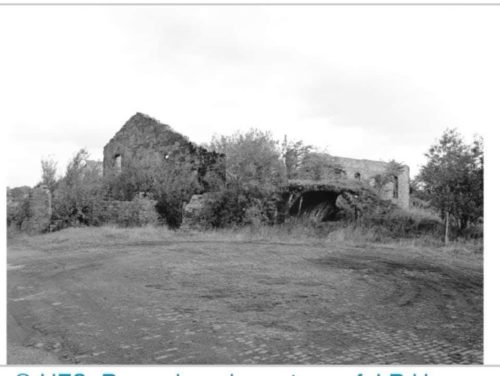