Referenced as part of a Highland Council planning application in 2000.

Below- 11/02/1932 – Dundee Courier  – Glasgow sale of Inverlochy furnishings.  – A Prince Charlie relic was sold in Glasgow yesterday for 14s. The ‘relic’ was described in the catalogue of the first Inverlochy sale as “old brick with dogs footprint, broken from a wall by Prince Charles Edward Stuart … ( Possibly connected with Torlundy?) 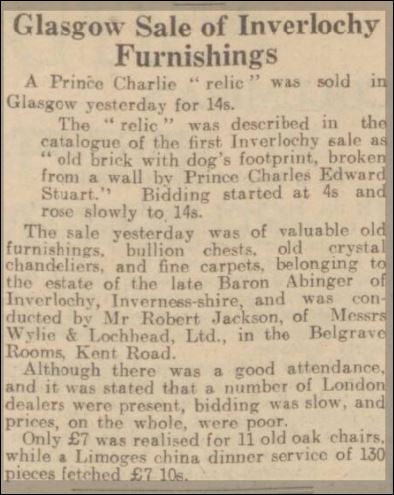 The following information was received by Ian Suddaby – it was opened in the early 60s by Robert Howie & Sons & Dokra. This was opened to supply the building of the Pulp-mill (Scottish Pulp and Paper-mills) out at Annat. At this time the quarry was owned by C.W Michie and they supplied the aggregate to make the bricks.  (SBH note – this is likely to be the same as Dockra – click me ).

Below – 25/06/1970 – The Glasgow Herald – Makers of composition bricks at Avonbridge and Brucefield Works and sole distributors of Dockra, Cults and Fort William bricks. (Note – SBH – Are these the same Brucefield Works. This date seems to contradict the Canmore date for the brickworks closure i.e in the 1960s).