13/09/1850 – Kelso Chronicle – “Stirches Brickworks. – In taking a retrospect of the numberless discoveries that have from time to time been made we find that many of them, however important to the human race, have originated in causes accidental and trifling. The rubbing of amber gave rise to the science of electricity. The project of sailing to the East Indies in a western direction led Columbus to the discovery of the new world and the circumstances of widening a miller’s dam opened up the auriferous regions of California. In like manner, an unforeseen casualty lately led to the discovery of an inexhaustible supply of a very superior clay for the moulding of bricks, etc., on the estate of Stirches in the vicinity. The proprietor, Mr Chisholm, with a spirit of intelligence and enterprise for which he is celebrated, determined to give the above work’s a fair trial, and we are happy to add that from the paramount quality of the clay, and the superior management of Mr Chalmers, contractor, everything has gone on admirably well, and we have no doubt will ultimately prove advantageous to the proprietor and the public. As the work is only in its infancy, for the present nothing but bricks are manufactured, but in due time drain tiles will also be made, the extensive use of which will be a great benefit to the improving farmer, as the expense of a heavy transit will be saved. Nor is this all. The builder will be enabled to erect houses quicker and cheaper and to yield a higher percentage on the money invested than by using the trap rock of any species, which is the material generally used in building here. But the benefits of the above works will necessarily extend to the mass of the population, the manual working classes, by giving an impetus to the erection of improved dwellings for the operative orders in a flourishing town like this there is not only a great scarcity of houses, but many of them are totally unfit for habitation. Many of the lower orders are doomed to live in the lowly cellar, and what is in many cases little better, exalted to the attic garret, which is exacted degradation. Such abodes are at antipodes with all sanitary measures and the health of the lieges, hence it is that we wish every measure of success to every discovery that is likely to diminish these evils, and elevate the taste, comfort, and happiness of the people.

04/10/1850 – Kelso Chronicle – Building clubs … It is proposed to build the cottages of brick which can now be obtained from the brickworks on the Cavers Estate and will also for a short time, be obtained nearer home from the works on the Estate of Stirches …

16/04/1852 – Kelso Chronicle – Serious accident – On Monday forenoon as Mr James Turnbull, Joiner, Stirches was taking some measurement associated with the steam engine at Stirches Brick Work, the engine was set to motion without anyone being aware that he was in danger, when he was caught by the machinery and most severely injured, especially about the lower part of the head before the engine could be stopt.(stopped). Medical assistance was speedily obtained, when it was ascertained that, though seriously hurt, there is yet hopes that he will ultimately recover.

Below – A close-up, That 4 leaf clover building would appear to be the kiln(s) and does seem to be unusual in design. 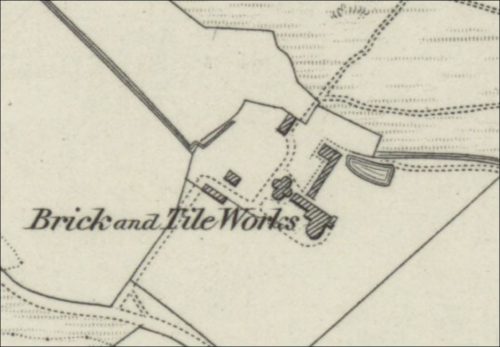 09/1860 – Hawick Advertiser –  Stirches Brick and Tile Works – Here is now ready for delivery at the works, a large stock of excellent brick and drain tiles, of this seasons make. Prices moderate.

17/01/1868 – The Scotsman – Obituary for Scott Chisholme of Stirches states “… A small landed proprietor, he was a man of considerable enterprise and spent much money and time in endeavouring to establish a pottery on his estate but was unsuccessful. He was the owner of an extensive brick and tile works …”

In our obituary of yesterday, there is recorded the death of Mr Scott Chisholm of Stirches, a gentleman who from his long connection with the county of Roxburgh, and his constant residence on his own estate, is entitled to more than an ordinary notice in these columns.  Mr Chisholme was a staunch Conservative; but as a public man, was best known during the struggle between the North British Railway Company and the Carlisle, Hawick, and Langholm Railway Company, of which he was chairman, for the construction of the line between Carlisle and Hawick, and the course it should follow.  The former company were eventually successful ; and while the inhabitants of the district are now satisfied that the principle for which Mr Chisholme contended was the sound one for their accommodation, it is believed that the company would likewise express their regret that they ever embarked in a project so fruitless, as Mr Chisholme always predicted their course on that occasion must prove.  As commandant of the 4th Roxburgh Corps of Volunteers, Mr Chisholme’s loss will not be easily supplied.  A better officer, from his having had the advantage of a military education or more steady supporter of the movement, it does not number on its list.  Of his own property, he was a constant and successful improver; while his extensive brick and tile works were of public benefit, as furnishing employment to so many labourers in Hawick and the neighbourhood.  The loss of such a man must be felt in a county, and his example is a stimulus to his only son, who succeeds him, to follow in his father’s steps. 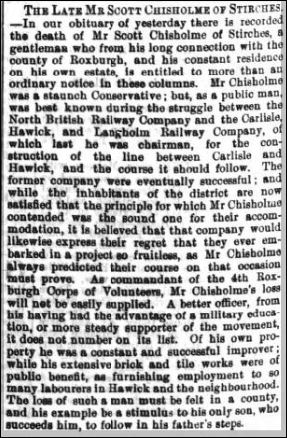 23/01/1868 – Southern Reporter – The death of Mr Scott Chisholm … A small landed proprietor, he was a man of considerable enterprise and spent much money and time endeavouring to establish a pottery on his estate but was unsuccessful. He was the owner of an extensive brick and tile works … 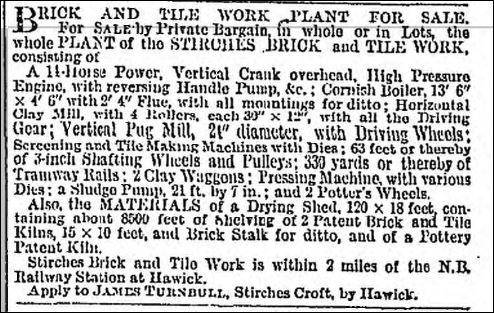 20/02/1873 – The Scotsman – Tile Work to let – To be let on lease with immediate entry. About 2 miles distant from Hawick with steam engine machines and other plant as at present in use. Offers to be lodged with Messrs Geo & Jas Oliver, Writers, Hawick on or before Friday 28th February current.

(Note – SBH – It appears the works may have never been re-opened after 1873 as the following entries relate to references of the works by only by a local location and not a working business.)

19/11/1897 – The Scotsman – Hawick Archaeological Society Meeting. A paper by Mr John Kennedy was read. It was entitled ” Lapsed trades of the Burgh”… At one time there was a large brickwork at Stirches in which 5000 or 6000 bricks per day were made.”

25/12/1931 – Hawick News – Reference to the Cross Country Handicap taking place and the runners running past Stirches Brickworks – It would be disused but it is obviously still known as the brickworks for point of reference reasons. 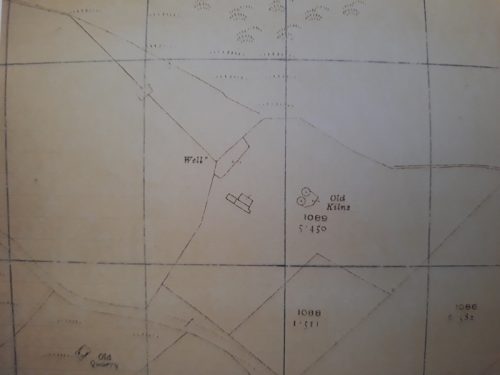 Below – 2016 – Aerial view of the area where the Chisholme Brick and Tile Works once stood.

Below – Sherds of pottery found on-site and believed to have been manufactured there during the time of the pottery. These were kindly donated by Ian Lowes. 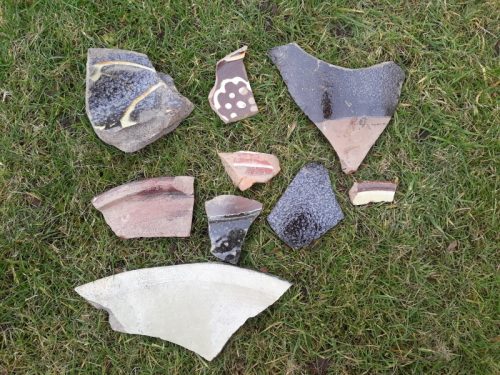 Below – November 2016 – Various photographs showing the brickworks, a sandstone engine mount and claypit in distance 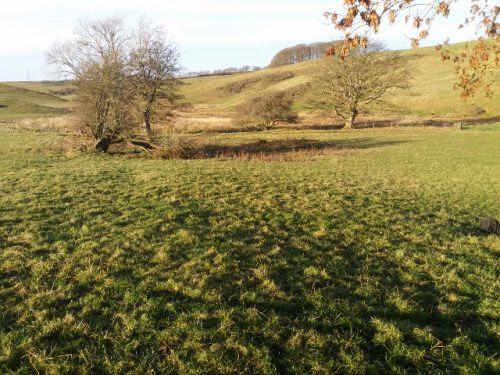 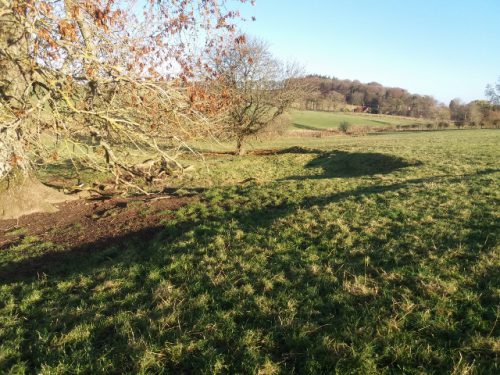 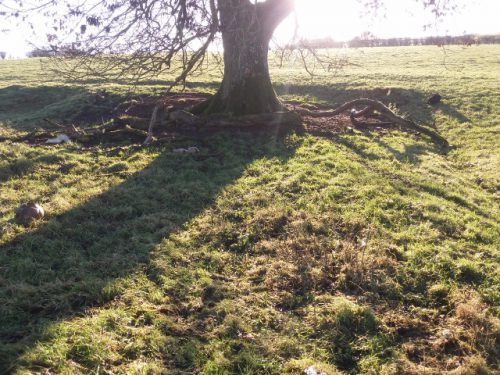 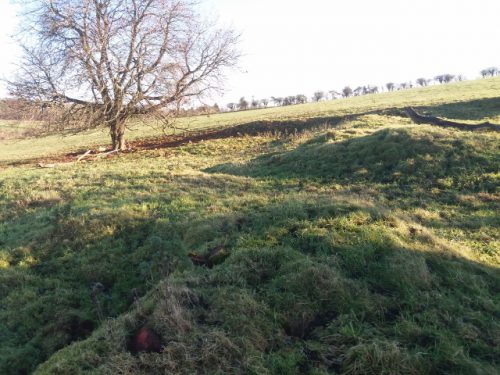 Below – Remains of a circular or curved kiln base? 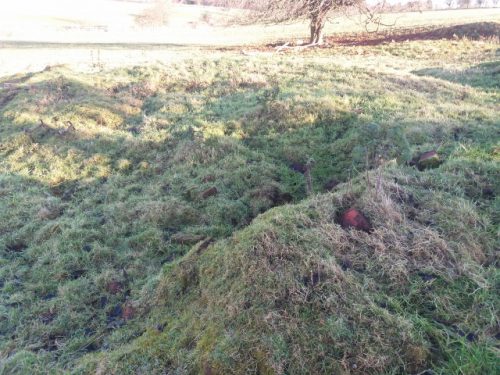 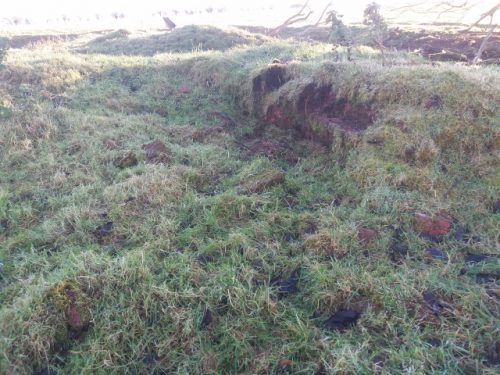 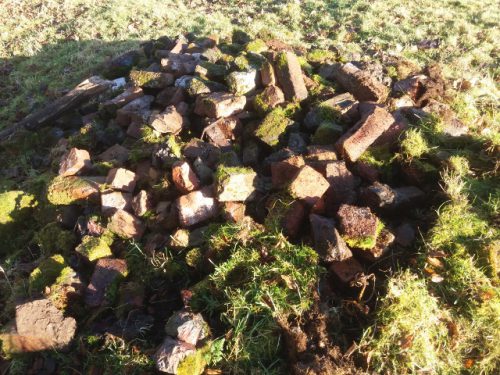 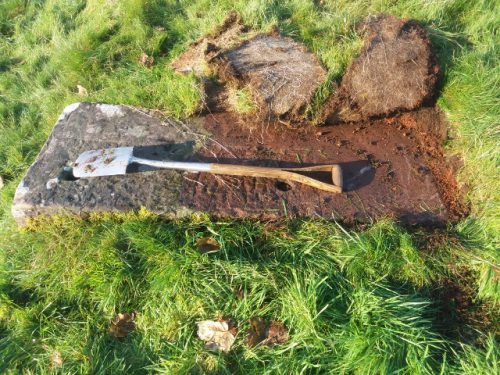 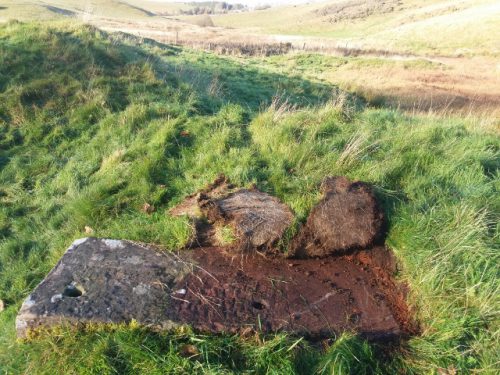 Below  – A collection of bricks and drainage pipes found on-site and undoubtedly manufactured there.

Below – 2 drainage pipes which were probably ‘wasters’ due to their shape. 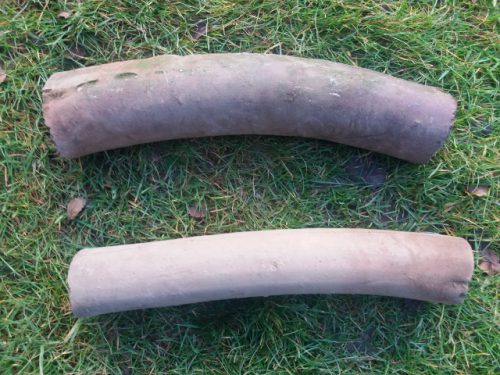 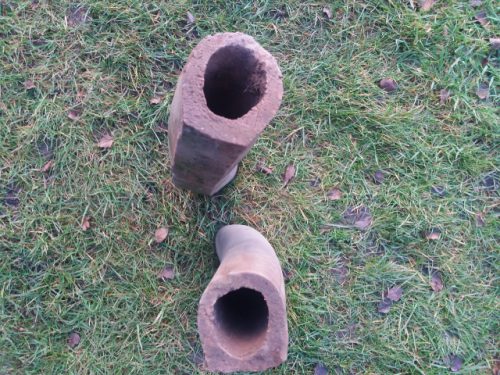 Below – 3 different sized bricks and a floor tile. All unmarked. 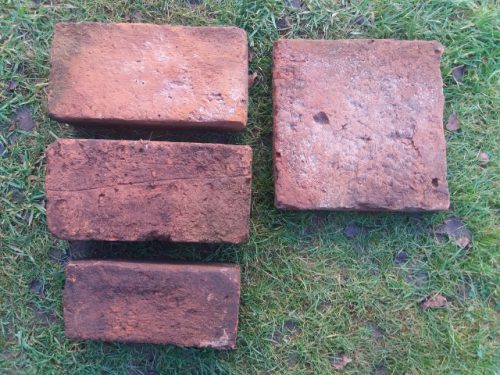 Below  – A brick showing ‘melt’ damage, most likely the result of prolonged exposure to the heat of the kiln. 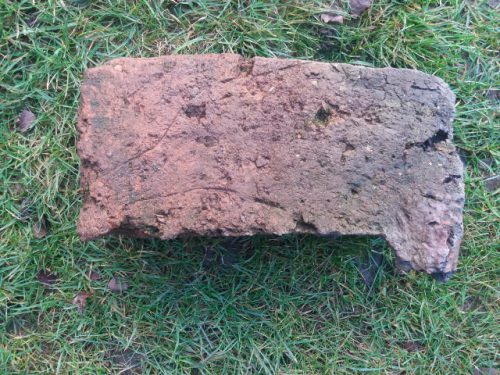 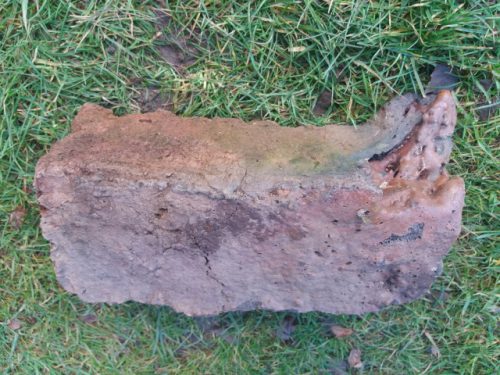 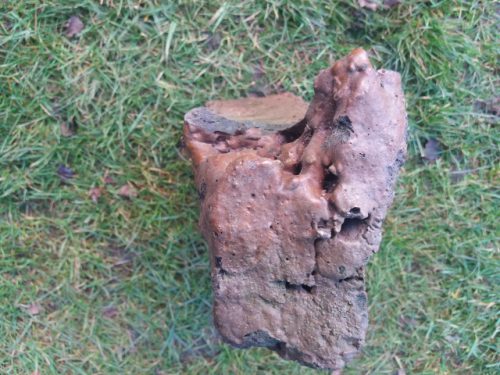 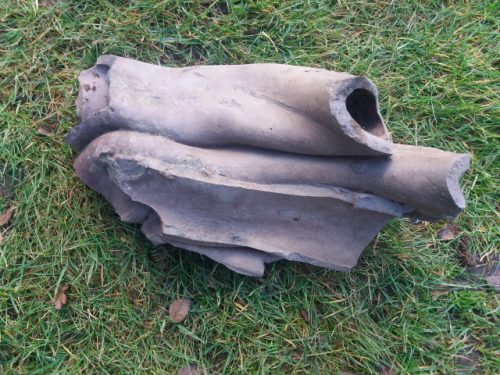 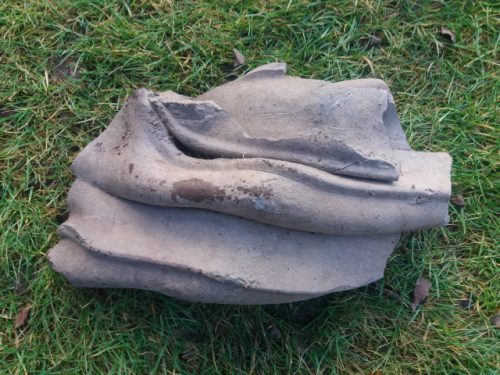 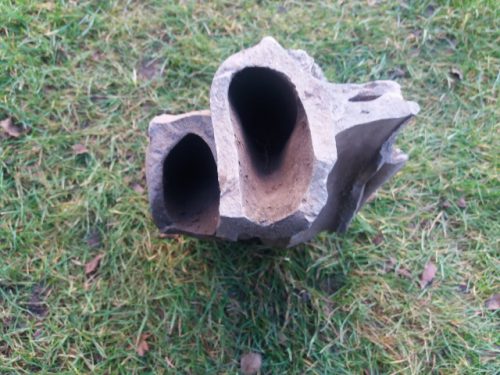 Below – Two invoices relating to the Stirches Brick, Tile and Pottery Works. Dated July 1861 and Dec 1854 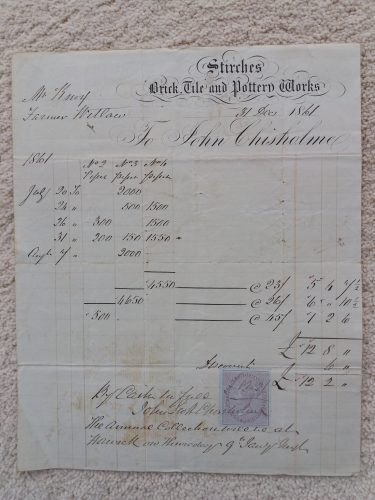 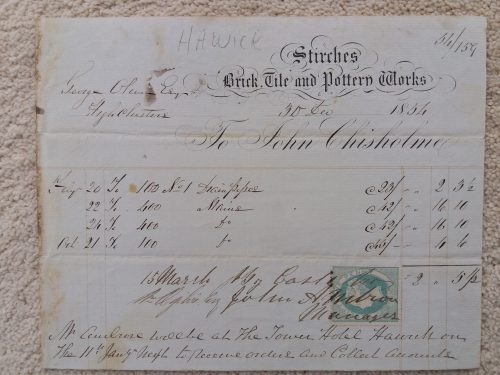 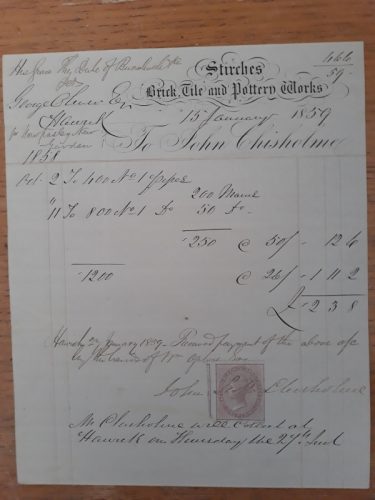 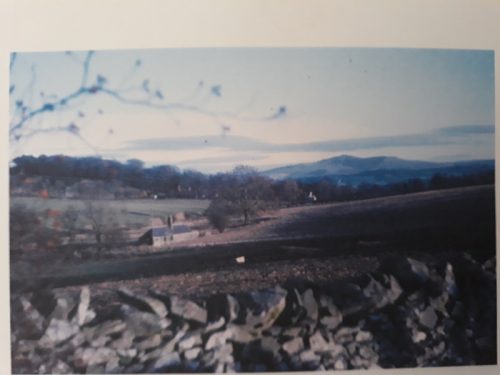 Below – This brick was found in a drystane dyke at Acreknowe, Hawick by Ian Lowes. Note the textured surface which may have been the result of being moulded in a sand lined mould or perhaps it could be the mark left by hessian sacking protecting the brick from the elements while air drying prior to firing.  Acreknowe is not far from the site of the old Stirches Brickworks so could this brick be a product of those works? 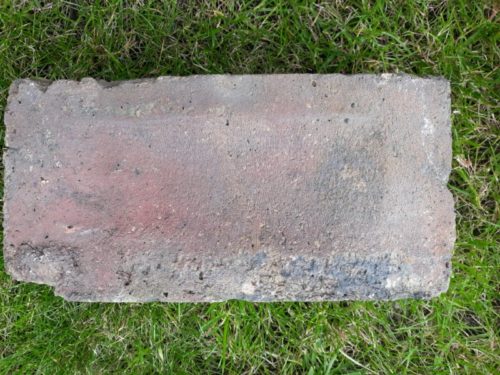 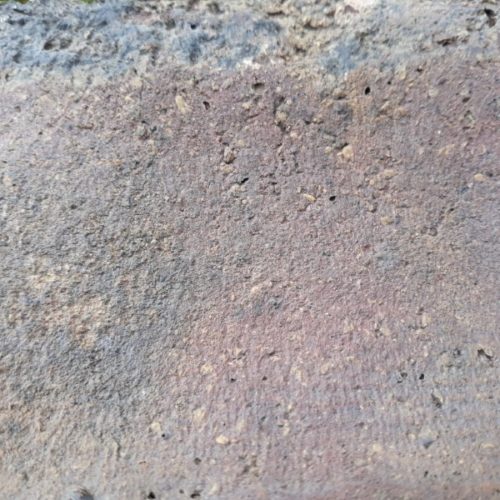 Note – could this be the same works at Calaburn?