Below – 1944 – 1969 – It is possible that the building marked ‘Precast Concrete Works’ is the where the Dunbrick Co Ltd manufactured their cement-based bricks. 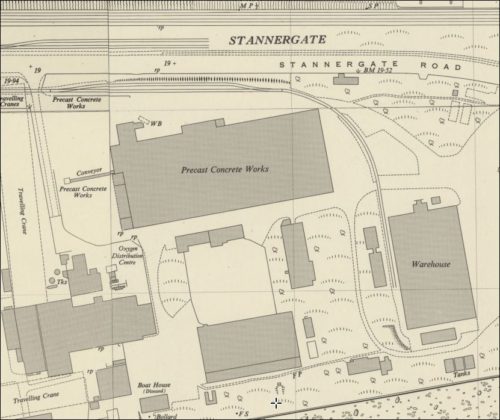 04/05/1946 – Dundee Courier – Dundee may have a new brick factory. The Alexandra Transport Co Ltd, Glasgow, are interested in a site at Dundee Harbour for a brick factory. The site, extending to three acres is at Stannergate. A jetty would allow small steamboats to load and discharge the material for the factory. They would like a 20 years’ lease. An alternative site is two acres at King William Dock, presently occupied. The ground at Stannergate has not yet been derequisitioned by the Admiralty but negotiations with the Harbour Trustees are going on.

01/07/1946 – Dundee Evening Telegraph – Complaints of high rental charges for new industries in Dundee Harbour area were voiced at a meeting of the Harbour Trust to-day. The Board were considering a recommendation by sub-committee that two acres of ground at Stannergate be leased to the Alexandra Transport Co., Ltd., for a brickworks at 25s a pole. Mr Charles Buick thought the charge too high, in view of the nature of the industry. It would be £225 per acre, and new industry could hardly be asked to carry such high ground rental. Seconding a remit back, Bailie Alex. Scott said there was an impression that the Harbour Board was not at all enterprising in encouraging industry around the harbour area. Moving adoption of the subcommittee’s recommendation. Mr J. Barlow pointed out that the Alexandra Transport Company were quite willing to pay. As the sand and brick would be delivered in the harbour area, there would be practically no expense for road transport. He did not think the ground would require much development for the industry. Adoption of the recommendation, lease the ground at 25s per pole for 14 years, was agreed by 14 votes to 3.

12/10/1946 – The Courier and Advertiser – The Alexandra Transport Co Ltd who recently took ground at Stannergate for 14 years for a brickworks, were given permission to have their lease made out in the name of a subsidiary company, The Scottish Dunbrik Co Ltd (Note spelling!). Mr Matheson read a letter from the Ministry of Transport asking for observations on an application by the Tay Sand Co Ltd for permission to dredge an additional 150,000 tons of sand per annum from the river. This would double the amount of sand to be lifted. It was agreed no objection should be offered for granting the permit for a year, but that the trustees should reserve the right to review the situation.

02/09/1947 – Dundee Evening Telegraph – New Industries. In an appendix of new industries in Dundee, Sir Garnet gave the following details, showing the number of workers to be employed: … Dun-Brik Ltd – 85.

23/09/1947 – The Scotsman – A new brick factory with an output capacity of 43,200 bricks per 8-hour shift will begin production at Stannergate, Dundee at the end of the month. Scottish Dunbrick Ltd are to produce a coloured concrete facing brick of a type not hitherto manufactured in Scotland. Tay sand, Angus whinstone and English cement will be used in the manufacture.

09/05/1949 – Dundee Courier – Scottish Dunbrik, Ltd., a new Dundee industry, recently told the city Housing Committee that unless they could obtain local orders they would have to close down and pay off 35 men. The Housing Committee ordered an investigation into how the local made bricks might be employed in present housing. Councillors met representatives of the firm and of Mowlem (Scotland), Ltd., contractors erecting 200 permanent type Blackburn houses at St Mary’s, Downfield. The building contractors were told that the City Architect had approved the concrete brick manufactured by Dunbrik, Ltd., as suitable for use in the construction of Corporation houses. Also, it was cheaper than the composition brick at present being used for Dundee Blackburn houses. The Corporation felt there was no apparent reason why bricks should be brought in from Fife and other areas at dearer prices. It was agreed Mowlem. Ltd. would use the Dunbrik product for the underbuilding of the houses and for the construction of one sample superstructure on the understanding that if it proved satisfactory they would be prepared to use the brick generally. In view of the prices which came to light during the negotiations, a sub-committee has recommended that the maximum price paid for bricks used in all Corporation housing schemes be reduced immediately from 142s to 130s per 1000.

23/05/1949 – Dundee Courier – Dundee made bricks. A report on the use of Dundee made bricks in housing schemes will be submitted to the Housing Committee tonight. A sub-committee interviewed Scottish Dunbrik, Ltd., and building contractors erecting the 200 Blackburn houses at St Mary’s, Downfield. The specification for the Blackburn houses did not provide for concrete bricks, and as contractors’ prices, bonus rates, &c., had been based on the use of a composition brick the committee agreed not to insist on concrete bricks. Where the concrete common or facing brick, manufactured by Scottish Dunbrik, Ltd., was specified by the City Architect in future contracts, bricklayers would be expected to use these bricks.

21/11/1950 – Dundee Courier – Dundee Housing and Factorial Committee last night heard a four-man deputation from Dundee and District Homeless League … Complaints were made about inadequate scaffolding on some housing schemes. Mr Jack Johnstone, speaking for a deputation from the Amalgamated Union of Building Trade Workers, said time on jobs had been wasted. On one scheme 12 men had fallen through scaffolding. Inadequate scaffolding meant skimped work and a bad job. It also meant a high accident rate. The deputation also asked that Dunbrik be used on interior walls of Corporation schemes. The bricks would aid housing, they were cheaper and they would save transport costs. Regarding scaffolding, the City Quantity Surveyor said contractors were responsible for carrying out work in accordance with the requirements of the factory inspectors. The committee accepted this view. The committee decided by seven votes to four to have Dunbrik used where necessary …

09/12/1952 – Dundee Courier – Dundee men stealing bricks. A charge against three men of stealing 2000 bricks at the Stannergate Road factory of Scottish Dunbrik, Ltd., was found not proven at Dundee Sheriff Court yesterday. The alleged offence, between September 17 and 19, was denied by Wilkie Smith, The Hillocks, Barry; Peter Donoghue, c/o Morris, 45 Cowgate, Dundee; and Robert John McGechie Byrne, Pitkerro Road, Dundee. It was brought out in evidence that a driver employed by Dunbrik’s subcontractor saw a lorry being loaded with bricks at 7.10 on two successive mornings. Lorries were not supposed to be loaded until eight o’clock unless under special circumstances. He told his employer after the first occasion, and the employer, the following day, saw a lorry coming out of the factory loaded with bricks at 7.30 a.m. He took note of the registration number and the lorry traced as belonging to Smith. When the police started investigations they felt someone in the factory must be in league with Smith, and the day and night foremen. Donoghue and Byrne were interviewed. None of the accused gave evidence. Sheriff Thomson, in his judgment, said, regarding Smith, there were points which did not entirely satisfy him. Of the other two, there was lacking, among other things, such identification which would enable a conviction to be made. He accordingly found the charge against all three not proven.

31/12/1953 – Dundee Courier – Petrol tanks enquiry.  Why Dundee opposes harbour site. Evidence during the concluding stages of the harbour oil tanks case in Dundee City Chambers yesterday centred largely round projected developments of Caledon Shipyard. The Esso Petroleum Co., Ltd., have appealed against the decision of the corporation refusing planning permission for a storage depot on the ground south of the Dunbrik factory at Stannergate … If they were to take over the ground presently occupied by Dunbrik that would accommodate very nearly all their needs, and they would not require any of the ground leased to Esso. That would still not meet the fire risk question, however. The siting of the Esso wharf could be a matter of adjustment. Re-examined by Mr Lyle, Mr Parker said he did not think the Dunbrik ground would be available, so he had excluded it from his plan … Provided an arrangement could be made to get possession of the Dunbrik area there was room for both a Caledon expansion and Esso. There was no suitable alternative site for the oil installation. It was not a practical proposition in a plant of this size to lay down pipes inland. It would require six separate pipes for six products. That was not economic. A single pipe for the six products would increase the fire risk.

26/07/1954 – Dundee Courier – Oil company gets permission for harbour depot … Having regard to all these factors he granted planning permission. His decision was final. The site provisionally leased to the Esso Company is south of the Dunbrik factory and east of Caledon Shipyard.

c. 1969 – The 1985 publication ‘A survey of Scottish brickmarks’ suggests the works closed at this time.