(Note – SBH – It is entirely possible that the Possil Brickworks were previously known as the Lambhill Brickworks, Lambhill, Glasgow. If anyone can confirm or challenge this consideration then please let me know).

Below – 29/09/1869 – Glasgow Herald – Bricks and equipment for sale at the Brickwork, Possil near Lambhill Bridge.

Below – 09/12/1889 – Glasgow Herald – Saracen and Eastfield Coal Pits and Brickwork for sale. The upset price is further reduced to £3000. There will be exposed for sale by public roup within the Faculty Hall, St George’s Place, Glasgow upon Wednesday the 11th day of December 1889 at 230 o’clock afternoon. The above pits and brickworks, including machinery &c but excluding floating stock to be taken over at a valuation. All is formerly advertised. The works are in first-rate order and are conveniently situated for the Glasgow market. The colliery was valued by Messrs Wm Robertson and Laird, Glasgow in December 1888 at £7829 13s 11d. A brickwork attached to the Saracen Colliery, fitted with the most modern machinery, has been acquired at a cost of £1000 … Note if not sold as a going concern the machinery and plant will be broken up. (Note – SBH – I am uncertain exactly which brickworks this refers to. It is possibly the Possil Brickworks and as such I will record it here meantime. The attached 1896 map shows the Saracen and Eastfield Coal Pits and the PossilBrickworks immediately adjacent to Eastfield although the 1889 advert suggests the brickworks were attached to the Saracen Pit.) 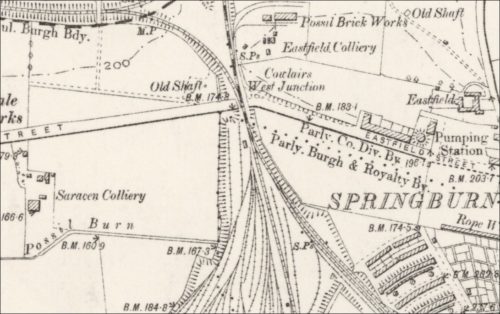 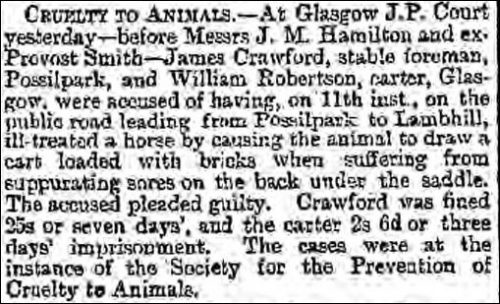 Below – 09/12/1895 – Glasgow Herald – Colliery for sale. The subscriber invites offers for the works, plant and other properties of the Springburn Coal Company, Cowlairs consisting of colliery and brickworks with North British Railway connections. The colliery is fitted with modern machinery and has recently been sunk to the main or house coal, which has not yet been fully developed.

The brickwork at the Eastfield Pit, which has only recently been erected is fitted with the most improved modern plant, including a Bradley and Craven brick machine, also a Hoffman kiln, capable of burning 10,000 bricks per day and requisite railway siding and loading bank.

In connection with the above colliery, the Saracen Pit, without railway connections, also produces house coal, which is readily sold as hill sales. There is also a brickwork at this pit.

The fields extend to about 390 acres or thereby. The plans may be seen at the colliery. Detailed inventories and the lease under which the collieries are held may be seen with the subscriber and offers will be received by him up to Saturday the 21st inst. The subscriber does not bind himself to accept the highest or any offer. Murray, Chartered Accountant, 163 West George Street, Glasgow. 07/09/1895 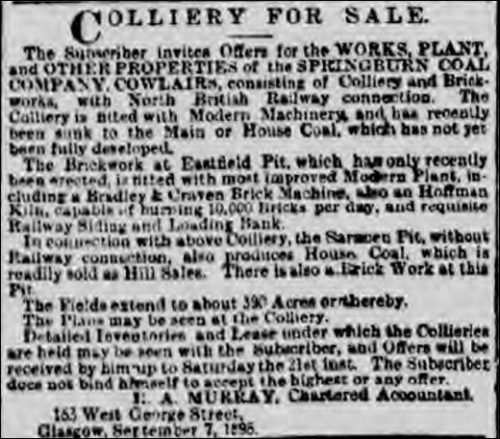 Below – 25/12/1895 – Glasgow Herald – Colliery and brickworks to let on Possil Estate. Presently leased to the Springburn Coal Company. 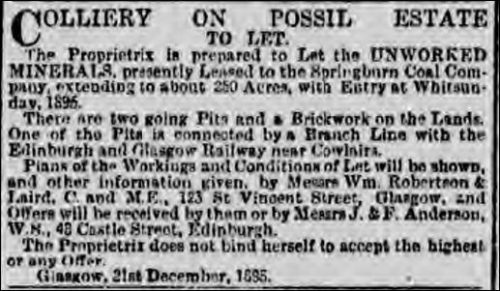 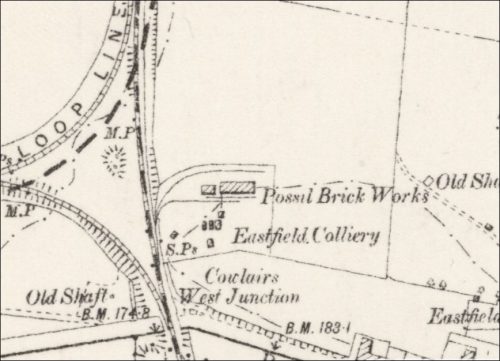 08/01/1896 – Glasgow Herald – Colliery on Possil Estate to let – The proprietor is prepared to let the unworked minerals presently leased to the Springburn Coal Company extending to about 250 acres with entry at Whitsunday 1896. There are 2 going pits and a brickworks on the lands … 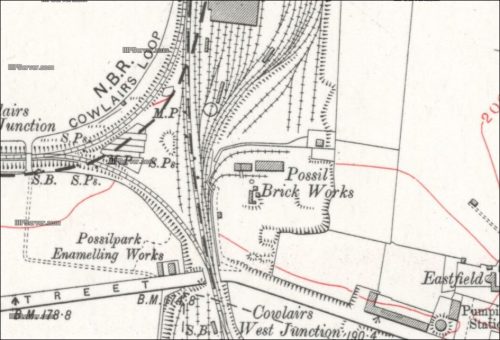 26/07/1921 – The Edinburgh Gazette – Notice – The firm of Springburn Brick and Tile Company, carrying on business at Hawthorn Street, Glasgow, of which the Subscribers were the sole partners, having sold the business to a limited company, has been dissolved of mutual consent, as at 1st February 1921. All accounts due to the dissolved firm are to be paid to Messrs. Jno. & W. D. Hall, Accountants and Auditors, 19 Waterloo Street, Glasgow, who will pay all accounts due by the dissolved Firm. Robert King, The firm of Springburn Brick and Tile Company …

17/05/1932 – Edinburgh Gazette – (In Voluntary Liquidation).  Springburn Brick and Tile Company. Notice is hereby given that a meeting of the creditors of the above-named company will be held in the offices of Thomson, McLintock & Co., C.A., 216 West George Street, Glasgow, on Thursday the 23rd day of June 1932, at 11.30 o’clock forenoon; and notice is also given that a general meeting of the Company will be held on the same date and in the same place, at 11 o’clock forenoon, for the purpose of having the account of the liquidator, showing the manner in which the winding-up has been conducted and the property of the company disposed of, laid before the respective meetings, and of hearing any explanations thereof. Dated this 17th day of May 1932. John Duncan, C.A., Liquidator.