Below – 1864 – Agnes Duncan, Brick and Tile Manufacturer, Dalreoch, Dumbarton (Brickworks are not marked in 1896) 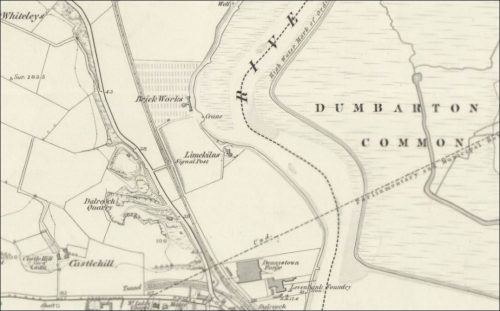 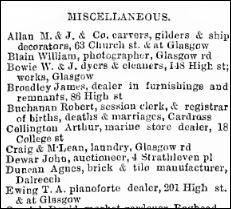 22/06/1889 – Glasgow Evening Citizen – Two men drowned – Dumbarton – Saturday. A bathing fatality occurred this afternoon whereby a lad named McIntyre and a man named Joseph Wilson lost their lives. Mclntyre had gone to bathe in the River Leven, near Dalreoch Brickworks, and was heard calling for assistance. Wilson jumped into rescue, and must have been seized by McIntyre, neither came to the surface. Wilson was an excellent swimmer, and only last weak escaped from the Dumbarton police leaping into the river. 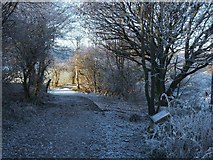 The area to the left of the path was planted with trees after the Second World War; see NS3976: A clearing in the woods on a former brickfield. Much earlier, it had been a brickfield; the brickworks building itself was located not far to the NNW (NS3876: Site of old brickworks) and was shown on the first-edition OS map (of 1862). However, the works were soon to disappear, and are absent from the equivalent 1892 map.

In the part of the woods that are just to the left of the cycle route in the present photograph, the 1892 map shows a building with the label “Limekilns” beside it and an “old sandpit”. As it turns out, “Limekilns” was, in this case, the name of the building. The OS Object Name Book (the 1890s) has the entry “Limekilns – a cottage having some offices and 3 old lime kilns attached hence the name”.

(The site corresponds to “lime works” that are shown on a much earlier “Plan of the River Leven showing the improvements proposed by H.Baird C.E.”; that plan is dated 1824.)

However, by the time of the 1918 OS map, the building is called Brickfield Cottage. On the 1938 map, the building is no longer present, and subsequent planting of trees here has obliterated almost all signs of its presence; some piles of rubble on the slope at the north-western edge of the woods appear to be the only surviving traces: see NS3976: Rubble, possibly from Brickfield Cottage and NS3976: The edge of the woods. (There is also a single small opening in the slope near the mounds of rubble, but I suspect that this simply leads to the large drain that is mentioned at the last-cited link.)

The brickfield is mentioned in passing by I.M.M.MacPhail in his book “Dumbarton Through the Centuries” (1972). While discussing the general strike, which began in 1926, the author describes this area as it was before trees were planted: “because of strikes and unemployment, organised salmon-poaching on a large scale took place regularly in the early 1920s on the Leven at the old brickfield near Mains of Cardross. As the site was very open, police and water bailiffs were unable to effect a surprise raid and the poaching attracted hundreds of spectators who could also act as scouts”. The NS3976: Site of Mains of Cardross Farm is about 500 metres to the north of the site shown in the present photograph; the brickworks itself lay in between, about 160m to the NNW.