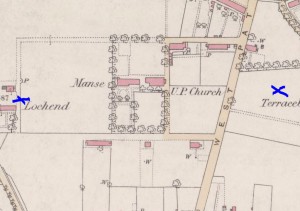 An 1874 book entitled ‘Handbook to Carnoustie’ states on page 4 – ‘He (George Kinloch who bought Carnoustie Estate from Major Philip for £11,000 in 1808) also opened a brick and tile work on what was subsequently known as The Terrace, there being a small bed of clay in that locality. But all trace of this has disappeared and a fine garden now occupies the site’.

Another 1874 book entitled ‘Carnoustie and its neighbourhood’ – Robert Dickson states on page 51  – ” There were brick and tile works from 1866 to 1880 on the raised bank west from Lochend. But the bed got exhausted and is now covered with a young plantation”.

(Note – SBH – My thanks are given to the Local History Centre, Dundee Central Library for the book extract information above).

26/06/1874 – Dundee Courier – Barry. School board meeting … In answer to a request on the part of Messrs Anderson and Guild, of Panmure Brick and Tile Work, to reconsider their resolution that all children of school age engaged at work shall conform to the requirements of the Factory Act, in making one school attendance either in the forenoon or in the afternoon of every school day, the Board re-affirmed the same …

1882-4, Frances Groome’s Ordnance Gazetteer of Scotland described Carnoustie like this – Employment is given by 4 large linen mills, extensive vitriol works, and a brick and tile yard. 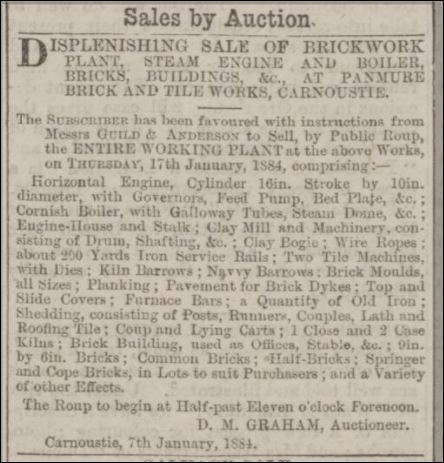