Please note the variations in the spelling of Drumkilbo. 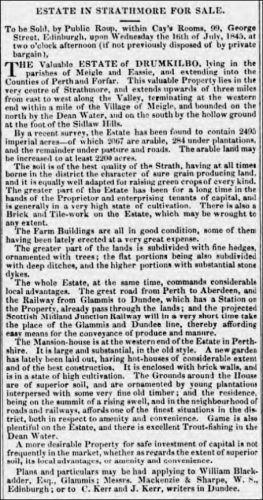 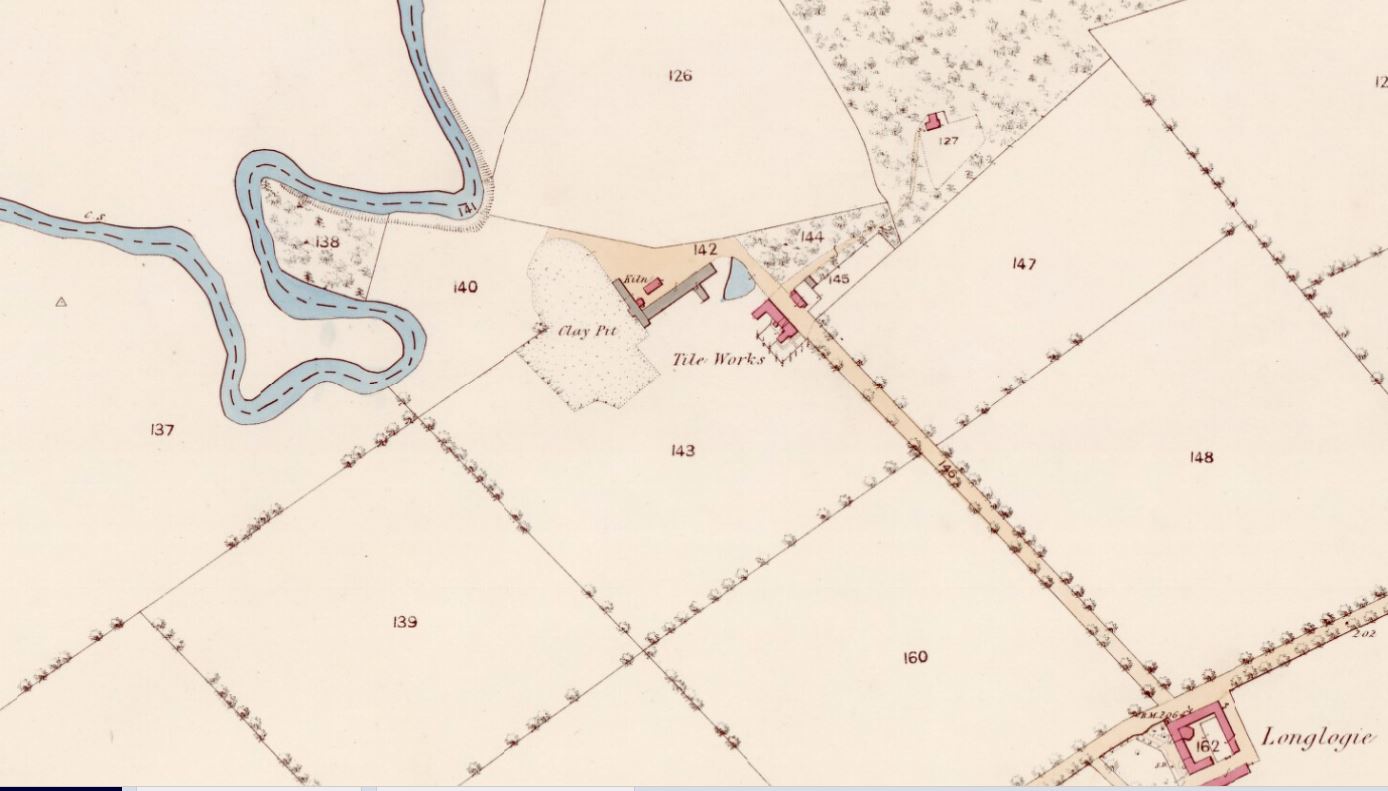 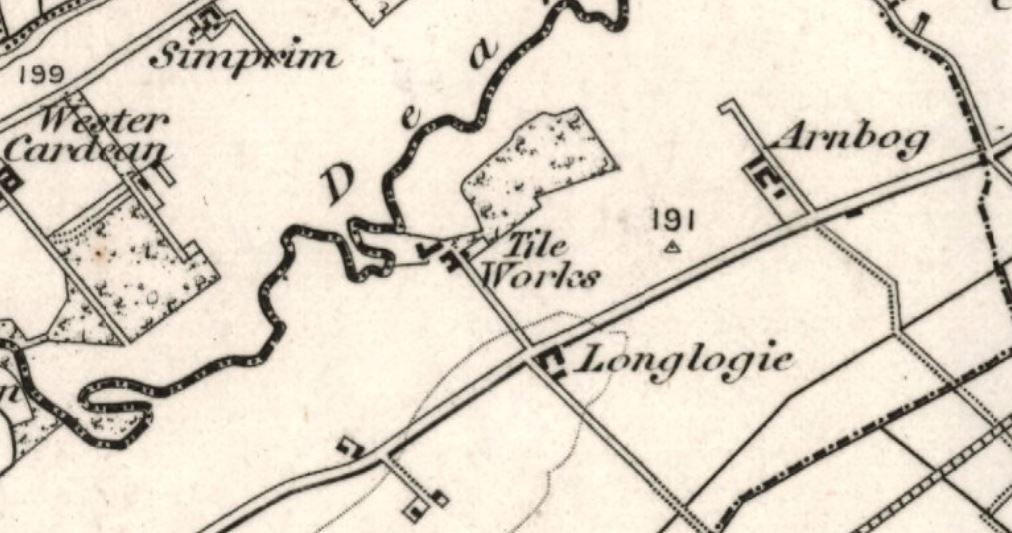 29/05/1877 – Dundee Courier – To be let. For such term of years as may be agreed upon. The Drumkilbo Brick and Tile Works, including the steam engine, boilers and gearing etc with the land attached thereto, extending to about 49 1/2 acres, in the Parish of Meigle, all as at present possessed by Mr Thomas Newton, who is not to renew his lease, and will show the premises to intending offerers. The land may be let with or without the tilework. Meigle Railway Station is  1 3/4 miles distant. Conditions of let can be seen and farther particulars obtained on application to Patrick Murray, Belmont Castle, Meigle; and offers will be received by Andrew Whitton, Couston, Newtyle up to the 15th day of June next. 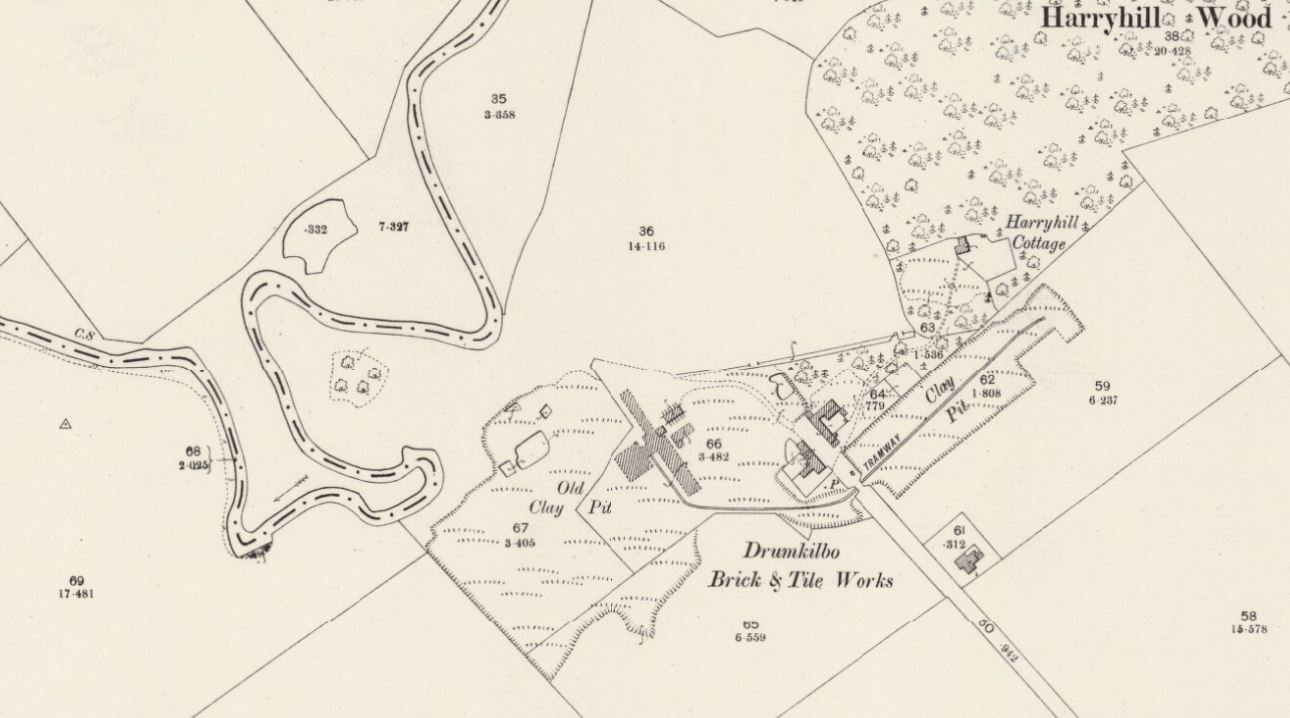 03/11/1925 – Dundee Courier – Mr McCauley, gamekeeper, Drumkilbo has trapped an otter weighing 12½ lbs on the River Dean at the tileworks opposite Harryhill. The otter is a bitch and Mr McCauley has every hope of securing its mate.

Below – 11/08/1928 – Drumkilbo bricks used to build the railway tunnel in Dock Street, Dundee. Reference to Thomas Newton (deceased) and his son Alexander Newton having worked (Tenants?) at Drumkilbo Tileworks. 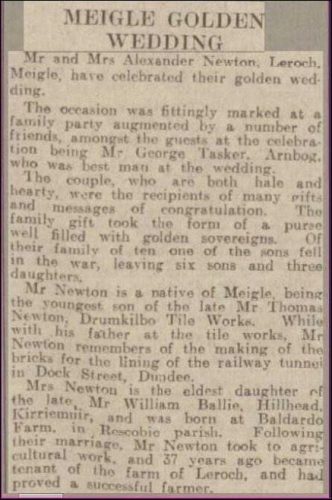 Below – 2009 – Aerial view of Drumkilbo Brick and Tile Works.

The following Dougals are all sons and daughters of my great great grandparents, William Dougal & Marion Ferguson of Linlithgow, all of them born either in or around Linlithgow.
Elizabeth Dougal 1816 – 1884  married Thomas Newton  1816 – 1884. Thomas as a young man was a sailmaker at Carronshore, Larbert, and then was a tenant at Drumkilbo Tileworks from about 1856. (Owner, Rt. Hon. Lord Wharnecliffe). Continued till at least  1871, but by 1881 Thomas was farming at Kingoldrum, Angus
Janet Dougal 1819 – 1896 married Robert Meikle 1818 – 1897 of Linlithgow. They were also at Drumkilbo Tileworks during the same years as Elizabeth & Thomas Newton. By 1871 Robert was farming at Polmont
James Dougal 1821 – 1893 – Erected Craigend Brickworks, and with his brother, John Dougal and others carried on the business successfully for 17 years. In 1868 Callendar Coal Company was formed, which James was coal master of, employing 310 men in 1881.
John Dougal 1825 – 1899 was with James at Craigend Brickworks, and by 1861 was farming at Muiravonside.
Alexander Dougal  1828 – 1899 as a young man was at Rentonhall Brickworks, Morham, East Lothian, (learning the trade?) About 1859 he was at Forgandenny Brick & Tile Works as the tenant. By 1869 he was back in Linlithgow, and Winchburgh Brick and Tile Works had begun. With 2 of his sons in the business, Winchburgh Brickworks continued beyond Alexander’s death in 1892.
Drumkilbo Tileworks made the bricks for the railway tunnels at Dundee Railway Station. Winchburgh Brickworks used the canal for transporting bricks and coal to their depot in Edinburgh. They had a yard at Linlithgow Canal Basin for the same purpose. Another relative was in charge of this and lived in the cottage on the canal which is now a tearoom.
It would be fitting for it to be recorded that 5 members of the family were all connected with early brickmaking. 3 others were successful boot and shoemakers in Linlithgow, and my great grandfather, Laurence Dougal was an iron founder in Bathgate, but that is another story.
Tagged with: Alexander Dougal, Craigend Brick and Tile Works, Crime, Drumkilbo, Forgandenny, George Guild, Glamis, James Guild, Lord Wharncliffe, Newton and Mearns, Rentonhall, Thomas Newton