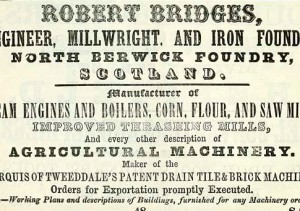 19/10/ 1836 – List of patents referred to in Newton’s London Journal of Arts and Science 1837 (page 117) – states – George, Marquis of Tweeddale, for an improved method of making tiles for draining soils, house tiles and flat and roofing tiles and bricks – the word ‘bricks’ having been omitted in former patent of 25th May last.

09/12/1836 – Patents for inventions. Abridgements of specifications.

No 7253 – George Marquis of Tweeddale. Forming drain tiles by passing the clay from the feeding hopper between two horizontal cylinders on to an endless web, which passes over a shaping cylinder, turned out in the middle to the form of a drain tile ; after which the tile is completed by passing between a pair of inclined rollers and a second shaping cylinder, and is carried by two narrow endless bands beneath a cutting wire, and thence by an endless web to the drying shed.

Making flats or soles by passing the clay between the horizontal cylinders on to an endless band, by which it is carried to the cutting wires.

Flat roofing tiles of equal thickness throughout are made in like manner; but if required to be thin at the upper or nail end, or to have a flat knob or prominence on the end, the upper horizontal cylinder must be suitably shaped. A nail-hole is made in each tile by a punch attached to a lever. An instrument for placing flat tiles on the drying shelves instead of the common peal.

Bricks are produced by modifying the machinery used in manufacturing flat tiles.

House tiles are formed by a pair of moulds, the upper worked by a lever or crank, and the lower capable of sliding on a rod out of its frame to deliver the tile.

The clay is prepared by passing between a pair of large crushing cylinders and is then milled in the usual way. 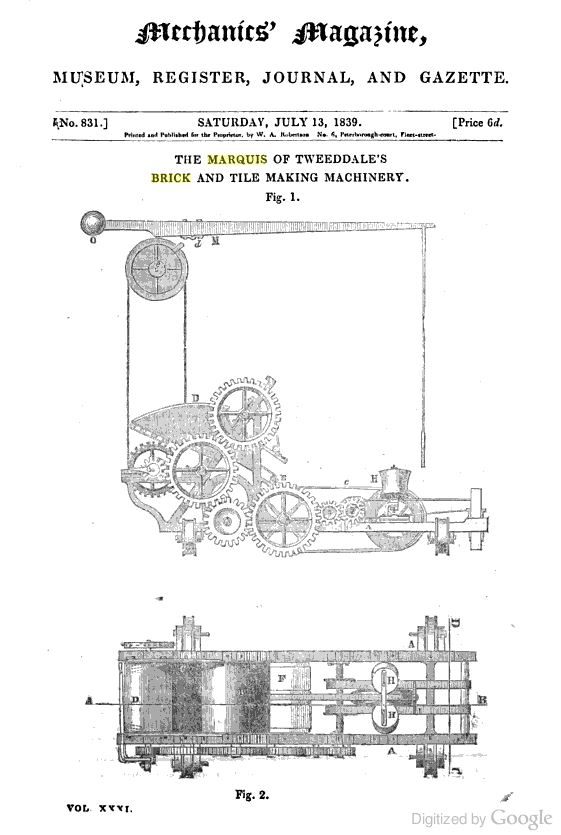 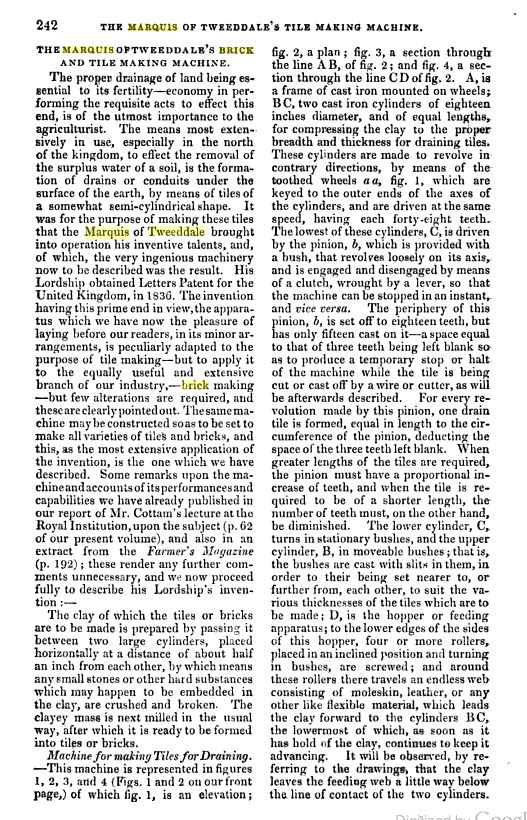 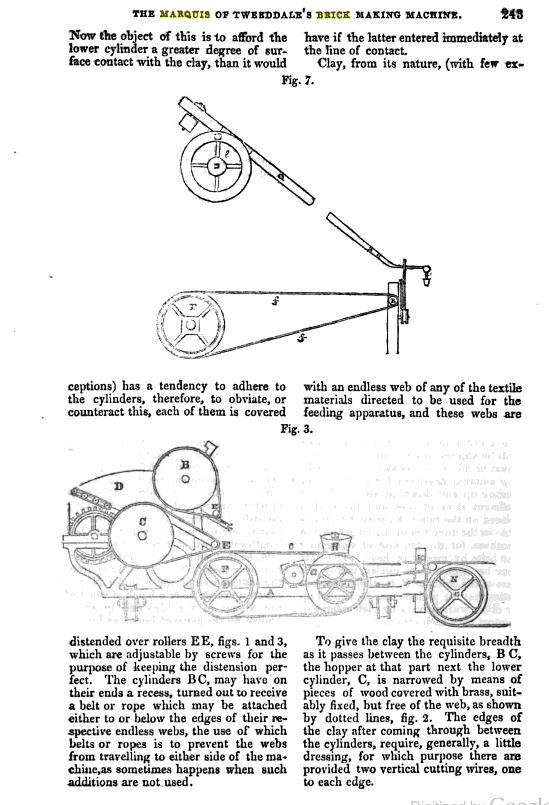 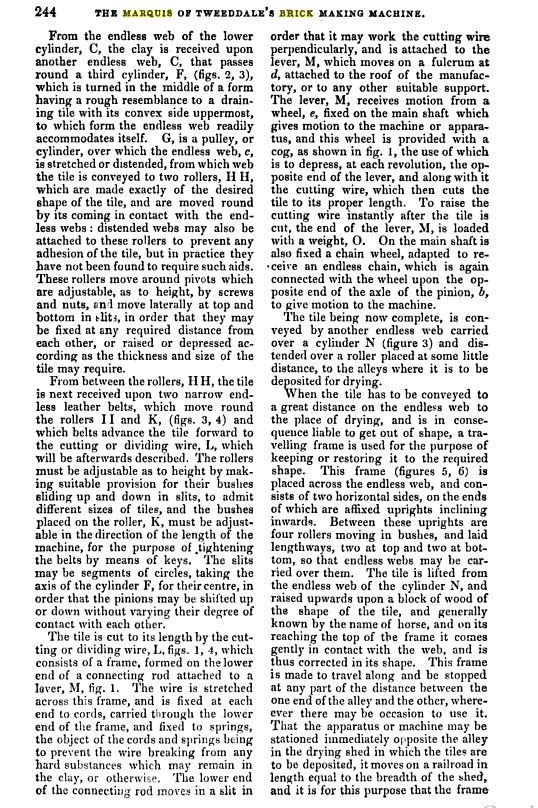 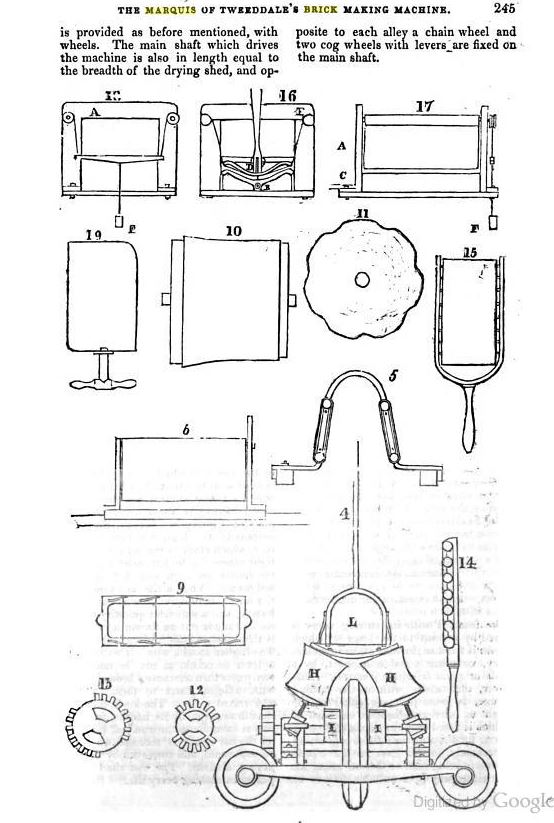 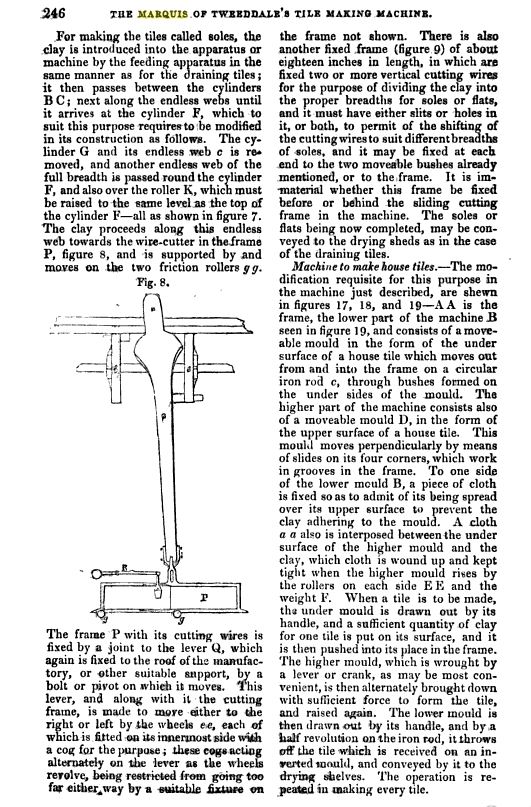 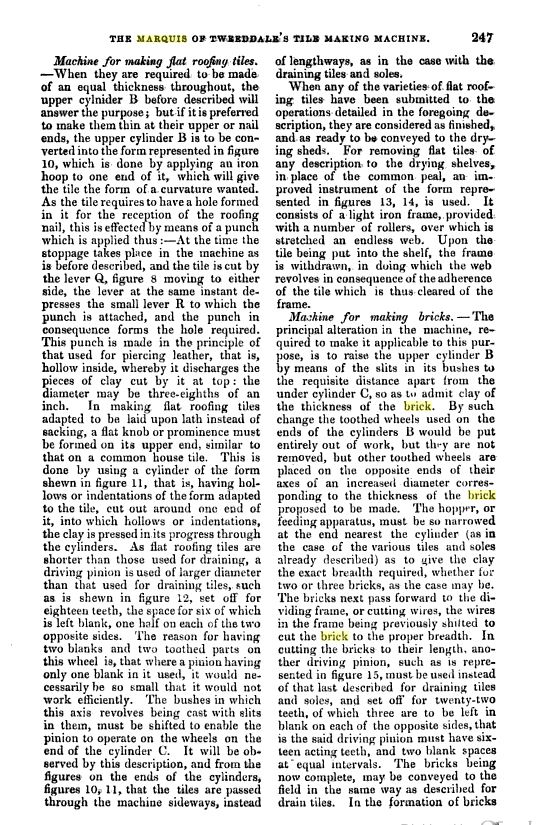 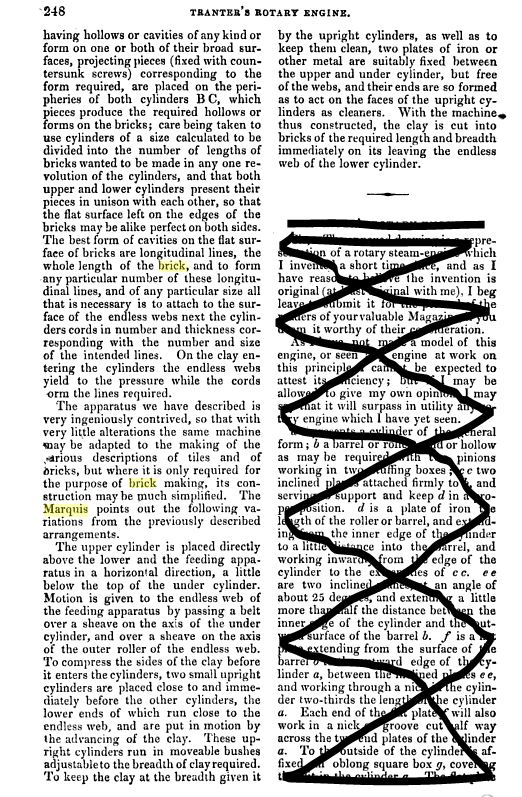 Below – 31/07/1839 – Inverness Courier – Article on the positives of buying a Tweeddale tile making machine. 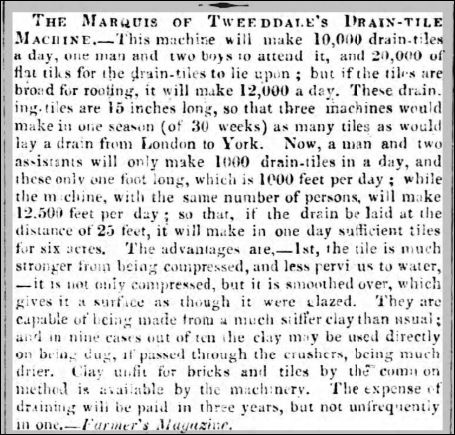 12/09/1839 – Falkirk Herald – Mr Cottam exhibited a model of a brick and tile making machine invented by the Marquis of Tweeddale by which it was stated that 30 bricks per minute or nearly 30,000 bricks a day could be made while a good moulder could only mould from 5000 to 8000 a day.

29/10/1839 – London Gazette – The yester or Marquis of Tweeddale’s patent for making tiles and bricks, notice is hereby given, that application is intended to be made to Parliament in the next session, for an Act to authorise the assignment to a company or companies, or to more than twelve persons, of certain letters patent granted to the Most Honourable George Marquis of Tweeddale, for his invention of an improved method of making tiles for draining, soles, house tiles, flat roofing tiles, and bricks and to enable such assignees to make, use, exercise, and vend the said invention, and to grant licences for making, using, exercising, or vending the same within the United Kingdom of Great Britain and Ireland, and Her Majesty’s colonies and plantations abroad. And it is intended by the said Act either to incorporate the said company or companies or to give them powers to sue and, be sued in the name of one or more of their directors or officers.  Swain, $tevens, and Co., 10, Whitehall, and 6 Frederick’s Place, Old Jewry, London.

Below  – 1841 – Describes a modification to Tweeddales machine by James White, 11 East Place Lambeth. 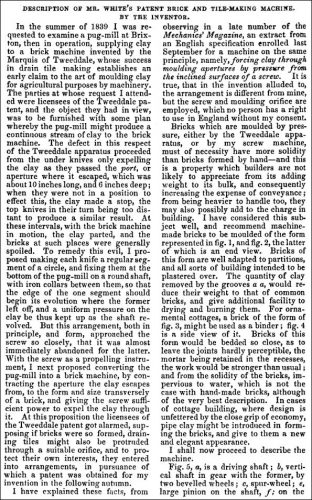 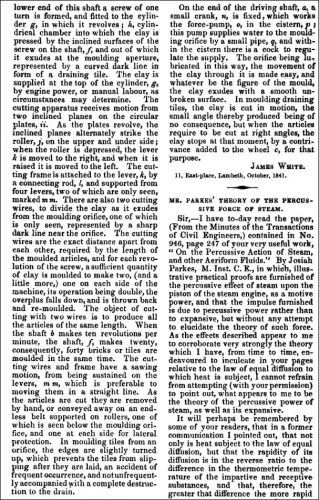 05/07/1842 – Northern Warder and General Advertiser for the Counties of Fife, Perth and Forfar. (pages 1 and 3)
Tweeddale company’s brick machines. It will be seen by an advertisement in another column that the above well-known company are now willing to grant a licence fro the use of the machine lately patented by them for making bricks.  The machine is well described in the advertisement,  It is small and portable; such as can be run along the brick-making flats with the greatest facility.  Two men and three boys, it is calculated, could make by means of it 15,000 a day by hand.  The leading peculiarity is that of having the bricks delivered on pallet boards which, we believe has never before been accomplished.  To brickmakers, this great improvement will at once be obvious.
Brick machines Tweeddale patent drain tile and brick company.  The subscriber begs leave to intimate to brick manufacturers in the North of England and Scotland, that the above-named company have recently patented a machine for making bricks; and have authorised him to grant licences for the use of the same.  Many attempts have been made to bring machinery to the aid of this branch of manufacture, but hitherto without success, although persons in the trade have shown every desire to encourage the accomplishment of so desirable an object.  The machine now submitted to public notice is extremely simple in its operation, portable, not susceptible of derangement, effects great saving of expense in the manufacture, and may be worked by any labourer, whether accustomed to the trade or not, producing 20 bricks per minute, delivered on pallet boards, which are afterwards conducted 20 or 30 feet (or further if necessary) by the same agency.  It is confidently recommended to persons engaged in the business, as an important and economical invention, enabling them to secure the certain performance of any amount of work in a season.  As the season ns now progressing, the subscriber would recommend parties wishing to carry on the brickworks with increased advantage to make immediate application for Machines., several of which are nearly ready, and one of which may in a short time be seen on the company’s tile works, at Ancroft, North Durham: another at Broomhill, near Felton, Northumberland.  The subscriber is also authorised to grant licences for the use of the drain tile machine, which has been recently reconstructed so as to admit of being easily wrought by and labour.  He will be happy to meet parties wishing to treat for machines at any pace they may appoint within 20 miles of Belford, upon a few days’ notice being given of an appointment. W. G. Green, Agent. Belford, Northumberland, June 28, 1842.
Below  – 09/11/1842 – The Scotsman – Tweeddale Patent Drain Tile and Brick Company. 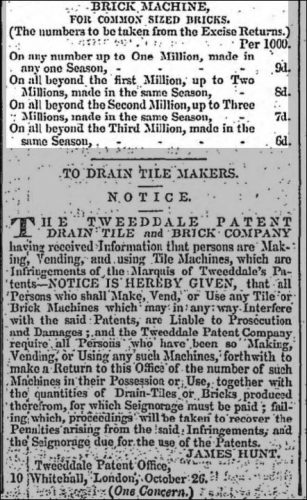 Below – 1843 – Advertisement – The Tweeddale Patent Brick and Tile Manufacturing Machine. 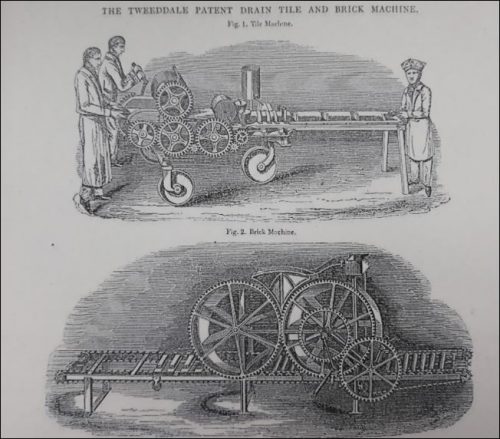 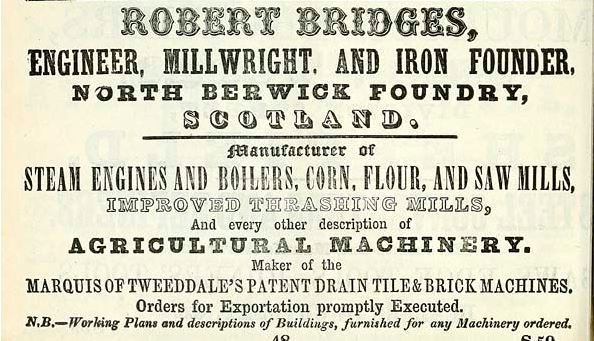 Many brick and tile works were instigated by improving estate owners – George Hay, 8th Marquis of Tweeddale, obtained a patent for innovative tilemaking equipment in 1839. In general, these rural works were small scale.

Marquis of Tweeddale is mentioned in Newton’s London Journal of Arts and Sciences dated 1843 – page 369 – 70.

Field Marshal George Hay, 8th Marquess of Tweeddale, KT, GCB (1 February 1787 – 10 October 1876) was a Scottish soldier and administrator. He served as a staff officer in the Peninsular War under Arthur Wellesley and was with Wellesley at the Second Battle of Porto when they crossed the Douro river and routed Marshal Soult’s French troops in Porto. Hay also saw action at the Battle of Bussaco and at the Battle of Vitoria. He later served in the War of 1812 and commanded the 100th Regiment of Foot at the Battle of Chippawa when he was taken prisoner of war. He went on to become Governor of Madras and, at the same time, Commander-in-Chief of the Madras Army, in which role he restored the discipline of the army, which had been allowed to fall into a relaxed state. 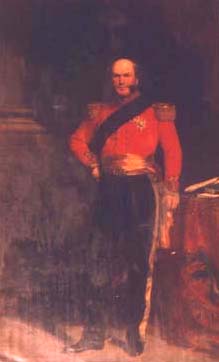 A correspondent in Australia reported that in 1836, the Marquis of Tweeddale invented the first significant extrusion machine, which ground and kneaded the clay, then pushed it out in a
continuous strip which could be cut off in sections, presumably by wire as in later models. The shape of the strip was determined by the die used, and it could produce not only bricks but also roof
and drainage tiles, both flat and curved. This was the sort of machine that would be useful to a large landowner, but by 1843 a smaller model was available which was suited for use by
unskilled labour on a private estate and produced fifteen bricks a minute. In 1838, Tweeddale obtained a further patent ‘to extend to the colonies only’, and it appears that the machines were being made by London engineers and iron founders Cottam & Hallen, who in 1839 were advertising brick and tile machines in books aimed at emigrants to South Australia. Tweeddale’s machines seem to have been more useful to private landowners than to commercial brickmakers.
However, he was not alone and it appears from a later account that at about the same time a man with the surname Murray, who was the manager of the Garnkirk Coal Company, invented a machine in which the clay was pugged and then extruded at the bottom in a form which could be slid off to make tiles. A number of later machines similarly combined pugging and extrusion, and it was predicted in the 1850s that this approach would supersede all others in the larger brickyards. Source
Tagged with: Brick machine makers, Garnkirk, Marquis of Tweeddale