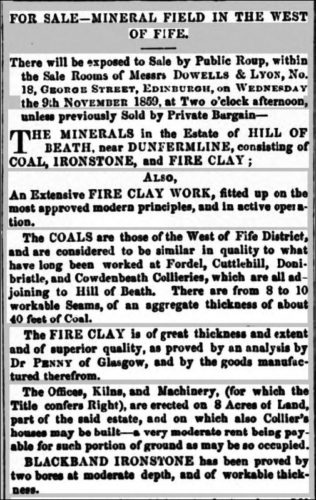 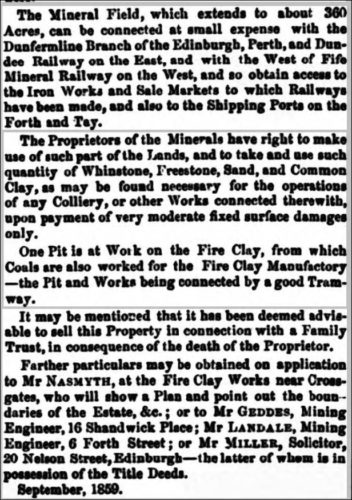 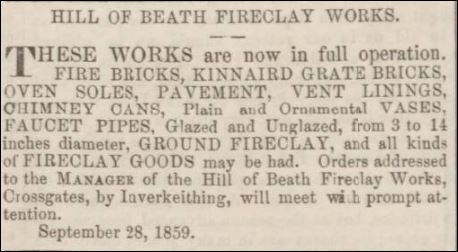 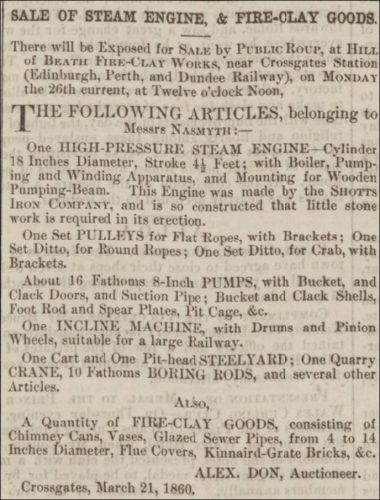 29/03/1867 – Dundee Courier – Accident. A girl named Mary Brown, while working at the Hill of Beath Brickwork, got her right leg entangled among the machinery, and was so much bruised that Dr Mungall, who attended her, got her removed the Infirmary at Edinburgh.

06/10/1869 – Dunfermline Press – Hill of Beath Fireclay Works. These works are now in full operation. Fire bricks, Kinnaid grate bricks, oven soles, pavement, vent linings, chimney cans, plain and ornamental vases, faucet pipes, glazed and unglazed, from 3 to 14 inches in diameter, ground fireclay and all kinds of fireclay goods may be had. Orders addressed to the manager of the Hill of Beath Fireclay Works, Crossgates by Inverkeithing will meet prompt attention. 05/10/1859.

13/10/1869 – North British Agriculturist – Serious accident. At Hill of Beath Brickwork, near Crossgates, on Thursday afternoon, two men, named William Low and James Campbell, were engaged in taking away the wooden props from beneath the arch of a new brick kiln, when the mass gave way and fell upon them. Low was in a stooping position at the time, and the bricks struck him on the back of the head, which bent his body forward and doubled him up. He had his back-bone dislocated, his left leg much bruised, and the whole body severely injured. Campbell was not so much hurt; some of his ribs on the right side were fractured, his right arm bruised, and he was cut on the back of the head. The arch was considered quite safe before removing the props. The men were conveyed home and attended to by Dr Mungall, who pronounced their injuries not to be dangerous.

06/11/1869 – Dundee Courier – Pit accident – On Wednesday afternoon Thomas Campbell and Charles Barclay, miners, met with an accident at the Minister’s Pit, Hill of Beath Colliery. They were at work cutting out fire clay, when the mass of clay came away and buried Barclay underneath it, putting out both their lamps, and leaving them in darkness. Campbell was standing more to the side and was not much hurt. He got hold of a lucifer match, lighted the lamps, and then dug out his comrade, Barclay, who was much hurt internally and had his hand severely smashed. Dr Morris was got as soon possible and attended to each.

10/12/1870 – Wrexham Guardian – About noon on Monday the boiler of the engine used at the Hill of Beath Brick and Tile Works, Dunfermline, belonging to Mr Ord Adams, exploded, completely destroying its shed, the engine, and several neighbouring buildings A large piece of the boiler, measuring about five feet long, was hurled a distance of several hundred yards, and alighted in an adjoining field, where it sank to the depth of two feet in the soil. The office of the works was much injured, and the chair usually occupied by Mr Adams entirely destroyed. No personal injury was sustained by anyone.

1871 – Census  – James Adams appears to be in charge of the fireclay works. 23/12/1871 – Fife Free Press – Proof was before Lord Gilford on Tuesday, in action at the instance of John Ross, writer, Dunfermline, the judicial factor of an estate named Hill of Beath, Fifeshire, against Mr Ord Adams, concluding for £3750, on the ground, as stated by the pursuer, among other things, that the defender is not entitled to use a portion of ground, being part of said estate, upon which has erected brickworks and other buildings, for any purpose but the erection of colliers and servants houses, in terms of a disposition. The pursuer further claims a decision in his favour in the respect that the defender is, as alleges, bound by an agreement to arrange with him to submit the matter of dispute to arbitration. The defender, on the footing that he had the authority to occupy the ground as he has done, claims absolvitor. He also states that he is at present paying rent and a half for the ground in respect of that privilege. The proof in the case was conducted before Lord Gifford Tuesday, and parties were appointed to be heard yesterday.

17/01/1874 – Fife Free Press – New brickworks – The Fife Coal Company (Limited) have discovered an excellent seam of clay, very suitable for brick making, in a field in close proximity to their works at Kelty (Blairadam). Excavations are going preparatory to erecting a brickwork at the spot. This will add another industry, facilitate the extension of the village by providing a supply of building materials at hand. (Note – SBH – I am uncertain which works this information relates to in respect of the new brickworks. I have added it here meantime to ensure it is recorded.) 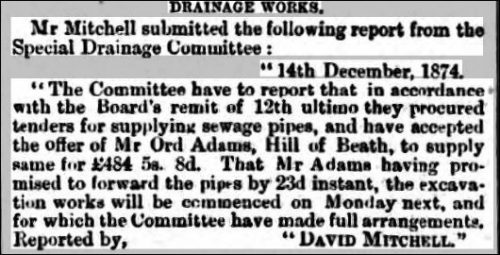 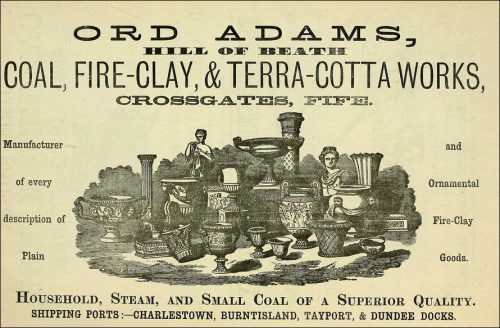 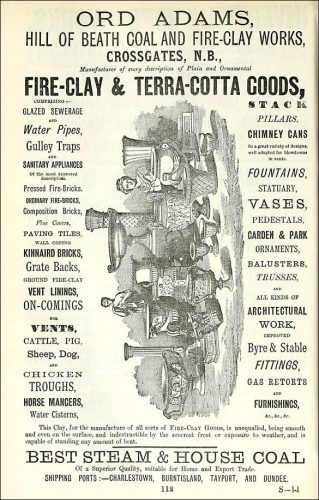 30/10/1878 – The Scotsman – Outer house (before Lord Curriehill) The Earl of Murray v Ord Adam. The Lord Ordinary today closed the record in this case and sent it to the Procedure Roll. The purpose of the action is to have it found and declared that the defender a coalmaster and brick and tile manufacturer at Hill of Beath, in the parish of Aberdour, is, as assignee of a tack entered into between the late Earl’s factor and Alexander Nesmith, residing in Bucklyvie, bound to pay, in addition to the fixed annual tack duty, a wayleave of a halfpenny for each quantity of 22 1/2 cwts of coal, ironstone, or other minerals, which may be conveyed along the siding or railway constructed upon the-ground leased. The summons also concludes for a count and reckoning in regards to the amount of wayleave, which the Earl claims. The defender maintains that by the terms of the tack there is no provision for payment of wayleave upon fireclay goods manufactured at his works and that as a tenant he is entitled to use his siding for the conveyance of such goods without paying any wayleave therefor.

21/04/1882 – The Scotsman – Dunfermline – Death of Mr Ord Adams. Ord Adams of Echobank, Inverkeithing died at his residence early yesterday morning. He was the manager of Evonbanks Colliery, belonging to the Duke of Hamilton for 30 years. Afterwards, he obtained a lease of the colliery on his own account. In 1859 he came to Fife and leased the Hill of Beath coalfields, which he made one of the most productive and extensive collieries in Fifeshire. In addition to his coal work, he was also a large brick and tile manufacturer. Mr Adams, who was 79 years of age, was a Liberal in politics, and a dissenter in religion. 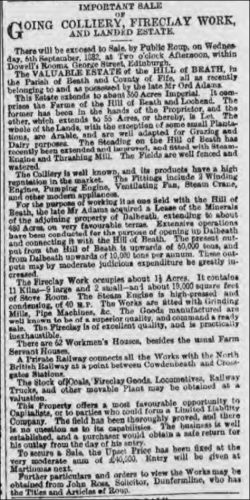 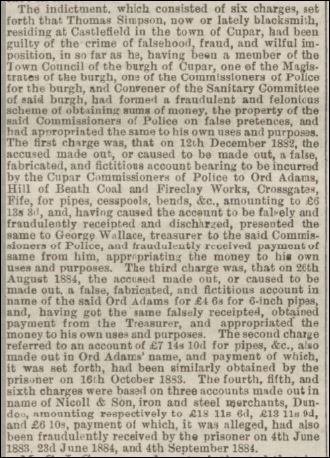 15/05/1886 – Fifeshire Advertiser – Arrival of large steam boilers – For the last few days this unusually quiet place has been elicited by the arrival day after day of four monster steam boilers which are intended for the new works of Ord Adams, Esq. The boilers are each 30 feet long, by 7 1/2 feet in diameter, of the Lancashire type, and are made of Siemen Martin steel, and are to work daily at 80 lbs per square inch. They possess all the latest improvements for safety, durability, and economy, and are an excellent specimen of high-class workmanship. They from the well-known firm, Messrs Wm. Wilson Co., Lilybank Boiler Works, Glasgow.

26/02/1889 – Dundee Advertiser – The estate of Hill of Beath has been purchased from Mr David Adams by Mr Charles Carlow, managing partner of the Fife Coal Company for £60,000. The purchase includes the lands, minerals, collieries and fire clay works on the estate of Hill of Beith and the extensive new colliery which Mr Adams had fitted up, on the adjoining lands of Dalbeath (belonging to Mr L Dalgleish) with a few to open up the Dalbeath minerals. The fittings are the most extensive Fifeshire and a shaft has been sunk to admit one of four cages being worked at one and the same time. Coal has been struck in the pit and it is fully anticipated that after the seams are opened out the output of coals will be from 700 to 900 tons per day. Mr Carlow has already taken possession of the Hill of Beath Works and is carrying on operations under the old name “Ord Adams”

1892 – Dunfermline Journal – If there are some Rip Van Winkles in the Western District of Fifeshire who have been asleep during the last half-century and are anxious to have an idea of the great progress which has been made in mining since 1840, they could not do better than make a tour around the Fife Coal Company’s works at Hill of Beath. The late Mr Ord Adams began operating on a very extensive scale at Hill of Beath upwards of 30 years ago. The great engine pit he sunk on the eastern slope of the Hill of Beath was a big venture compared with many of the small pits and clay-mines opened up in many of the districts in Fife. In 1887 Mr David Adams, fully alive to the tendencies of the age, inaugurated the work of extending the colliery on a huge scale by contracting for sinking on the borders of the Hill of Beath and Dalbeath grounds, and the pit put down is undoubtedly the largest pit in Scotland. In 1889 the work passed into the hands of the Fife Coal Company. 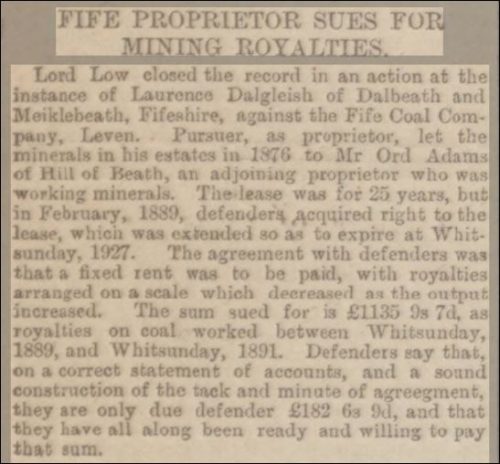 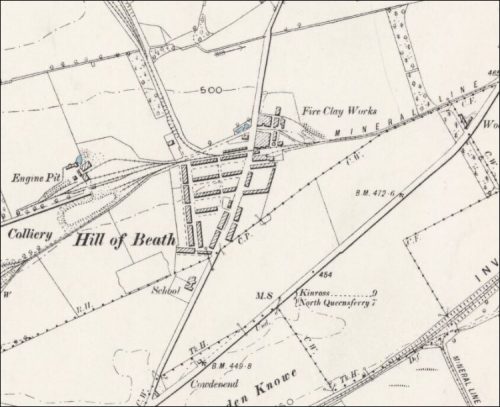 16/02/1901 – Dundee Evening Post – Article re a pit accident. Reference to … With all speed, Traynary hurried to the pit, which is little more than yards from the village houses, all, it may be remarked, neatly built of light-coloured brick made in Hill of Beath

02/04/1902 – Dundee Courier – Death of Fife coalmaster. The death is announced of Mr David Adams of Muircambus, in the East of Fife. Mr Adams, who was in his seventieth year, was the son of the late Mr Ord Adams who, forty years ago, purchased the estate of Hill of Beath, and commenced mining operations there. The Fife Coal Company subsequently acquired the colliery, and Mr David Adams took up residence at North Queensferry and afterwards purchased the estate of Muircambus. The deceased gentleman is survived by a widow and three children.

c. 1904 – The brickworks had been bought by the Fife Coal Company. Source Kenneth W Sanderson. 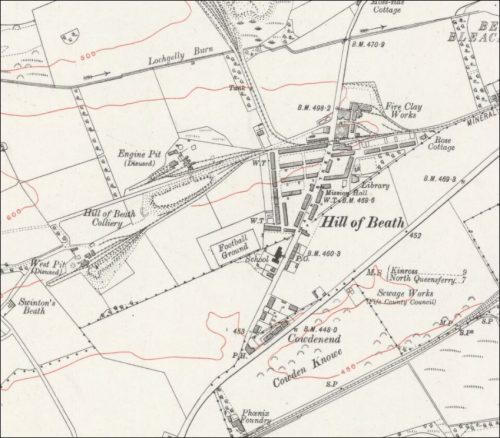 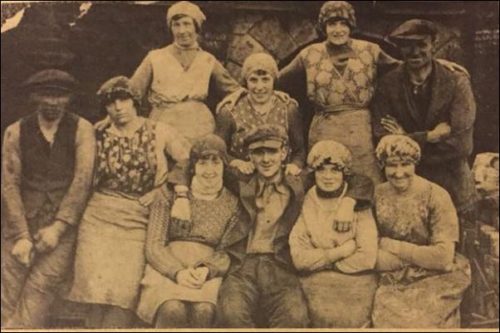 1922 – The Fife Coal Company Limited owned the brickworks at Hill of Beath, Blairadam and Bowhill. 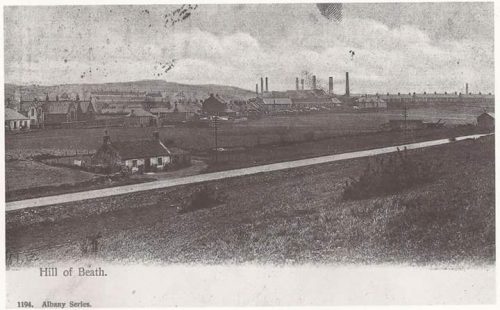 06/09/1934 – Dundee Courier – The Fife Coal Company displayed Fife manufactured bricks at an exhibition at British Industries House, Oxford Street, London. (Notes SBH – There is no reference to which exact brickworks were featured) 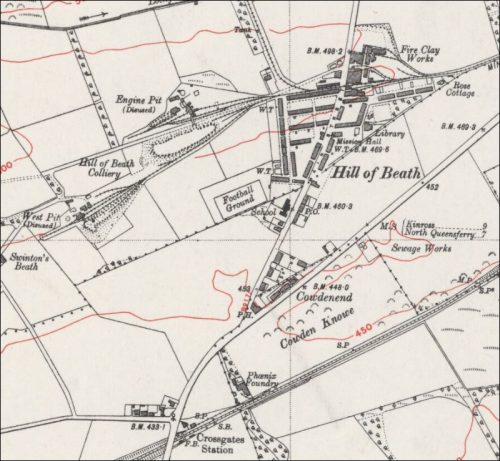 Below – A wonderful Hill of Beath press/stamp found by George Hunter on the site of the Hill Of Beath Brickworks. 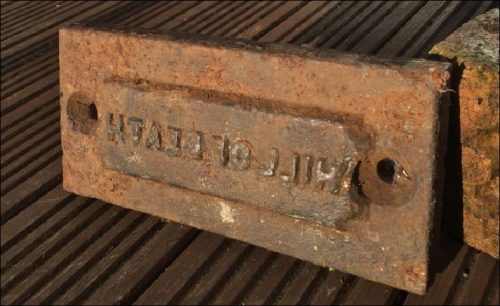