Sited close to the glassworks, and probably dates back to about 1750. An advertisement in the Stirling Journal of 20th July 1820 offers common brick at 30 shillings per thousand and firebricks at 70 shillings per thousand. The firebricks are very superior having been fully proved in the strongest furnaces. It was managed by W & J Carmichael in 1882. Dollar main brickworks were also managed by W & J Carmichael in 1882 (Brickworks started) and the adjacent Dollarfield Brickworks was managed by Alexander Brodie. Both were situated at Lower Mains, Dollar. – Unknown source

Unknown date – Source Kenneth Sanderson – Dollarfield Brickworks (Managed by Alexander Brodie). Dollarfield and Dollarmains Brickworks were both started in 1882? and were adjacent to each other at Lower Mains, Dollar.

1841 – Devon Valley Tribune (30/04/1901) – Dollar in 1841 … The increasing prosperity of the bleachfield, a new coal-work on the south of the Devon now in active operation and the two new tileworks have created a great demand for labourers, who, with their families, have lately settled in Dollar … 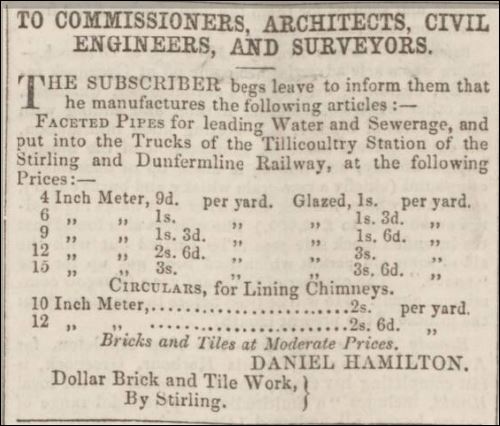 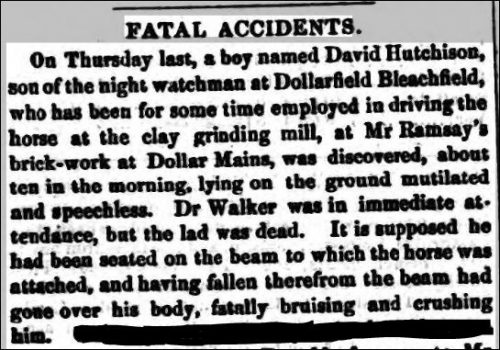 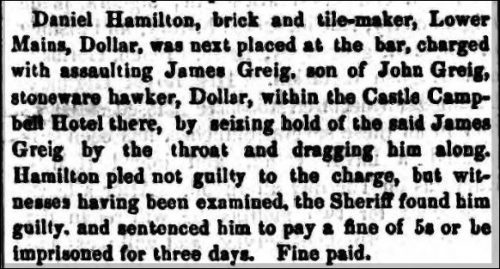 Below – 12/10/1861 – Alloa Advertiser – Brickworks at Dollarmains to let. Presently possessed by Daniel Hamilton. 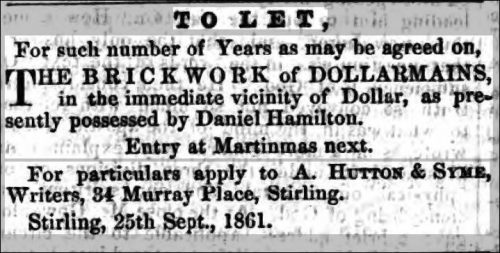 Below – 1861 – 1862 – Dollarfield and Dollarmains Brickworks side by side. (Dollarfield may be the works on the right as Dollarfield Farm is just slightly East and South of  the location but this is uncertain) 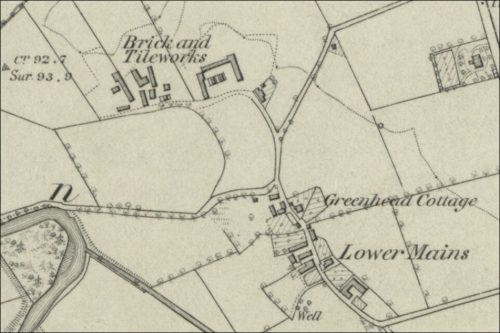 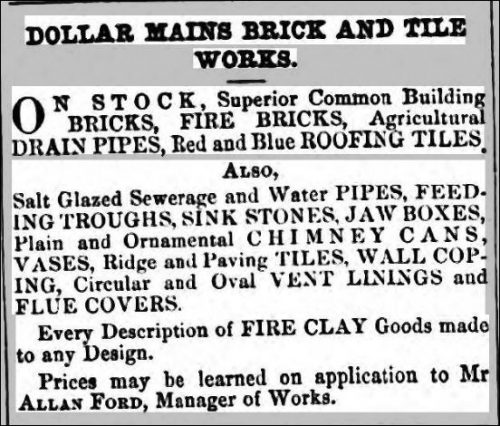 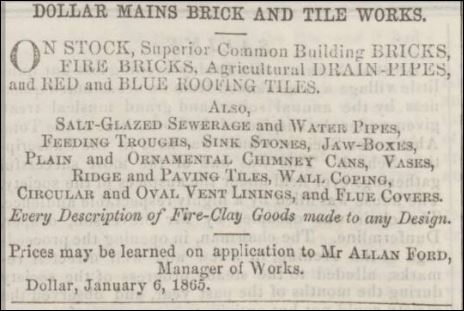 01/04/1871 – Alloa Advertiser – To let at Dollar. A brick and tile work for such term of years as may be agreed upon. For particulars apply to Mr Henry Syme, Builder, Dollar. (Note – SBH – Is this Dollarmains or Dollarfield).

Below – 02/07/1881 – Alloa Advertiser – Property at Lower Mains of Dollar for sale … there is a valuable brickfield on the ground. The present rental including a feu payment amounts to £63 17s or thereby and it could be largely increased. (Note – SBH – is this reference to both the Dollarfield and Dollarmains Brickworks?) 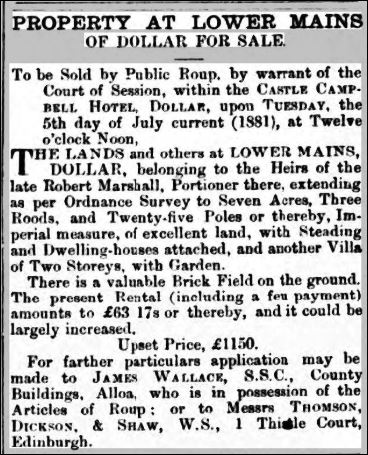 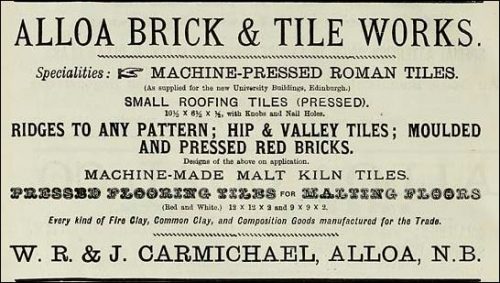 Below – 12/05/1888 – Alloa Advertiser – The Glasgow exhibition – Messrs W.R & J Carmichael, Alloa and Dollar Brick and Tile Works, have stand 866, court 5, class 3, where they have erected two pillars of fine red facing bricks, intermixed with enamelled bricks of various colours.  They are covered with round and square roofs respectively and slated with small red tiles of various designs to show their manufacture in that kind of goods, of which, we understand, they are the only makers in Scotland.  They show in the terracotta department a variety of ridge tiles, finials, and terminals for roofs of houses, which are of a fine bright red colour and have a pleasing appearance.  A number of terracotta chimney cans of new and superior designs are also exhibited along with various kinds of air bricks, flower boxes, seed pans, brackets, busts, and hanging flower pots covered with raised roses and other flower imitations.  In white and yellow enamelled ware, they have a good show of superior glazed sinks, washtubs, troughs, traps, rustic garden edging, bricks, &c. 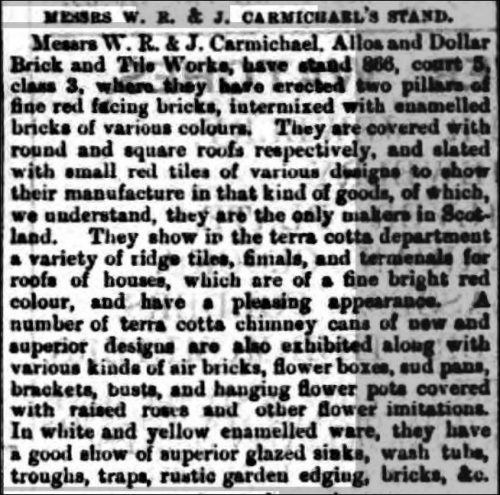 Below – 1899 – Old Claypits are marked and presumably mark the sites of the ex Dollarfield and Dollarmains Brickworks. 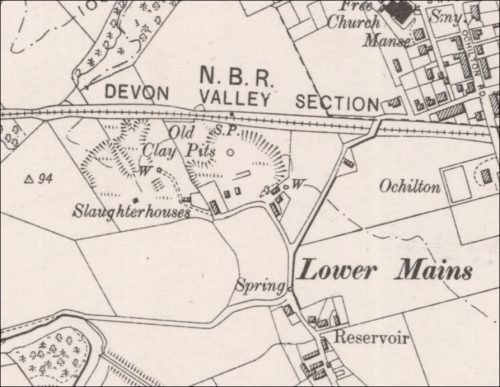 (The following information is for research to determine which brickworks it is relevant to – 23/02/1871 – Fife Herald  – Scotch Bankrupts – George Pitkethly Smith, brick and tile maker, residing at Windsow Cottage, Dollar).

(The following information is for research to determine which brickworks it is relevant to – 21/12/1865 – Dundee Courier and 26/05/1866 – Preston Herald – Murder and Robbery of Alexander McEwan near Blairingone. He was shot in the head. Joseph Bell was subsequently arrested in Devonside Tillicoultry and charged with the murder. He was hanged at Perth Prison in May 1866. Bell worked at the Dollar Brickworks).