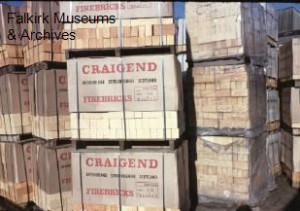 Craigend Brickworks Ltd was established in 1938 on the site of the drift mine at Craigend, Falkirk, leased to the company by Carron Co. The works closed in 1943 due to lack of demand for bricks but re-opened after the war. The name was changed to Craigend Refractories Ltd in February 1972 and the company was sold to Amalgamated Anthracite Holdings Ltd. In 1983 the Carbrook Mine and Craigend Works were closed and the remaining assets and trade names sold to the Burn Fireclay Co of Morpeth.

William Wilson founded the works in 1937 on the site of Whiterigg and Craigend Collieries (Carron Company). He also opened the Carbrook Mine to supply the brickworks with fireclay.

In 1964 the pit blae supply was exhausted and the works concentrated on making refractories. In 1982 the Carbrook Mine only worked in response to demand from the Craigend works. Carbrook was Scotlands last fireclay mine and it closed in Oct 1982. The clay was transported from the Carbrook Mines by lorries hired from William Grants. Originally 100 people were employed by the mine.  1979 – 20 people worked the mine and delivered 200 tons of clay per day. 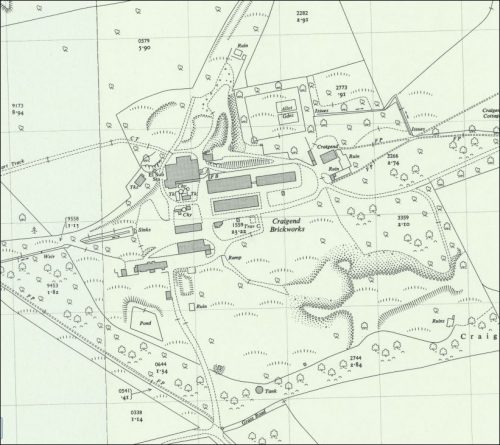 16/06/1951 – Falkirk Herald – Craigend Brickworks are referenced after staff sent their condolences to a fellow worker following a family death. 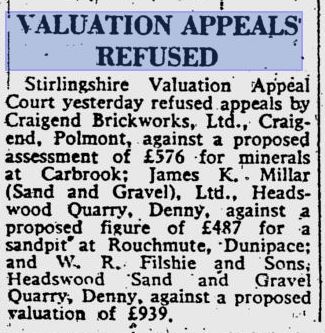 12/01/1959 – The Glasgow Herald – Canadians buy Scottish bricks  –  Falkirk, Scotland.  A concrete demonstration of how concentrated attention to developing exports to Canada, kept an industry going at full capacity while its competitors, dependant on the home market, were laying off men and closing down, was brought to my attention when I paid a visit to this district of Scotland.  Primary object if the visit was to renew acquaintance-ship with a new friend I had met while attending the Dollar Export Council Conference in Eastbourne early in December.  He was William H Wilson, owner of the Craigend Brickworks at Avonbridge, near Falkirk.

At Eastbourne, he had told me something of his success in developing export business in Canada by going out there personally and making contacts with construction companies to which he could sell the major product of his plant – a high-quality type of firebrick.  He urged me at the first opportunity to come to Scotland and visit his brickworks, and that is exactly what we have been doing.

As we visited the mine from which comes the clay that is the raw material for his industry, he told how his exports to Canada had kept his men in employment. He had visited Canada in the early summer of 1958,  seeking new business to keep his works going, because there was a definite decline in the domestic market for his produce.  Towards the end of the summer, he was faced with closing down operations because he had a large stockpile of clay and of completed bricks.  Other brickworks were closing down.

Then came a rush of orders for Canada, enough to keep his plant and its workers busy until well on into 1960.  The clay mine had to be put into full operation to meet these Canadian demands, and there has been full employment at Craigend Brickworks.

William Wilson founded the Company in 1937 but the WW2 caused it to close. In 1982 it was owned by Amalgamated Anthracite Holdings – AAH. Mr Stewart and Mr Forbes Hendry provided capital for the works to be built on the site of the Craigend Colliery which produced coking coal for the Carron Company. The enterprise was a private limited company and consisted of 5 shareholders and Mr Wilson who became MD.  The firm managed to open for a few months in 1940 but it did not begin production until after the war. During the 1960’s Craigend Brickworks sold out to a Welsh Company and became known as Craigend Refractories. In 1964 the pit bing required to make common bricks became and the works began to manufacture firebricks with clay from the Carbrook Mine in Torwood. Bauxite was obtained from New Guinea. Some bricks were specifically produced for local firms eg fire grates for Smith and Wellstood Bonnybridge.

c. 1964 – The 1985 publication ‘A survey of Scottish brickmarks’ suggests that Craigend Refractories Ltd were the owners.

c. 1979 – 1983 – The 1985 publication ‘A survey of Scottish brickmarks’ suggests that Amalgamated Anthracite Holdings were the owners.

Below –1982 – Photograph of the Works showing packed bricks ready for transport. The photo was taken by William McCall, Maddiston. 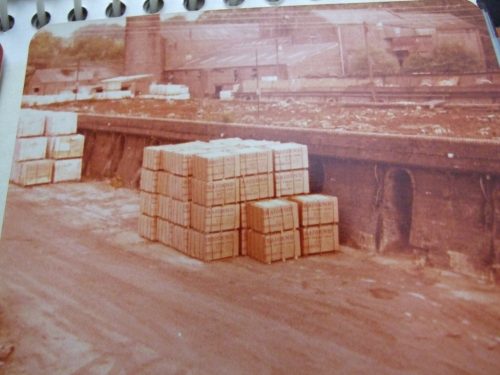 6/11/1985 – Edinburgh Gazette – Notice is hereby given, in accordance with Section 36(1 )(a) of the Control of Pollution Act 1974, that an application has been made to the Forth River Purification Board by Caledon Coal Company Ltd, Craigend Brickworks, Standburn by Falkirk, for consent to discharge unspecified quantities per day of treated surface water and groundwater to a tributary of the River Avon at Grid Reference NS 9078 7370 from Bogo Opencast Site, Avonbridge.

Eagle 50 – 50% alumina – this brick is similar to our high-grade quality firebrick but has higher refractories and greater resistance to slag attack.

Eagle 60 – 60-62% alumina – this brick because of its high alumina content and good thermal resistance is very suited for cement and lime kiln applications. 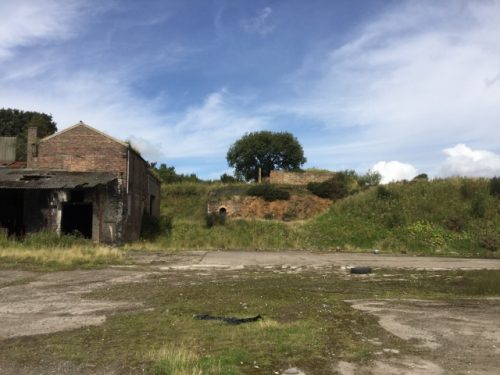 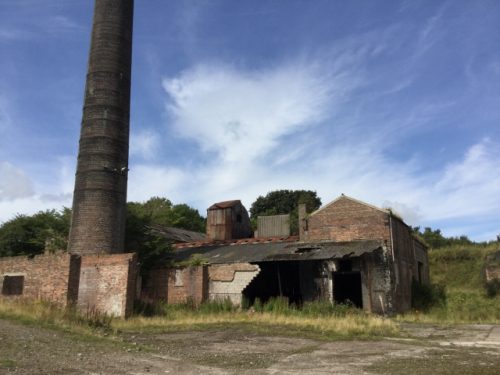 Below – Date unknown, but believed to be pre-1970, aerial photo of the Craigend Refractories site. Kindly forwarded by Bobby Carty aka Gerry from Rumford. 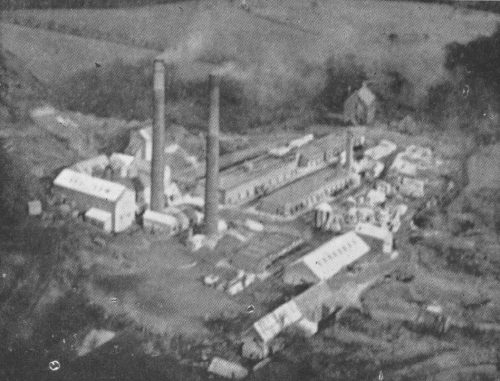 Below – The Scottish Industrial Archaeology Survey published a report in 1985 entitled ” A survey of Scottish brickmarks. During the compilation of this report in which the survey officers visited working and derelict brickworks sites, many items of interest were donated or found. Many of these items were thereafter donated to the National Museum Scotland. The item below is one of these items. A brass stamping plate marked ‘Falcon A’ 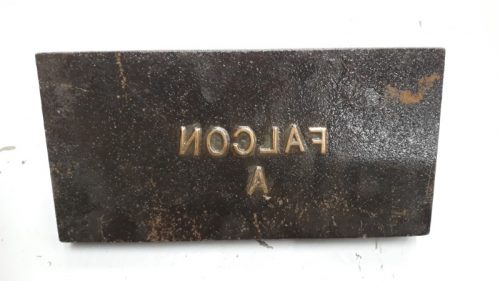