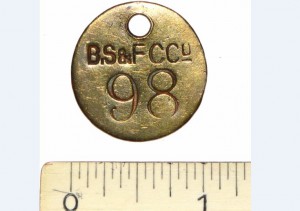 Bonnybridge Silica and Fire Clay Co – Originated with partnership in 1874 of Azariah Griffiths of Sheffield and Alexander Whyte, flesher, of Alma St, Falkirk. Griffiths became a sole partner in 1887. It is believed to have been one of the first companies to discover and work the seams of fireclay and ganister at Bonnybridge. The company was incorporated as Bonnybridge Silica & Fireclay Co in 1906. In 1936, merged with Calder Fireclay Co (founded in 1880) which ran Armadale Brickworks, and the combined company then opened Chapelhall Works. Torwood Mine opened in the 1940s and company took over Aitkendean Mine, Carrington, Midlothian in the 1960s although this closed shortly afterwards. In 1961 (Note – SBH – this may have actually been in 1969?), the company was bought from the family and re-financed by Scotcros Ltd and re-named Bonnybridge Refractories Ltd. The company was sold to Hepworth Ceramic Holdings in 1972. Bonnybridge Works closed in 1973 and Chapelhall Works closed in 1980. Bonnybridge Silica & Fireclay Co, operate as manufacturers of bricks and refractory ceramic products. The company’s registered office is in Linlithgow, West Lothian. Bonnybridge Silica & Fireclay Co was incorporated in 1969 with the registration number SC047123.

c. 11/1882 – John Gilchrist Stein starts work as a salesman at the Bonnybridge Silica and Fireclay Co Ltd. He was paid 27s 6d per week. 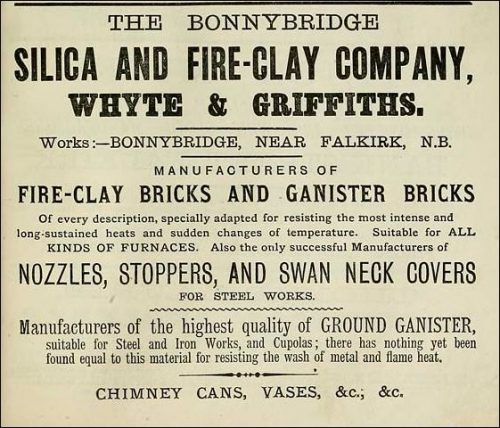 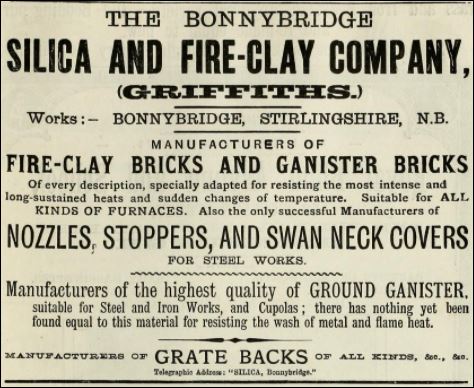 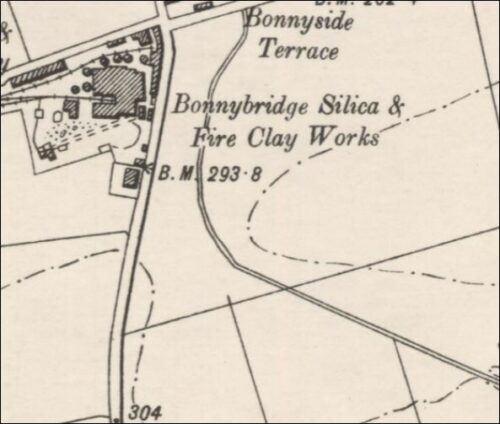 21/01/1899 – Falkirk Herald – … during the past year, and have been very busy.  The same may be said of the Bonnybridge Silica and Fire Clay Works where the electric light has been fitted up during the year … 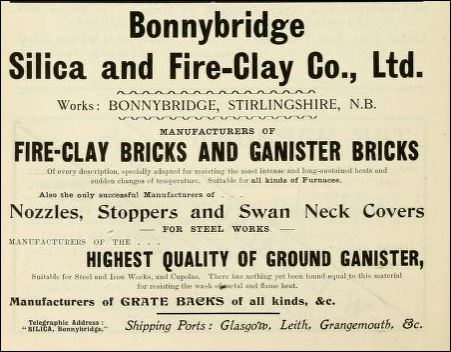 24/09/1909 – Linlithgowshire Gazette – New Management at Muirs Brickworks –  Hugh Goldie, who has managed the brickworks and coalmine of Messrs Robert Muir and Ltd., for past three years, having accepted an engagement of similar nature Bonnybridge, left on Wednesday of last week. In order to fill the vacant position. Messrs Muir and  Co., who own Armadale. Barbauchlaw, and Boghead Brick and Pipe Works, and Coal Mine have had to engage a  manager for the brick and pipe works, and also a manager for the mine. Mr James Gillespie,  late of Turner and Co., Portobello, took up the duties of managing the brick and pipework on Tuesday, and Mr Heaps, from Blackbraes, a young certificated mine manager, has taken over the management the mine.

20/05/1910  – Dundee Evening Telegraph – Death of a Falkirk ex provost. The death has taken place at the Hollies, Falkirk of ex Provost Griffiths, fire brick manufacturer, Bonnybridge. Deceased who was about 70 years of age was a native of Monmouthshire. A good many years ago he started the making of silica and gannister bricks, the first industry of its kind in Scotland and had large works in Bonnybridge. For 12 years he was a member of the Falkirk Town Council and was for a period Provost. He was also a J.P and Honorary Sheriff Substitute. 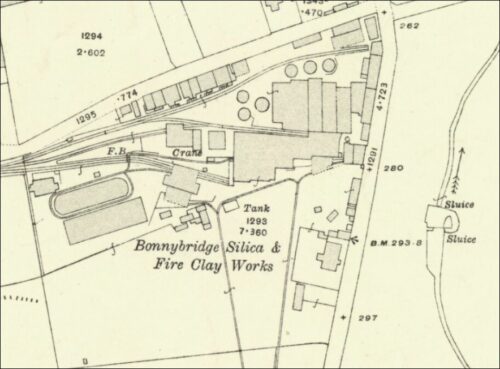 06/07/1918 – Falkirk Herald – Death of Mr Hugh Goldie, High Bonnybridge – The death took place on Wednesday afternoon of Mr Hugh Goldie, manager, Bonnybridge Silica and Fireclay Co Ltd. Deceased who was in his 46th year, occupied a prominent place in the Scottish brickmaking industry. A native of Kilmarnock, he came to Bonnybridge 9 years ago. He leaves a widow and 4 of a family to whom the sympathy of the community is extended.

04/09/1936 – Motherwell Times  – Brickwork for Chapelhall – Chapelhall village is to have industry, the first for ten years. A new industry is the manufacture of fireclay bricks. Bonnybridge Silica and Fireclay Company are building a factory. Constructional work is being pushed ahead and it is hoped to begin production towards the end of October. Work will be given to about 200 men. The latest type of machinery will be installed in the factory. Bricks produced will be for home use and export.

18/04/1942 – Falkirk Herald – Injury to works chemist – An unfortunate industrial accident occurred at High Bonnybridge last Monday, resulting in serious injury being sustained by Mr Shorter, the chemist employed by Bonnybridge Silica and Fireclay Company, Ltd. In furtherment of his research work, Mr Shorter had descended the clay pit adjacent to the works. Having completed his task, he was proceeding to the shaft on a hutch, when he came into violent contact with a low roof of which he was not aware. He sustained two fractures of the upper limbs and severe bruising that necessitated his removal to Falkirk and District Royal Infirmary. 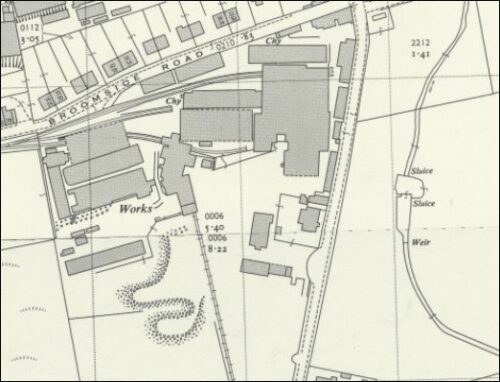 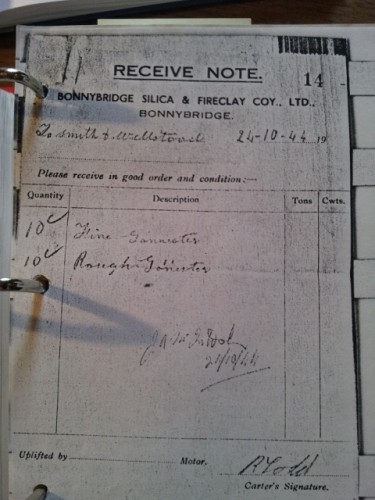 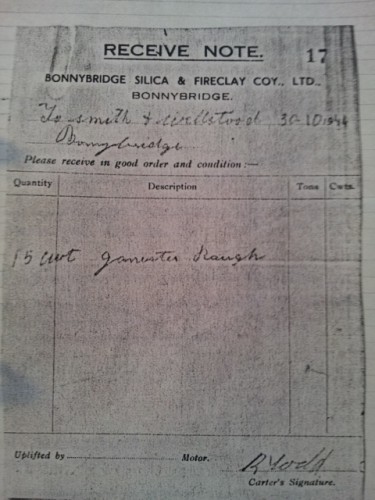 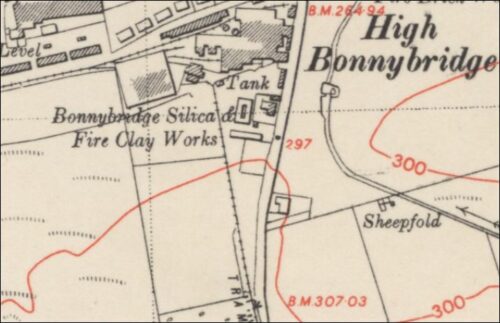 November 1969 – A paper is written by Norcros Limited on behalf of Scotros Limited entitled – Bonnybridge Silica and Fireclay Company Limited – Report on economic effectiveness.  In this very interesting document, it details further Bonnybridge brands eg Heat store – bricks for storage heaters, Duoss a silicon carbide brick and an engineering brick carrying the tradename Millstone. It also refers to the Bonnybridge plant at this time having 3 Belgian kilns and 2 zig-zag kilns and the Chapelhall plant having a tunnel kiln.

May 1970 – Bonnybridge Refractories Ltd., (Scotcros group) has made C. J. Sunderland the market development manager.  He was with the company about 10 years previously as a sales representative. Clay Worker Magazine  May 1970.

June 1970 – Bonnybridge Refractories Ltd (Scotcros group) has made Michael R. Hooper development and progress engineering manager.  One of his duties will include phasing in and planning a new plant to be bought soon as part of an expansion programme.  He was formerly with Samuel Wilkinson & Sons Ltd as works manager and with Interkiln Engineering Inc. as a project engineer. Clay Worker Magazine  June 1970.

1972 – The plant was bought by Hepworth Ceramic Holdings.

Torwood Mine, Dunipace originally supplied fireclay to Craigend Refractories at Avonbridge but the latter sold the mine to Bonnybridge Silica and Fireclay Company who continued to work it until it closed. The worked-out clay was hauled to the surface by electronically driven winding gear.  In 1978 the mine had 25 employees. Remains of brick structures on the site show they were constructed with Bonnybridge Brand and Drangaini? bricks – Source Falkirk Museum and Archives. 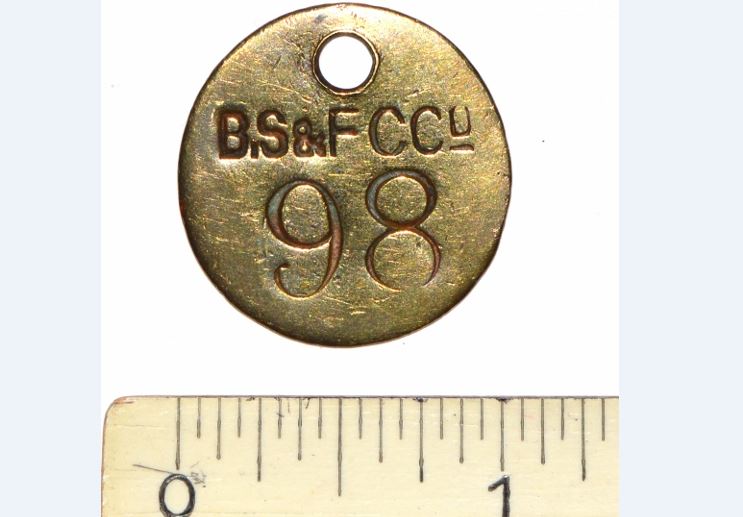 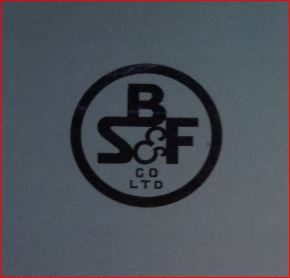 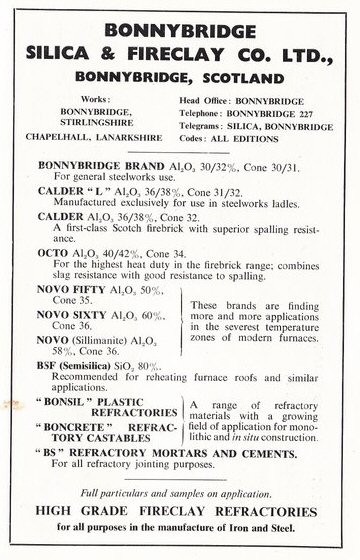 Bonnybridge Brand – for general steel use.

Calder L – Manufactured exclusively for use in steelworks ladles.

Novo Fifty – These are finding themselves more applications in the severest temperatures zones of modern furnaces.

Novo Sixty – These are finding themselves more applications in the severest temperatures zones of modern furnaces.

Novo Sillimanite  – These are finding themselves more applications in the severest temperatures zones of modern furnaces.

Bonsil Plastic Refractories  – growing field of application for monolithic and in situ construction.