Est prior to 1867 and ceased 1964. The works had a 12 chamber Hoffman Kiln. A tramway approx 250m to the south of the site led to the fire clay mine. Glen Yards was the Trade name

In 1867 the site was operated by Scott and Walker. By the beginning of the 20th century, the works were believed to have been owned by a German, a Mr Millar, who was imprisoned during WW1. The firm was then taken over by Mr Millar’s son-in-law, a Mr Singen. By the late 1920s, the yard was under the control of Mr James Anderson and it remained in his control until the late 1930s when Mr J Anderson died. The Company was finally closed in 1967. The Archives also have another record which states they closed in the 1950s. Source – Falkirk Museum and Archives.

Glenyards Fireclay Company Ltd, Greenhill, Bonnybridge. The company was incorporated in August 1899 with a capital of £4000. It took over from David Graham the lease of the Glenyard minerals dated 22/02/1989, granted by Miss Caroline Maxwell Muller and James Muirhead, acting for Miss Leonard Maxwell Muller, both of Glenyards. The lease, pits, plant and stoke in trade were valued at £2400 ad satisfied by 1,500 shares and £900 cash paid to David Graham who undertook to serve as Managing Director for five years. He lived with his brother, Peter Graham, at Clayknowes House. Other prominent shareholders were Robert Dobbie, iron founder of Larbert, Borthwick Watson of Ardfern, Falkirk and Andrew Hunter, solicitor of Falkirk. By 1903, another five young Grahams, John, Joseph, Anthony, Jennie and Agnes, all living at Clayknowes House, were shareholders. Peter Graham died in 1904 and David in 1913. The Company did not flourish and losses were made in most years and had mounted to £18,000 by 1915. A liquidator was appointed in 1918 and the works lay idle till 1922 when it was purchased by James Anderson & Co Ltd. James Anderson was a director of the London Company that had purchased the Dykehead Ganister and Fireclay Company Ltd and Bonnymuir Brickworks.  He then offered it to the Dykehead Company who turned it down after inspecting it. His resignation was accepted and he formed his own Company, James Anderson & Co Ltd. Source – Kenneth Sanderson states.

21/01/1899 – Falkirk Herald … A new work has been started during this year by Messrs Graham & Sons, Grahamston, the name of the firm being Glenyards Fire Clay Company …

02/09/1899 – Falkirk Herald – Greenhill – Accident at Glenyards Brickworks – On Wednesday forenoon, while Thomas Henderson, miner, Blackhill, was engaged removing some clay and earth, in order to make room for the building of some new stoves at Glenyards Brickworks, Greenhill about 5 tons of clay etc, fell on top of him and completely buried whereby he sustained a severe bruise and injury to his spine. He was examined by Dr Alexander, Denny who ordered his removal to the Glasgow Royal Infirmary.

20/01/1900 – Kilsyth Journal – Fatal Accident – A sad accident has occurred in the Glenyards Fireclay Works, Bonnybridge. A man named Samuel Connor, residing at Woodend Place, Bonnybridge was in the clay pit on Friday afternoon when he tested a large piece of freestone on the roof of his working place by tapping it with his pick in the usual manner. He was apparently satisfied with the security of the stone and turned to speak to a fellow workman, when, without the slightest warning the stone fell, crushing him under it and killing him almost instantaneously. Deceased leaves a widow and 5 of a family who reside at Glenboig, Lanarkshire and who were to have joined him in Bonnybridge in the course of the week.

13/02/1904 – Falkirk Herald – The Scotsman – Action against a fire clay company – An action has been raised in the Falkirk Small Debt Court at the instance of Carron Coy., against the Glenyards Fire-Clay Coy.  The pursuers sue for £2, in respect of labour in loading and unloading 30 tons of bricks and for crane dues.  It appears that the defenders dispatched from their works to Grangemouth a quantity of bricks in several waggons, for transit to London.  The address on the waggons was “Carron Company, for shipment to Ramsgate.”  On arriving at Grangemouth, the goods were taken possession of by the pursuers and loaded on one of their steamers.  Before the bricks had been shipped the pursuers received from the defenders a postcard stating that the bricks had been sent to the pursuers through an error on the part of the defenders and that they were intended for a steamer which they had chartered at Grangemouth.  On receipt of the postcard, the pursuers stopped the work of loading and proceeded to unload the bricks that had been shipped, and the sum sued for includes the cost of loading and unloading the bricks and the crane dues.  The defenders admit this but stated in defence that it is the custom for the consignor to send to the carrier a manifest or advice note containing instructions.  In the present insurance no manifest or defence note and no verbal instructions were given, and consequently, there was no contract between the parties, and no liability attached to the defenders.  The pursuers, while admitting the custom, state that there is no universal practice regarding the advance notes.  They, however, acknowledge that in all their previous dealings with the defender’s advice notes had been received.  After hearing the agents, Sheriff Bell took the case to avizandum.  Agents for the pursuers, Mr W. J. Gibson, of Messrs Gair & Gibson, solicitors; agents for the defenders, Mr Andrew Hunter, of Messrs Marshall & Hunter, solicitors.

20/02/1904 – Falkirk Herald – The action against a fire clay company – In the court on Wednesday, Sheriff Bell gave judgement in the action raised in the small debt court at the instance of the Carron Coy, against the Glenyards Fire Clay Coy for payment of £2 in respect of labour in loading and unloading 30 tons of bricks and for crane dues. The Sheriff granted a decree for the amount sued for. His Lordship remarked that the previous dealings between the parties were not sufficient to establish a custom of trade requiring a manifest to be sent to the shippers.
Below – 18/05/1912 – Falkirk Herald – Compensation claim re death of William Hawthorn at the Glenyards Fireclay Works. 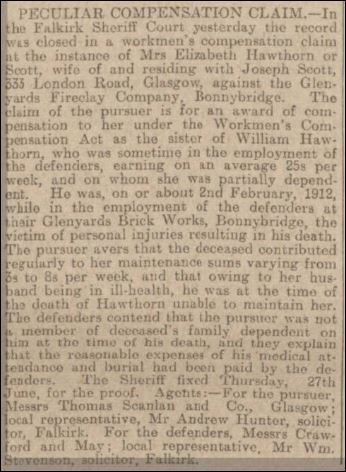 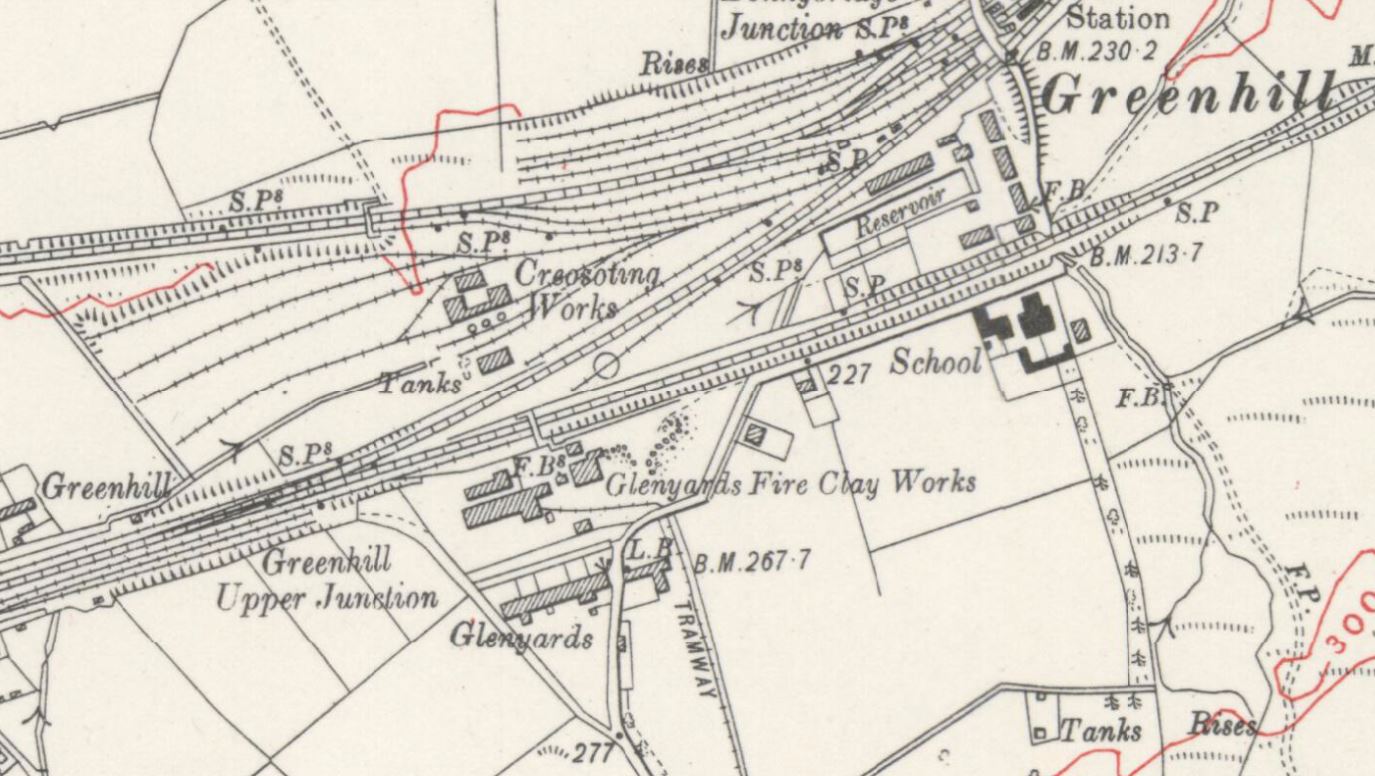 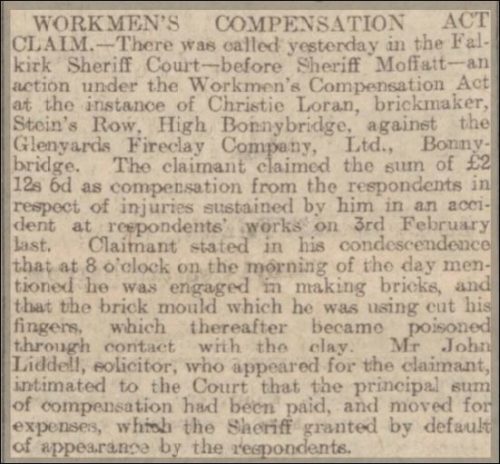 Below – 17/02/1917 – Falkirk Herald – Fatal accident enquiry re the death of Samuel Connor at the Glenyards Fire Clay Pit. 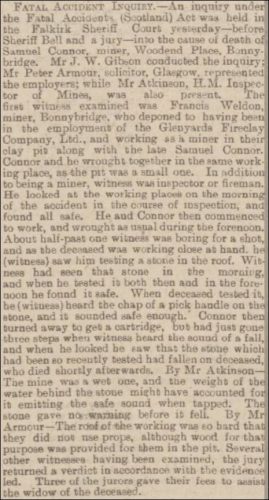 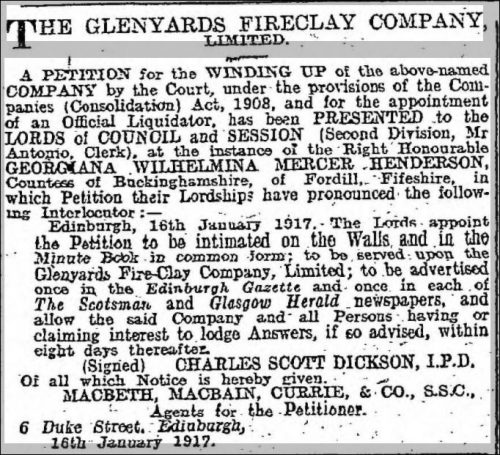 and again 26/07/1918 – The Scotsman – a petition has been presented to the Lords of Council by Mrs Annie Brown or Buist, widow, residing 435 Sauchiehall Street, Glasgow for supervision order in the voluntary liquidation of the company … To be served upon the Glenyards Fire Clay Company Limited and Albert Enoch Roberton Copeland as craved …

10/08/1918 – Falkirk Herald – The Glenyards Fire Clay Co Ltd in liquidation, Bonnybridge – For sale as a going concern the works and plant of the above Company. There is a mineral field of fire clay and ganister, both of excellent quality covering 60 acres, more than half of which has not been worked. There is a mechanical haulage to bring the material to the surface and well equipped pan mill shed with crusher, 1 dry mill and 2 wet mills for preparing the material and an excellent conveyor plant which affords easy means of loading it into railway waggons. 3 drying stoves give scope for turning out 60,000 bricks per week as well as a large output of range grate and stove bricks. The kilns, 6 in number, are of the Newcastle type and in turn out bricks of the highest quality. The Works are situated on the North British Railway, have a large siding and are well placed for dispatching goods to Clyde and Forth Ports. The Company has a worldwide connection and their manufactures have the highest reputation. Cards to view the Works may be obtained from the under noted to whom all offers should also be sent. Albert R Copeland, C.A, Liquidator, 196 St Vincent Street, Glasgow.

20/03/1926 – Falkirk Herald – A motor lorry belonging to the Glenyards Brickworks, Greenhill, Bonnybridge, caught fire on Thursday evening when proceeding to the claypit belonging to the works. The Falkirk Fire Brigade was summoned, and on its arrival, the flames were promptly subdued by the use of the “Anti Fire” pistol extinguisher. Little damage was done to the vehicle.

27/10/1936 – Edinburgh Gazette – The Companies Act 1929 – The following company has been struck of the register and as such is now dissolved – Glenyards Fire Clay Co Ltd.

21/12/1940 – Falkirk Herald – An article of the death of Mr James Ferguson, Bonnybridge a well-known ironfounder … Mr Ferguson was a director with the Cannerton Brick Company Ltd, Banknock and the James Anderson and Co Limited, fireclay manufacturers, Glenyards …

10/02/1945 – Falkirk Herald – Farmer jailed for misuse of petrol (and other road traffic offences)  – William Cowan, Lochend Farm, Falkirk was using petrol  allowed for agricultural purposes but not commercial purposes to drive a lorry between the Glenyards fire clay mine and the Glenyards Brickworks near Falkirk for the purposes of hauling fire clay. He was found guilty and sentenced to 3 months prison time … 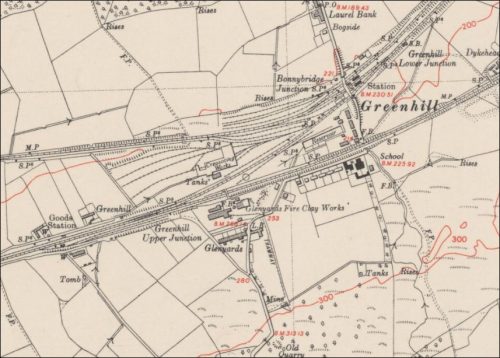 The Company was incorporated in August 1899 with a capital of £4,000. It took over from David Graham the lease of the Glenyard minerals dated 22/02/1989, granted by Miss Caroline Maxwell Muller and James Muirhead, acting for Miss Leonard Maxwell Muller, both of Glenyards. The lease, pits, plant and stock in trade were valued at £2,400 and satisfied by 1,500 shares and £900 cash paid to David Graham who undertook to serve as Managing Director for 5 years. He lived with his brother Peter Graham at Clayknowes House. Other prominent shareholders were Robert Dobbie, iron founder of Larbert, Borthwick Watson of Ardfern, Falkirk and Andrew Hunter, Solicitor of Falkirk. By 1903, another 5 young Graham’s, John, Joseph, Anthony, Jennie and Agnes, all living at Clayknowes House were shareholders. Peter Graham died in 1904 and David in 1913. The company did not flourish and losses were made in most years and mounted to £18,000 by 1915. A liquidator was appointed in 1918 and the Works lay idle till 1922 when it was purchased by James Anderson and Co Ltd.

James Anderson and George Hendry were directors of the Dykehead and Bonnymuir Works and together with the managing director, Robert Walker of Stewarton, Ayr formed a committee which ran the Company. The Glenyard Company was in liquidation and the Dykehead Company offered the liquidator £1,500 but this was turned down. Soon afterwards in July 1922, James Anderson announced to the directors that he had bought Glenyards for £2,750 and offered it to the Dykehead Company at that price. After an inspection by Gerald Hooper, the offer was turned down and Anderson’s resignation accepted.

Mr Hendry was also a director of Craigend Brickworks which were started by Mr William H Wilson before WW2.

James Ferguson of Lane and Girvan iron founders joined the board of James Anderson and helped him with orders for grate back firebricks. A 12 chambered Hoffman Kiln was built and worked up until 1964 when the works closed. James Anderson and others started the Cannerton Brickworks across the valley at Dennyloanhead in 1932 where they made building bricks.