Background – Available evidence suggests that Merry & Cunninghame (Iron and coal masters with substantial mineral interests throughout the West of Scotland), established coal and ironstone workings at Clippens during the late 1850s. Worker’s housing was built by the company at Clippens Square, known locally as Balaclava following the victory in the Crimean war. The Clippens pits appear to have been referred to sometimes as the Balaclava pits.

Successive editions of Mineral Statistics list “Clippens” as being worked as a colliery by Merry & Cunninghame (in 1870, 1871, and 1874) and by Clippens Shale Oil Co in 1877. It is listed in 1879 as worked by Clippens Oil Co. for ironstone and coal (Wm. Archibald, manager) and for ironstone alone in 1885. There appear to have been at least three Clippens Pits. The index of mine abandonment plans, lists abandonment of coal and shale workings at Clippens No.2 in 1878, of coal workings at Clippens No.1 in 1880, and coal and shale workings at Clippens No. 3 in 1883. Watson’s Directory for Paisley lists Clippens coal, shale and ironstone pits, James Scott proprietor, from 1876 to 1881, listing Clippens Oil Co. Ltd as proprietor from 1882 to1884.

When the Clippens Mineral Oil Co. established their Clippens oil works in 1872, they contracted with Merry and Cunninghame for the supply of oil shale. The Clippens Oil Co. purchased Merry & Cunningham’s Clippens pits in 1876, and continued mining operations for coal, shale and ironstone until at least 1885.

The location of the Clippens pits (and indeed the precise location of Clippens Oil Works), remains uncertain. The “Clippins Ironstone Pit” shown on the 1857 OS map, and marked as “old shaft” on the 1895 OS map, seems likely to be Clippens No.1 pit. OS maps show no further shafts that might represent Clippens No.2 & 3 pits, but it seems possible that one or both pits lay to the northeast of No.1 pit, within the large area of derelict ground around the supposed site of Clippens oil works (centred on 55.853269, -4.498055).

Clippens Oil Company Limited – which appears to have been part of  Pentland Oil Works, Loanhead, Edinburgh. From this link, the Company appears to have operated from c.1893 – c. 1912. The aims of the Company were “The leasing and acquiring of shale, coal, fireclay and other minerals, and limestone, clay and raw or unpurified oil and other materials, and searching for, working, raising and manufacturing the same into oil, and paraffin and other products. The selling and disposing of the said shale and other minerals and materials and the products thereof, and the purchasing and dealing therein, and in other materials and products and carrying on the business of oil manufacturers and merchants”

Below – 1857 – Clippens House , Clippens Pit and employees houses (Clippens Square). No reference to a brickworks. 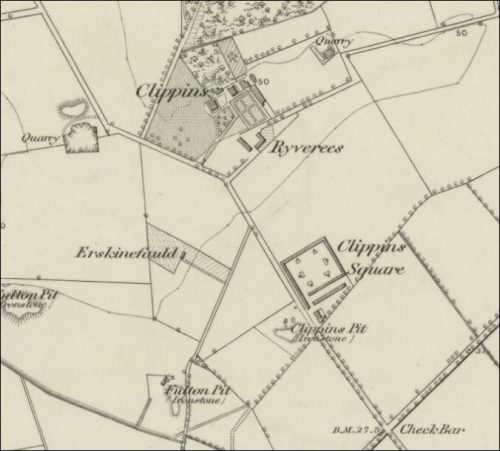 1871  – James Scott (1810-1884) took an interest in the nascent Scottish oil industry. He erected works at the mineral fields at Clippens, in Renfrewshire. He also acquired extensive shale fields at Pentland, where he also erected works. 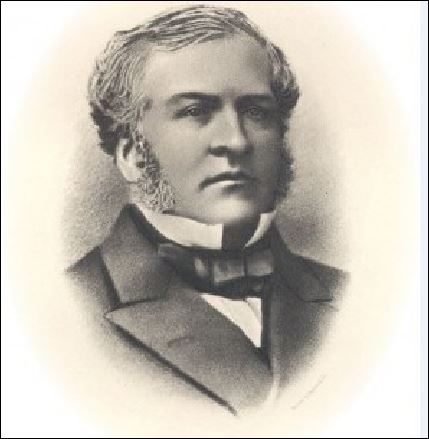 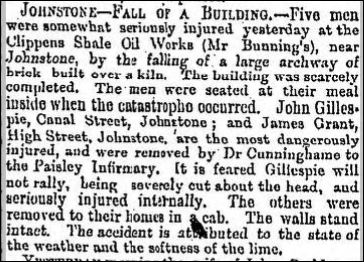 29/10/1873 – Greenock Telegraph – Bricks for sale – First-class quality. Apply to the Clippens Shale Oil Co., 16 Bothwell Street, Glasgow or at their works near Crosslee Station.
24/04/1874 – Glasgow Herald – Bricks for sale of a very superior quality. Square, circular and cubular. Apply to Clippens Shale Oil Co, 16 Bothwell Street.
27/06/1874 – Ardrossan and Saltcoats Herald – Births – At Clippens Brickworks on 20th inst, Mrs Thomas Clarke, a son.
09/05/1877 – Glasgow Herald – Serious accident – On Monday morning, 2 labourers named Charles Kerr and Patrick Quinn residing in Linwood, employed at the Clippens Brickwork, whilst engaged in emptying a brick kiln were severely injured by the roof falling in on them. Quinn was able to walk home but Kerr had to be removed to the Paisley Infirmary where he lies in a precarious condition. The kiln is about 46 feet in length and 15 feet broad and is supported by several props, one of which had been removed on Saturday.
Below – 18/08/1877 – Death at Clippen Shale Oil Work. 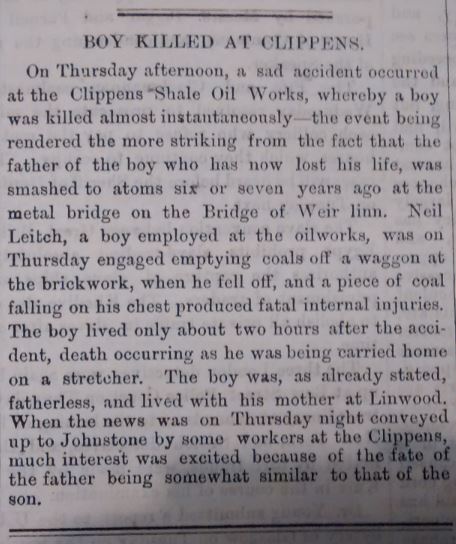 1882  – The business merged into what became Clippens Oil Co Ltd.

Below – 1895 – Clippens House, Clippens Pit and employees houses (Clippens Square). No reference to a brickworks. The Sun Foundry does not appear to be connected to the Clippens enterprise. 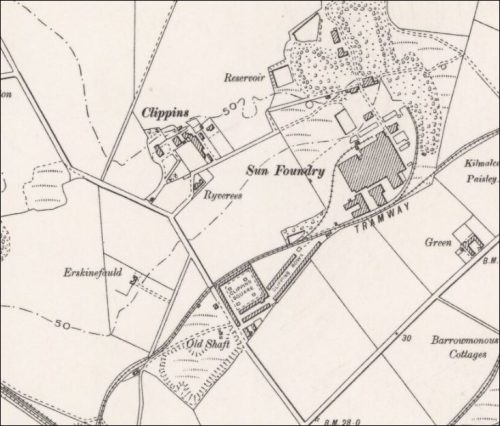 14/09/1899 – Glasgow Herald – Clippens Oil Company valuation court appeals  – Captain Dundas presiding. The Clippens Oil Company (Limited) appealed against the valuation of their works and houses being entered at the restricted amount of £800. Mr Wilson, an advocate, appeared for the appellants, and evidence was led. Mr Armour, secretary and general manager of the company, deponed that he had been a manager for 18 years. Having described the extent of the company’s undertaking at the Pentland and Straiton Works, he mentioned that they possessed 344 dwelling houses for the use of their workmen when the works were going in full order.

The operations of the company had been stopped since 14th July 1897, and from that date, there had been no output of shale whatever from the mines. The result was that the retorts and refineries had been lying silent and unused for almost two years. The workmen had been dismissed and had left the neighbourhood. The cause of the stoppage of the mines was the interdict of the Edinburgh and District Water Trust brought against them for working across the whole of the field. The result of the stoppage was that the mines were in a state of collapse, and it would take at least two years to re-open the works. Before the works were stopped, they were assessed in 1896-97 at £1980, but witness could not understand upon what basis the assessor had fixed £800 as the valuation of the works which were now lying useless. The appellants suggested that the valuation of the works should be fixed at the nominal figure of £100. When the Hermand Oil Works stopped the assessors entered them at the nominal valuation of £50. The Clippens Works were double the size of the Hermand. While they were not objecting to any items in the valuation roll in respect of houses that were at present occupied, with regard to the 280 houses that were unoccupied they suggested the nominal figure of £1 per house, having pointed out the possibility of having these houses let otherwise.

Cross-examined by Mr Lynch, the assessor, the witness said there was no possibility of re-starting the works until the present litigation with the Water Trust was settled, as it was now a matter of physical impossibility of having these houses let otherwise. Evidence was also given by Mr Love, manager of the Shotts Iron Company, Loanhead; Mr Ormiston, surveyor, Edinburgh; and Mr Rankine, mining engineer, Glasgow, in corroboration of the dilapidated condition of the mines and the groundworks. After consultation between the parties, an agreement was come to with the assessor, fixing the valuation of the work at £500 and the houses at £400 for the year.

05/05/1908 – Clippens Oil Company decide to voluntarily wind up the business.

28/05/1910 – The Scotsman –  Clippens Oil Company Limited in liquidation. Land, property, buildings and machinery for sale.
03/01/1912 – Clippens Oil Company finally wound up.
Clippens House “Clippens” was formerly “Clippings” and is thought to get its name from the time when the monks of Paisley Abbey allowed the local people to cut or “clip” the fields. The Cochrane family-owned Clippens from the 16th century and built the present Clippens House in 1817. Clippens House has now been converted into flats … just south of Clippens House, was a square of earth-floored cottages and one small shop.
Tagged with: Clippens, James Scott, Merry and Cunningham, Midlothian Oil Company, Straiton