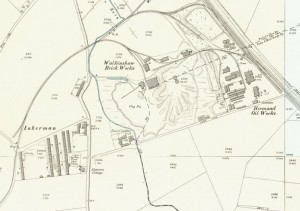 Available evidence indicates that Merry & Cunninghame (coal and iron masters with extensive mineral interests in the west of Scotland), began working ironstone at Walkinshaw (No.1) pit during the mid-1850s. The first edition OS map (surveyed c.1857) shows the engine house buildings of the pit, but no rail link. An 1862 newspaper account (see snippets below) indicates that by that date a mineral railway had been constructed to serve the pit. An 1874 newspaper account describes the pit as 65 fathoms deep and employing upwards of 60 miners. Operation of the pit seems to been taken over by the Walkinshaw Oil Co. c.1881 to supply their new Inkerman oil works. In 1885 the Walkinshaw oil company is recorded as working both shale and ironstone from Walkinshaw pit, under the management of Robert Gibb

In c.1891, following the demise of the Walkinshaw Oil Company, Merry & Cunninghame opened Walkinshaw No.2 pit to the northeast of the original Walkinshaw Pit and extended the mineral railway to serve the new site. The second edition OS map surveyed c.1895 shows a substantial complex of pithead buildings with an associated brickworks. The third edition OS map (c.1914) shows the pit buildings intact, but a new set of brick kilns in place if the original. In 1914 plans were submitted for the abandonment of ironstone workings at Walkinshaw No.2 & 3 pits. The brickworks seem to have continued in production at least into the 1940s, under the ownership of the Walkinshaw Brick Company. OS maps, published c.1950, shows an aerial rope-way was used to transfer pit waste for brick making from the site of Blackstone pits to the Walkinshaw brick kilns. Source

It still produced bricks from mud and clay during the 1960s, however, was closed in the early ’70s and later demolished.

13/12/1855 – Inverness Courier – Sale of land – The Estate of Walkinshaw lying to the North of Paisley has been sold to Messrs Merry and Cunningham at the price of £75,000. It is said to contain some valuable minerals.

04/10/1880 – Glasgow Herald –  Incorporated under the Companies Acts 1862, 1867, and 1877. Share Capital £120,00. In 12,000 shares of £10 each, of which 1764 shares are to be taken by the Vendors. Directors. John Wilson, Esq., Gorbals Tube-Works, Glasgow, Chairman. James Becket, Esq., Calico Printer, Glasgow. James Hamilton, Esq., Iron Merchant, Glasgow. Archibald Russell, Esq., Coalmaster, Glasgow. James Scott Esq., Distiller, Wishaw.
“The Walkinshaw Oil Company, Limited, ” is intended to be formed for the purpose of acquiring-
1. The existing Oil and Brick Works and Workmen’s Houses, situated at Inkermann, near Paisley, and belonging to the Abercorn Oil Company, and also the leases of the large and valuable Mineral-Fields on the Estates of the Duke of Abercorn, Lord Douglas, and on the Walkinshaw Estate, belonging to John Charles Cunninghame, Esq. of Craigends, situated near Paisley, in the County of Renfrew, held by that Company.
2. The East Fulton Oil Works, situated in the Parish of Kilbarchan, near Johnstone, belonging to Messrs James Liddell & Company, with the leases for working shale coal and fire clay held from the trustees of the late Thomas Speir, Esq. of Blackstone. The present oil and brickworks have been valued by Mr James Clinkshill, consulting engineer and machinery valuator in Glasgow as follows:- Abercorn OIl Company, £22,698 6 6; Fulton Oil Works, £9,787 0 0: £32,485 6 6.
To which falls to be added the stocks of shale, bricks, farm stock and crop of East Candren, estimated at £3,000: £25,485 6 6.
The price fixed for the vendor’s interest in the whole subjects, including goodwill and leases, stocks of shale and bricks, and farm stock and crop of East Candren is £30,000, payable as follows:-

14/12/1882 – Glasgow Herald  – Walkinshaw Oil Company Limited – The 2nd annual general meeting of the shareholders of Walkinshaw Oil Company Limited was held yesterday afternoon in the Religious Institution Rooms, Glasgow. Mr John Wilson, Hillhead House, the chairman of the company presiding … As to the company’s brickwork during the last summer and indeed up until the frost set in, it had been in full operation. The directors had found that the process of drying in operation when the work was taken over was of a very antiquated description and the fuel consumed in heating was very considerable. The directors thought it wise, under the supervision of their manager, Mr Neilston, to erect a large new stove in which they could utilise the waste steam, and he was glad to say it had been a very great success. The directors were considering the propriety of erecting kilns for burning brick with the waste gases from the oil retorts and this would be a further great saving …

12/12/1889 – Glasgow Herald – Walkinshaw Oil Company Limited – The annual meeting of shareholders of the Walkinshaw Oil Company Limited was held in the Religious Institution Rooms, 377 Buchannan Street, Glasgow yesterday – Mr John Wilson MP in the chair. The report which has already been published, having been held as read. The chairman moved its adoption. He said the company had been doing a little more in the way of brick making, in order to endeavour to meet current expenses and to keep the place as a sort of going concern. They were also maintaining a surveillance of the works. The litigation which had been going on with Messrs Merry & Cunninghame for the last 2 years in the court of session has now been happily and satisfactorily settled, the contention of the company having been in a great measure correct. The result of the settlement was that they received £7295 in full of all claims and gave up all the plant connected with the mineral subjects. The company had made a slight alteration on their line in order to run the trucks right into the brickfield and the Caledonian Company had agreed to perform the work. The restoration of East Fulton had now been completed and the whole affair taken off the company’s hands. Of course, it could hardly be expected that there would be any profit arising from the operations of the company, the only thing they had to depend on being the farms. On these, they had obtained a slight deduction of rent and they were now able to clear themselves.

In answer to a shareholder, the chairman explained they were getting a profit of 2s to 3s per thousand on the bricks and that output was about 12,000 per day. It was possible that a better price might yet be obtained.

The report was then adopted.

18/07/1891 – Linlithgowshire Gazette – Ambulance class – a reference to Mr Armour of West Calder brickworks presenting Dr Smith with a dressing-case and travelling bag in respect to the manner in which he took the classes.

Below – 1895 – Walkinshaw Brickworks at Inkerman. 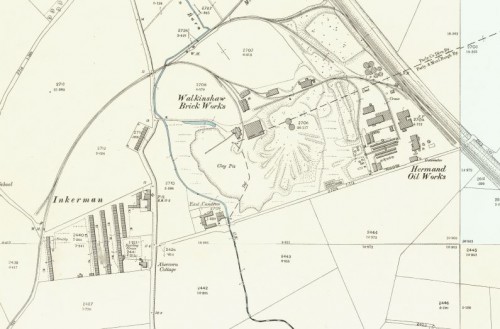 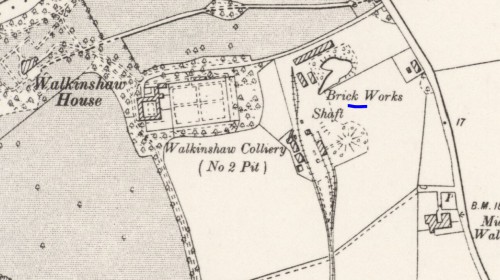 Jan 1900 – British Clay Worker – New brickworks at Paisley and Glasgow. The Walkinshaw brickfields on the Abercorn Estate at Inkerman near Paisley are being opened up for making plastic brick. The shale heaps on Drumoyne Estate, South Govan, Glasgow for making composition bricks have been acquired by the Drumoyne Brick Company, Govan, who are putting down machinery and erecting kilns at both places.

20/07/1900 – Linlithgowshire Gazette – New Hermand Oil Company  – Reference to the Old Hermand Oil Company holding a lease on the old refinery and brick works at Walkinshaw. The brickworks had been sublet at a satisfactory rental and some little time ago the directors disposed of all the old plant of the refinery taking advantage of the high prices ruling recently for such material … 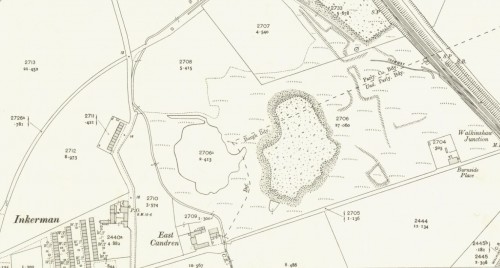 25/03/1930 – The Scotsman – Merry & Cunninghame – Director’s report  … The brickworks at Walkinshaw were carried on steadily throughout the year, but business in bricks was very slow and prices fell considerably … 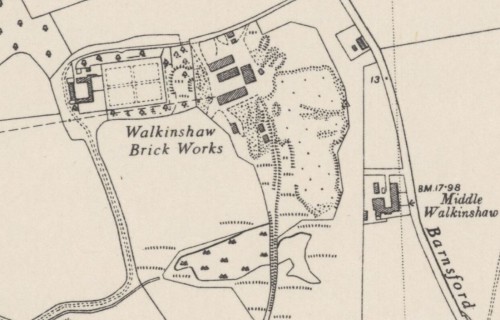 1960s – 1969 – The 1985 publication ‘A survey of Scottish brickmarks’ suggests that the Alexandra Transport Company were operators of these works during this period.

1969 – 1975 – The 1985 publication ‘A survey of Scottish brickmarks’ suggests that the Scottish Brick Corporation were operators of these works during this period.

This is a link to my Walkinshaw bricks

… Evidence suggests that mining operations continued at Blackstone until at least 1900. At the same time a brickworks was constructed, presumably to consume the waste of past mining operations. This passed to the ownership of United Collieries c.1905. OS maps of the 1940s show the Blackstone site cleared of buildings and an aerial ropeway in operation to supply waste from the Blackstone bing to Walkinshaw Brickworks.

April 2013 – Daily Record … That was when I first saw the gloomy Walkinshaw Brickworks.

The eerie edifice was an architectural manifestation of the soulless spirit of 19th century Industrial Revolution ‘dark satanic mills’.

Owned by iron-masters Merry and Cuninghame, the weird workplace employed men from nearby Ferguslie, Millarston, Gockston, Inkerman and Linwood.

It still produced bricks from mud and clay when we ran past it during our 1960s training sessions.

One worker revealed how labourers in the grimy factory resembled black slaves because they were encrusted from head to foot in dark stour.

Noise from manufacturing machinery reverberated so loudly that employees could only communicate above the din with hand and finger signs.

A calamitous event unfolded in February 1912, when a gang of workers walked home one stormy night after a long day’s shift.

They’d turned off Greenock Road into Candren Road, near Paisley Racecourse when they were struck by forked lightning.

James McCrudden, 52, received the full impact on his head and chest.

His cloth cap was shredded and he perished instantly.

A police constable arrived but James lay by the roadside until a Doctor Gardner arrived from Paisley to confirm the death.

It was feared witnesses would be electrocuted if they touched his frazzled body.

James, who had a wife and eight children, lived at 156 Inkerman Rows, beside White’s Bridge, between Ferguslie Park and Linwood.

Today, Walkinshaw Brickworks are no more and much of the surrounding countryside is buried below the M8 motorway and Glasgow Airport.

But on star-lit nights, rosy glows flicker across darkened fields from the derelict brickworks site.

Are they from lamps illuminating airport runways … Or do phantom furnaces still burn at the old factory?

And are spectral shadows stealing over the countryside cast by low-flying aircraft or do ghosts of long-dead Walkinshaw brick workers still stumble along Candren Road, where poor James McCrudden was blasted to death more than 100 years ago?

Below  – The area to the left of the road is how the Walkinshaw Colliery No 2 pit/brickworks look in recent times. 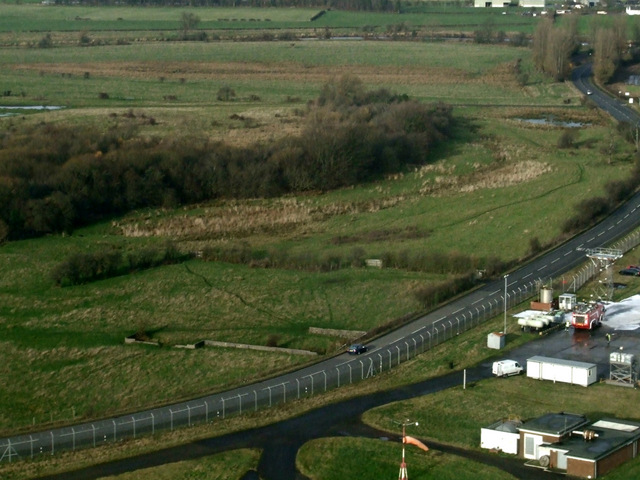