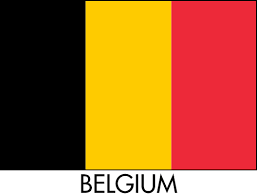 There are many newspaper articles detailing the import of Belgian bricks to the UK as a whole. Below is a selection of those.

The Belgian bricks appear to have been cheaper than locally manufactured bricks and used to build houses during brick shortages in the UK after both world wars. The bricks, however, appear to be of very poor quality. They chip and break easily and degrade very quickly when exposed to the weather. They were only suitable for use in internal walls. It is not known if they were stamped and they are described as being red in colour and smaller than a British brick.

Has anyone found a marked or unmarked brick in Scotland that they believe to be of Belgian origins? 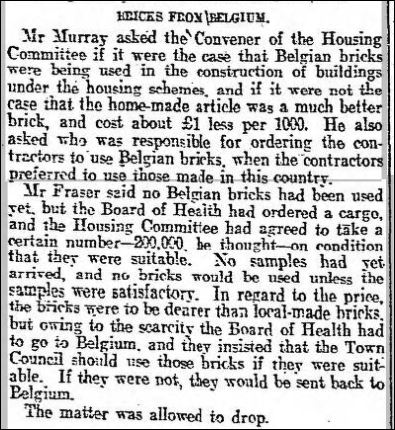 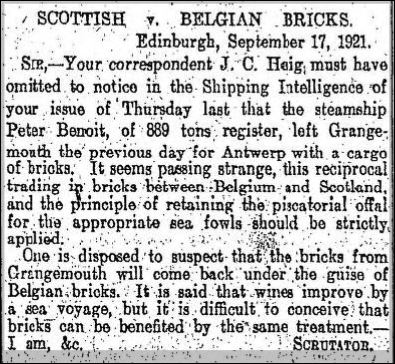 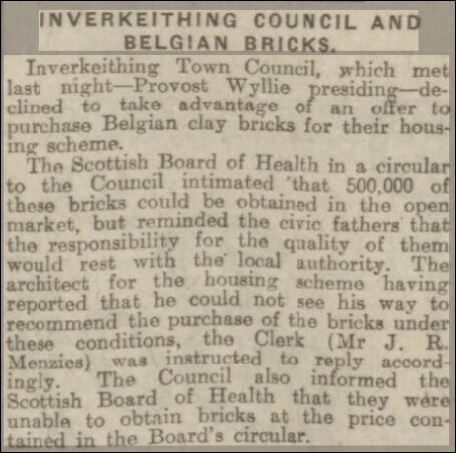 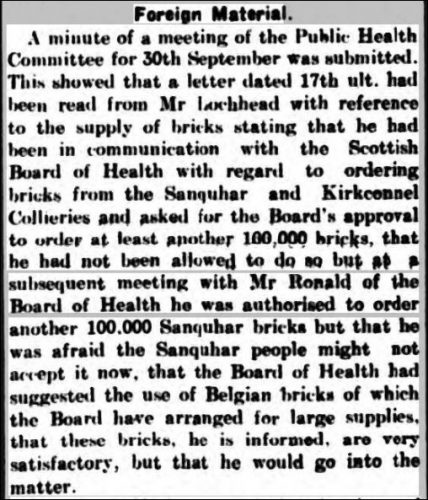 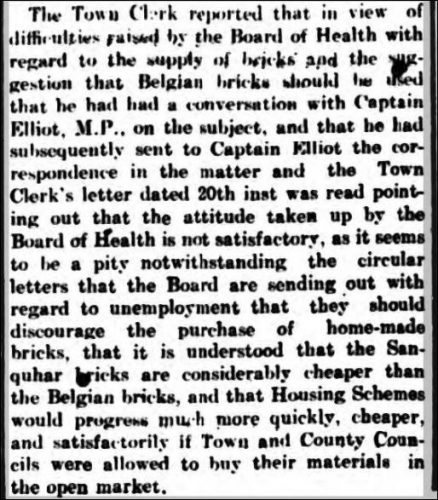 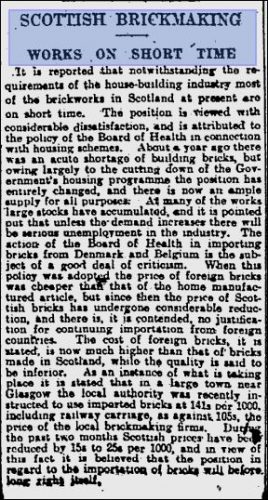 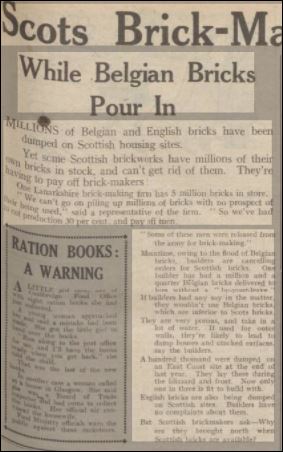 28/06/1946 – Dundee Evening Telegraph – Allocation of 50,000 Belgian bricks has been made to Dunfermline Town Council. Slightly smaller than the British type, they will be used as facing bricks in the Council scheme for 350 houses at St Leonards Hill. Delivery is expected in August through East Scottish ports. The town council is hoping to get the bulk of the local brick supplies. 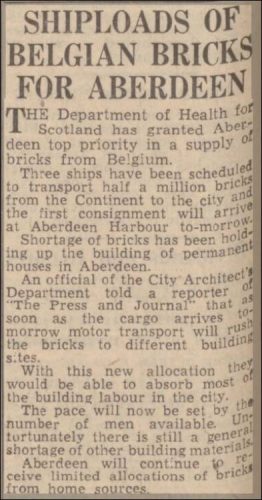 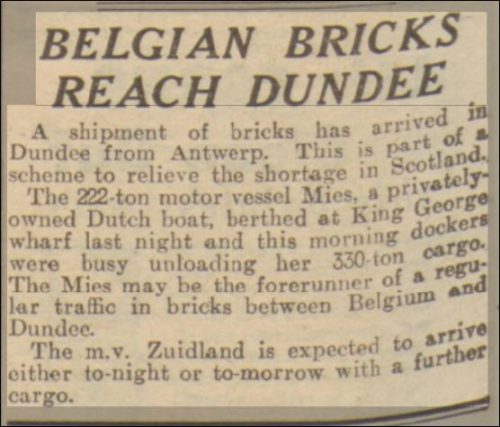 10/08/1946 – Dundee Courier – 390 tons of Belgian made bricks arrived at Arbroath harbour yesterday. They were brought from Antwerp by the steamer Adm De Ruyter of Scheveningen – the first foreign arrival at the port since pre wars days. No time was lost in unloading the 150,000 bricks and having them taken to the housing site at Guthrie Hill. Other consignments are expected soon. 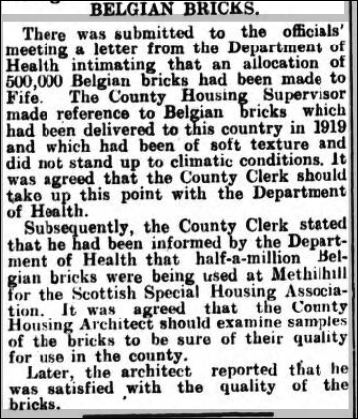 13/09/1946 – Arbroath Herald – A second consignment of Belgian bricks – 250,000 in number, for Arbroath municipal housing schemes arrived at the harbour on Wednesday in the Zeeland.

07/11/1946 – Dundee Courier – Unloading of 157,000 Belgian bricks for Purvis Industries Ltd started at Montrose yesterday. The bricks for Kincardine County Councils 18 house scheme at St Cyrus were brought from Antwerp by the motor vessel Empire Sloane. About 400,000 bricks will be required for the houses. 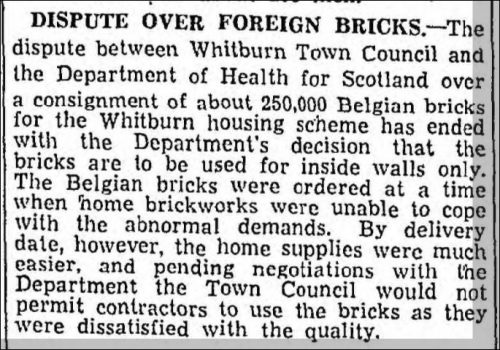 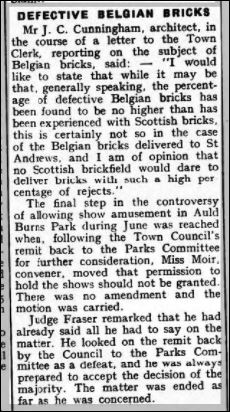 Below – 18/02/1948 – Dundee courier – Belgian bricks deteriorating in the weather while stacked at St Cyrus. 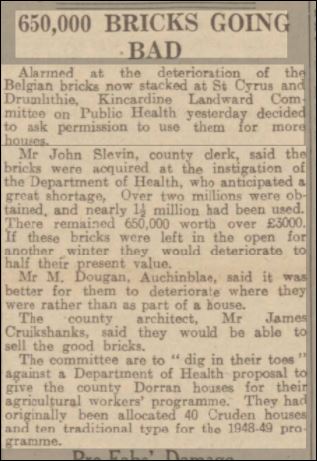 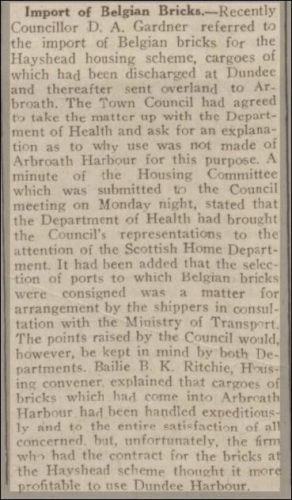 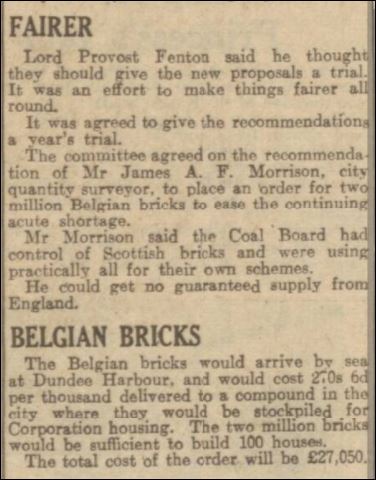 1952 – Glasgow buys Belgians. Large purchases of Belgian bricks are recommended in view of a shortage of supplies.  It was reported that to maintain an adequate supply to meet the increased output of the bricklayers under an incentive bonus scheme, the director of housing has placed an order for 2,000,000 Belgian wire-cut clay bricks at £12 19s, 0d. per 1,000.
It was also intimated that the Scottish Housing Group had a number of urgent requests from the contractors engaged in the erection of houses at Barlanark, Milton, and Barmulloch for assistance in obtaining bricks and that the group had obtained an option to purchase 1,000,000 Belgian bricks at approximately £13 per 1,000.  The housing sub-committee concerned agreed to offer no objection to the purchase.-Glasgow Herald. Source – British Clayworker Magazine 15/11/1952

1952 – Lerwick Town Council buys Belgians. Faced with the problem of whether to use concrete blocks or to import Belgian bricks to keep their housing programme going, the Town Council has, on the advice of its architect, decided to import further supplies of Belgian bricks. Source – British Clayworker Magazine 15/12/1952

1953 – Glasgow Brickmakers Object To New Road Plans  – Would Mean Abandonment of Clay Pit. An inquiry into the proposals contained in the Glasgow Corporation’s “Development Plan” was held at the Judiciary Buildings, Glasgow, last month.  A proposed new outer ring arterial road at Polmadie was the subject of objections by John Paterson and Son Ltd., brickmakers, 91, Polmadie Road, on whose behalf it was stated that the road would intersect a clayfield at Toryglen and sterilise 131,000 cubic yards of clay, representing between 35,000,000 and 40,000,000 bricks.  The firm’s scheme at Toryglen would, in fact, have to be scrapped, if the plan were approved, although the area was the only remaining one in Glasgow and district from which clay for brickmaking could be obtained.

It was also stated for the firm that 11,000,000 Belgian bricks, said to have been of poor quality and dear, had to be imported into Scotland last year and that the Ministry of Works had been and were still pressing them to increase production.  The firm had also supplied Glasgow Corporation with 1,000,000 bricks in the last six months. Source – British Clayworker Magazine 15/05/1953

Row over Belgian bricks – Town complains to B. B. C.

Severe criticism of the “Belgian Bricks” part of the recent B. B. C. broadcast, “Shetland Prospect,” was voiced at a special meeting of Lerwick Town Council by Baillie George H. Burgess.  He quoted Mr Moultrie R. Kensal as saying that three million Belgian bricks had been imported into Lerwick at a cost of £12 per 1,000, that they had been condemned, and that the gigantic pile of them lying on the outskirts of the town represented a waste of £36,000.
According to the Bailie, Mr Kelso all had added, “There it lies, a monument to the folly of policy of importing from Belgium,” and that in 100 years time ” some archaeologist would dig it open under the impression that it was another Pictish Brochure.”
Baillie Burgess said that most of the bricks had been used for housing and that fewer than one million, representing a value of £4,425, were left, and that a large proportion of these would be used in present housing schemes.  That part of the broadcast was inevitably calculated to bring discredit on the local authority; it was outrageously incorrect and was little short of slander on the Town Council.
He moved that the Council ask the B. B. C. to supply the name of the party who gave the information about the bricks to Mr. Kelso all so that he could be labelled as a  public menace and also to arrange for a broadcast correction of what was put out in the original broadcast and that the time of correction be intimated in the Radio Times.
The Town Clerk said that he sent a telegram to protest to Mr Kelshall the day after the broadcast, asking for a correction of the statements made.  He had received a telegram from Mr. Kelso all saying that he was posting a letter to the Council.
The motion submitted by Baillie Burgess was unanimously adopted.

Glasgow Councillors Discuss Cost of Belgians.  Details of greatly added costs of cement and bricks brought from other places, including Belgium, because of local shortages, were given by the housing convenor in reply to a series of questions by Councillor John Blackwood.
The additional costs per ton for cement the convenor said, were as follows; From Inverness, 47s. 6d, from London (by road), 68s, from Belgium (private shipments), 63s. 6d.  The prices per ton of current local deliveries were: English cement, 107s, Scottish, 104s. 6d.  Based on the local average current price of bricks at 13s. Per 1,000, the additional cost of Belgian bricks was 124s. per 1,000, the result, it was understood, of transport charges.
Was this caused by lack of raw materials or by maldistribution of the available supplies, Councillor Blackwood asked.
The convenor replied that there might be truth in both suggestions so far as the Glasgow area was concerned.  The question, he said, would be raised at a forthcoming meeting with some of the “higher-ups”.  If more attention were given to distribution, he suggested, some of their troubles might go.
Councillor John Warren said that it had been suggested that half of the trouble arose through the exporting of cement and bricks to Belgium and other countries, from whom we were buying them back at double the price.  Was there anything in that suggestion?
The convenor stated that he was not in a position to answer the question, but he could say that something similar to that had happened many times.-Glasgow Herald.