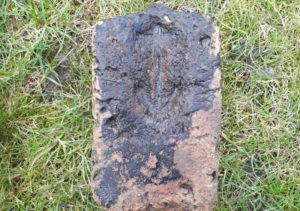 These two bricks were found in the tidal muds at Grangemouth, Scotland and in the same location as a number of confirmed Russian stamped bricks.
Their ‘yellow’ colour, size (narrow) and visual composition suggest they may be early Dutch bricks.
One would appear to have the imprint of an anchor or perhaps it is a double-headed arrow design.
Does anyone recognise the brick stamp?
Is there date range for the import of these bricks to the UK?
Are there brick size parameters that help determine whether this is a Dutch import or not?
.
. 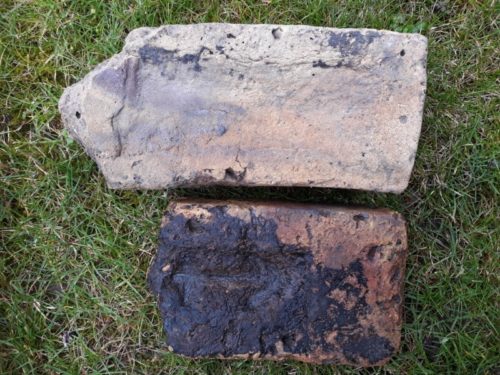 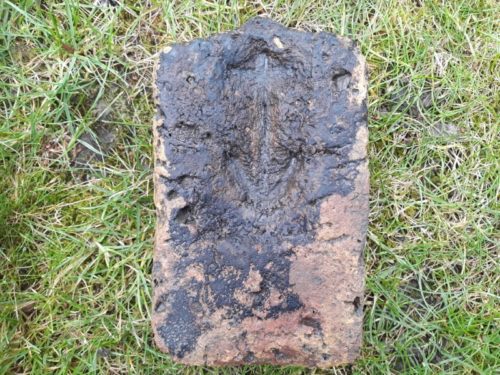 Below – Ian Suddaby found a similar one at the exact same location. Ian states – This is my example. It certainly has a similar ‘arrow’ at one end but a bit more cross-like at the other. Surely the same maker though. What’s the black coating? The other bricks don’t have that. The dates for the Russian bricks seem to be the 1840s to 1860s so that’s likely to be the date of the possibly Dutch ones too. 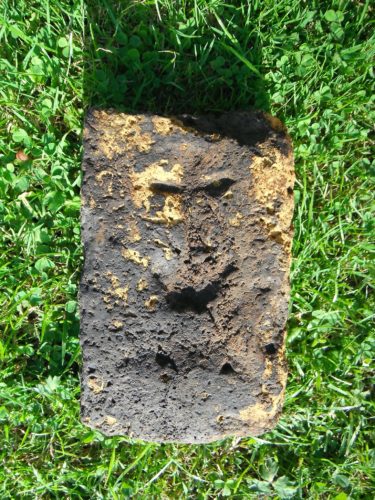 Vladimir Smirnov points out that The Hoganas Fireclay Works, Sweden often used anchor designs on their fire bricks. I have found Hoganas firebricks just 2 miles along the shore. However, the anchor bricks discussed here are not firebricks and I think Hoganas only manufactured fire bricks.
Below – Anchor stamped bricks were also manufactured in the Wellington area of NSW, Australia. Perhaps, in the event of no other useable cargo, these were purchased to act as ballast for sailing ships returning to the UK. 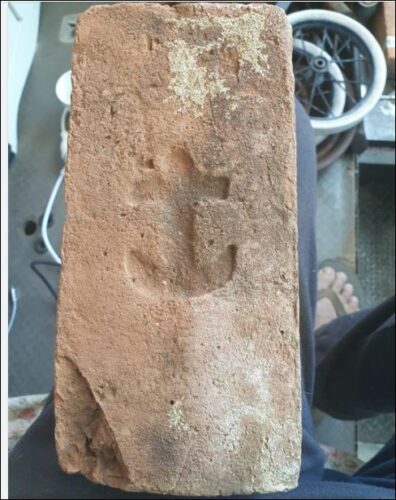 The following information on the Australian ‘anchor’ stamped bricks was supplied by Frank Hunt – “Stephen Grimson 29, came to Australia in 1856 with his 3 yr old son Edmund. His brothers Samuel 21, & Robert were already here living at Newtown. The 3 brothers (all born in Norfolk, England)  “started” (so the family history says but I think it should be “started at”) the St Peters brickworks in Sydney. They seem to have sold out around 1870 & Stephen & son Edmund bought 2 horse teams carrying goods, Sydney to Bourke.   Edmund married Mary Ann McGuire who just happens to be the sister of my great grandmother, Sarah Jane McGuire, (married Daniel Kennedy) on my mother’s side. Samuel settled at Crookwell & Robert in Wellington.  I found an article in the Wellington Times, dated Thurs 2 March 1933, where a journalist is writing about “the good old days”. There are a few lines mentioning a Mr Wells who had a brickyard for many years on the Bell River banks where he was contemporary with Mr R. Grimson. These two made bricks for nearly all buildings in & around Wellington. Wells bricks had a rectangle stamped in them while Grimsons had an anchor … The brickworks were at Junction Park which these days is John Oxley Park. The 1872 Greville’s Post Office Directory has Robert Grimson, Wellington, brickmaker. The kilns were destroyed around the end of WW1”.