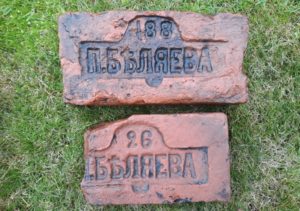 Ian states – Down and dirty at low tide in the bed of the River Carron at Grangemouth on the Firth of Forth. Even though I’m very close to the wharf where many Grangemouth bricks were shipped out in the years before WWI, I never expected to find three foreign bricks. All three have the same name but all are different. I think these are Russian as they clearly include at least one symbol that was discontinued in their alphabet before 1918. The symbol ѣ, the third one along. It’s nice to see what I’m assuming was brick ship ballast coming into Scotland for once. 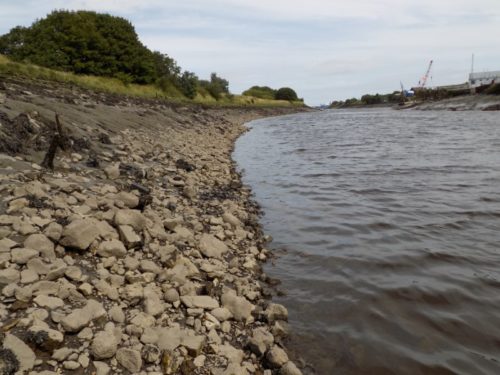 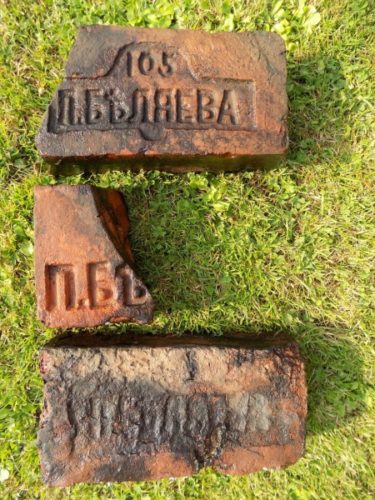 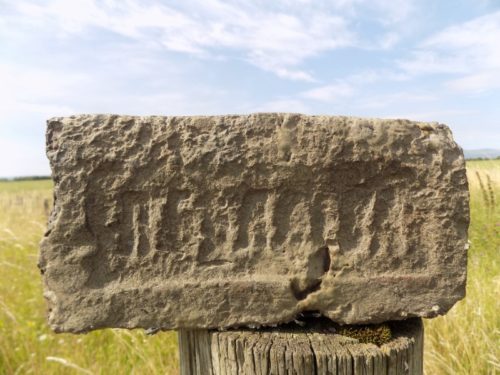 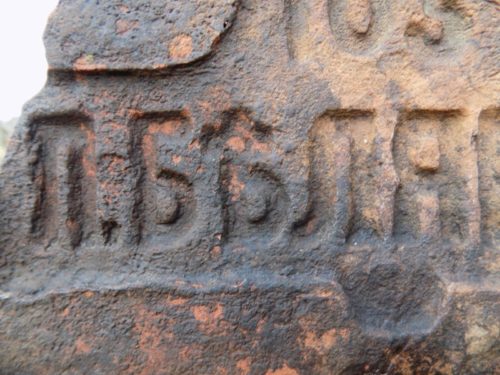 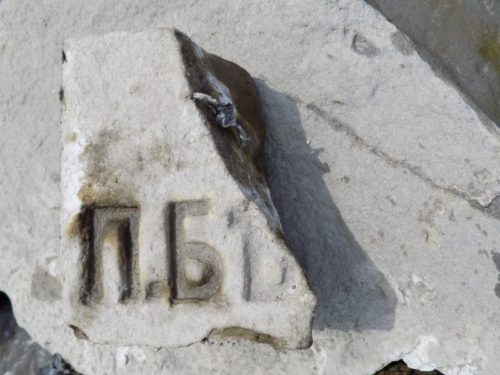 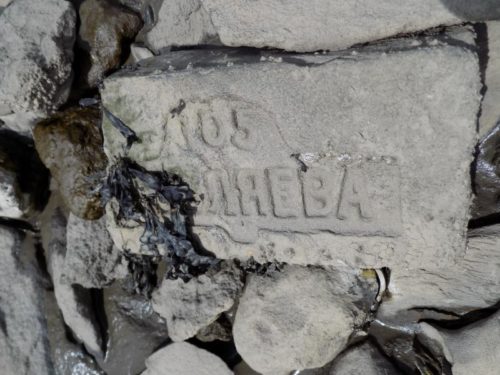 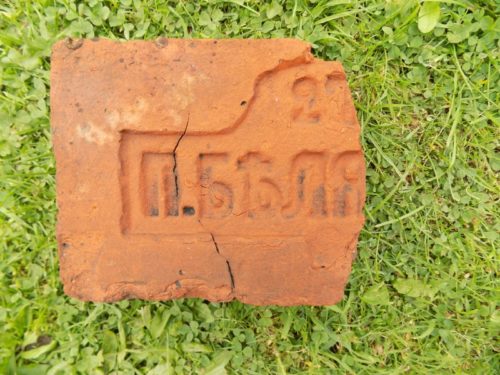 With regards to the above finds, Vladimir Smirnov, St Petersburg, Russia states – It is fantastic the merchant in the first guild Peter Abramovich Belyaev from St.Petersburg has reached Grangemouth!!! He had several brick factories located on the right bank of the Neva River dated from 1861. He used brickmarks П.БѣЛЯЕВА (with variations) and ПБ. After his death in 1884, the business was owned by his widow and later operated by nephews under the firm “P. Belyaev’s Successors”. The story ended in 1917 and Belyaev’s bricks are regarded as one of the most frequent finds in our area due to the long term of work and production capacities. 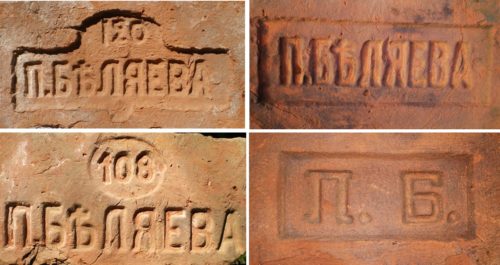 The above bricks are stamped with different numerics, 105, 108, 120. Vladimir states – This is the internal factory number assigned to the particular worker responsible for the production of the certain set. These numbers were fixed for the workers and one worker used the same stamp during his years at the factory. New workers received new numbers or new stamps were ordered when getting broken. In principle, high numbers indicate that the factory worked for a long period of time and had many workers. It is only in theory and if these notes were really kept from year to year, revolution, Stalin’s times and WWII make this far from reality. 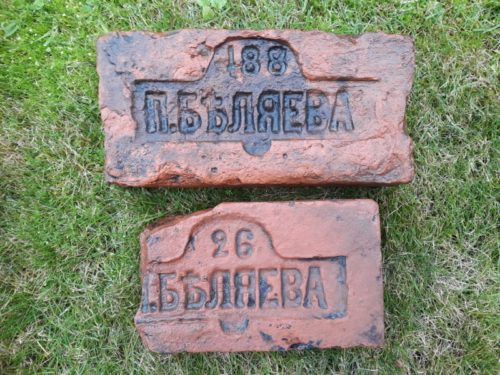 Below – there is a mark to the top right of this brick that resembles a bird’s footprint or some other 3 toed beast – it may, of course, be simply a vivid imagination as it is not clear. 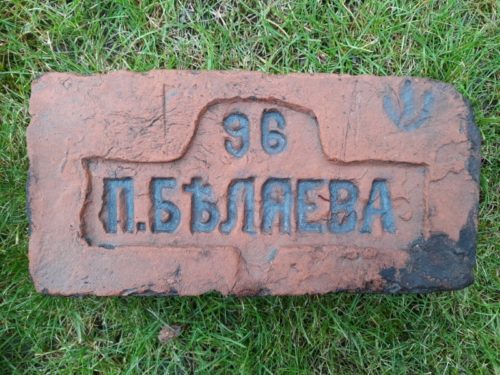 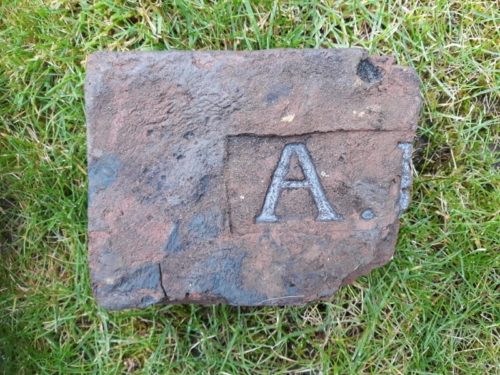 Below – This is possibly the full stamp. 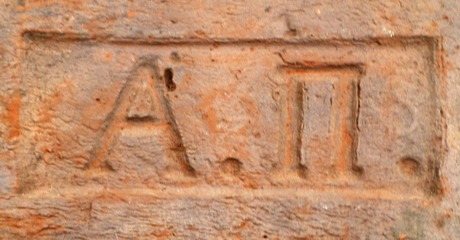 Below – Ian Suddaby also found these two bits of broken brick at the same location.  Vladimir Smirnov has confirmed these are of Russian origins too. Vladimir states- “The full mark is K.K.З. – State-owned. Brick. Plant. The brick was made between 1840-60. In the early 1860th with the appearance of small private businesses state-owned brickyards gradually became unprofitable and were sold to private hands. They had 4 production sites on the bank of Neva River in St.Petersburg, Russia. 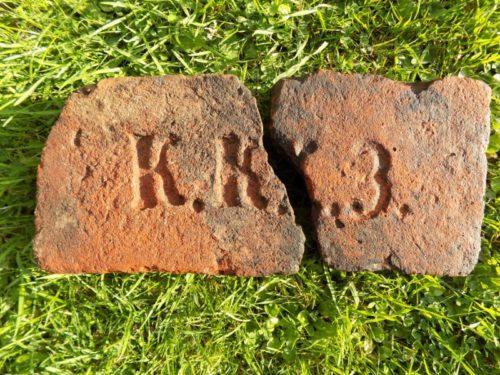 Below – The full stamp. KK3 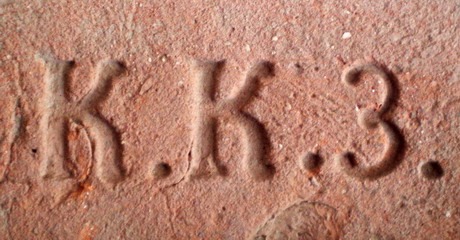