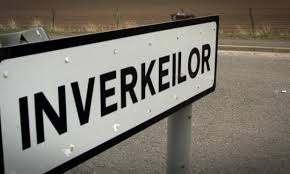 27/11/1860 – Dundee, Perth and Cupar Advertiser – Tilework and the land of Estate of Anniston, Near Arbroath – The well-known brick and tile work on the Anniston Estate at present possessed by Mr Duncan. This Work which has been long and successfully carried on by the present tenant is situated within 5 miles of Arbroath, and close to the Turnpike Road between Montrose and Arbroath. The Leysmill Station of the Scottish North Eastern Railway is within 4 miles of the Work. A great market is open for the supply of bricks in Dundee and to encourage the traffic the railway companies have agreed to be content with a very low special rate from that station to Dundee. There is an abundant supply of clay of the finest quality and easily got; and the Works being situated in a wide fertile district, the hitherto excellent demand for drain tiles may, in the hands of an enterprising tenant, be continued or increased. There is a good dwelling house and steading of offices, with sufficient drying sheds and a complete set of machinery; for the works, there is a steam engine of ample power, all in going order. There is attached to the Work, about 5 3/4 imperial acres of first-class land and an arrangement may be made for enlarging the extent of the land as far as the tenant desires to give him horse labour at a cheap rate. For further particulars apply to Mr C Kerr, Dundee, the factor on the Estate, with whom offers are to be lodged. Mr Duncan the outgoing tenant is not to be an offerer. The Grieve at Anniston will point out the boundaries. 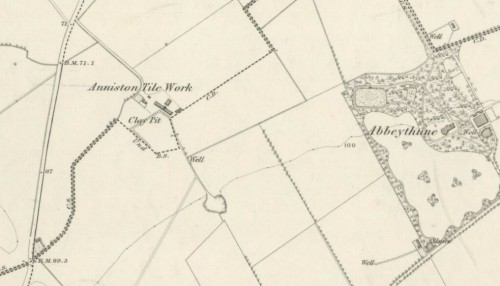 19/07/1866 – Fifeshire Journal – Tilework and land on the Estate of Anniston, near Arbroath. To be let for such a number of years as may be agreed upon, with entry at Martinmas 1866. The well known tile and brickworks on teh Anniston Estate, at present, possessed by Mr William Robertson. This work, which has been successfully carried on by the present tenant, is situated within five miles of Arbroath, and close to the Turnpike Road between Montrose and Arbroath. The Leysmill Station of the Scottish North-Eastern Railway is within four miles of the work. A great market is open for the supply of bricks for Arbroath and Dundee. There is an abundant supply of clay of the finest finality and easily got; and the works being situated in a wide fertile district, the hitherto excellent demand for drain tiles may, in the hands of an enterprising tenant, be continued or increased. There is a good dwelling-house and steading of offices, with sufficient drying sheds, and a complete set of machinery; for the works, there is a steam engine, of ample power, all in going order. There is attached to the Work, about Imperial Acres of first-class land, and an arrangement may be made for enlarging the extent of Land as far as the Tenant desires, to give horse labour at a cheap rate. – For further particulars apply to Mr C. Kzaa, Dundee, the Factor on the Estate, with whom offers to be lodged. The outgoing Tenant is not to be an offerer. The Gams at Anniston will point out the Boundaries.

15/10/1894 – Dundee Courier – Death of an old residenter. General regret will be felt in Arbroath and district at the announcement of the death of Mr David Harris late senior partner of Anniston Brick and Tile Work, and butcher in Arbroath. Deceased, who had reached the age of 76, had been connected with the butcher trade for some 33 years. He was, however, a brick and tile maker to trade and was a partner and the last tenant of the Wardmill Brickworks. No one was better known in Arbroath or more widely respected. He was liked by all for his genial good nature and his ready wit, and many a one will miss him for the kindly deed done in secret. The deceased leaves three sons. James, captain of the Anchor Liner, the Furnessia; William, a Board of Trade surveyor in Hull and George who carries on the butcher business in Arbroath. It is somewhat of a coincidence that the deceased will be buried on the same day as that on which his wife died exactly eleven years ago.

06/08/1937 – Arbroath Herald – Local brickworks – Since there is a change in the ownership of Anniston Brick and Tile Works, Inverkeilor, a few notes on the history of brickmaking will not be out of place … Angus clay can be made into durable blocks for the purpose of housebuilding and in the vicinity of our local brickworks, there are immense deposits of clay, which will not be “worked out ” in our time, or in the time of succeeding generations. All the clay used here is dug by hand —a laborious job indeed ! —then filled into hutches which are drawn up an incline to the clay mills by an endless rope. Such mills continually revolve around a trench, crushing and reducing the clay to powder and by the aid of other intricate machinery, the paste is mingled in a vat out of which it passes to other machines which form automatically the shapely brick. In its plastic form, it is energetically whipped onto a barrow by waiting, experienced hands and stacked in the drying sheds before being finally removed to the kilns. These kilns are large roomy places with several fireplaces round their sides and with a flue leading up from them to the top. All brick ware is packed carefully within them, care being taken to prevent one object from touching another, or they adhere in the firing and are spoiled. Later on, the doors are bricked up and every crack pugged with clay and the fires set a-going. Workmen attend to this part of the job day and night to maintain the heat. This heat is very often transparent, while the kiln walls average four feet in thickness to withstand it. Finally, however, the kilns are allowed to cool down, and when cold enough are “ drawn ” —that is—the fire brick cells are pulled to pieces, and the bricks removed. Then, they are stacked outside on waste ground, in huge square piles, ready for the market. The process of tile-making is in much the same order, but the quantity of brick supersedes these by a few million.

09/08/1938 – Dundee Courier – All parties having claims against the late Charles Stewart, Anniston Brickworks by Arbroath or against his firm J. Stewart & Son, Anniston Brickworks (of which the deceased was the sole partner) are requested to lodge same with the subscribers within 10 days from this date and all parties indebted to the deceased or to his said firm are requested to make payment to the subscriber within like period … 09/08/1938. 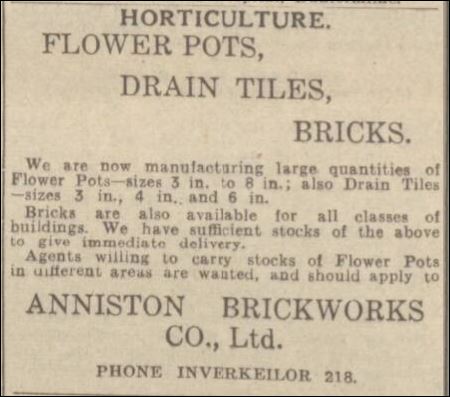 25/06/1955 – Arbroath Guide – Anniston Brickworks. Though the present owners of the Anniston Brickworks, Anniston Brickworks Co. Lt,  have been in possession of the business only since 1938 there has been a brick and tile making works at Anniston for around 80 years. So Mr James Rae, manager of the brickworks told a ‘Guide’ reporter who visited the works this week to see for himself how this time-honoured industry was progressing in an age when one is apt to forget the older industries of the district so successful are some of the new. At Anniston, the main product is the making of agricultural drain tiles. From all over Scotland orders come for Anniston made tiles. Out reporter just missed meeting a buyer from far-off Benbecula in the Outer Hebrides. The first step in the manufacture of these tiles is the excavating of suitable clay by a digger from a clayhole not far from the works. The firm owns some 14 acres of ground suitable for this purpose and the number of large water-filled holes round about bear evidence to the great quantities of clay that have been excavated over the past years. The clay is taken in tubs from the hole to a pug mill where it is ground down and its various grades mixed. The clay is put into a hopper and comes out in a worm-like shape to be cut off by wire cutters in three, four or six-inch sizes according to the size of tile required. These are then placed in a drying shed, which is specially heated. There they remain for a period till they are placed in the kilns and fired there at a temperature of around 1200F. They remain in the kilns for four days and then are put out in the open yard till they are required by a customer. While tiles form the main source of industry to the works the firm also makes brick from the self-same clay, though not in the scale they did in former years. Why not is a mystery for Anniston-made bricks are first-rate bricks. The making of bricks follows the same processes enacted as with tiles – clay from the pit to the mixer, to the machine which cuts them, a spell in the drying shed, and then to the kilns prior to being placed in the yard. Another product of this enterprising firm is the making of flower pots. Six sizes of pots from a 3″ to an 8″ are made. These are made on a machine equipped with a lower stationary mould and a revolving die both of which are cone-shaped to suit the shape of the pot. The upper revolves and the lower mould moves upward to form the pot. It is then lowered and the pot taken out, dried and burned prior to being placed in the yard as stock. The most recent product of the firm is the manufacture of plain concrete building blocks and this has proved a very successful venture. From January to May is the busy season in the works for it is then the farmer wants to buy drain tiles before his crops are sown. But trade depends on the trend of crops grown. If there should be a large number of grasslands in preference to crop bearing fields it could be that there will be many more tiles bought. At the works, our reporter saw a very old Shanks made engine, considered by Mr Rae to be around 100 years old. This old engine is still in daily use driving the pugmill and the tubs from the holes where the clay is excavated. That is has given service for so many years with nothing more than the normal breakdowns is most credible to its makers and to the generations of brickwork engineers who have cared for it. Another landmark hereabouts is the 80-foot chimney stack which takes the draught from the kilns. To passersby on the Arbroath-Inverkeillor Road, it is a familiar sight. The firm today enjoys a good trade in tiles and other side products with bricks not so much in demand now. Anniston, despite its age, can meet the demands made on it and is very much alive not only to doing this but also to making known, well away from this area, how good its products are.

Below – A collection of bricks found near to the Anniston Brick and Tile Works and believed to have been manufactured there. The brick marked ‘Anniston’ has one stretcher side that is graduated with small linear lines covering the whole face. The other bricks have this same ‘design’ on at least one brick face and thus confirm they most likely all came from the same Works. 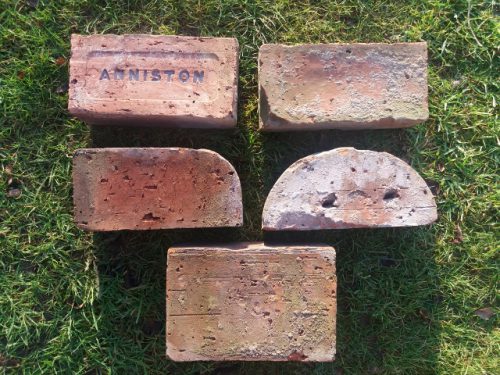 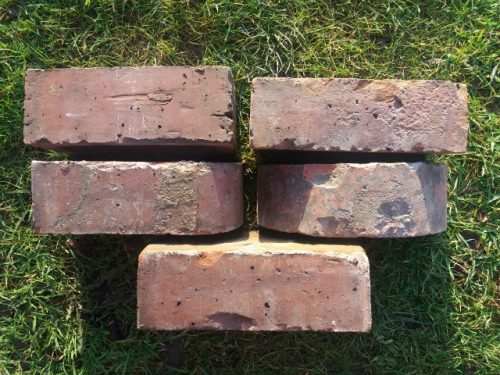 Below  – A close up showing the linear markings. 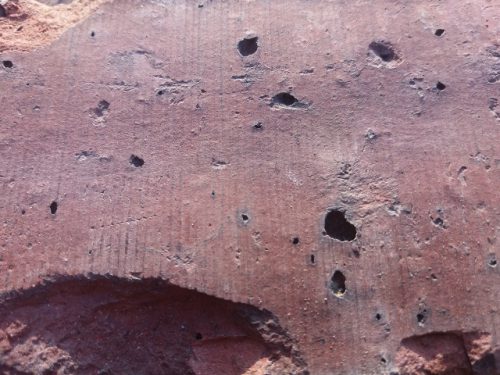 Below – The semi-circular coping bricks also display marks as left by a brick lifting tool.  The outside to outside measurement of the holes left by the device are 4″ apart. Note the circular mark between the holes. This was 1″ in diameter and was used as a ‘depth gauge’ to stop the brick worker from pushing the lifting device in too far. 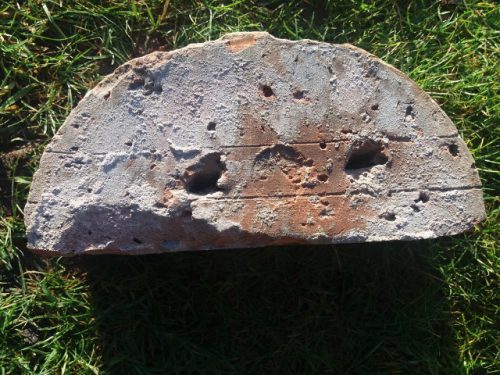