Parkhead History – Probably influenced by the availability of brick and tile, William Steven, one of Glasgow’s early tenement builders, set up business at Vinegarhill Street.  Silverdale Street in Parkhead was previously known as Steven Parade, and William Steven’s initials can be seen set into the stonework of the tenement on the corner of Silverdale Street and London Road.

01/05/1848 – Glasgow Herald – Three Hundred Thousand bricks for sale by public roup on Thursday 4th May. Mr Keith begs to intimate that he will sell by peremptory sale on Thursday the 4th May on the premises occupied by Mr McDiarmid & Co, Vinegar Hill, Camlachie Toll, Gallowgate betwixt two and three hundred thousand bricks consisting of hard and soft with a quantity of bullies.

(Note – SBH – The 2 entries above concerning McDiarmid may or may not be directly related to the Vinegarhill Brickworks).

1849 – 1850 – William Steven, brickmaker and builder, 48 Nelson Street, Glasgow. (Note – SBH – I am uncertain if this reference relates to the Vinegarhill Brickworks but the date would fit as the premises were up for sale in 1848 and William Steven certainly operated the works in the 1850s).

04/08/1856 – Glasgow Herald – Notice. All parties having claims against the estate of the late Walter Malcom (Malcolm?) Buchanan, Brickmaker, Vinegarhill, Camlachie and Mossbank, southwest of Govan and residing at Landell Place, Paisley Road near Glasgow are requested to lodge the same, duly authenticated with the subscribers, for the trustees under Mr Buchanan’s trust deposition and settlement on or before 9th October next …

02/01/1866 – William Guild died on 02/01/1866, unmarried. leaving a trust disposition and settlement and two codicils, dated respectively 20/08/1861, 13/07/1863 and 21/12/1865. Marion Guild or Learmonth, Janet Guild and Beatrice Guild or Lyon were the only sisters of the truster and were aged respectively 61, 64 and 50. Mrs Learmonth had no children. Under the disposition and settlement, the trustees were directed to hold the residue of the truster’s means and estate for behoof of the parties therein mentioned and divide the same, inter aliainter alia, to the extent of one fifth to each of the sisters for their liferent use allenarly. Besides personal property, which was insufficient to pay his debts, the truster’s estate consisted of heritable property at Camlachie, in the municipality of Glasgow, comprising feu duties, dwelling houses and about 12 acres of land, in which there existed near the surface a thick stratum of clay. Part of these 12 acres had been let for the purpose of excavating the clay and had been wrought by Mr Hodge, brickmaker, Glasgow from 1845 – 1855. From 1855 to 1864 Mr Guild, the truster, wrought and used the clay in the said part of the 12 acres for brickmaking and shortly before his death, but before the execution of the last codicil, he gave up brickmaking and let the clay in the said portion of the 12 acres to William Steven, brickmaker, Glasgow for 10 years from Candlemas 1865. The extent of the brickfield was about 15,000 square yards. Another part of the said 12 acres, extending to about 31,000 square yards had been wrought as a clay field from 1854 first by Hodge and MacDonald for about 10 years and afterwards by Hodge and Son under a new arrangement made by the truster with them, for a lease of eleven years from Candlemas 1964. The arrangements above mentioned were made by binding missives between the truster and each of the tenants, but no formal lease had been executed prior to the truster’s death. Formal leases were subsequently entered into between the trustees and the tenants in implement of the said missives. The lease to Messrs Hodge and Son provided for a fixed rent of £150 per annum, payable whether the clay was worked or not, with a lordship for all bricks made exceeding 3 tables or 1,650,000 bricks per annum, in the proportion which that number bears to the fixed rent of £150. Mr Stevens lease was in similar terms, the fixed rent being £120. The gross income of the residue of the estate was about £750 per annum, about £270 of which was derived from the brickfields. The remainder was made up from house rents and feu duties. There were bonds over the property and the nett income was about £400 per annum. The brickfields were said to be steadily rising in value. The trustees had no power to sell any part of the heritable property till the testator’s young nephew or niece alive should have attained the age of 21 years which could not be the case until December 1874. At the time of the testator’s death, the fair value of the ground let to Mr Steven and Messrs Hodge and Son was £4600. Its present fair value was 6s per square yard subject to a deduction of 30 %, in consequence of the rubbish filled into the excavations not having yet become sufficiently consolidated to sustain buildings. The truster was in the habit of furnishing returns to the lands valuation assessor, in which he stated the annual value of the brickfields at the fixed rents payable by his tenants. The rents appeared in the valuation rolls as the annual value of the brickfields and on this valuation, the testator paid taxes … (William Guild was formerly of Whitevale, Glasgow).

02/06/1875 – North British Agriculturist – On Monday a tramp, named Henry Devlin, was found lying in an unconscious state in front a brick kiln in Steven’s Brickworks, Camlachie and immediately removed to the Infirmary, where he was found to be in so weak a condition that his recovery is considered doubtful. He appears to have lain in front of the fires all night, and to have inhaled a large quantity of the noxious gases emitted by the coal.

Below – 17/09/1879 – Glasgow Herald  – Stevens, brickmakers and builders, 481 London Road selling land at Springbank, London Road and Vinegarhill all in Glasgow.

Below – 1892  – Vinegarhill, Glasgow. I cannot find a map with Vinegarhill Brickworks marked thereon. 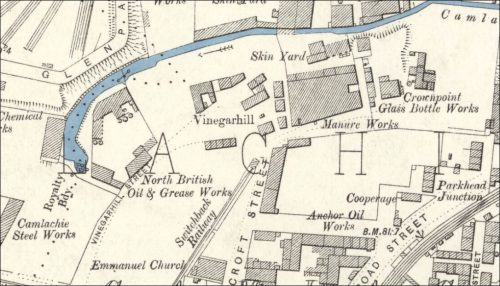