Crosshill Brickworks, Crosshill, Glasgow aka Myrtle Park Brickfield, Crosshill. (Note – SBH – I think these were one of the same. If any can confirm or deny then please get in touch). 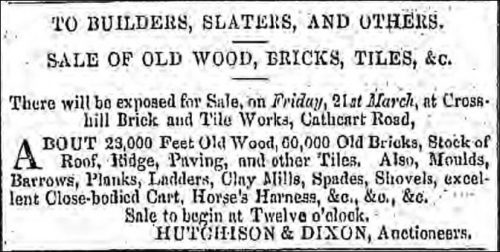 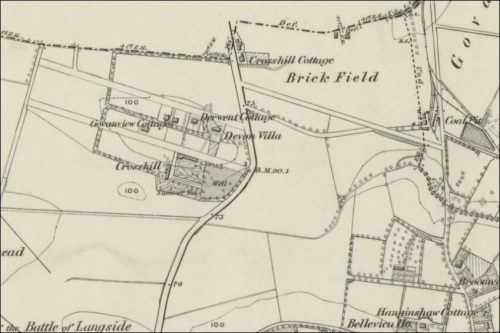 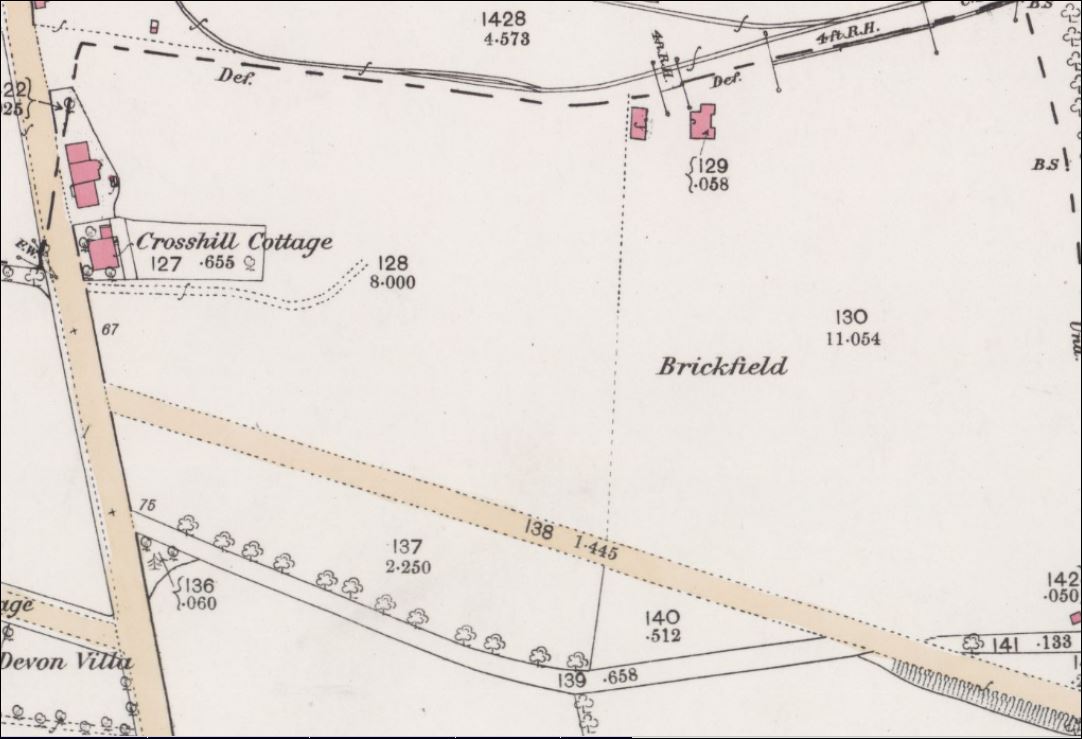 Prior to 1861 – Mr Allan Senior was in partnership with Mr John Mann at Crosshill Brickworks.

12/02/1861 – Hugh Allan started a business for himself at Crosshill Brickworks.

The bankrupt deponed. I am 59 years of age. I commenced business on or about 12th February 1861, shortly after my father’s death. I had been previous to that date in the employment of my father. My partners were my brothers David, James and Archibald Russell Allan. Our business consisted of the manufacture of common bricks, white bricks, fire bricks, glazed pipes and building and contracting. At that date, we continued in our own names the business which had previously been conducted by our father for some time before his death by himself alone and in the partnership with the late Mr John Mann. John Mann died a good number of years prior to 1861 and from the date of his death, the business had belonged to my father. The salary which I had received from my father was £90 per annum for several years prior to his death. In addition to the above sum, my father provided me with a free house and coal. My brothers and I had no written contract of copartnery. We did not succeed in adjusting terms. I considered the terms proposed on my brother’s behalf to be too favourable for them. I insisted upon a condition that I should have £300 per annum salary as the managing partner before a division of profits was made. My brothers repudiated such a condition. In my opinion that was a fair and reasonable allowance for my services. My brother David did not at any time take part in conducting our business. He was for some time an invalid and otherwise, he was engaged with Mr Dixon of Govan Colliery. James took charge of the pottery department at Rutherglen chiefly and he took a general charge of the machinery. I considered that Archibald Russell Allan took no part in the management of the business. He succeeded my brother David as the manager to Mr Dixon and I believe his time was fully occupied with his duties as colliery manager to Mr Dixon of Govan. He left that situation shortly before our partnership was dissolved. There was no provision or agreement between my brothers and myself when we commenced business together as to the amount of our drawings from the business from time to time. I continued to draw from the business such sums as I required just as I had done during my father’s life. There was a cashier who kept the books of our firm and all my drawings were regularly entered by him. I have been married for nearly 30 years and have a family of twelve of whom two are dead. During the period of our partnership, I was engaged in no speculations on my own account nor was I engaged in any other business. I had no other source of income than the drawings from our business. I expended the whole of my drawings on my family in maintaining and educating them. I cannot at present moment give the exact average expenditure from year to year but on looking at a statement of my drawings see that from 1861 to 1864 my average would be £400 per annum and from 1864 to 1869 about £700 per annum. The public books of the firm were balanced annually, but these did not show the state of the partner’s accounts nor the capital account. These books showed all my drawings, and for a certain period, I think, also the drawings of my brother James; but the drawings of my brother Archibald, if he made any drawings were not shown in the books. For nearly 40 years our business was conducted under the name of Allan & Mann. Prior to my father’s death, David Lockerby was the manager and I kept the books and took a general management of the business in concert with Mr Lockerby. who knew certain matters connected with the building department better than I did and I knew other matters connected with the manufactory better than he did. In any new affair or difficulty, we consulted Mr Mann or my father but neither of them took the immediate oversight of the business. After my father’s death I considered myself the acting manager of the business. Our firm was dissolved on account of the interference of my brother Archibald. He said that I was extravagant and from other remarks which he made we considered it better to dissolve our business connection. A minute of dissolution was signed on 11th November 1869 and upon a strict accounting under the partnership, it was alleged by my brothers that I was indebted to the partnership in a large amount. I was summoned by them and stated defences to that action but acting under the advice of my counsel and agents, the action was compromised. I was unable to be the amount which was found to be due and I have not paid it yet. I assigned to my brothers in security of the due payment of that debt the reversion of my house at Crosshill and my interest in my father’s estate and in that of my brother David, shortly after the settlement of that action. It was decidedly part of the arrangement and for settlement of the action that I should so assign my interests in these estates. Under my father’s settlement have an interest along with my brothers and sisters and I have also an interest in the estate of my brother David and I also have an interest in my mother’s estate under her settlement. I could not at present definitely state the precise value of my interest in any of these estates. The state of affairs submitted by me to the first meeting of creditors is accurate to the best of my knowledge and belief. I believe I have given to my trustee all the information in my power concerning my estate.

Examined by Mr McFarlane – I think a proposal was made on the death of my father by some of the trustees to my brother and myself to the effect that we should take over the business of Allan & Mann of which the testator was the sole partner. As near as I can remember we were to pay the sum of £10,000 for the business. At the date of my father’s death in 1961, I was indebted to him for upwards of £550. At the date of my father’s death, I was possessed of no estate or property whatever except my household furniture which might then have been worth £100. I have no recollection of my brothers and myself granting any document of debt for the £10,000 and I am not aware whether any document was granted by Allan & Mann. At the date of the dissolution of the partnership between my brother and myself the accounts made out by Mr Hutton, the liquidator showed that I was largely indebted to the firm and  I was not possessed of any means to buy over the business. The business was disposed of under the liquidation, in terms of articles of roup, whereby it was provided ?” that it was to be a sale by auction among Hugh Allan, James Allan and Archibald Russell Allan”. Interrogated – Seeing you were not possessed of means to purchase the business why did you not insist upon the sale being made by public auction. Depones – I did so under the advice of my agents Messrs McGrigor, Stevenson and Fleming. My brothers were the only partners who had the opportunity and were able to purchase the business. They did purchase the business at the upset price of £4500. The dissolution of the firm, as far as I know, was not advertised in the gazette or notified to the customers of the firm to my knowledge. Interrogated – Why did you grant an assignation of your estates, excluding the household furniture, in favour of your brothers when you had creditors. Depones – I did it under the advice of my counsel and also because my brothers had arrested, on the dependence of the action, my interest in the above estates. How do you account for the great increase in your drawings from  £300 in 1861 to £1000 in 1868? Depones -I considered that I had a right to it and I expended it on my family and in repairing my house and in purchasing additional furniture. My mother’s income might safely be set down at £900 per annum. I could not say whether my mother expended that amount yearly but I received no portion of it nor any assistance from her. I am quite in the dark regarding the amount left by my mother. Since the dissolution of our partnership, my brothers have paid the executors of my late father the debt due to the estate for the price of the business being about £10,000 as above explained. I know this as one of the trustees of my late father. My brothers assigned to one of the banks in Glasgow their interest in my father’s estate and my impression is that they on the security thereof obtained the means to pay the trustees the said £10,000 and the assignation was intimated to my father’s trustees. The law agent, Mr J. M. Roberston, I think will have a copy. The diet was adjourned.

20/04/1877 – North British Daily Mail – Suburban burghs. Crosshill – new works in the vicinity. Several works have just been begun in the near neighbourhood of the burgh, which will add nothing to its salubrity. At the eastern extremity of the road leading directly from Queen Mary’s Avenue, in the low grounds below Mount Florida, a large brickfield is commenced by Mr Allan Mann, (Allan and Mann?) and another in close proximity by Mr Hugh Mclntyre. With those already established on the opposite side of the Polmadie Road, the inhabitants of Mount Florida, particularly in the east end, will certainly have the full benefit of the undesirable fumes when the kilns are lighted, whenever the wind blows from the eastward, which is generally about a third of the year. Another brickwork is in course of formation by Messrs Gilchrist & Goldie, who have long carried on this business at Sandyacres, on the old Langside Road. It is situated on Coplawhill, close to the east side of Victoria Road and immediately south and to the rear of the Victoria Swimming Baths. The lands are the property of the Glasgow Corporation, and were for many years occupied by Messrs Austin & McAuslane as a part of their nurseries, but have been leased by the above firm, who are at present erecting an engine-house and other necessary buildings for prosecuting the work. It was imagined that feuing for house-building would have begun there before now, but the formation of this work must postpone such for an indefinite period …

10/04/1885 – Glasgow Herald – Red brickwork to let at Myrtle Park, Crosshill. Brickmaking can be commenced at once. Apply to Allan and Mann, 48 St Enoch Square, Glasgow.

19/04/1886 – Glasgow Herald – Red brickwork to let at Crosshill, Glasgow with machinery, plant etc in working order. Nearly a season’s make of clay being raised, brick making can be commenced as soon as weather will permit. Apply to Allan & Man, 48 St Enoch Square. (Still for sale 05/05/1886).

Below – 02/04/1887 – Hamilton Advertiser – Myrtle Park Brickfield, Near Crosshill for sale. Allan and Mann. 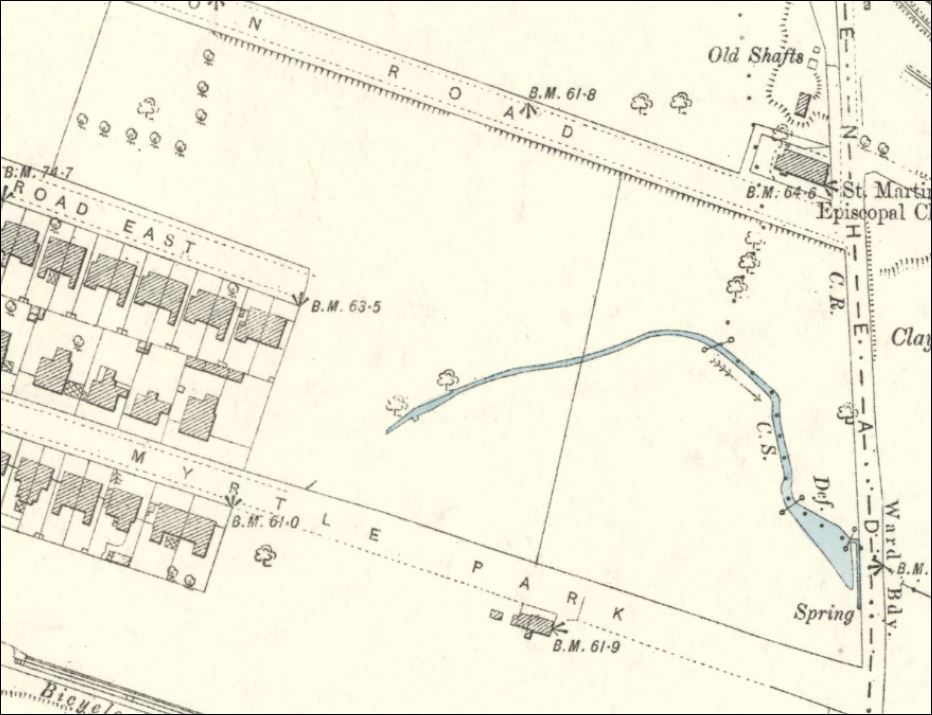