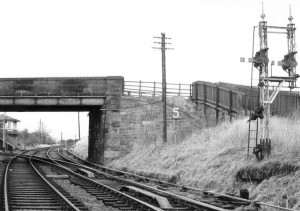 ‎It was in operation from the late 18th century (before 1797) and transported brick from a harbour located on the Forth near the works. It seems to have ceased operation in 1916.

30/04/1804 – Caledonian Mercury – To be let land including the tileworks at Throsk presently owned by Mr Deas, lying close to the Forth and possessing the advantage of a wharf upon the river where the tiles can be shipped with convenience.

31/10/1844 – Ayr Advertiser – Tile Draining – We understand that Mr Murray of Polmaise who was the very first to introduce drain tiles into the district twenty years ago, and who all along has exhibited a warm interest in everything connected with agricultural improvement, has introduced a new pipe drain tile, which is expected will be much more economical, convenient and equally if not more efficient than the tile at present in general use. On Monday the 30th ultimo, the Earl of Stair, accompanied by Mr Murray, paid a visit to the brick and tile manufactory of Mr Thomas Jeffrey at Throsk where they had the opportunity of witnessing the manufacture of these tiles. His Lordship expressed himself highly gratified with their construction and appeared to take a deep interest in the operation, at the same time intimating the pleasure he experiences in witnessing the admirable arrangements displayed in the management of these extensive works. 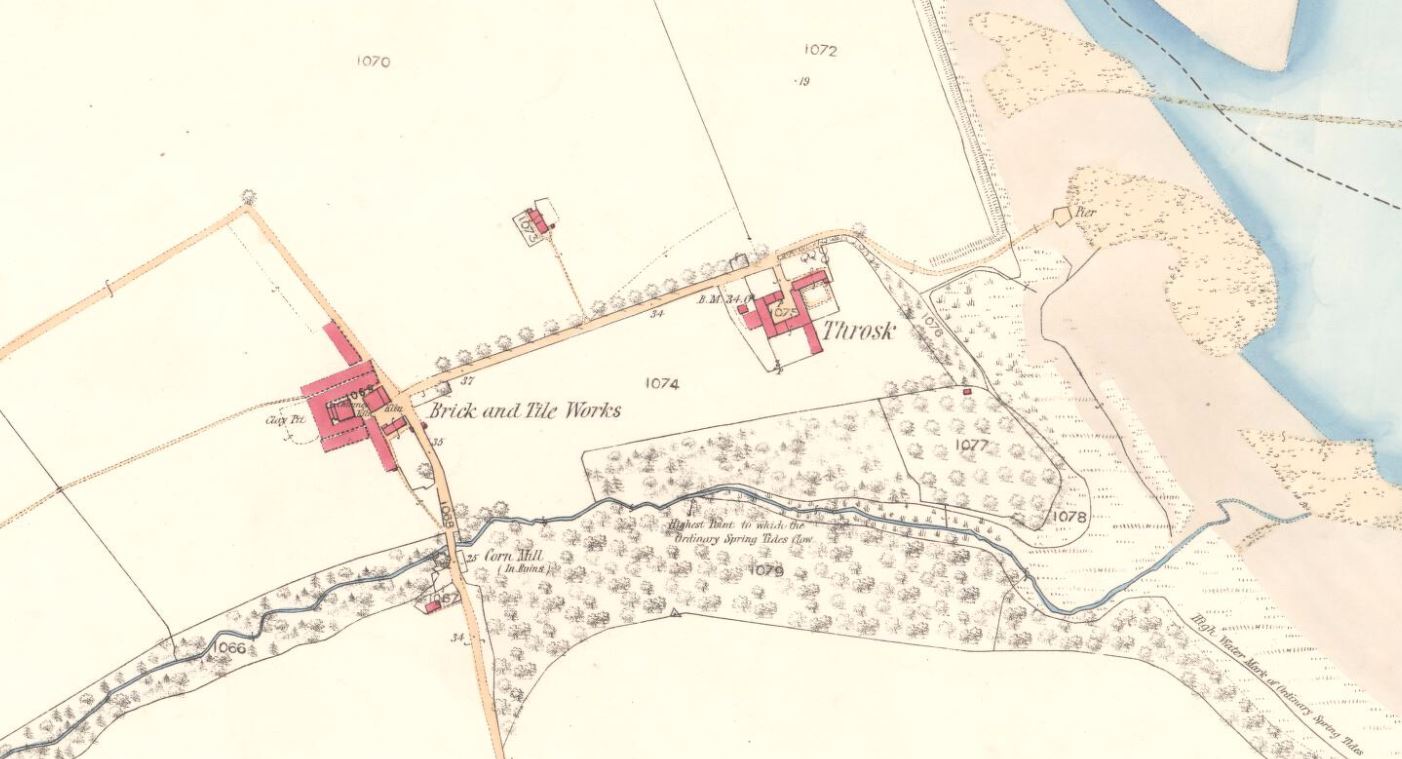 31/10/1868 – Alloa Advertiser – Extensive displenishing sale of horses, cattle, crop in stacks, implements of husbandry and also brick and tile makers tools, tables and barrows and a large number of planks etc on the farm of Throsk as possessed by Mr Thomas Jeffrey.

Below – 02/09/1871 – Alloa Advertiser – Sale of machinery at Throsk Brick and Tile Work – the property of George Pitkethly Smith, Brick and tile maker there. 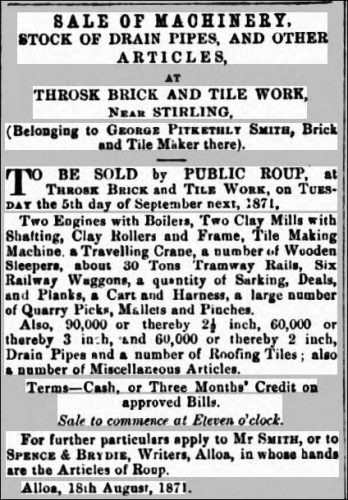 29/02/1888 – North British Agriculturist – Farm to let on Throsk Estate. The farm of Southmains of as lately possessed by Mr John Allan is to let on lease, with immediate entry. The farm is distant about three miles from Stirling. For further particulars apply to Mr William Finlayson, Throsk Brick and Tile Works, Stirling, who will point out the boundaries …

The above is a very interesting read. Click me

“In 1611 James Pook, son of John in Throsk, contracted to marry Margaret Buchan daughter of John in Lower Polmaise, Charles Pollock, the groom’s brother, being a witness.13 The Pollocks’ sale of bricks for ovens in Stirling Castle is noted by Caldwell & Dean (1992)”

and “Apart from the ‘tyles’ supplied by the Pollocks in the early 17th century, the earliest record of bricks being used in Stirling is from 1721 when John Matson supplied 600 bricks for building a chimney in Stirling. By 1746 Andrew Wood was taking clay from the clay holes beside Stirling for making bricks and there are two records of bricks supplied in the town in 1746 and 1747, one lot specifically supplied by Wood. Around 1742 John Matson, potter in Throsk, had bought a house in Stirling from Andrew Wood, providing a direct connection between them (Renwick 1889, 283). A red-tiled house is recorded in Stirling in 1739 but there is no record of its age nor the source of the tiles (Renwick 1889, 248, July 1739). By 1804 William Deas, who had occupied the mansion house of Throsk since 1799, leased a brick and tile works at Throsk from Cunningham of Balgownie. That was clearly a fully-industrialized concern and later records suggest that it also made pots.”

“There is no indication whether the late records refer to a persistence of the traditional industry or whether more modern methods were introduced. Only with the creation of the Brick and Tile Works at Throsk, prior to 1804, do we have unequivocal evidence of a fully industrialized and capitalized concern. That lasted for over a century and Fleming (1923, 203) suggests that it continued to produce ‘the usual domestic jars, tubs, bowls and milk pans”

“John Matson had diversified into bricks by 1721 but would have faced competition from Andrew Wood for the Stirling market after 1746. Numbers of workers involved appear to have continued to rise through the first half of the 18th century. Does that rise perhaps represent an increase in demand for their traditional product as driven by factors which also stimulated the more modern industry which was so soon to displace them?”