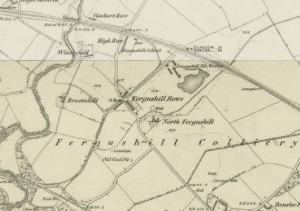 This article is reproduced by kind permission of Chris Hawksworth.

Fergushill Tileworks – A short-lived industrial concern on the Eglinton Estate The early part of the nineteenth century saw the widespread introduction of underground field drains in an attempt to improve agricultural productivity. Landowners were encouraged to improve drainage by the publications of the Royal and Highland Agricultural Society. Legislation allowing landowners to raise capital for land improvement, the removal of the tile tax in 1839, and Peel’s Land Drainage Act of 1845 all helped to increase the use of field drains. As the field drain tiles were heavy and expensive to transport, they were often produced on estates and used locally. The first tilework in Scotland was on the Duke of Portland’s estate at Cessnock, Ayrshire, in 1826. By 1845, the New Statistical Account for Ayrshire reported there were 14 tileworks in the county.

Tile production was a seasonal affair, with winning the clay occurring in autumn. It was left to weather until spring, then dug over, moistened, and covered with straw. In the summer, the clay was softened by mixing with sand and then moulded. The moulded tiles were slowly dried to prevent distortion, then fired in a kiln. Early drainage tiles consisted of an inverted horseshoe-shaped tile which sat on a flat plate-like ‘sole’. These were superceded after 1843 by cylindrical drain pipes. (1)

Fergushill Tileworks was built in 1831 at North Fergushill farm on the Eglinton estate. The tileworks probably consisted of a moulding room, kiln and drying stores. The site of the Tileworks is in a field just to the east of an unclassified road between North Fergushill farm and the now disused Dalry to Kilmarnock railway line (Grid reference NS436333). It is shown on a plan of Fergushill Farm from 1841. (2) and on the 1855 First Series Ordnance Survey 1:1250 map Ayrshire sheet XVII.

Vouchers in the Eglinton depositions at the National Archives of Scotland reveal some of the expenses incurred in its construction between June and September 1831. (3) The 500 firebricks for the kiln were purchased from James Murray’s Firebrick and Grinding works at Port Dundas, Glasgow, at a cost of £1/15/- plus 2/- for cartage to Broomilaw. They were then shipped to Ardrossan or Saltcoats whence a David Andrews carted them to Fergushill for 13/- plus 1/- for the toll at Saltcoats. This same David Andrews was also paid £12 for ‘mason work’ at the brickworks. A further £33/10/- was paid to James Majors and Co for moulding and firing 33,500 bricks, presumably for constructing the other buildings at the tilework. Majors also submitted a bill for £4/9/8, ‘being the amount of days wages due to my labourers for levelling the brickfield, opening the clay pit and raising fireclay, for making bricks for the kiln and the erection made here’. The levelling of the brickfield also required 29 carts of sand for which William Ronald, a local farmer, was paid £4/9/-.

A Thomas Baird was paid an unknown amount ‘for sawing timber for the sheds at Fergushill pottery’ and a John Sinclair received £3/8/4 expenses ‘in respect of clay machine for the pottery at North Fergushill, for going into Glasgow sundry times including coach fare and expenses’ The first manager of the Tilework appears to be a Hugh Bunton or Buntine.

Bunton probably lived at the adjacent Tilework Cottage where he had a 3’ x 2’ window put in by a John Wallace in 1835 at a cost of 13/6. (4) Vouchers from the Earl of Eglinton’s factor for tiles from Bunton reveal that over the period from September 1836 to the end of 1837, the Eglinton estate purchased between 5,000 and 10,000 tiles per month for use on its farms. There are various other vouchers for expenses incurred in the running of the tileworks, including 14/- for ‘stones for steps at the large kiln’, spades, shovels, iron wire, nails, and timber ‘for holding an 80-foot screen at the tilework’. (5) This latter was presumably a screen at the drying shed, which may be the long thin building on the 1855 map.

1831 – Fergushill Tileworks was built in 1831 at North Fergushill farm on the Eglinton estate.

01/10/1845 – Dumfries and Galloway Standard – At Fergusshill Tilework, parish of Kilwinning, twenty-four thousand tiles per day can be made by a single-acting machine attended to by five men. The machine was made by Mr James McNab, Old Toll, Ayr. The clay receives no more preparation than it did previous to the adoption of the machine at the tilework.

1855 – 1857 – ScotlansPlaces – Fergushill Tileworks. (Disused) – This name is applicable to the several sheds erected for the better convenience of tile making. They are now in a decayed state. The works having for some time been suppressed. The property of Mr Archibald Finnie. 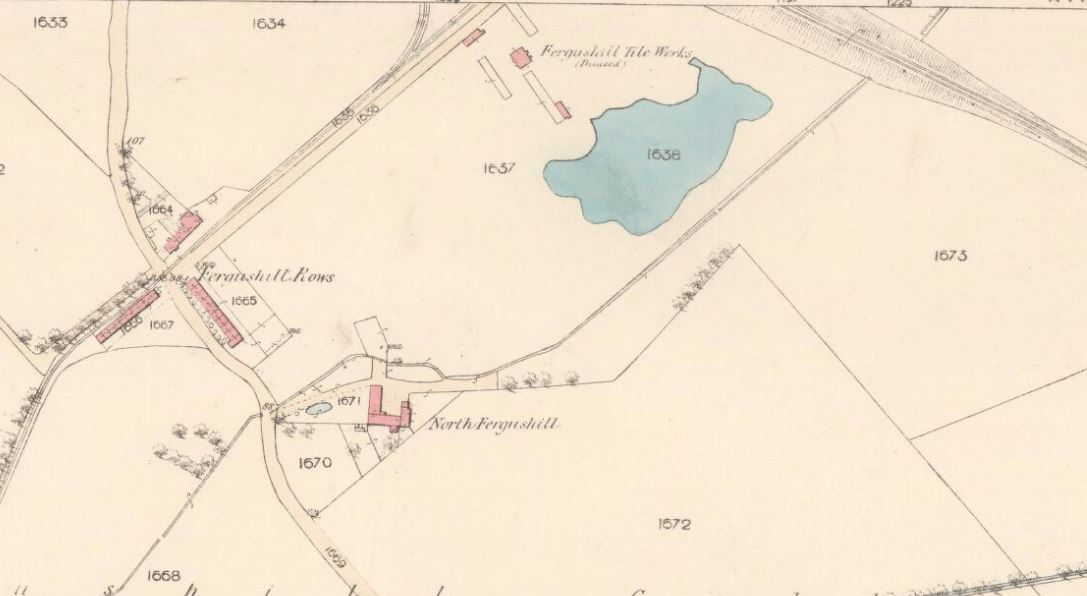 Bunton must have given up the tileworks as he was not living there in the 1841 census. Indeed, none of the occupants of Tilework Cottage in the 1841 or 1851 census were apparently employed at the tileworks. James Howie, the tenant of the adjacent North Fergushill farm, probably took over running the tilework from Bunton. The abstract of accounts for Drain Tiles at Fergushill Tilework for seasons 1846 and 1847 shows they were ‘made and sold by James Howie, Contractor’.(6)

The abstract of accounts divides the accounts into tiles sold to tenants of Lord Eglinton, tenants of Lady Montgomery and ‘strangers’. James Howie of Fergushill, John McGill of Moncur, William Kidd of Auchenwhinsey, James Douglas of Benslie, Robert Thomson of Woodneuk and James Kirkhope of South Fergushill were all Lord Eglinton’s farm tenants local to the tilework. The other tenants who purchased tiles were widely distributed throughout his Ayrshire estates. The ‘strangers’ included the Ardrossan Railway Company, Perceton Railway Company, Archibald Finnie Esq. (Fergushill Colliery) and Archibald Kenneth (Eglinton Colliery). The Earl of Eglinton had a financial interest in the Ardrossan Railway, and both Finnie and Kenneth leased the mineral rights for their collieries from Eglinton. It is apparent from the accounts that the tileworks was also involved in the production of bricks, albeit on a smaller scale. The output and sales figures for 1846 and 1847 are shown in tables 1 to 3 in the appendix. The tiles were available in four sizes but their exact dimensions are uncertain. Douglas and Oglethorpe suggest they were up to twelve inches long.

The fate of the brickworks is revealed in the memoranda from George Johnston, the Earl of Eglinton’s factor, to the Earl’s Commissioner, Mr Gairdner. (7) By the end of 1852 demand for tiles had fallen considerably, yet production carried on at the same rate. Johnston noted there were 480,000 unsold tiles stored at Fergushill and there was no room for the next year’s stock. This figure represents more than half the annual output, based on 1846 figures. Johnston suggested selling off the stock cheap and trying to let the works, but Gairdner told Johnston to encourage the sale of tiles to the public rather than just tenants. It was noted by Gairdner that Mr Finnie had exactly the same problem at the tilework at his ‘new pit’, although which pit he was referring to was not stated. Eglinton’s tilework at Corsehill, Dreghorn, also had the same problem with about one million tiles unsold. (8)

The following autumn, Johnston noted that flooding of the pits made it virtually impossible to dig out the clay and ‘the expense of drainage would be fearful’. He felt the tileworks were a dead loss and continued production would only lead to more losses. This time, Gairdner agreed and ordered the works to be let to another tenant if possible. By the following spring, no tenants had been found despite advertising in all the county newspapers. As the store of tiles was not diminishing, Gairdner ordered a sale at a 20% discount, but to no avail. In April 1855, Johnston wrote regarding Fergushill Tilework, “As there is not the slightest prospect of getting this work let, nor is there much inducement from the appearance of the field to induce anyone to engage with it, I would be disposed to recommend a sale of all the material of the sheds together with the engine and boiler. They may bring something now, and if allowed to stand much longer they may decrease in value or disappear altogether.” Gairdner agreed and the works were dismantled and sold off piecemeal. The engine was valued at £28 – £30 by the local colliery manager, Mr G Miller. (9) The 1855 OS map notes the tilework is disused.

The following year an allowance of £35 was made by Eglinton’s estate for levelling and trenching the tilework field. (10) It was hoped that this would reduce Mr Howie’s claim for damages by about at least a half. Howie was the tenant of North Fergushill farm in whose field the tileworks and claypit stood and had presumably claimed for a reduction in his rent because of damage to his field and loss of productive land as a result of the flooding of the claypit. He had been involved in the tileworks as ‘contractor’ from 1846 and had kept accounts and notes of sales on behalf of the estate but had not been paid for this, unlike the other tilework contractors on the Eglinton estates such as Corsehill.

In summary, the Fergushill Tilework was developed in response to a demand for drainage tiles on the Eglinton estate. The development of competition in the form of larger tile and brickworks associated with the expanding Ayrshire coal mines and the fall in demand for drainage tiles lead to the demise of the tilework in the mid-1850s. There is now no obvious sign of the tilework buildings. The clay pit which proved so difficult to drain is now a large pond, home to ducks and other waterfowl, and Tilework Cottage is a privately owned house.  – Chris Hawksworth 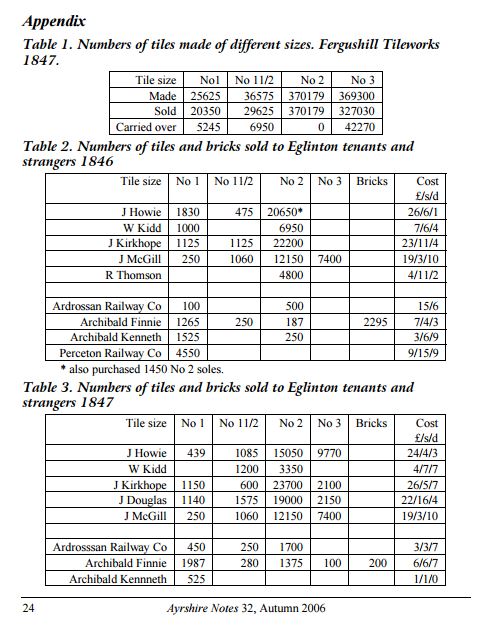 Below –1890 – Fergushill Tileworks – The buildings are still marked but the Tileworks may well have been long abandoned by this time. 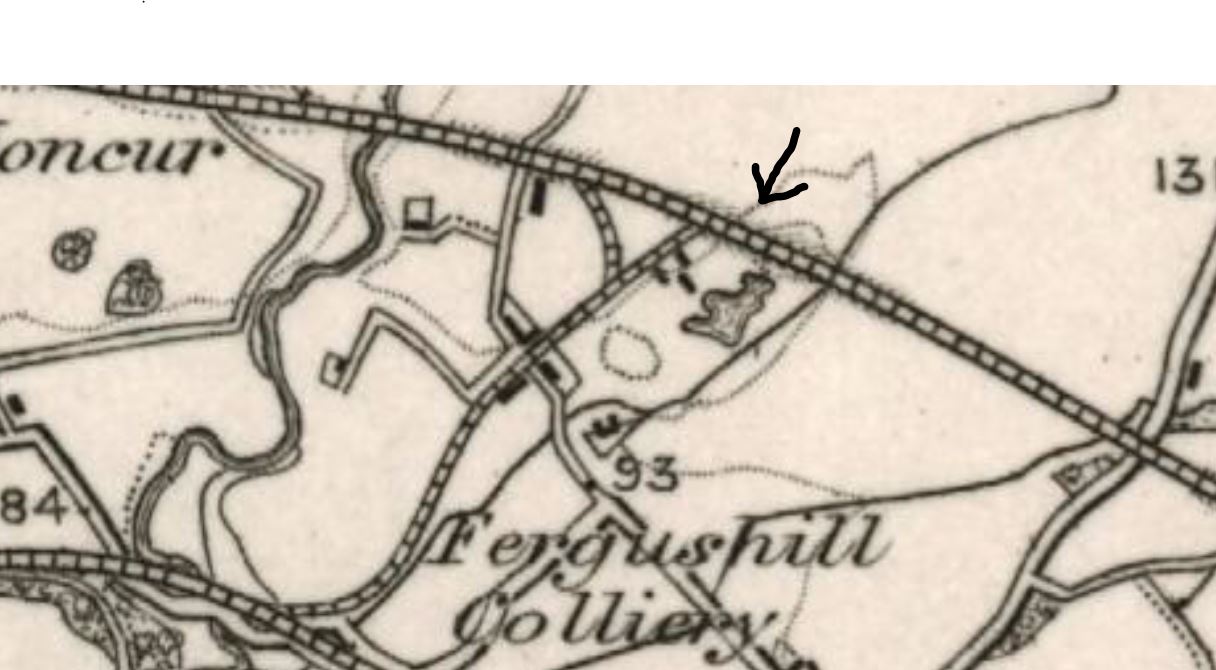