c.1937 – 1960s – The 1985 publication ‘A survey of Scottish brickmarks’ suggests that Keir and Cawder Ltd operated the works during this period.

24/07/1937 – Milngavie and Bearsden Herald – Busy brick workers. Employees of Messrs Keir and Cawder. Ltd, Bishopbriggs engaged at the firm’s Crofthead Sand Quarry, Bishopbriggs; Rusheyhill Whinstone Quarry; Summerston Brickwork, Summerston; Bishopbriggs Brickworks, Bishopbriggs, also the transport workers are being granted four days’ holidays with pay at the Fair. Key men whose services are retained during the holidays are being paid double time for the period in lieu of loss of holidays. Two hundred employees will participate in this concession. Owing to the orders on hand and the demand for bricks, employees of Cadder Brick Company, I.td., Balmuildy Road, Bishopbriggs, are not being granted holidays, but are receiving double pay for three days, this being the recognised period of holidays. About 50 workers are affected.

Below – 1938 – The site of the Summerston Brickworks as pointed out by Andrew Gemmell. 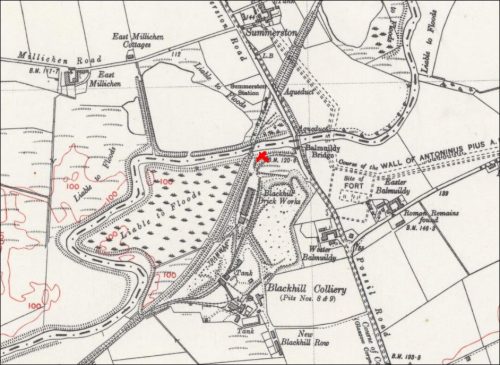 09/10/1948 – Milngavie and Bearsden Herald – Two accused of hold-up. Two men appeared in Maryhill Police Court on Monday, on a charge of having on September 24, 1948, while acting in concert with two other persons meantime unknown, in an office occupied by Keir and Cawder Ltd, Summerston Brickworks, Balmore near Milngavie, assaulted a woman and robbed her of £200 of money. The accused were remitted to the Sheriff Court for trial.

15/03/1952 – The British Clayworker – Scottish Brickworks Fire – The Summerston Brickworks of Keir and Cawder Ltd. of Glasgow were seriously damaged in a fire which occurred last month. The blaze is believed to have resulted from a spark, which fired the machine shop and then swept through the works. Output was brought to a halt as a result of the blaze. Keir and Cawder Ltd. are meeting demand by drawing on other brickworks in their group.

c.1960 – 1969 – The 1985 publication ‘A survey of Scottish brickmarks’ suggests that the Alexandra Transport Company operated the works during this period.

c.1969 – 1978 – The 1985 publication ‘A survey of Scottish brickmarks’ suggests that the Scottish Brick Corporation operated the works during this period. 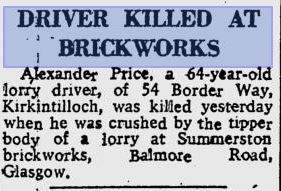