Stepends Brickwork was situated in the village of Plains 2 miles East of Airdrie on the Bathgate Road. It used the waste from the Ardenrigg Colliery. Ardenrigg Mine lay up in the hills above the Lily Loch toward Salsburgh, the output of 77,000 tons per annum of Anthracite Coal was carried by overhead Tramway down to Stipends Colliery on the edge of Plains and next to the Railway. The Stepends Colliery had a Coal Washer which served both Mines. The Coal dust and Dross from this Washer was utilised in Brick making onsite as a method of disposing of the Mining Spoil. These Bricks were stamped “Stepends” Both Ardenrigg and Stipends can still be accessed by road and the Farm on whose land both mines and Brickworks stood still exists.

The Ardenrigg Coal Co, coal masters, Plains, near Airdrie, North Lanarkshire, Scotland was established by John Gardner and John Gemmell in the late 19th century. In 1925, the company was incorporated as the Ardenrigg Coal Co Ltd with a share issue of £10,000 in £1 shares. This was increased by a share issue of £11,000 in 1930. The Coltness Iron Co Ltd, coal and iron masters and steel and brick manufacturers, Newmains, South Lanarkshire, acquired a 95 per cent share in the company as part of its policy to acquire small pockets of undeveloped coal in the area. By 1946, the company had two mines sunk – the Upper and Lower Drumgray seams. The company was nationalised as part of the National Coal Board in 1947 under the terms of the Coal Industry Nationalisation Act 1946.

Below – 1935 – Showing the relationship between Stepends Brickworks and Ardenrigg Colliery. Click on the 1935 link and note the ‘aerial cable’ joining the two sites. 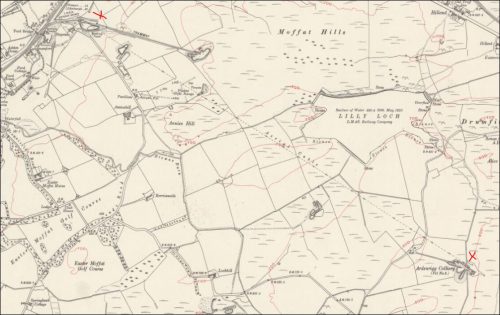 c.1937 – c.1947 – The 1985 publication ‘A survey of Scottish brickmarks’ suggests that the Ardenrlgg Coal Company operated the works during this period.

12/06/1937 – Airdrie and Coatbridge Advertiser – New brickworks for Plains Airdrie and district are sharing in the brick-making boom caused by an unprecedented demand for building material which is being made at the present time. The Airdrie Brickworks are extending their works in order to double their present production, and a new brickwork, to cost about £15,000 is being constructed at Stepend Colliery, Plains.  At Rawyards Brickworks, the oldest brickworks in the district, Messrs Alex. Frew and Co., Ltd., are working to capacity to meet orders from many parts of the country. The Plains Brickwork is being constructed by the Ardenrigg Coal Company and will make use of pit refuse at Stepend Colliery. When completed, the works will be able to produce as many as  20,000 bricks per clay. It is expected that the new works will give employment to about 50 men. Builders are at present engaged the construction of the kilns and other plant, but they will not be ready for use for a few months yet. Mr A. S. Smith. manager of the Airdrie Brickworks told an “Advertiser” reporter what the effects of the extension being made to the works would be.  At the present time, there are 26 kilns in operation giving a weekly production of 16,000 bricks. The extension, which includes extra milling plant, will provide 18 more kilns and it is estimated, will bring the weekly production up to 320,000 bricks. The Airdrie Brickworks were only started about 17 months ago and production was not commenced until four months later. When the extension is completed two or three months hence about 65 men will be employed at the works. The clay brick process is used at those works and it is considered that there is sufficient pit refuse at the Howlet bing to supply them with material for about 20 years. The works are at present busily engaged fulfilling contracts for Newcastleton, Perth, Edinburgh, Dundee and other parts of the country. A number of exceptionally good contracts have been secured by Messrs Alexander Frew & Co., at the Rawyards Brickworks. Their capacity of 170,000 bricks per week is fully taxed, and the hundred men employed there are likely to be kept busy for many months yet. The Rawyards Brickworks specialises in the making of clay facing bricks used in the construction of schools, housing schemes, and factory buildings. At Dumbarton, two monuments of their work are being built in the Blackburn Aircraft Factory and the distillery being erected for Messrs Hiram Walker & Co., Ltd. More than three million bricks are required to those two contracts. The firm has also supplied bricks for the building of the new engineering shop of Messrs Hastie, Greenock.  They have also secured contracts front the local authorities of Glasgow,  Airdrie,  Greenock, Port Glasgow, Gourock, West Lothian, Bathgate and the County Council.  The works are equipped with a battery of  Hoffman’s Kilns, eight Newcastle Kilns, and four round downdraft kilns.

22/11/1937 – The Scotsman – Another brickwork for Lanarkshire – Lanarkshire is to have another new brick-work. The Ardenrigg Coal Co Ltd, Glasgow have intimated to the County Council that they propose to establish a brick making plant in the Bracco district and they will, in consequence, be transporting large quantities of materials over the Duntilland and Bracco highways to and from the site of the proposed Works. The County road surveyor, after a meeting with the Company, reported that they were prepared to make a lump sum payment of £500 towards the cost of repairing and maintaining the highways and in full discharge of any future liability. The offer has been accepted. In recent years brickworks have sprung up in many places in Lanarkshire. The bricks made are mainly composition manufactured from pit debris. A new plant at Leland is expected to commence production by the new year.

30/07/1938 – Airdrie and Coatbridge Advertiser – An article on Lanarkshire coalfields … Far away to the north on the other edge of the whin, at Stepends, the Ardenrlgg Coal Company are working both the Upper and Lower Drumgray in an anthracite condition. The pit was opened in 1915 and re-equipped with a long aerial ropeway: a brickworks to turn out 25,000 bricks a day is due to opening shortly …

02/03/1946 – Airdrie and Coatbridge Advertiser –  Social Welfare Department fraud. The accused was employed by the Ardenrigg Coal Co Ltd at their Stepends Brickworks, Plains.

c.1947 – c.1964 – The 1985 publication ‘A survey of Scottish brickmarks’ suggests that the Coltness Iron Company operated the works during this period.

05/08/1949 – Motherwell Times –  Motherwell, Wishaw and Bellshill firms on parade at Exhibition … Among the largest of the county exhibitors is the Coltness Iron Company Ltd., Newmains, which will display steel and iron castings, bricks and cement … The firm’s display will let the public and manufacturers see the various castings done at Newmains, the bricks produced at Mayfield and Stepps Brickworks (Stepends?!), and cement from the Newmains Works.

22/05/1964 – Wishaw Press – Change of title for Coltness Iron Company. New company to boost brick production.  Bold new plans for the future are announced this week By the Coltness Iron Company Ltd. The plans, aimed at putting the company in the forefront of Scottish industry, include a change of title, the formation of a new company to handle sales, the switch of headquarters from Newmains to Glasgow and a 75 per cent increase in brick production at the Morningside, Airdrie and Carluke brickworks.  The ” meet the future ” plans were announced at a Press Conference, which followed an extraordinary general meeting of the company, held in the Central Hotel, Glasgow, last Friday. Company chairman, Lt. Col. J. F. H. Houldsworth, announced the change of name. After 127 years the old title Coltness Iron Company Limited goes out. The new company title is COLTNESS INDUSTRIES LIMITED. A new company, Coltness (Sales) Ltd. has been set up to handle all the sales of Coltness Industries and group headquarters are to be moved from Main Street. Newmains, to a new building which is almost complete, Clive House, India Street, Glasgow. Brick production at Chapel Brickworks, Morningside, Mayfield Brickworks, Carluke and Stepends Brickwork Airdrie is to be stepped up by 75% which should result in the production of over one million bricks a week. The step-up in production has meant an investment of £150,000 by the company in new machinery. The plans will mean an additional 30 jobs at the Chapel Brickworks, Morningside, where a new kiln is being built and where production is expected to bump from 130,000 to 420,000 bricks a week in August. Referring to the change of name of the company Col. Houldsworth said: ” This is a natural step to take, especially as the company is no longer identified with iron and steel foundries or, indeed, coal mining although we are still proud to be of service to the N.C.B. through our subsidiary company, Beckett & Anderson who manufacture mining equipment.” Col. Houldsworth continued “We are now a well-diversified Scottish industrial company with widespread interests on Clydeside, in Stirlingshire and Lanarkshire manufacturing bricks, nails, central heating, mining haulage and marine winch equipment. Our total assets are over £1 million. We employ 400 people and we hope before long that through growth, development and diversification, we shall employ many more. I believe all the changes underline our belief in the future and our intention to think far ahead and plan accordingly”. Concluding, Col Houldsworth said,” I hope that what I have said indicates that Coltness Industries Limited are today 127 years young. We intend to keep it that way and we intend to play our part in the life and prosperity of Scotland. Coltness Iron Works were founded at Newmains, in 1837. In 1899 Coltness Iron Company became a public company. By that date, in addition to nine blast furnaces and iron and steel foundries, the Company owned 20 coal mines and pits in the counties of Lanark, West Lothian, Fife and Midlothian.
By 1930 the Company’s coal mining interests had spread to West Cumberland and Warwickshire. Following the nationalisation of the mines on 1st January 1947, the Company was left with its iron and steel foundries, brickworks and blast furnaces and cement works. Since then the management has sought expansion by diversification in various directions through the parent company and its subsidiaries. In 1947 Mayfield brickworks were built at Carluke and the following year Beckett & Anderson became a wholly-owned subsidiary. In 1950 Newmains Brickwork company was purchased and during 1952 the iron and steel foundries were sold. Eight years ago J. & W. Somerville became a wholly-owned subsidiary. In 1963 the blast furnace, cement works closed.
Below – 25/06/1970 – The Glasgow Herald – Coltness Brickworks – Mayfield, Newmains and Stepends – “Coltness for Service”

Many thanks to James Kerr for much of the information contained on this page.