13/04/1934 – Motherwell Times – New industry for Airdrie. Manufacture of concrete tiles and slates. Negotiations have been completed for the starting of a new industry at Airdrie in the manufacture of concrete tiles and slates for roofing purposes. The Springbank Tile Company, Ltd., a subsidiary of the Springbank Quarry Company, have acquired the old works of Messrs Arnott, and Co., boilermakers and engineers in Cairnhill Road Airdrie, which has been standing idle for several years. The company intends to utilise these works for the manufacture of concrete and coloured slates by a new process. Although a small portion of the works are to be used at the outset, and a comparatively small number of men employed, it is hoped to develop the enterprise to larger proportions as the demand for the new tiles increases.

06/04/1935 – Airdrie and Coatbridge Advertiser – King’s silver jubilee. We are informed by the Springbank Quarry Co Ltd and the Springbank Tile Co Ltd that they have decided to grant one day’s holiday with full pay to all employees on Monday 6th May. Any worker whose services should be required on that day will receive double-time payment for time worked. 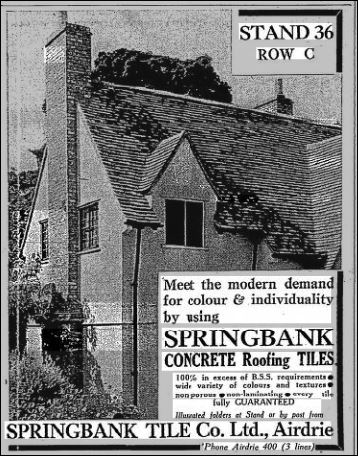 27/02/1936 – The Scotsman – Scottish building exhibition. A roof for any climate. A roofing tile which is used in Siberia and in West Africa is obviously likely to stand up to the Scottish climate. Such a tile is the product of the Springbank Tile Company (Ltd), Albert Tile Works, Airdrie. At their stand, the firm show a variety of their tiles, with a specimen roof to let the effect be better seen. The tiles, which can be supplied in any colour desired, are of concrete with an aggregate chiefly of whinstone and under test have been shown to have a transverse strength very much greater than that of several other tiles. They are guaranteed to be rain-proof and frost-proof, and their strength and permeability increases under the rigours of the Scottish climate.

23/01/1937 – Coatbridge Leader – A letter was submitted from the Springbank Tile Co., Ltd. Airdrie. inviting the Convener, the Burgh Surveyor, and others interested to visit their works to see their process of making the “Springbank” tiles. The Committee agreed that a visit should be made to the works on a day to be arranged early this year.

14/04/1937 – Coatbridge Express – New to Airdrie is the manufacture rooting tiles, an industry associated with Belgium and the Scandinavian countries from which in the past we have imported freely. Thinking that there might be an opportunity for a Scottish firm, the Springbank Tile Co.. Ltd., bought the buildings of a former engineering company and installed up to date British machinery for the production of concrete roofing tiles. Manufacture was begun in 1535, and, full of hope, the Company despatched samples to the Building Research Station. A most satisfactory report was received, the tiles being found one hundred per cent above the British standards specification. With such a recommendation behind them, it is disappointing to admit that at first orders were few. However, the completion of one or two good contracts soon demonstrated the worth of the new product, and orders are now plentiful. Indeed, the works are very busy as several burghs and counties have placed their orders with the firm. Now that the original product is launched, the Company has decided to place on the market a different type of tile suitable for flat roofs. New machinery has been ordered, and it is hoped that the new variety will be favourably received.