(Note – SBH – Does anyone have any information on this company. Was there a connection with the Bothwell Brickworks, Fallside Road, Uddingston?

1988 –  Construction News 18/02/1993  – Redland Bricks has sold its Cranleigh Brickworks to a management buy-in team led by businessman John Workman. Last year Redland agreed to sell two brickworks to help win clearance from the Office of Fair Trading to buy rival Steetley. The works is understood to have cost £3 million, less than originally cost to build. Steetley built the brickworks two years ago as a base in the South-East. Now Redland must sell Tilmastone, another former Steetley brickworks in the South-East to fulfil its OFT obligation. The Cranleigh works has a capacity of about 11 million bricks a year. Mr Workman said: ‘Cranleigh is an ideal purchase. It is a high technology, low-cost manufacturing unit based in an area were there is an inherent undersupply. In 1988 Mr Workman bought the Bothwell Park Brick at Wishaw, which he sold to Tarmac two years later 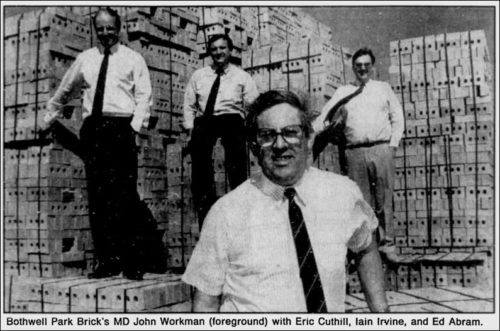 02/03/1990 – Aberdeen Press and Journal – Tarmac are to extend their brick manufacturing operations to Scotland, buying Bothwell Park Brick Company at Motherwell for £2.2 million.