12/08/1852 – Fife Herald – Prize drain tiles. Seafield Tilework. Mr Meldrum has on hand a large stock, especially of 1 1/2″ pipes and collars which from their low price at the work and the reasonable rate of railway charges can be sent considerable distances at a moderate cost. As the specimens exhibited at the Highland Society’s Show were selected from the ordinary sale stock, purchasers can depend on getting a first-rate article. Large pipes for ditches. Excellent common bricks and superior roof tiles. Kincaple by St Andrews 09/08/1852.

1853 – 1855 – ScotlandsPlaces – Seafield Brick and Tile Works. A large brick and tile work with extensive sheds a house two stories high for the steward to reside in and a large steam engine for making tiles &c. all in good repair. There is about 30 men continually employed at it, there is a single line of railway from it to the St. Andrews Branch for the conveyance of tiles &c. and coal for the use of the work. The property of Alexander Meldrum Esqr. Easter Kincaple.

17/12/1858 – Dundee, Perth and Cupar Advertiser – At Seafield Tilework, on the St Andrews Railway, there is a large stock of all the ordinary sorts of drain pipes, from 1 2/2″ to 12 inches diameter, of superior quality Articles made at this work gained the Highland Society Medal in 1852. Orders to be addressed to Mr Meldrum, Kincaple, by St Andrews.

10/10/1863 – The Scotsman – Accident at Seafield Brickworks. On Wednesday afternoon, a young man engaged at Seafield Brick & Tile Works, about 2 1/2 miles west of St Andrews got his hand lacerated by machinery to such an extent that amputation was rendered necessary. 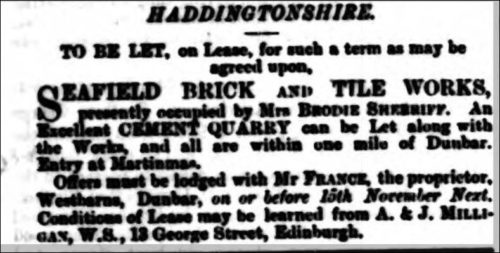 14/12/1888 – Haddingtonshire Advertiser – Westbarns. The labour outlook. Work is very slack in the district. The paper mills are almost idle. Sherriff & Co’s works doing little and as the Seafield Brickwork has been stopped for over twelvemonth and little likelihood of its resumption for some time and as there is a stock on hand likely to lat for a season or two. The present outlook for working men seems gloomy enough.

28/10/1927 – Dundee Courier – Estate of Easter Kincaple for sale …  including Seafield Brickworks, brickfield and managers house and 13 houses in Kincaple village … 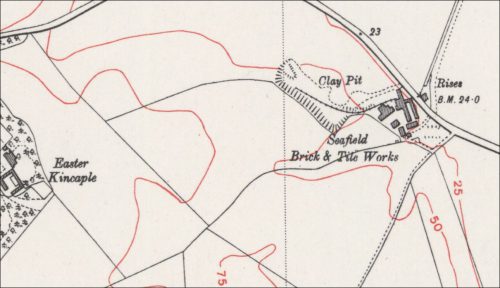 27/07/1842 – The Scotsman – Seafield Brick and Tile Works near St Andrews to let with immediate entry. The works lie about 2 miles from St Andrews, on the St Andrews-Cupar Road and are equipped for producing all usual sizes of field drain tiles, bricks and roof tiles … 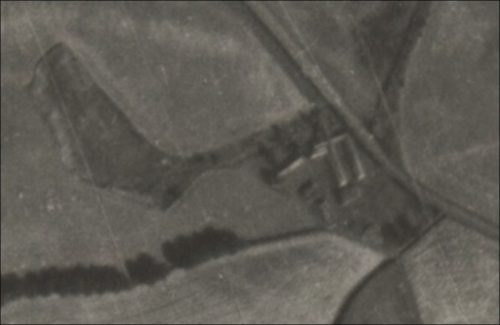 Below – 08/08/1945 – Brick shortage. Methil Brick Company have been working half time for 3 years (Resource issues due to men at war). Possibility of Kincaple Brickworks starting up?

06/12/1950 – Death of a businessman. Mr Thomas Wilson, Clova, St Michaels, near Leuchars, who carried on business at Seafield Brick and Tile Works, St Andrews, died yesterday. He was for many years an elder of Martyrs’ Church, St Andrews, and was a member of Masonic Lodge Earls Hall (1292) and R.A. Chapter St Michael’s, Cupar. He is survived by his daughter.

Seafield Mains was originally a farmhouse with outbuildings, a steading and a bothy (a bothy was a dormitory with a fireplace where the single bachelor farmworkers lived).  The name is also linked to the Seafield Pottery, Brick and Tile Works which came in to use around 1850 and closed in 1940. Here at Seafield, Thomas Wilson Senior became a good friend of Tom Watson (of golf fame) and in a book written by Watson’s son, mention is made of the fact that while holding a discussion over field drainage pipes which were made on-site, Watson decided that the drainage pipes themselves were the perfect size for a putting green hole and hence the current size of the holes in the ‘Old Course’.  The friendship between Watson and Wilson was strong. They also worked together with labourers and wives in Kincaple village wrapping golf balls.  The brickworks itself was located here on  Easter Kincaple in a field between Seafield Mains and the main A91 road into St Andrews.  It was sadly demolished around 1950. There were three significant local brickworks at that time, located at Seggie, Edenside, and Seafield.  Seggie was the earliest which was working in 1775.  Brick and tile making was a seasonal occupation much like farming, therefore, labourers worked on both the farm and the brickworks at certain times throughout the year.

In 1851 Alexander Meldrum of Kincaple employed 30 labourers.  Ten years later in 1861, his son David still employed 28 labourers and also ran the farm which was then made up of 400 acres.  One of the unique features of Seafield Brickworks was its ‘lye’ or flat-car narrow gauge track similar to what would resemble a small train track and this was linked to the main railway line which was known as the North British Railway.  The hand-propelled bogies (or mini carriages) were horse hauled over a long siding which crossed the main road and ran down to an exchange loading dock to meet the main railway line on the sea wall. The clay was dug in situ and Seafield had four kilns which were coal-fired. The coal was brought by rail to the site either from Dundee or the Radernie pit at Peat Inn.  In its day, Seafield flourished like many other brickworks because of field drainage and other agriculture improvements brought in at that time.  The introduction of government grants for land improvements, and drainage in particular resulted in brickwork prosperity.

There were other popular items produced as well as the bricks and drainage pipes such as milk coolers, pots and bowls.  There were also one-off unusual pieces discovered like a money box. 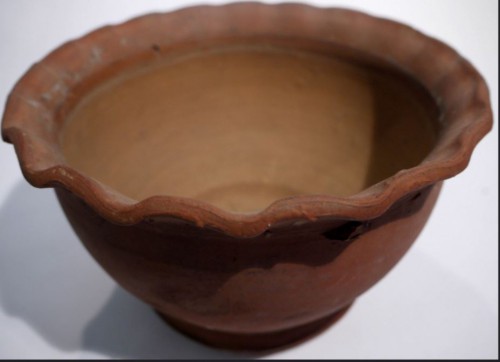 The following reference is for the Butter Wynd Pottery, Tayport, Fife – Sean and Christine Kingsley. Their contemporary country pottery is inspired by the traditional pottery of Britain, which was made using local clay and only a few other materials.

Sean digs clay from a location close to St Andrews, at the site of Seafield Pottery Brick and Tile Works. This is fairly unusual for potters to do this now. Once cleaned and prepared, it is made into lovely warm pots for the home; and Christine decorates some of them. Sean also makes garden pots, currently using a commercially mixed clay from Valentines. We are inspired by the old country potters and are interested in revisiting old ideas to see how they can be used today while keeping abreast of new ideas on sustainability.
Below – A plate created from Clephanton clay dug up at Clephanton Farm, Anstruther. 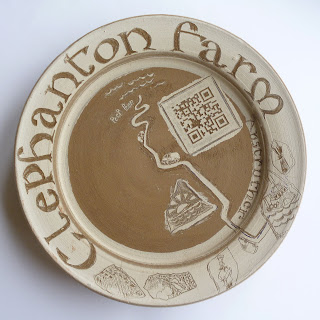