10/04/1873 – Fife Herald – Burner (first class) of experience wanted for a new brick and tile works shortly to be opened at Guardbridge near St Andrews. Must have a complete knowledge of all the branches and be able, if required, to take general superintendence. References as to character and ability to be addressed “A” 69, Office of this paper.

14/10/1875 – Fife Herald – The subscribers would invite the attention of landowners, farmers etc to their stock of drain pipes. They can with confidence recommend them on being a first-class article. In sizes from 1 1/2″ to 15″ diameter. Price lists on application and goods forwarded to any Station on NB or Caledonian Railways. McLean & Cunningham, Eden Brick and Tile Works, Guardbridge.

17/05/1877 – Dundee Courier – Eden common bricks. These superior bricks will be in the market in a few days. Quotations made for large or small quantities at the lowest possible prices. Apply John McLean & Co (sole agents for Dundee), No 1 South Union Street.

07/03/1878 – Fife Herald – Men wanted at Eden Brickwork, Guardbridge for kiln emptying and pipe making. Good wages. Apply at once to the works.

01/03/1881 – Dundee Courier – Dundee Sheriff Court – Sheriff Moncreiff has just issued an interlocutor confirming the decision of Sheriff Cheyne in the action at the instance of Messrs P. & C. Cunningham, brick and tilemakers, Guardbridge, against Mr William Nicoll, lime merchant and shipowner in Dundee.  The interlocutor and note are as follows: “Dundee, 26th February 1881.-The Sheriff having avizandum considered the debate on the defender’s appeal, together with the proof, and the whole process, dismisses the appeal; affirms the interlocutor of 22nd January 1881, appealed against, and decerns.  Finds the pursuer entitled to additional expenses, allows an account thereof to be given in, and remits the same when lodged to the auditor of Court to tax and report. (Signed)  “Henry J Moncrieff ”

Note.-The case was most anxiously and fully argued on behalf of the appellant, but after careful consideration, the Sheriff has come to the conclusion that the interlocutor appealed against is well-founded in all respects.  The reasons given in that judgement in the Sheriff Substitute’s note fully express the Sheriff’s views on the evidence.  In regard to the pursuer’s claims, almost the only point argued by the defender related to the charges in the account sued on for the bricks, supplied between 25th March and 28th April 1880, both inclusive, to Mane & Myles, the contractors for the Asylum buildings.  It was admitted that the defender ordered the eight wagon load of bricks charged for under dates 16th to 23rd March, both inclusive: but it was contended that there was no evidence of his having ordered the rest of the bricks furnished in March or April, or at least it was only proved that he had guaranteed payment and that as in this action he was sued not as guarantor but as having ordered the bricks himself, the pursuer was not entitled to recover.  It is certainly unfortunate that as this order was put in writing at the time it was given, that writing is now forthcoming, but the Sheriff agrees with the Sheriff-Substitute that there is sufficient evidence to prove that the bricks in question were furnished on the credit of the defender as full debtor and that this is brought home to the defender by the invoices which were regularly furnished to him.  Add to the supplies in May there is no dispute; when those bricks were provided, the defender had taken over the contract for the Asylum buildings, and the furnishings were made upon his order.  Then as to the defender’s counterclaims, the stone and coal accounts are prescribed, and it was, therefore, necessary to refer these matters to the oath of the pursuer, Peter Cunningham.  that oath, which was taken on 10th January 1881, appears to the Sheriff to be negative of the reference as to both accounts.  A more complicated question arises in regard to the defender’s claim for surface damages, which he claims right to set off against the pursuer’s claim as assignee of David Edie.  The Sheriff thinks that the defender has failed to establish this claim, and he is quite satisfied with the grounds on which the Sheriff-Substitute has refused to give effect to it.  It may be noticed that the Sheriff-Substitute’s interlocutor is pronounced without prejudice to the defender’s right to make good any claim which, as David Edie’s assignee or otherwise, he may hereafter be able to establish in respect to clay dug by the pursuer since 3rd March 1880. (Intl.)     “H. G. M.” Pursuer’s agent-Mr A.I.  Agnew; defender’s agents-Messrs Pattullo & Thornton. 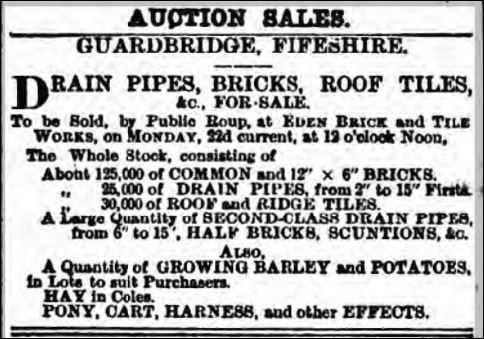 11/05/1883 – Dundee Advertiser – Eden Brick and Tile Works  – The subscribers will receive written offers for the purchase of these works etc by private bargain all as formerly advertised. The greater proportion of the price may lie in the security of the property. Alexander Tosh, Accountant, Dundee

20/02/1885 – Dundee Advertiser – Eden Brick and Tile Works and land for sale. There will be a exposed for sale by public roup withing the office of Shield and Kyd, solicitors, 8 Euclid Street, Dundee on Friday  20th day of February 1885 at one o’clock afternoon ( unless disposed of by private bargain), the works well known as Eden brick and tile works, Guardbridge, Fife together with the whole working plant, gear and unexhausted clay. Also a field of arable land. The machinery is suitable in every aspect and in excellent working order and the clay is admirably adapted for both brick and pipe making. The railway siding gives easy and ample facility for loading. To ensure a sale the subjects will be exposed at a low upset price … 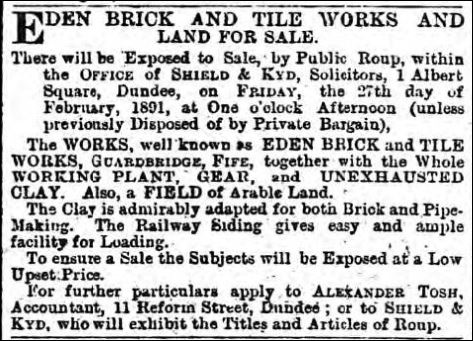 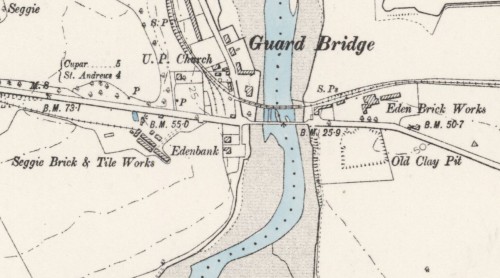 1928 – The 1985 publication ‘A survey of Scottish brickmarks’ suggests the works may have been in use in 1928 and run by Thomas Wilson and Son? 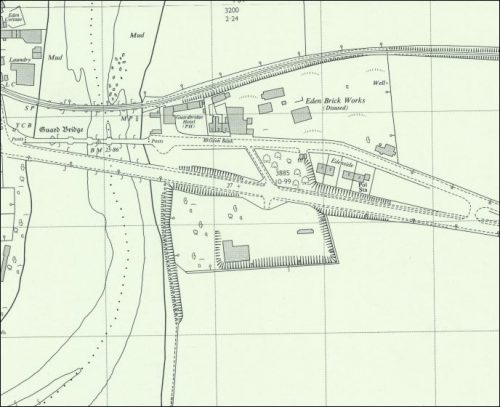