The Seedhill Brickworks may be one of the same as the Ralston Brickworks.

28/12/1894 – Glasgow Herald  – Proposed brickwork at Williams burgh. A meeting of feuars and others resident in Williamsburgh district was held last night in the Allison Memorial Hall for the purpose of considering what action should be taken in connection with the proposed erecting of a brickwork on that portion of the Ralston Estate situated between Seedhill Road and the Glasgow Road. Ex-Bailie Goudie presided. In the course of the proceedings, it was stated that the erecting of the brickwork could be injurious to the best interests of the locality and that its presence would not only be offensive to the present feuars and residents but would also be prejudicial to further feus being taken off on the estate. A memorial drawn up by Mr Kerr, writer, for presentation to Mr Richardson, the superior, was approved of, and a committee was appointed to wait on Mr Alexander McAllister, writer, Paisley (Mr Richardson’s agent) and submit to him the views of the meeting in connection with the proposed erection. The opinion was pretty generally expressed that Mr Richardson would not give his consent to the brickwork being erected if he found that the feuars and tenants on the estate were unanimously opposed to it.

15/01/1895 – Glasgow Evening Post – Dwellers in Williamsburgh pray the brickwork which it is proposed to favour them with will be vetoed. They say it will cause a nuisance.

Below – 26/01/1895 – Paisley & Renfrewshire Gazette -Robert Morton applies to the Paisley Dean of the Guild Court for authority to erect an 8 chamber kiln and offices in connection with a proposed brick factory in the new street between Glasgow and Seedhill Roads. 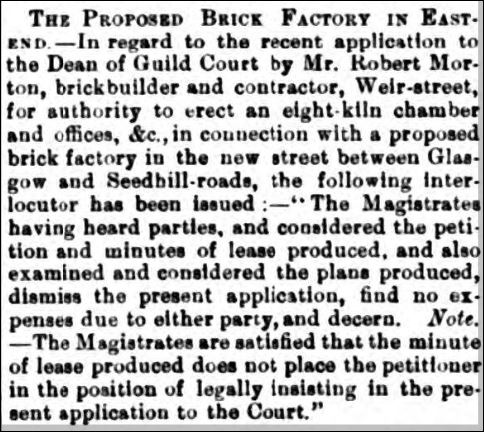 21/02/1895 – Glasgow Herald – Paisley – Dean of Guild Court – A motion was submitted by Mr D A Morrison, writer, on behalf of Robert Morton, brick manufacturer, asking the court to resume consideration of his petition for authority to erect a brick manufactory at Seedhill Road and to grant the prayer of the petition. The lining was granted.

Below – 1909 – Seedhill Brick and Tile Works. The works are not depicted in 1896. The claypit and tramway are still depicted in 1938 but the buildings are gone. 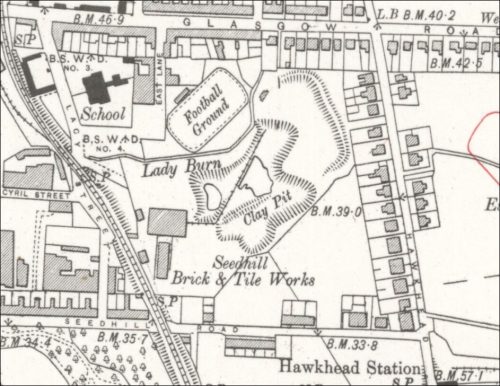 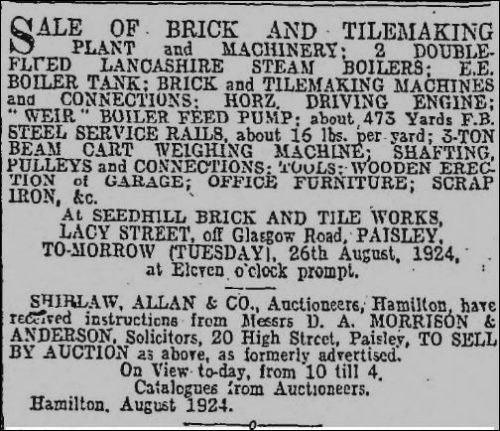