The Ralston Brickworks may be one of the same as the Seedhill Brickworks.

26/01/1895 – Paisley and Renfrewshire Gazette – Proposed new brick factory in the East End. In regard to the recent application to the Dean of Guild Court Mr Robert Morton, brick builder and contractor, Weir Street, for authority to erect an eight-kiln chamber and offices, &c, in connection with a proposed brick factory in the new street between Glasgow and Seedhill Roads, the following interlocutor has been issued: – “The Magistrates having heard parties, and considered the petition and minutes of lease produced, and also examined and considered the plans produced, dismiss the present application, find no expenses due to either party and decern. Note – The Magistrates are satisfied that the minute of lease produced does not place the petitioner in the position of legally insisting in the present application to the Court

18/05/1895 – Glasgow Herald – The following Public Companies were registered in Edinburgh during the past week.  The Ralston Brickmaking Company (Limited) – No 2013 – to acquire land on the Estate of Ralston, Paisley and to carry on the business of brick and tile makers. The capital is £10,000 in £10 shares and the subscribers are – A. Logan, coal merchant; J. F. Baird, manager; W. Wilson, manufacturer; J. Robertson, manufacturer; R. Baird, manager; R. Morton, brick builder and A. McAllister, solicitor all in Paisley. 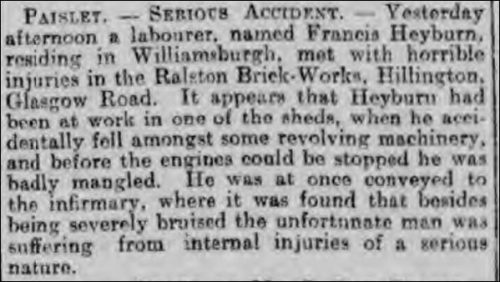