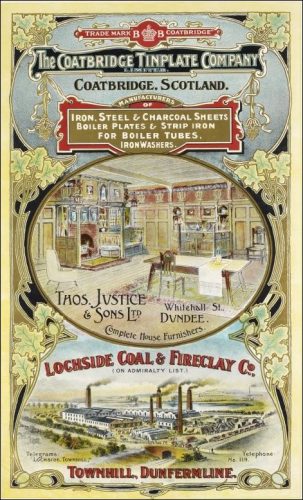 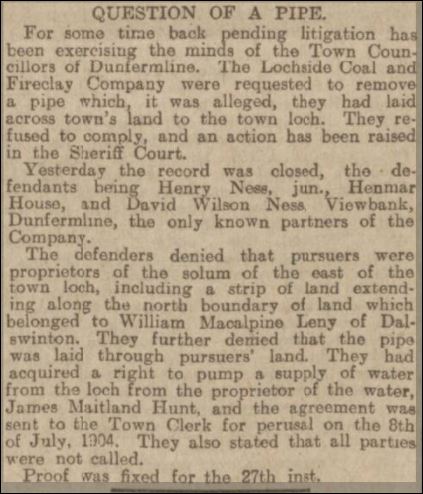 2/11/1906 – Lochside Fife Lochside Coal & Clay Co – George Ritchie,  35,  Miner. Roof Fall.  The blaes in the openings of the old stoop and room workings is worked for the purpose of making bricks, and while the deceased was shovelling, an overhanging piece of the blaes fell and fatally crushed him. The part did not seem to be sufficiently timbered.

21/09/1907 – Dundee Courier – At a private meeting of Dunfermline Town Council yesterday it was intimated that Messrs H & D Ness, Lochside Coal and Fireclay Company had agreed to pay 1d per ton for the refuse at a bing at Muircockhall, which they intend using in the making of bricks. (According to this article the Lochside brickworks had previously offered 1/2d per ton which had been rejected – 20/09/1907)

27/11/1909 – Dundee Courier – Lochside Coal & Fireclay Co Ltd, Lochside, Townhill near Dunfermline. Capital £40,000 in £1 shares of which 20,000 are preference and 20,000 are ordinary. A private company formed to adopt an agreement by Lochside Coal and Fireclay Company and to carry on the business of coalmasters etc. Subscribers:- Henry Ness Jun, Coalmaster, Townhill and David William Ness, brick manufacturer, Lilybank, Dunfermline. 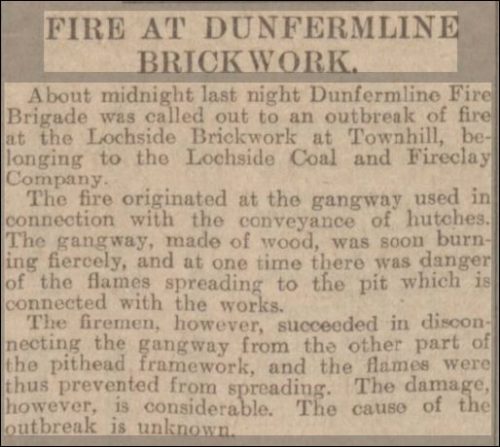 Below – 24/09/1926 – Dundee Courier – Men charged in August with preventing miners from gaining access to the Lochside fireclay mine. Found guilty and sent to prison. 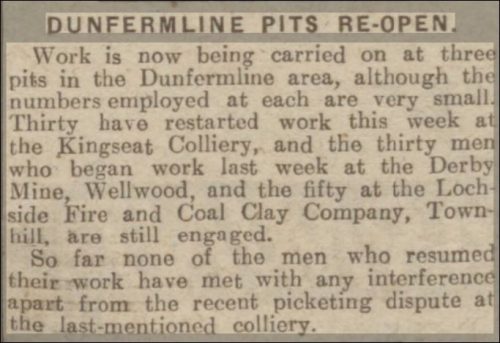 Below – Oct 1934 – Photo forwarded by George Hunter. Source Wheels around Dunfermline and West Fife by Alan Brotchie. Lorry being loaded with bricks from the Lochside brickworks. 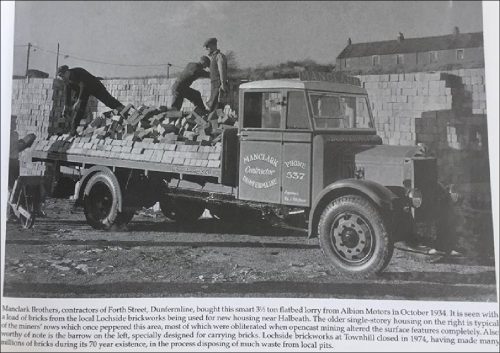 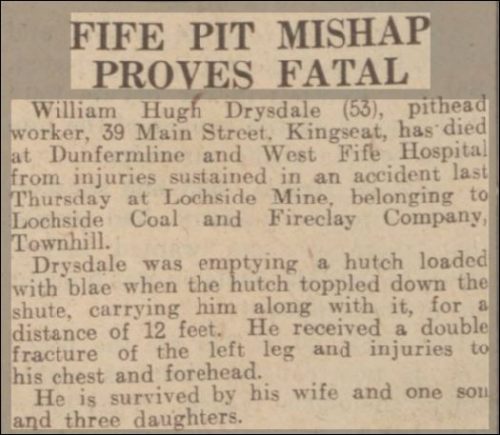 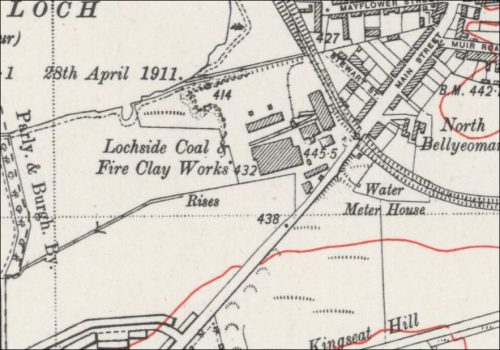 25/03/1938 – Dundee Courier – Extension to Fife brickworks. Lochside Coal and Fireclay Company, Ltd., were granted a warrant at Dunfermline Dean of Guild Court yesterday to extend their existing brick kilns at Lochside Brickwork, Townhill. It was stated by the burgh engineer, Mr D. H. Shaw, that the company were adding four kilns and altering their method of use of the existing kilns. The plans were passed subject to the approval of the town planning authority.

20/10/1938 – Dundee Evening Telegraph – Another extension at Fife brickworks. Lochside Coal and Fireclay Company, Lochside Brickwork, Town hill, obtained a warrant at Dunfermline Dean of Guild Court today to erect four kilns and a chimney stalk at their works. Mir D. H. Shaw, burgh engineer, said there was a petition some time ago to erect additional kilns, and it was now proposed to erect four more. The chimney stalk would be 80 feet high. Submitting his annual report, Mr Shaw said the cost of work sanctioned by the court amounted to £153,973 compared with last years figure of £170,482 and £204,415 for the year 1935-36. The two previous years were exceptional because of the big jobs undertaken. Actually the total this year was well above the average for the last ten years. Of the total, £94,460 had been work for the town council. 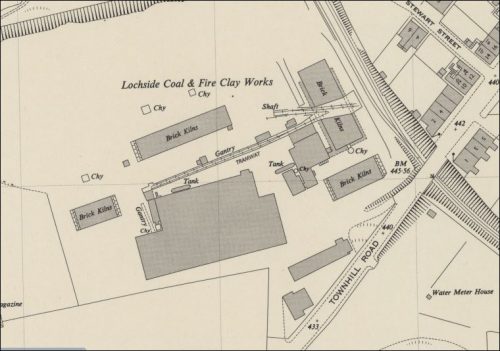 Below – c. 1960s – 2 photographs taken by Bob Leiser from his bedroom window in Townhead Road. 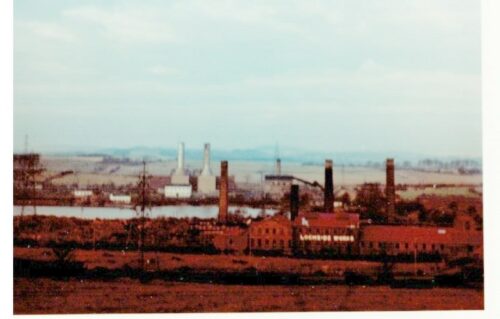 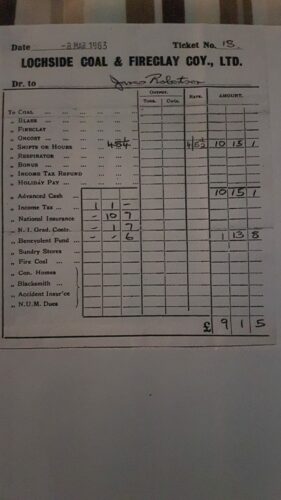 28/11/1964 –  Dunfermline responds to “more bricks” appeal – feature on brickmaking – Wellwood Brick Co, Lochside Coal and Fireclay, Lassodie (p22). (Note – SBH – I appear to have forgotten to record the source of this – does anyone know?!)

1964 – Hepworth Iron Company ( HIC ) – A subsidiary company – The Lochside Coal and Fireclay Company Ltd, has acquired the whole of the issued shared capital of Loudon and Russell Ltd. of Newmains, Wishaw, Lanarkshire and also the fixed assets of the Cumbernauld Pipeworks from the Glenboig Union Fireclay Company Ltd.

Below – c. 1970 – The entrance to the Lochside Works off Townhill Road. (Many thanks to Drew Mitchell for forwarding the photograph). 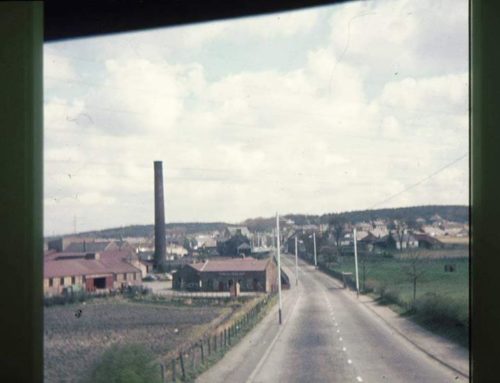 1975  – The 1985 publication ‘A survey of Scottish brickmarks’ suggests the works closed around this time.

Below – Unknown date – Believed to be the Lochside Fireclay Works. 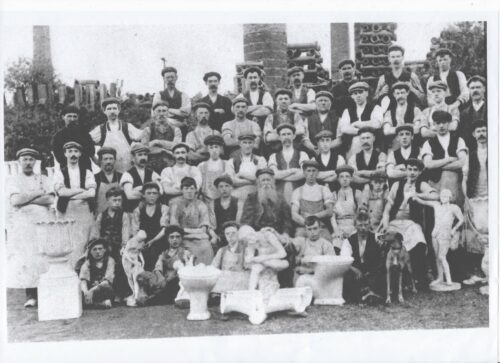 Below – Unkown date but after 1908  – Lochside Fireclay Works and Appin Brickworks advert. 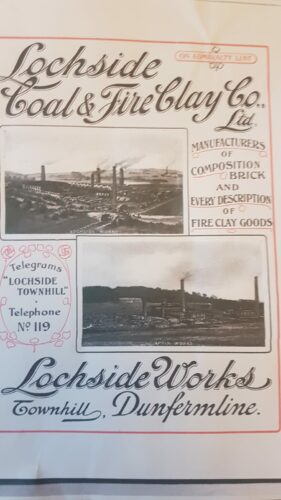